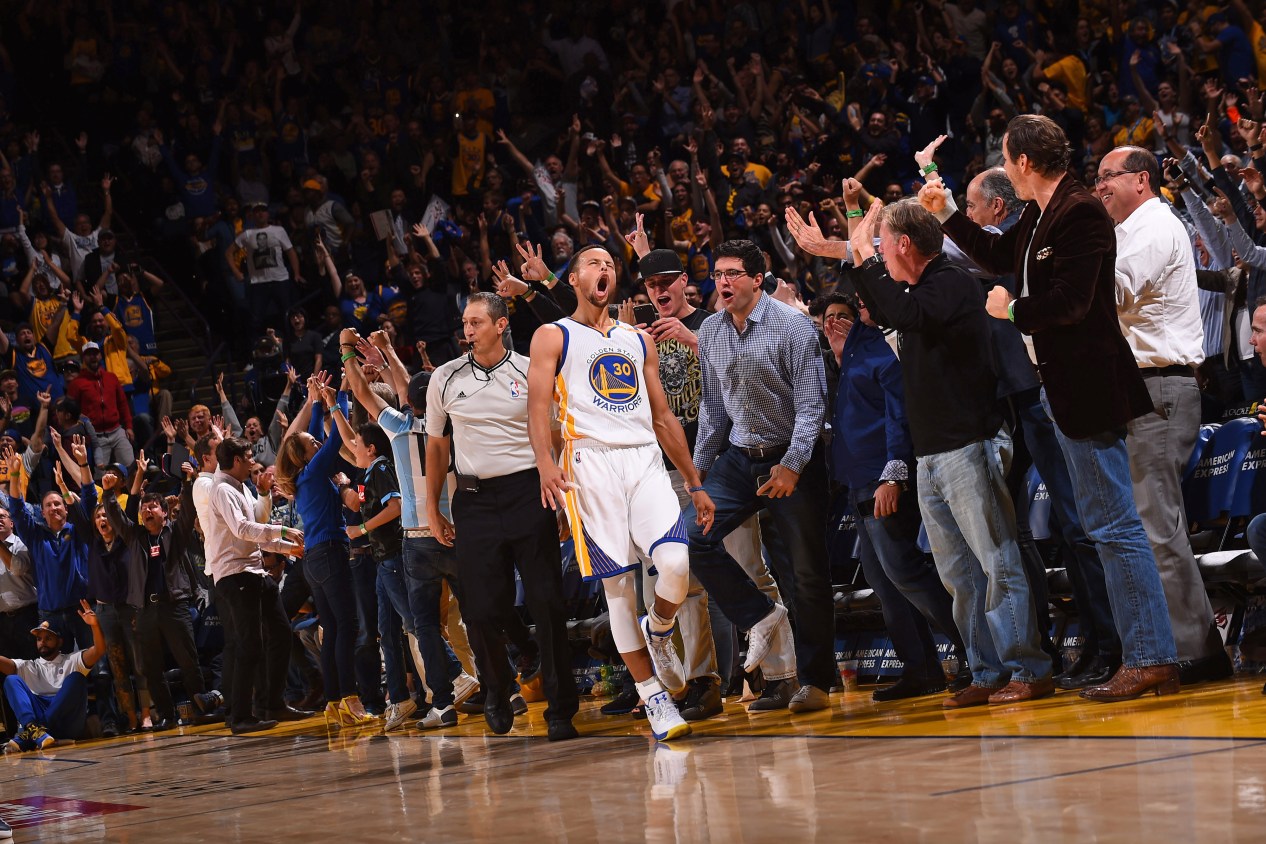 Other than two aimlessly flying Pelicans, Kevin Durant may have had the best view of NBA history on Monday night that he didn’t realize was taking place.

Golden State Warriors sharpshooter Stephen Curry took a left-handed pass from teammate Draymond Green and began his trademark quick shooting motion behind the 3-point line of an oddly contested contest. New Orleans Pelicans guard Tim Frazier tried to recover for the block on Curry after being screened by Durant while his teammate Solomon Hill left Green in hopes of doing the same to stop history, too. With a challenging Pelicans player in the air on each side, Curry tossed up a 3-pointer in the nick of time and backpedaled as it went in for an unprecedented 13th time.

A jubilant Curry quickly took out his mouthpiece and began to shimmy and bob his head. The Oracle Arena crowd went into hysterics in Oakland, California. And a confused Durant looked up at the Jumbotron to learn all the fuss was over Curry setting an NBA record for 3-pointers.

“It just happened so quickly,” Durant told reporters. “I looked up and it was an NBA record, and I’m like, ‘Wow.’ I didn’t realize what was going on, it happened so quick. He got us going when we were struggling shooting the ball and scoring points. He kind of broke their backs with some of the shots he was hitting.

“Coach called the plays for him. We set the screens for him. And he finished the shots. It was a great night.”

The great night for Curry, Durant and the Warriors (5-2) could have actually been their third early-season nightmare.

Much ado for great reason has been made about these Warriors since Durant joined forces with three fellow NBA All-Stars — Curry, Klay Thompson and Draymond Green — in the offseason. The latest NBA superteam appears to be already either loved or hated for Durant’s decision to join a Warriors squad that dispatched his former Oklahoma City Thunder in the Western Conference finals after blowing 3-1 series lead. So far, it hasn’t been so good as Golden State opened with a blowout home loss to the San Antonio Spurs and lost to the rebuilding and wet-behind-the-ears Los Angeles Lakers by a stunning 20 points on Nov. 4.

Potentially making matters extremely worse would have been a loss to the winless Pelicans, who are now an NBA-worst 0-7 after the 116-106 loss to Golden State. New Orleans held a 73-72 lead with 4:14 left in the third quarter and was in reach of an upset in the fourth quarter.

Curry, who is already perhaps the NBA’s greatest 3-point shooter of all time, makes 3-pointers with the ease that others make layups. The two-time NBA MVP previously shared an NBA record for most 3-pointers made in a game with ex-Lakers guard Kobe Bryant and ex-Warriors forward Donyell Marshall. Curry also had nailed a 3-pointer in a league-record 157 straight games until shooting blanks on all 10 tries in the loss to the Lakers three days earlier.

Curry responded by going back to the lab to fine-tune his art of 3-point shooting with the usual aid from Warriors assistant coach Bruce Fraser before the arrival of the Pelicans.

“I was hard on myself the last few days in practice and I had some pretty good shooting sessions,” Curry told reporters. “I don’t overreact to games like that where I go 0-for-10 or 2-for-12, or whatever it is. My process is the same.

“I had another level of focus the last few days just trying to get a rhythm back and to see the ball go in. Me and our assistant Coach Q [Fraser] had a couple good days of work, and thankfully it translated to some success.”

It’s quite possible that Curry could have broken the NBA record for 3-pointers made in a game at some point over the past two seasons. Regular blowout wins, however, often kept him sidelined for much or all of the fourth quarter of games when he was blazing hot from behind the 3-point arc. With the Warriors’ lack of expected dominance on this night, the Pelicans provided the challenging ripe atmosphere for Curry to make history.

While Durant didn’t realize Curry was on pace to break the NBA 3-pointer record, the record-setter certainly knew. Curry said he began paying attention to the possibility of breaking the record around the time he hit his ninth or 10th 3-pointer. Curry also finished four points shy of reaching 50 points with his season-high scoring night, after missing only four of 17 3-point attempts in 35 minutes.

“It was nice to make the first one after the last game, and I was able to get some open looks early and often,” Curry said. “Good things happened. The last two were pretty special. The flow of the game was kind of close and I think I made one or two tough ones. The last one was more of the heat check to see if it’d go in. Thankfully, it did.”

A far from fazed Warriors coach Steve Kerr described Curry’s record night as “quite a show” to reporters.

“Not at all surprising with the way Steph bounces back from bad nights. Maybe not 13 of them, but he’s done it throughout his career where he comes right back off of a bad game and lights it up. It didn’t surprise me,” Kerr said.