The NFL draft that changed the game for black QBs: ‘Three guys who were like me’

Twenty years ago, the seeds were sown for the Year of the Black Quarterback

MIAMI – Three young quarterbacks sat together during the final week before the 1999 NFL draft, reveling in having a rare moment of free time. A scheduling glitch had put them all in the same place for the first time in a long stretch, and Donovan McNabb, Akili Smith and Daunte Culpepper seized the moment.

There was catching up to do. They shared stories about their experiences interviewing with clubs throughout the pre-draft process, about their never-ending media commitments and, most importantly, about their hopes and dreams. But what made this meeting different was what came next: a discussion about how, together, they could help change the NFL for the better.

“I remember we were all kind of sitting there, laughing and joking, and the question was brought up: ‘What if we all go high in the draft?’ ” McNabb said recently. “We just started talking about what that would mean for all of us to be [first-round picks]. We thought it could mean something. For the NFL, and for a lot of young African American players who wanted to play the position, and were told for so long that they couldn’t, we thought it would mean something.”

On Sunday in Super Bowl LIV, Kansas City Chiefs superstar Patrick Mahomes will punctuate the Year of the Black Quarterback, becoming only the seventh African American signal-caller to guide a team to the championship game in the NFL. And if Mahomes leads the Chiefs over the San Francisco 49ers at Hard Rock Stadium, he’ll be the third black passer to win a Super Bowl, following Doug Williams and Russell Wilson.

But the seeds for this historic year, which occurred as the NFL commemorated its 100th season, were sown 20 years ago in April at New York City’s Madison Square Garden. For the first time in NFL history, three black quarterbacks – McNabb, Smith and Culpepper – were selected in the opening round of the draft. Not to mention, three other black quarterbacks – Shaun King, Aaron Brooks and Michael Bishop – were taken in later rounds. That seminal event signaled to the world that black quarterbacks had overcome a narrative that never fit the facts. For most of the game’s history, black quarterbacks were not considered smart enough, tough enough or courageous enough to lead.

“We did sit there and discuss how we could be pioneers and change the position,” Smith said on the phone. “In my opinion, the way I’m looking at it now, I believe we were ahead of our time.”

To be sure, there were other monumental milestones for black quarterbacks before 1999. Many involved Williams. He’s joined on the list by other pioneers, men who persevered and kicked down doors. It wasn’t until 1999, however, that the league’s thinking truly shifted on how much it valued black quarterbacks in the draft, the foundation of roster construction.

Warren Moon, the only black passer in the Pro Football Hall of Fame, recalled how he swelled with pride while hearing the names of McNabb, Smith and Culpepper called out in the first round. He knew something significant had changed.

“What we’ve seen this year, the great seasons that so many of these young guys have had, is the result of getting more and more opportunities over the years, and you can really point to 1999 as a year when you knew something was different,” said Moon, who went undrafted in 1978. “You’ve got to understand: It was unheard of to have three black quarterbacks go in the first round. So to have teams invest so much in us, at the top of the draft … it was definitely a new day.”

Not that it was unexpected.

In the run-up to the draft, McNabb, Smith and Culpepper were all considered top-rated prospects. McNabb was the biggest star of the group. A three-time Big East Conference Offensive Player of the Year at Syracuse, McNabb was taken second overall by the Philadelphia Eagles. Smith – the Pacific-10 Conference’s 1998 Offensive Player of the Year – was in the running to be selected first by the Cleveland Browns despite playing only two seasons at Oregon. The Browns selected Kentucky’s Tim Couch instead, and Smith wound up going third to the Cincinnati Bengals. Then there was Culpepper, from the University of Central Florida. Although not as highly rated as McNabb and Smith, Culpepper nonetheless went 11th to the Minnesota Vikings.

“It was definitely special, no doubt,” McNabb said. “Once our names were called, we were very excited. Obviously, we were excited for each other, but also for so many of those kids who were coming behind us. They saw the three of us all go in the first round. What do you think that did for kids who looked like us?”

According to Jason Campbell, it did a whole lot.

Then a 17-year-old quarterback at Taylorsville High in Taylorsville, Mississippi, Campbell had a keen interest in the 1999 draft.

“It was just really encouraging to see all those guys go that high,” said Campbell, a 2005 first-round pick who started 79 games for five NFL teams over nine seasons. “You knew that the NFL saw they had the potential to play the game at a high level. That was the only thing that mattered. And it was three. Three guys who were like me.”

Reid, who will make his second Super Bowl appearance as a head coach with Kansas City, is a link to that 1999 draft. He is also back on the NFL’s biggest stage, at least in part, because he had 1999 on his mind when he drafted Mahomes.

After the Chiefs moved up in the 2017 draft to select Mahomes with the 10th pick, McNabb called Reid, who also worked with Hall of Famer Brett Favre while serving as a Green Bay Packers assistant, to pick his brain about the decision.

That someone, of course, was McNabb, who is not surprised by the success Mahomes is having under Reid.

“We see how comfortable Mahomes is in Andy’s offense, and what a great platform Andy is creating for him. So much of it, for a quarterback to be successful, is being in the right system.”

In Cincinnati, Smith never found a good match. Out of the league by 2002, Smith finished his NFL career with a record of 3-14.

“Back then,” Smith said, “(NFL coaches) were really adamant about developing the pocket passer, keeping everyone in the pocket. … None of us were running 4.2 [in the 40-yard dash] like Lamar (Jackson). But we could have been doing the RPO stuff [run-pass option] some of the zone-read stuff way back in 1999. All of the time, I think about how things could have been different if (coaches) would have done for me what I see Baltimore did for Lamar.”

Culpepper, who could not be reached for this story, fared better. A three-time Pro Bowler with the Vikings, Culpepper led Minnesota to the playoffs twice and had a few big seasons statistically. He went on to have an 11-year career but never regained top form after leading the league in completions and yards passing during the 2004 season.

Williams, who had an outsize role in changing much of the thinking, albeit slowly, about whether black men could win from the pocket in the NFL, said the varying degrees of success McNabb, Smith and Culpepper experienced in the league doesn’t diminish the overall importance of their impact as a group. In 2001, for example, Michael Vick became the first black quarterback to be drafted with the first overall pick. 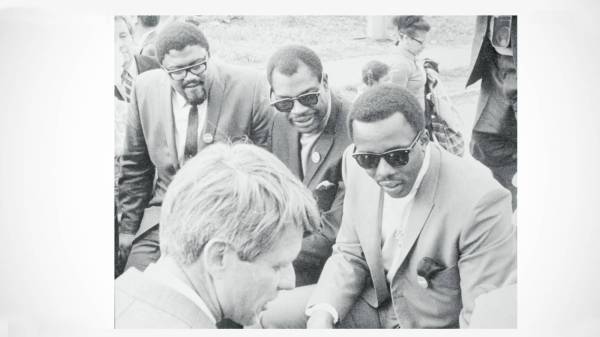 “All the top picks are not going to be what you like for them to be. That’s just the way it is,” said Williams, the first black quarterback selected in the first round of the NFL draft back in 1978, as well as the first to guide a team to a Super Bowl victory and win the game’s MVP award.

“But what those guys did, what they showed, was that the NFL was looking at things with more of an open mind. So now you look at it, these teams won’t hesitate to draft [multiple black quarterbacks] in the first round. Look at what we had in the [divisional round of the NFC and AFC playoffs]. Four quarterbacks out of the eight, 50% of the quarterbacks, were African American quarterbacks. That’s about opportunity. It’s about guys getting opportunities, some guys succeeding and some guys not, but getting the same opportunities as other people to try. That’s a good feeling. It shows we’ve come a long, long way.”

There’s still plenty of road ahead, though, as black quarterbacks appear poised to lead the NFL into its next 100 years. And if Mahomes delivers in the biggest test of his nascent career, don’t be surprised if a whole lot of black folk party like it’s 1999.