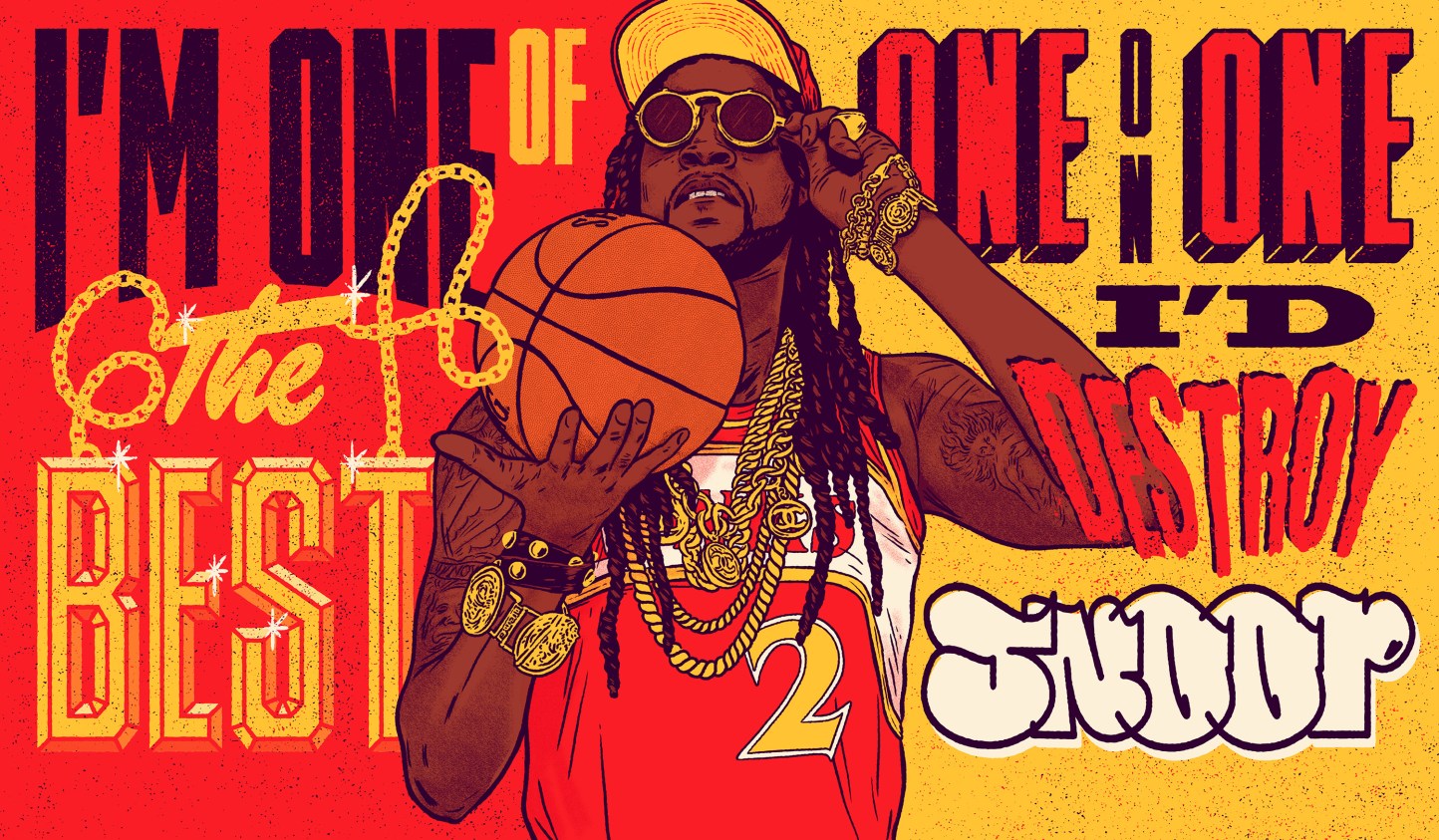 We checked out whether the ‘Based on a T.R.U. Story’ and ‘Watch Out’ rapper really could ball in high school and college

From singer Brian McKnight to actress Gabrielle Union to rapper Master P, singers, actors and rappers have often bragged about their past athletic accomplishments. #ShowMeTheReceipts, a monthly feature at The Undefeated, will authenticate those declarations. In this month’s installment, we verified rapper 2 Chainz’s receipts.

Darrick McGriff went over to Tauheed Epps’ home to check out something that may have needed repair. As he made his way through the house, McGriff saw a basketball. He knew Epps, more famously known as rapper 2 Chainz, had a basketball court outside. One thing led to another, and McGriff, the leading scorer for Alabama State his junior year when Epps joined the basketball team as a freshman in 1995, found himself shooting around.

“Tauheed said, ‘You know what, Beaumont? You still got it in you: Still can’t walk by a basketball without picking it up,’ ” McGriff, a Beaumont, Texas, native recalled. “I said, ‘Which one of us can?’ ”

It must have been August, as it was sweltering that day in Atlanta. The old Hornets teammates decided to put up a few shots, and then it took a competitive turn, becoming a game of H-O-R-S-E. It started off friendly, but then a wager got placed here and there and it became more than just fun and games. Ultimately, though, the house won.

“I guess I’ll say it on the record,” the 43-year-old McGriff mused, “I kind of let him win. You know, I didn’t want to go to his house and do that to him. I want my brother to invite me back.

Before Epps was a 19-time BET Award nominee, five-time BET Award winner, six-time Grammy-nominated artist and 2012 winner of the Soul Train Music Awards‘ best hip-hop song of the year, he won a Class AA state championship as the sophomore sixth man on the North Clayton High School basketball team in 1993.

On the court, he was known for his lanky frame, mesmerizing ball-handling skills, ability to play all five positions (if need be) and for his wet jump shot. Off the court, McGriff said, Epps was known for his propensity to call nearly everyone “Shawty” with that oh-so-recognizable Atlanta drawl, and for his casket-sharp wardrobe. If someone walked into Epps’ and Robert Jackson’s college dorm room, they might mistake it for a Polo Ralph Lauren store.

Jackson, who has been friends with Epps since playing alongside him for two years on the North Clayton varsity team and two seasons at Alabama State, took how much Polo they wore a step further.

“The Polo belt, boot, chino khakis, socks, jacket, and then that’s for the winter,” Jackson chuckled. “For the spring, you needed some blue jean shorts, shirt, skippers [no socks], hat, you had to have Polo towels … your sweatsuits had to be Polo, your track pants … you had to be Polo’d down.

The 6-foot-5 Epps went to Alabama State after Division I schools such as the University of Memphis showed interest. Alabama State already had Jackson, a guard, on its team, and in recruiting him, the Hornets staff got a chance to see Epps during his junior season.

Epps played in 35 games for Alabama State from 1995-97 and averaged 2.8 points, 1.5 rebounds and 0.5 assists. In McGriff’s final game, it was Epps who stole the show when the team played against Alcorn State. In 10 minutes, the future DJ, rapper and periodic actor scored 14 points and collected seven rebounds.

“I was the leading scorer, so everyone expected me to take the lead, but he was the high scorer in my last game in the Southwestern Athletic Conference tournament,” said McGriff, who is now a contractor in Beaumont. ” … He was kind of all over the place when it came to defense, ’cause he had long arms, had some good steals, went coast to coast. He hit a few 3s and just had an all-around good game.”

Epps has reinvented himself several times since graduating from college. After four nominations, he finally won his Grammy award (best rap performance) for his feature on Chance the Rapper’s “No Problem,” alongside Lil Wayne.

“Everybody has their trials and tribulations and stories of where they came from, but it’s very, very humbling for me,” 2 Chainz said during his Grammy acceptance speech in February. “I got my first Grammy today. I’ve been doing what I love doing. You know, [I’ve been] working my a– off. There’s been a lot of long nights and short days. There’s been a lot of hard work, a lot of long prayers, but let me tell you, it don’t stop. So, like I say, each and every day I try to get better than I was the previous. Shoutout to my crew, my family in here and the label.”

Almost two weeks later, Epps blessed music fans with his 2.0 version of his 2016 song, “Good Drank,” featuring Gucci Mane and Quavo from Migos. Gucci Mane and Epps appeared on The Tonight Show Starring Jimmy Fallon accompanied by a “trap choir” to perform the newer rendition of the song, which replaced Quavo’s hooks but maintained his ad-libs.

The appearance on the late night show was succeeded by Epps releasing “Good Drank 2.0 (Trap Choir Version)” on his SoundCloud for the masses. All this is just an appetizer for Epps’ much-anticipated new album Pretty Girls Like Trap Music, which is rumored to include artists such as Justin Bieber and Drake in the mix. In January, a photo of Epps and Drake in the studio was posted on Epps’ Instagram account.

A choir singing Quavo's hook on "Good Drank" for 2 Chainz is beauty you didn't know you wanted but definitely needed pic.twitter.com/tnrUnZRB74

just dropd some new on my soundcloud chek it out Good Drank 2.0 Trap Choir Version (as seen on Jimmy Fallon) https://t.co/cK50RVrw1l

Originally, he was a member of the Playaz Circle duo with Dolla Boy. Known as “Tity Boi,” Epps signed with fellow Atlanta artist Ludacris’ Disturbing tha Peace label, which is under the Def Jam/Universal tree, and in 2007 he gained mainstream recognition after his collaboration with Lil Wayne on “Duffle Bag Boy.”

In 2011, the College Park, Georgia, native changed his name from Tity Boi to 2 Chainz, and the following year he released his debut album, Based on a T.R.U. Story, which peaked at No. 1 on the Billboard 200 its first week.

“I loved it because it was his own different tune. He and Ludacris have a whole different kind of flow, so when Tauheed was able to start branching out into his own, that was the coming of Tauheed at that point. … He was going to be a down South, Georgia rapper and bring his own twang to it.”

Since that point, 2 Chainz has dusted off his hooping skills a few times at Philips Arena, where the Atlanta Hawks play, to challenge former Hawks and NBA legend Dominique Wilkins. The first time was in 2015, when 2 Chainz beat the Hall of Famer in a game of H-O-R-S-E. Now, you know anyone as competitive as Wilkins is going to ask to run the game back, which is exactly what happened when the two played again in December 2016.

This time, Wilkins was able to pull out the victory and even things up at 1-1. 2 Chainz went to Twitter to suggest that Russia may have rigged the results, a jab at the suspicion surrounding the results of the 2016 presidential election.

Our conclusion? He’s legit. 2 Chainz’s receipts get a passing grade from us.

Have a suggestion for #ShowMeTheReceipts? Know of an entertainer who spent time in his or her past life as an athlete? Let us know here at The Undefeated. Leave a message on our Facebook page.