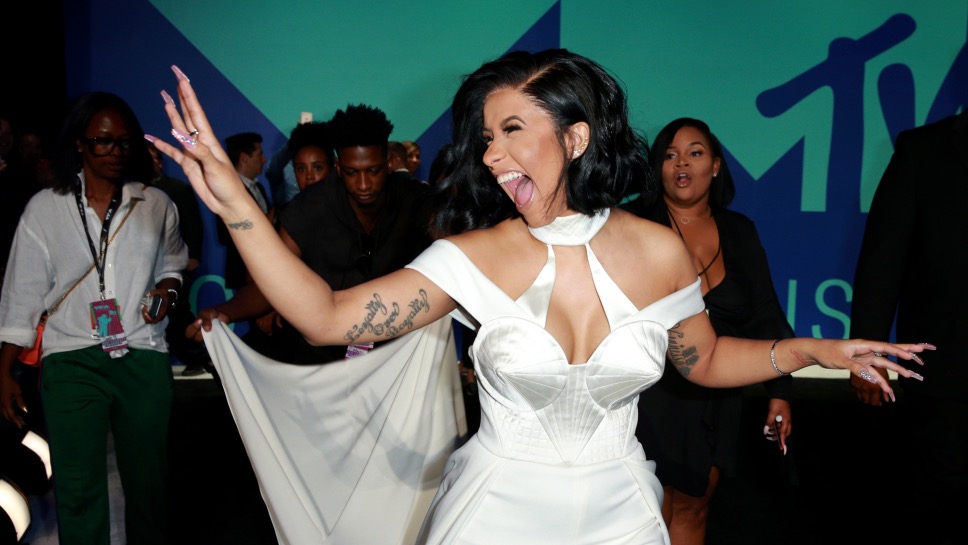 Cardi B attends the 2017 MTV Video Music Awards at The Forum on August 27, 2017 in Inglewood, California. Rich Fury/Getty Images

2017 VMAs style was all about getting graphic and going bold

The 2017 MTV Video Music Awards were held in Los Angeles on Sunday, and the most fashionable stars wore bold colors, graphic prints and sheer (very sheer) metallic pieces on the red carpet. Because it’s better to show off incredible physiques, designer underwear and oodles of sparkling jewelry, of course.

Kendrick Lamar, who was up for eight awards, including video and artist of the year, wore a black coat and trousers by Prada, and bright white Nike Cortez sneakers. The DNA and Humble rapper shared a turn on the red carpet with DJ Khaled and his mini-me son, Asahd, whose baby dragon suit won the night.

A high-fashion enthusiast and best new artist nominee (for his album American Teen), rapper Khalid kept it casual in an orange sweater and black pants.

Twenty four-year-old Ventura, California, rapper Kyle brought out a slick gold suit for his first turn at the VMAs.

The Bronx, New York-born Love & Hip Hop star-turned-pop star Cardi B wore a white silk pantsuit with a train — and a bodice reminiscent of Madonna’s iconic Blonde Ambition pink cone bra — for the red carpet after performing her hit song, “Bodak Yellow,” during the pre-show. Cardi B, whose bold song has stolen the summer, voiced support for former San Francisco 49ers quarterback Colin Kaepernick, who is currently unemployed after protesting the national anthem during the 2016-17 season.

"Colin Kaepernick, as long as you kneel with us, we're gonna be standing for you." – Cardi B (via @adelleplaton)pic.twitter.com/zNU7TcAbN7