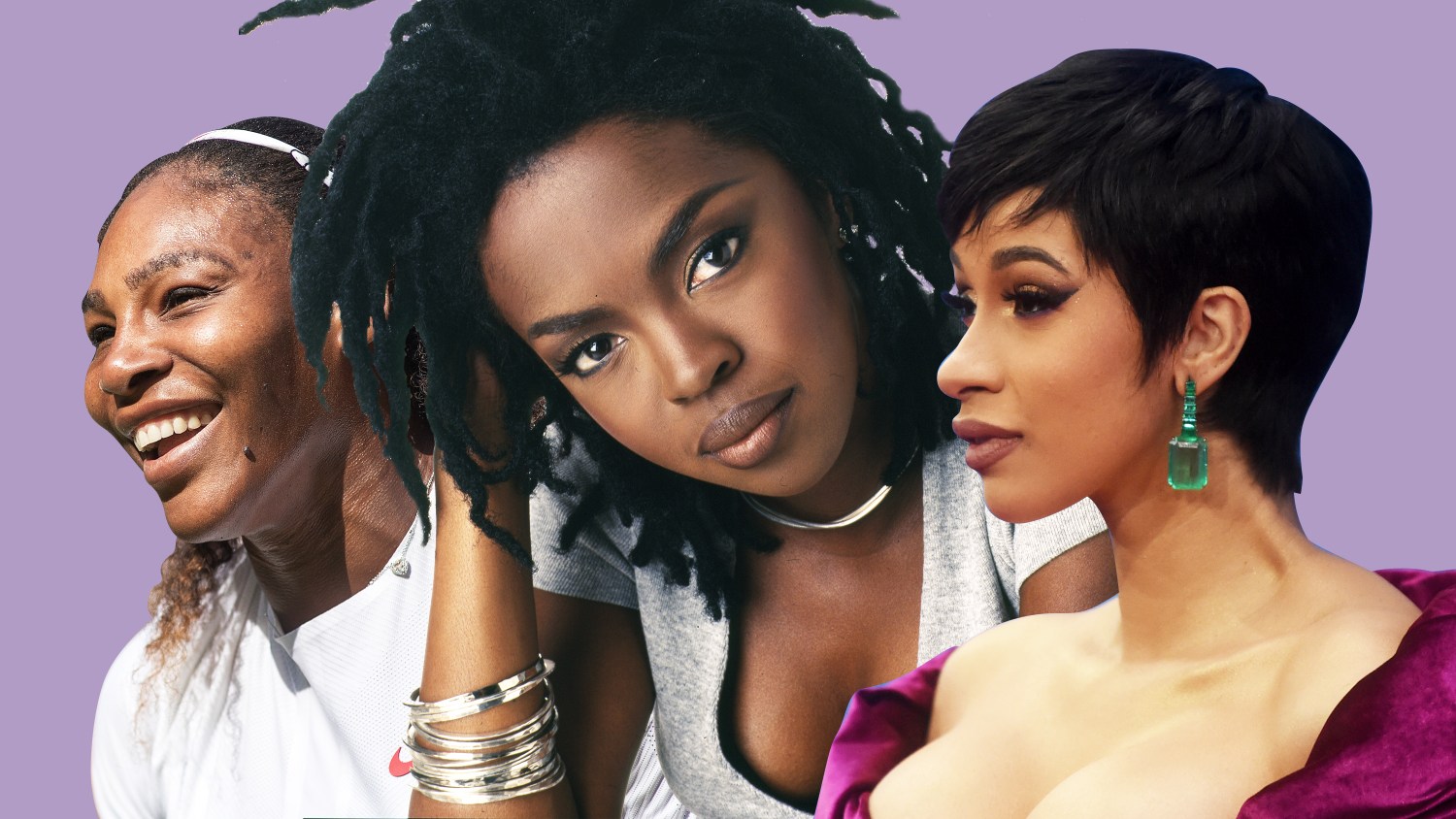 On its 20th anniversary: Lauryn Hill’s ‘To Zion’ and the new motherhood of Serena Williams and Cardi B

The record is what the first heartbeat of a child sounds like. Nearly begging the listener to cry the moment Carlos Santana makes his presence known. His guitar is melting butter under the hot knife of lyrics best described as sacred. But it’s the choir, toward the end, that seals the deal: is … in Zion … is in Zion cries in the mic more than it’s sung. The high notes give way to the choir’s last, deserved, curtain call.

The record is Lauryn Hill’s love letter to her firstborn, Zion David Marley. Marley, a grandson of Bob Marley, is now 21 and a father himself.

“To Zion” is the emotional apex of The Miseducation of Lauryn Hill, a project full of emotional turning points. The song is a musical representation of the unbridled joy only a mother can feel the first time she feels her child move in her womb.

Hill’s grand gesture of black motherhood begins its 20th revolution on Saturday, and the commemoration coincides with the new motherhood of Cardi B and Serena Williams.

Miseducation was an overwhelming success, with 19 million copies sold worldwide. Hill apparently took home more than $25 million in 1998 and ’99 from royalties, touring and merchandise. Hill was awarded a record-setting five Grammys, including album of the year.

It’s an album with a never-ending supply of entry points, all warranting the kind of deep discussions that will be inspired by Joan Morgan’s new She Begat This: 20 Years of the Miseducation of Lauryn Hill. And there’s the album’s peculiar and heartbreaking timing, sandwiched between two upheavals in Hill’s career: the dissolution of the Fugees and the lawsuit that plays a large role in how Miseducation is canonized. There’s now even jazz pianist Robert Glasper’s recent and vicious takedown of Hill, in which he asserts that she “got a big head off of music [she] didn’t even write.”

A legal drama that shattered the image of Hill as the project’s sole writer and producer ended with Hill settling a suit in 2001 for a reported $5 million with musicians Vada Nobles, Rasheem “Kilo” Pugh, Tejumold Newton and Johari Newton, who demanded partial writing credit for 13 of Miseducation’s 14 songs. And “Zion” is that one. And undeniably, “To Zion” is Lauryn at her most Lauryn. “[That] was her baby, because it was about her child,” Nobles said. “Can’t nobody interfere with that right there.”

There were theatrics surrounding Hill’s pregnancy. The Wendy Williams we know from her syndicated show was a New York City radio jock back then, and obsessed with learning the identity of the father of Hill’s child. Wyclef Jean, who was married during Hill’s pregnancy, would say in his autobiography, Purpose, that Hill leading him to believe that Zion was his child was the breaking point of 1990s powerhouse group the Fugees. The hysteria around “Lauryn-gate” troubled Hill. “Yeah,” she said to Vibe in 1998, “I’m allowed a personal life.”

So by the time Hill began recording the early stages of “Zion,” emotions were already charged. There was Hill confessing her love to a child already a topic of tabloids. Maternal instincts kicked in — protect the child and love the child. But if a thing test me / Run for mi gun / Can’t take a threat to mi new born son is from another Miseducation song. There were tears from those around Hill who were moved by the New Jersey native’s transparency. “I almost started crying on the spot,” said Gordon Williams, the project’s supervisor.

Pregnancy is already an intimate process. Giving it a soundtrack only upped the ante. “When some women are pregnant, their hair and their nails grow, but for me it was my mind and ability to create. I had the desire to write in a capacity that I hadn’t done in a while,” Hill said to Ebony in 1998. “I don’t know if it’s a hormonal or emotional thing. … I was very in touch with my feelings at the time.”

“That song personally resonates with me a lot. And that’s a lot coming from a woman who is 90 percent sure she doesn’t want kids.”

Cardi B and Serena Williams have both spent large parts of 2018 detailing their experiences of new motherhood in sometimes heartwarming, sometimes heart-wrenching terms. There’s been a lot of unapologetic honesty — a lot of “Zion” energy.

Cardi B made her grand return to the stage at this week’s MTV Video Music Awards by winning three awards and, in her opening performance, pretending to breastfeed. In June, she spoke candidly about her decision to get pregnant with Offset, one-third of the hip-hop trio Migos: Cardi B gave birth to the couple’s first child, Kulture, in July. Why him, some asked. But really, why now?

When it comes to starting a family, so often in the music industry the freedom and flexibility afforded men isn’t available across the gender line. She’s at such an important moment in her career, why would she get pregnant now? This came up a lot when Cardi B canceled her appearances on Bruno Mars’ tour, citing her underestimation of “this whole mommy thing.” Offset, though, is currently on the summer’s hottest tour with Drake.

The pushback Cardi B experienced had a familiar sound: Woe this crazy circumstance/ I knew his life deserved a chance/ But everybody told me to be smart / ‘Look at your career,’ they said / ‘Lauryn, baby, use your head.’ But instead I chose to use my heart, Hill sings on “Zion.”

Those lines weren’t the only mood that seemed to still be in place two decades later, and came to mind about Cardi B. Word leaked out before Cardi B was ready to announce herself that she was pregnant. The most delicate moment of her life wasn’t under her control. “The media didn’t even let me tell people,” Cardi B told Rolling Stone, “and I hated that.”

Then there’s Williams. A quick glimpse of her Instagram reveals how much she loves her family life. Williams’ husband, Alexis Ohanian, and their daughter, Alexis Olympia Ohanian Jr., are her lifelines.

Williams initially questioned whether she was up for motherhood. Winning Grand Slams — 23, to be exact, and the last, famously, while she was pregnant with Alexis Olympia — is in essence a solo mission. Motherhood is all about teamwork. Self-doubt quickly morphed into deep maternal love and companionship. The same seen in “Zion.”

Hill sang, How beautiful if nothing more / Than to wait at Zion’s door / I’ve never been in love like this before. Two decades later, Williams lightheartedly joked, “We’re not spending a day apart until she’s 18. Now that I’m 36 and I look at my baby, I remember that this was also one of my goals when I was little, before tennis took over. When I was still kind of a normal girl who played with dolls.”

I love the story behind this hat. I ran across it randomly at this fab store @tictail owned by an amazing woman named Briana. It reminds me of my love for @olympiaohanian This hat has an incredible and inspiring story, with 100% of the proceeds going to @lupusresearchalliance. Click the link in my bio to grab one yourself.

Neither woman was ready to truly let go and jump back into the lifestyle that made her a superstar in her respective craft. Cardi B, who admitted she wasn’t there physically, wasn’t yet ready to return to music because she wasn’t ready to leave her baby behind. Williams cried when she missed her daughter’s first steps while training for Wimbledon.

It’s all happening during a larger conversation about motherhood and women of color in America. The Organization for Economic Cooperation and Development concluded that the United States is the lone country in the developed world without mandates for employers to offer paid leave for new mothers. Finland offers up to three years. Canada gives one year. And it’s 91 weeks for Norwegian mothers.

In the black community, mothers are three to four times more likely to die than white mothers. Socioeconomic factors play a role — and many health disparities are fueled by racism. There are also access issues: to clean water, quality education, healthy food, health insurance and more. Cardiovascular disease and high blood pressure rank near the top of the causes of maternal death, and both disproportionately affect blacks. Likewise, studies have revealed that pre-eclampsia and eclampsia rates are 60 percent higher in black women than in white women and that black women are affected more severely.

The issue has been in plain sight for decades. Pop culture’s addressed the topic — notably in the video for Aaron Hall’s 1994 single “I Miss You,” about a woman who dies in childbirth. It was the biggest hit of his career. “You can’t educate your way out of this problem. You can’t health care-access your way out of this problem,” said Raegan McDonald-Mosley, chief medical director of Planned Parenthood Federation of America. “There’s something inherently wrong with the system that’s not valuing the lives of black women equally to white women.”

Williams nearly died days after giving birth. Her history of blood clots is well-documented. She missed an entire year of action at the start of the decade because of a pulmonary embolism that left her, in her words, “on my deathbed.” So the day after her daughter was born, when she began experiencing shortness of breath, Williams knew the deal.

The hard part was convincing the medical team around her before it was too late. Struggling to breathe, Williams told the nearest nurse she immediately needed a CT scan with an IV heparin drip. Thinking the pain medicine had her loopy, a doctor was performing an ultrasound on her legs. It wasn’t until the medical team finally listened to her that the CT revealed several small blood clots in her lungs.

If Williams, one of the world’s most recognizable individuals, experiences these issues, what becomes of the names of women we’ll never hear? What about their cries that go unheard?

“To Zion” is about the bond between a mother and her first child. But it’s also about a woman’s choice — and voice. “I love my life as is and also don’t want to pass on the trauma from my family,” said Brooklyn resident Sophia Buxton, 31. She’s managing director of the development and external relations office at the Bank Street College of Education, and she often listens to Hill’s unicorn of a solo album. And despite Buxton’s decision not to have children, Hill’s soul still aligns with Buxton’s because of the courage it took to record the song.

Defining the perpetually tardy Hill in 2018 is a difficult task. And discussing The Miseducation of Lauryn Hill comes with its own caveats. But taking the music on its own merit, and the emotions stored within, is perhaps the best way. The album and woman are ideograms of black womanhood and the joys, pains, pride and fears that come along with being a member of the demographic Malcolm X once deemed the most disrespected, most unprotected and most neglected person in America.

The most beautiful part of the song carries the most weight, the most emotional baggage — it forces us to have conversations. Hill did it 20 years ago. Then, as now, perhaps the most important thing society can do is what’s most missing: listen.