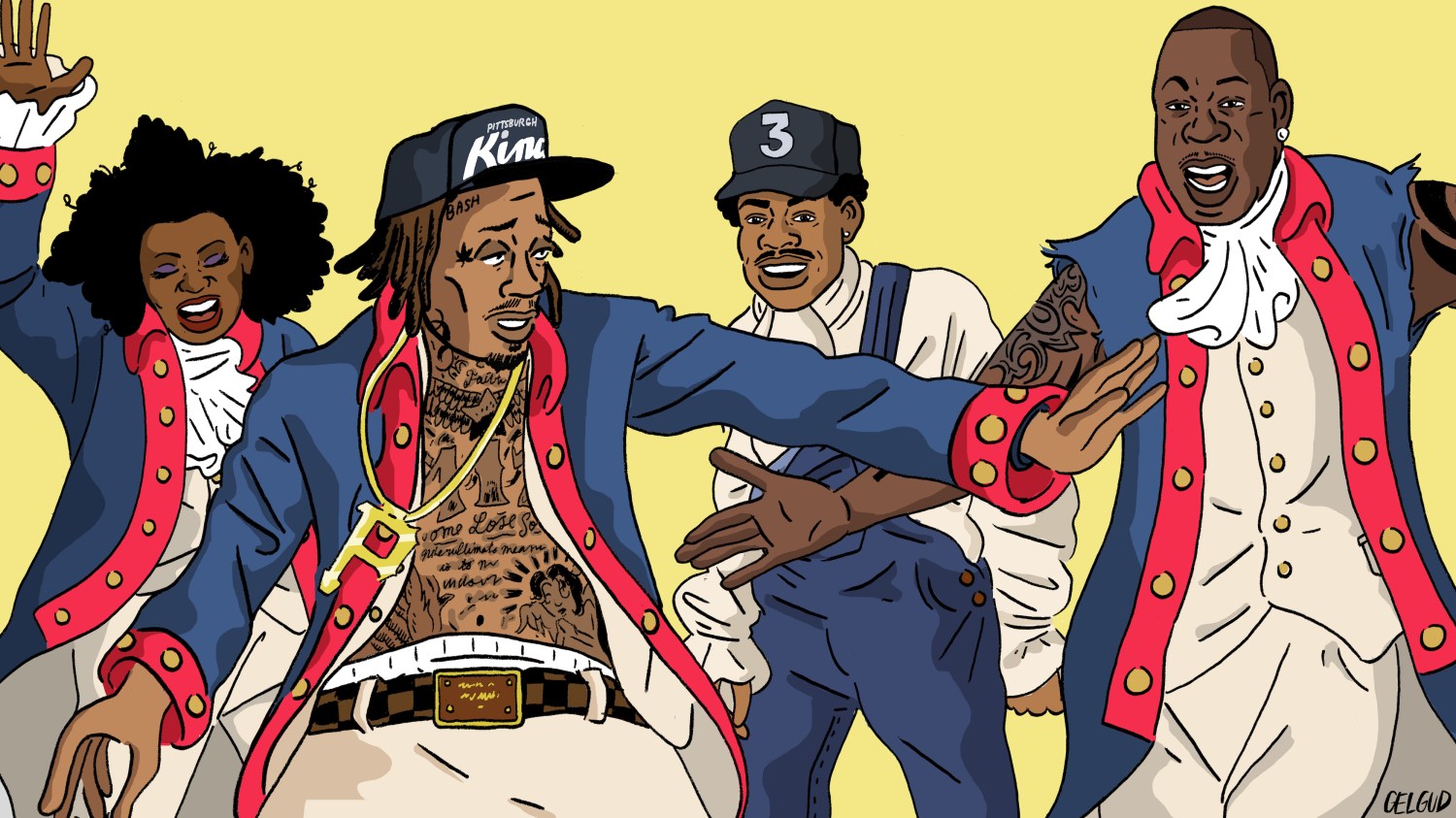 A brief history of the new ‘Hamilton Mixtape’

A year and a half ago, longtime Aftermath Entertainment music producer Mike Elizondo was contacted by Atlantic Records vice president of artist and repertoire, Rigo “Riggs” Morales. The conversation centered on an upcoming project related to Lin-Manuel Miranda’s then-new Broadway musical, Hamilton.

Elizondo, a longtime friend of Miranda’s who’d seen the musical when it was off-Broadway, was tasked with submitting tracks for consideration for what Miranda was calling The Hamilton Mixtape, a music project separate from the original Broadway cast album, Hamilton, which was released in September 2015 and is a worldwide phenomenon.

One such rough mix was titled My Shot — its name and theme are taken from an original song in the musical and centers on Manuel’s character, Alexander Hamilton, not wasting his chance to seize a life-altering opportunity. With live cast recordings and a prerecorded verse from Black Thought, longtime frontman of The Roots, Elizondo worked up a track that would eventually become the first song on what is now Hamilton the Mixtape (which drops Dec. 2), setting the standard and attitude of the project. It’s inspired by the groundbreaking musical, but isn’t derivative. The goal was reimagination.

“The track wasn’t beholden to the Broadway cast recording,” said Elizondo from his Los Angeles office. His production credits include Dr. Dre and Eminem’s 1999 Forgot About Dre, 50 Cent’s 2003 In Da Club and Eminem’s 2000 The Real Slim Shady. “It’s edgy and contemporary at the same time. Lin liked it.”

In the time since Elizondo and Morales made contact about a collaboration for Miranda’s mixtape, Hamilton has exploded as both a theatrical and cultural sensation. The Hamilton soundtrack, which was released last September, also on Atlantic Records, has sold more than two million albums and won a Grammy for best musical theater album. The soundtrack’s debut at No. 12 on Billboard’s album charts was the highest for a cast album debut since 1963. The musical, which debuted at the Richard Rodgers Theatre in August 2015, remains the hottest ticket on Broadway — the production most recently broke $3.2 million in sales during the week of Thanksgiving alone. Since May 2016, and after an unscripted moment with the vice president-elect of the United States, Hamilton is sold out through January 2017.

The now 23-track complete mixtape is likely to become one of the most popular musical projects of the year. Executive produced by Miranda and Questlove of The Roots, who also executive produced the cast soundtrack, the mixtape features covers from the original soundtrack as well as original songs with titles taken from popular and prominent phrases in the musical.

“As the story goes, the original idea for Hamilton was for it to be a mixtape before it turned into a Broadway musical — seven or eight years ago,” Elizondo said. “Lin has always had the idea to, at some point, invite different artists and people he’d admired or had relationships with.”

Like the musical itself, the mixtape strikes various attitudes. The first original song featured is the now-complete My Shot, which features uplifting and lyrical verses from Black Thought, Joell Ortiz and Busta Rhymes, as well as vocals from Fun’s Nate Ruess. The song echoes the core lyrical phrase from the original soundtrack: “I’m not throwing away my shot.”

Immediately following My Shot is Wrote My Way Out, a gritty take on Alexander Hamilton’s original hustling story featuring Nas, Dave East and Miranda. East, who was living in New York City housing projects just two years ago, said his verse came naturally. “I wanted to write something that would hit people … I really wanted to let them know a little about me. It’s one of my better verses.”

Another adaptation from the original soundtrack is Immigrants, which features Snow tha Product, Residente, Riz MC and K’naan. The title of the track is taken from the song Yorktown from the original soundtrack. On the original, Miranda, playing Hamilton, and Daveed Diggs, who plays French military officer Marquis de Lafayette, sing the lyric,“Immigrants, we get the job done.” Hamilton himself was an immigrant from Saint Kitts and Nevis, and Miranda has described the track as a “musical counterweight” to the recent and virulent xenophobia directed toward the U.S. immigrant population in recent months due to the 2016 presidential election.

Elizondo also produced Andra Day’s cover of Burn, in which he reimagines the song’s production to give it a “classic, old-school R&B vibe with hip-hop drums and overtones.” He said the song matches the dark tone of the corresponding moment in the musical in which Hamilton’s wife Eliza learns of Hamilton’s infidelity. The mixtape also delivers a welcomed reunion of Ja Rule and Ashanti. They cover Helpless. It’s their first collaboration in 10 years, but the duo’s chemistry is intact.

The project also features songs from Common, Wiz Khalifa, John Legend, Alicia Keys and a reunion of Chance The Rapper and Francis and the Lights for their first collaboration since Summer Friends from Chance’s own recent mixtape, Coloring Book. Usher channels Hamilton character Aaron Burr on a cover of Wait For It — one of the musical’s most touted songs. And the Elizondo-produced Satisfied features vocals by Miguel and a verse from Queen Latifah.

To ensure that the mixtape is different from the original soundtrack, Miranda instructed producers to construct tracks as if they belonged to the artist who was performing them — and not the musical. “He said make it sound like an Andra Day song or make it sound like a Sia track, and that’s what I tried to do,” Elizondo said.

The mixtape is likely the next step in Miranda’s continued efforts to expand the already massive hip-hop audience — specifically what’s known to many as “lyrical” hip-hop.

“In hip-hop, there are different avenues … the poppy-sounding records, a lot of the trap is more popular, and then there are people like myself who stand for lyricism, bars and metaphors,” Ortiz said. “The fact that [Miranda] went our route — the penmanship lyricist metaphor simile — our route, it made it special.”

Elizondo said there’s even more to it than that. He said that while it was one thing for Miranda to introduce the Hamilton audience to hip-hop, it’s a huge leap to then introduce them to some of the leaders of the industry – past and present. “A lot of people … are going to be introduced to artists they might not have or even been aware of,” he said. “There’s a generation that only knows Queen Latifah as an actress.”

Ortiz and East, whose features were both released early, have already seen the growth and expansion of their audience — new followers turned fans, they said, would not have found their music without the Hamilton cosign. “The following definitely picked up with the release of that record,” East said. “It’s bigger than NYC and the streets, it’s starting to crossover … It’s dope, man.”

“There’s people following me on social media that I have no clue like why,” Ortiz said jokingly. “Lin has definitely opened up my audience. It’s overwhelming, but it’s amazing to see what hip-hop and Broadway can do. I’m just on a ride.”