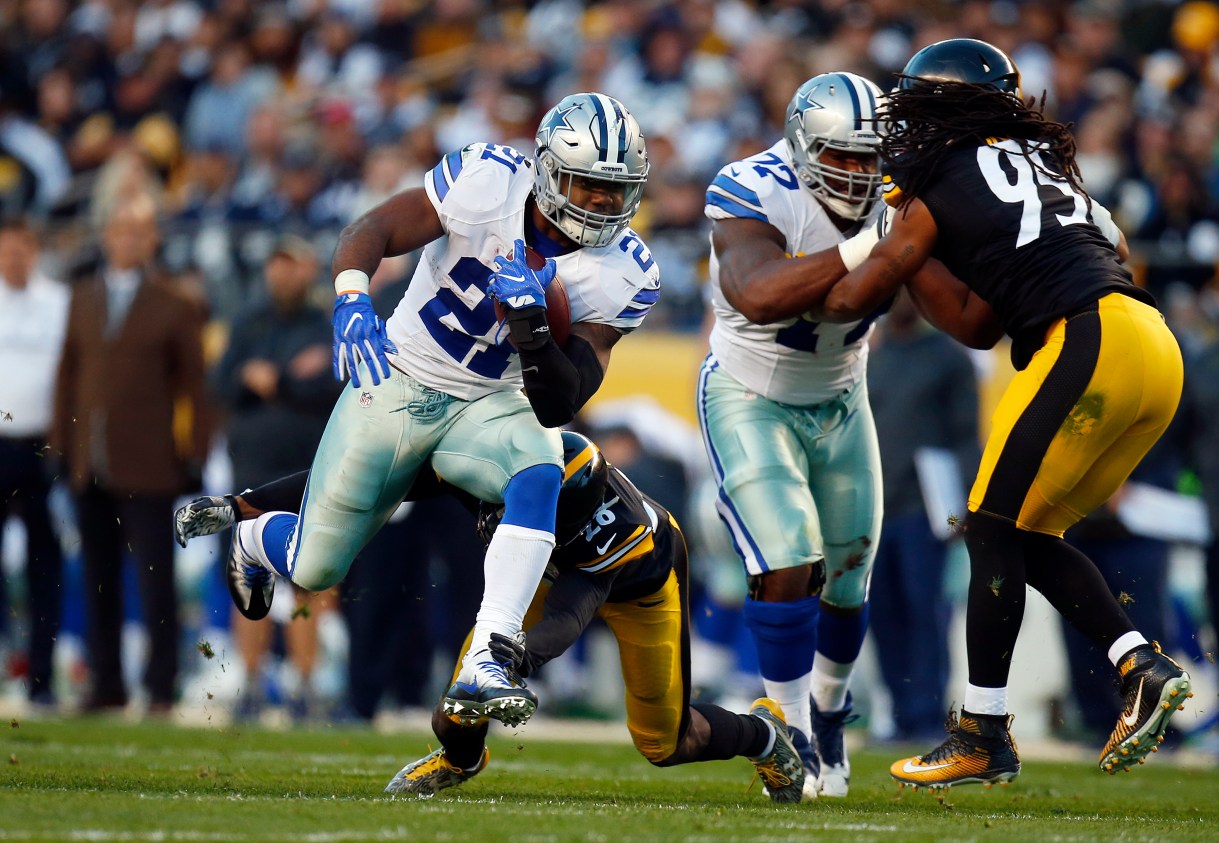 A foundation built on bedrock: The Cowboys O-line is the real deal

Footwork, hand placement, smarts — the group has the entire package

As reporters questioned him the other day about the secret of the Dallas Cowboys’ success, running back Ezekiel Elliott often had a puzzled look on his face. There is no mystery, the star rookie thought to himself. All you have to do is look up front.

“The O-line. They grind guys down,” Elliott said matter-of-factly after the team’s 35-30 back-and-forth road victory over the Pittsburgh Steelers.

“They keep bringing it. We know that if we just stick with them … those holes are gonna pop. Our line, they’re just the best at what they do. And for what they do for me, I can’t thank them enough.”

Elliott’s partnership with the Cowboys’ big-time blockers has been mutually beneficial. By following the kick-butt group, Elliott has emerged as the NFL’s leading MVP candidate to this point. The offensive line — led by left tackle Tyron Smith, center Travis Frederick and right guard Zack Martin — has been re-energized by the former Ohio State All-American. Together, their results have been about as good as it gets.

Against the Steelers, Elliott scored three touchdowns — including the game-winner on a 32-yard run with nine seconds remaining on the clock — rushed for 114 yards on only 21 carries and had another 95 yards on two receptions (his 83-yard touchdown on a screen pass was just sick).

With 1,005 yards rushing, Elliott is first in the NFL. He needs only two yards to break Tony Dorsett’s rookie team record. Elliott also has the third-most yards through the first nine games of a career in NFL history, according to the Elias Sports Bureau. Eric Dickerson and Adrian Peterson are first and second, respectively. When you’re mentioned in connection with Dorsett, Dickerson and Peterson, you’re rolling in great company.

Here’s where the Cowboys’ O-line comes in: It keeps the heat off of Elliott.

Beginning play Sunday, Elliott had 495 rushing yards before first contact this season – third most in the NFL, according to ESPN Stats & Information. He added 82 more against the Steelers. On the game’s final touchdown at Pittsburgh’s Heinz Field, Elliott went untouched through a hole big enough for a tour bus.

Elliott and the O-line (we can’t forget about rookie quarterback Dak Prescott’s winning touch, too) have provided the foundation for the Cowboys’ eight-game winning streak. Dallas (8-1) leads the NFC East, has the NFL’s best record and matched its 1977 squad, which also ripped off eight wins in a row. And none of this is the least bit surprising.

Determined to reinvigorate their running game, the Cowboys chose Elliott with the fourth overall pick in the 2016 draft. In 2014, the O-line cleared the path for DeMarco Murray to rush for a franchise record 1,845 yards.

Murray left in free agency after the season. Almost from the moment Murray walked out the door, the running game stalled. Although quarterback Tony Romo’s injuries last season hurt the offense more than Murray’s departure, the Cowboys knew they had to upgrade at running back. By bringing in Elliott, owner Jerry Jones checked that box. Quickly, the O-line checked off on Elliott.

“He’s a great running back and he’s a great kid,” said Smith, widely considered to be the game’s best left tackle. “Every conversation we have, when we’re trying to make situations better, he sits down in those conversations with us. You can see how hard he works. We respect that.”

“As an offensive line, what we try and do is improve each and every week,” Frederick told me recently. “You can see he’s done the same.”

A foundation built on bedrock has enabled the Cowboys to rank among the NFL’s top five in many major offensive categories. Over the years, Dallas used first-round picks on Smith, Martin and Frederick. With each, they hit home runs.

Late in his career, former longtime NFL offensive lineman Derrick Dockery played for the Cowboys. Dockery watched Smith develop and had no doubts he would become one of the game’s best. Now, Smith anchors an O-line that reminds him of the franchise’s famed group from decades ago.

The Cowboys assembled the greatest offensive line of the 1990s, which helped the franchise win three Super Bowl titles, “and those guys were known as the Great Wall for a reason,” Dockery said. “They were just that good. I look at this group as the Great Wall 2.0. They’re that good.

The Cowboys’ O-line is crazy talented. Footwork, hand placement, smarts – the group has the entire package. And they’re truly close. That don’t hurt.

“Everyone knows they’re extremely good. That’s not a surprise,” backup Dallas running back Alfred Morris said. “But there are a lot of talented guys on a lot of lines. The thing about our line is their closeness. They do so much together. They run together. They lift together. They have weekly dinners. They always go to different places together.

“All of the stuff they do, that tightness off the field, it helps them on the field. And, man, they grind. Their work ethic, just their mindset about how they approach every day, that really sets everything. Their approach is really clear: We’re going to show up, we’re gonna outwork people and we’re gonna dominate.”

Sound philosophy. And for the Cowboys, it’s working spectacularly.