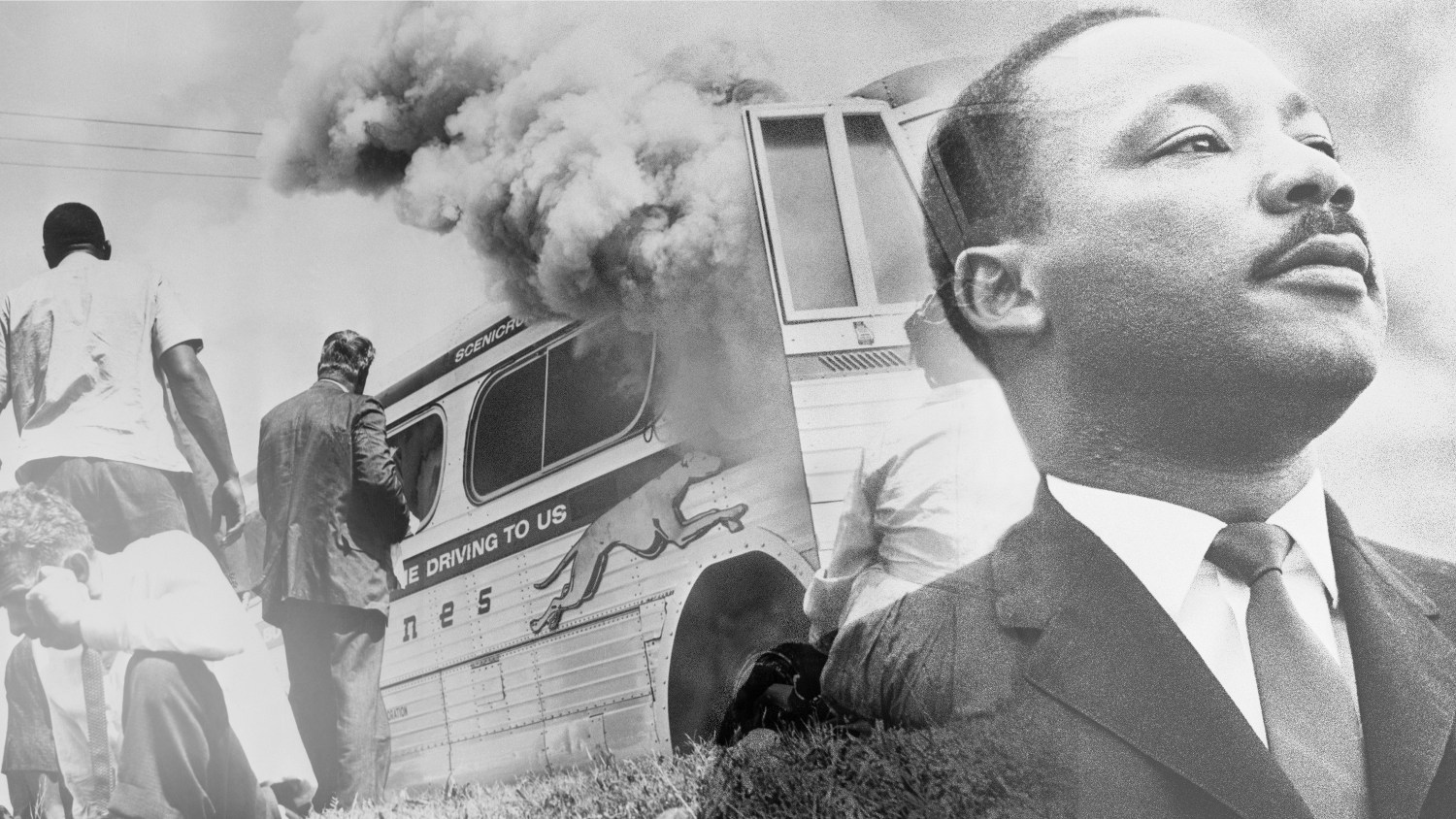 CORE, SNCC, and the intense generational divide in the civil rights movement

It was a warm May afternoon. May 22. 1961. About 30 activists, mostly of college age, were huddled in the Montgomery, Alabama, mansion of pharmacist Dr. Richard Harris. They were from the Student Nonviolent Coordinating Committee (SNCC) and the Congress of Racial Equality (CORE) and they had two goals.

One: persuading Martin Luther King Jr. and CORE leader James Farmer to allow them to continue the Freedom Rides to Jackson, Mississippi. Two: They also wanted King to join them. A group of young activists from Nashville, Tennessee, led by Diane Nash, and a group from New Orleans led by activist Oretha Castle had rushed to Montgomery to plead their case as to why the Freedom Rides should continue.

These young men and women were also convinced that they would die in two days.

But the CORE and SNCC members, mostly younger and more rambunctious than the 32-year-old King, were determined that the rides should continue despite that certainty — and believed that he should join them. The pivotal meeting signaled a generation gap in the civil rights movement that endured through its existence. King had never participated in the Freedom Rides and, for some, this signaled a reluctance on his part to put his life in direct risk. That he may have felt too important to join others in the field. But the story is obviously more complicated.

My father, David Dennis Sr., was part of the New Orleans contingent and part of that meeting with King. He was a scrawny 20-year-old Dillard University student and had joined the movement after trying to impress the beautiful Castle by joining her at a sit-in at Woolworth’s lunch counters. He’d been assured he wouldn’t be arrested. Well, he sure was arrested and the mistreatment he witnessed in the jails moved him to spend the next few months training Freedom Riders in New Orleans, where hundreds of eventual riders would be taught how to stay calm while being spat on and beaten, how to protect themselves from violence, and how to stay safe in the face of certain danger.

My father grew into a passionate community organizer and field secretary for CORE. He was integral to the planning of 1964’s Freedom Summer. But in the Montgomery meeting the man who became my dad 25 years later was just a kid who wanted to help.

The fire he had for equality was there. His longtime friends are quick to tell stories of his passion for civil rights, and his willingness to speak his mind. That intensity is still there 50 years later when I hear him talk about the ’60s and the ’70s, and when I hear him speak on current events. It’s hard to imagine my dad being unsure of his place in the fight for civil rights, or unsure of anything, really.

“I was in awe of [King’s] presence,” my father says now. “I was in a dreamland, being around all of these people I’d read about [through the 1950s]. I was wondering if I belonged there.” Though my father would eventually become a field secretary for CORE, when he went to Montgomery he was without a title and just eager to contribute something. And he was overcome by the reality of being in the same room as King in such a tense moment.

“Troops are on the way in from Montgomery now,” King said on the night of May 21.

“They have requested that all of us stay in here for the time being, that nobody will leave. And may I make another personal request on behalf I think all of us — that we must be sure that we adhere absolutely to nonviolence. Now it’s very easy for us to get angry and bitter and even violent in a moment like this. But I think this is a testing point. Now, we had to go out a few minutes ago and counsel with some of our own people who were getting to the point of returning to violence. And we don’t want to do that. We can’t do that. We have won the moral victory.”

“You could feel his spirit in the room,” my father says now. “As far as I was concerned, he was a leader. But, in that meeting, he was really challenged by a lot of the CORE people.”

The Freedom Rides were a very organized attempt to protest segregated interstate bus terminals in the South. The plan was to have black and white activists board buses in Washington, D.C., and ride through the Deep South. On May 14, the rides hit a violent roadblock, literally and metaphorically.

A mob had descended on a bus carrying freedom riders through Anniston, Alabama, slashing the tires and smashing the windows. Someone from the mob — which included parents with kids on their shoulders who watched the violence like it was a sporting event — tossed an explosive into the bus. The vehicle was filled with smoke and the riders were trapped inside, struggling to breathe. An explosion ripped the rear of the bus apart, allowing the riders to escape — only to be beaten by the waiting mob. Another group of riders were beaten by attackers with lead pipes on May 14 in Birmingham, Alabama. The mayor, Bull Connor, refused to provide protection for the riders because it was Mother’s Day. The violence led to a moratorium on Freedom Rides, and the belief that the movement had failed.

King, upon hearing of the violence, flew from Chicago to Montgomery on May 21 to meet with activists to discuss the future of the rides and whether they should continue. But first, he delivered a speech in support of the riders at Abernathy’s First Baptist Church. He almost didn’t survive the night. Another mob, including several Klansmen, surrounded the church and threatened to beat or kill anyone who left. King and the members of the church were held under siege in the church until dawn the next morning, when federal marshals and the Alabama National Guard finally escorted them out. When King left the church, he headed to Harris’ house, where the pivotal meeting about the Freedom Rides took place.

King was on probation for a bogus traffic violation from the previous May. And another arrest, which was guaranteed to happen if he joined the rides, would have resulted in him being in jail for months. There wouldn’t have been any way of getting him released, creating a growing possibility that he’d be killed at some point during his time in jail. “If they put King in that Montgomery jail, he would have never gotten out alive,” my dad recalled. A reminder of just how much danger King and other activists were in at the time.

For some, that was too much of a risk. Others believed it was a necessary risk that many other people on those buses were willing to take. King, to his credit, seemed amenable to going.

If you want me to go, I’ll go. My dad remembers King’s willingness to go on the rides. King’s advisers, Wyatt Tee Walker and Ralph Abernathy among them, adamantly suggested during the meeting that King avoid the rides. So King’s reputation among some riders took a hit as they boarded buses. They referred to him as “De Lawd,” mocking his decision. The belief among these dissenters was that King would rather be the face of the movement and not actually do the dangerous work. “[King] got flak for that decision [not to join the rides], but I didn’t think he needed to go,” my father says now. “I didn’t see him as being a coward for not going. It was an unnecessary risk. We all were willing to go on the rides, and didn’t really need him to go.”

Robert F. Williams, president of the Union County, North Carolina, NAACP branch lambasted King in a June 5, 1961, edition of his newsletter The Crusader:

It is pathetic that some of the students are under suspended sentences and some are three and four time losers for freedom, yet they are participating. Maybe, in King’s estimation, they are just students and only stand to lose their lives or careers while he stands to lose a fortune in struggle and blood money.

“In our 20s we thought everyone should go to jail,” said Dennis. “But [King] wouldn’t have made it out of a Montgomery jail alive. When we were in that meeting, he’d just spent the night in a church surrounded by Klansmen. He put his life on the line. Nobody in the movement was a coward.”

The mansion was full of people who truly feared for their lives. And the folks from CORE and SNCC finally persuaded King and Farmer to give their blessings for the rides to continue. My dad, just a few months into the movement, was definitely scared. “When we decided to get on that bus, I started having doubts … wondering, ‘What am I doing here?’ Then someone in the room, I don’t even remember who it was, said something I’ll never forget.”

There’s not enough space in this room for both God and fear, so make your choice.

On May 23, King, Abernathy and John Lewis — a man of action who was sporting a bandage after being attacked by the Montgomery mob two days before, and who would join the riders to Jackson — held a news conference stating that the rides would continue. On May 24, my dad was with the first group of Freedom Riders out of Montgomery.

What the Riders did not know was that Attorney General Robert Kennedy had declared that the Freedom Riders would get National Guard protection along their routes and he vowed that there would be no more violence. What the Freedom Riders could not know is that seven years later, King would be assassinated in Memphis, Tennessee. And Robert Kennedy two months after King. And just last week, President Barack Obama proclaimed the site of the Anniston, Alabama, attack a national monument.

The conflict between King and the Freedom Riders is one to remember as the need for resistance persists more than half a century later. “We all had different roles,” said Dennis, who has spent the last two decades trying to bridge the education gap in America while also traveling the country speaking about the civil rights movement and how to achieve those dreams in the 21st century. “King’s role was different. Nobody could articulate the issues in the movement the way he did. His role was to do what he did. There were farmers, and workers in cities who had roles and couldn’t go to jail because they had families to take care of. The students had their roles, too. We all had different things we needed to do to achieve our goals. Nobody was more important than anyone else.”