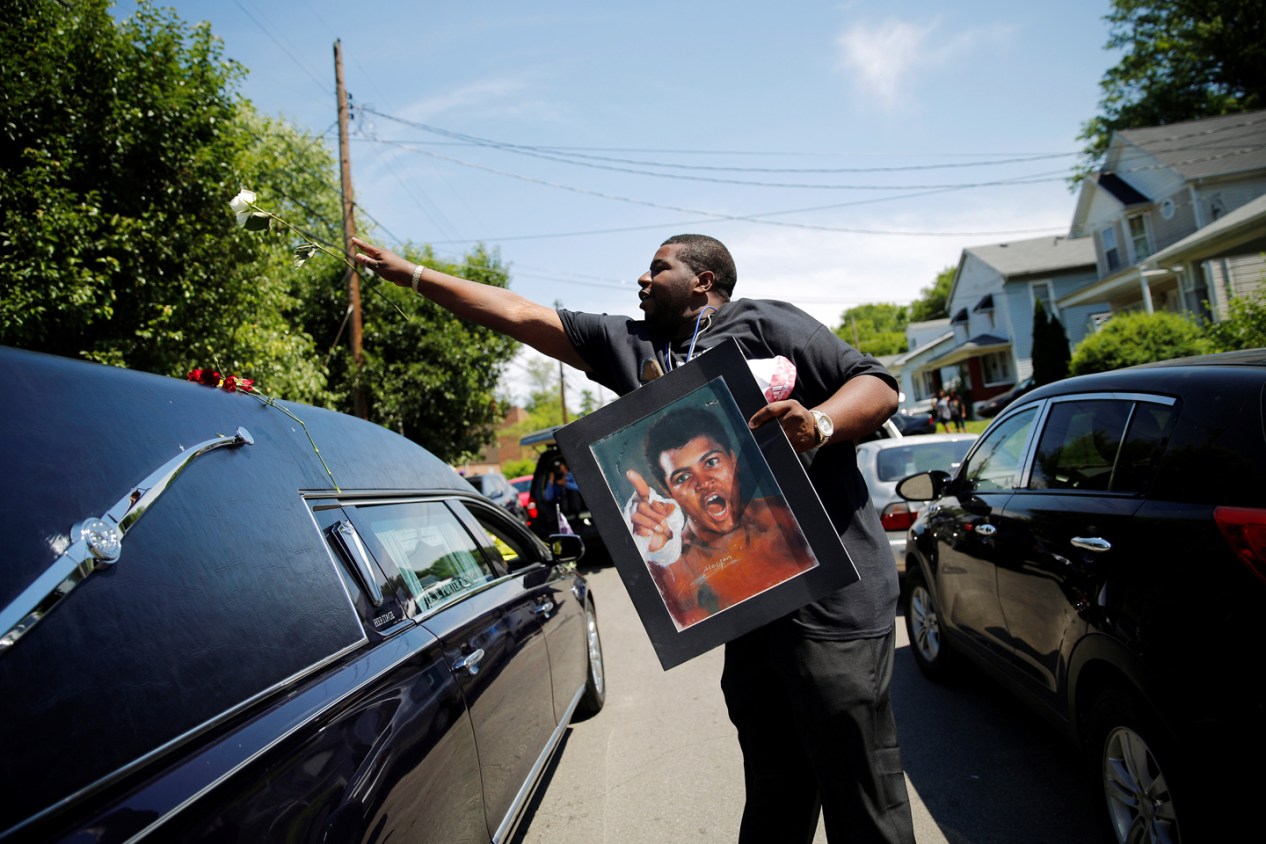 A man throws a rose over the hearse carrying the remains of Muhammad Ali during the funeral procession for the three-time heavyweight boxing champion in Louisville, Kentucky, U.S., June 10, 2016. REUTERS/Carlos Barria
Muhammad Ali

A great day for The Greatest

The faithful and the famous remember Ali with laughter and stories

The grand send-off for the son of Cassius Marcellus Clay Sr., and Odessa Lee Grady started over an hour late Friday. He didn’t leave A.D. Porter, one of Louisville, Kentucky’s, oldest African-American funeral homes, until midmorning.

Maybe because he’d been to all these places the procession was passing so many times before – down Bardstown Road, past the Muhammad Ali Center, then up Muhammad Ali Boulevard, past that little pink house at 3302 Grand Ave., his boyhood home where he first learned to feint, dance and dream – there was no reason to hurry.

He had to know the fuss and traffic that would result from a memorial service with faith leaders from all of the world’s major religions, movie stars, heads of state and a cast of famous and eloquent eulogists: journalist Bryant Gumbel, President Bill Clinton, actor Billy Crystal.

By the time they made us pray, laugh, think, cry and laugh some more during a service that crept up on three hours, dusk wasn’t far behind. Louisville’s favorite son had managed once again to make the whole day about himself. And yet the message was even bigger than the great man.

“Muhammad indicated that when the end came for him, he wanted to use his life and his death as a teaching moment,” his widow, Lonnie Ali, told the thousands of people gathered for the memorial service at the KFC Yum! Center.

“He wanted to remind people who are suffering that he had seen the face of injustice,” she said. “He never became bitter enough to quit or engage in violence.”

“Life is best when you build bridges between people — not walls,” Crystal said on the stage, distilling one of Ali’s core principles. “He walked with the gods, ran with the crippled and laughed at the foolishness of it all.”

Beneath the pomp and pageantry of a day he and Lonnie had planned for almost 10 years — away from the T-shirt vendors, the cameras and microphones that descended upon Louisville as if it were Derby weekend, deep down, Ali’s final journey brought a peace and unity that organically transformed a city segregated by race and class into a dawn-to-dusk communal gathering.

The masses gathered early along that 23-mile route from the funeral home to Cave Hill Cemetery. They carried handmade placards and many wore T-shirts that read, “I Am Ali.” Thousands chanted his name and swapped stories of the day they met him — or almost met him.

Like the story of a teenager who chased Ali’s Cadillac down the street one time in the 1970s, running hard and fast, panting as he yelled:

“I almost caught him, I almost did,” lamented Jerry Owens, keeping his shades on outside the cemetery because he said he didn’t want anyone to see him cry. “A person I never met, and he was everything to me. Look at this crowd, man. I’m black. She’s white. He’s brown. Muslim. Christian. Jewish. He brought us here. He brought us together. He was love. He w—“

Even as Owens covered his mouth — “I’m sorry, I get emotional about this.” – a few feet away a woman watching a broadcast of the procession on her iPhone began pointing at a young boy on the screen. Arms flailing, legs churning, he ran alongside the long, black car carrying The Champ. A child, chasing hope, chasing time, chasing the ideal of what it is to call yourself “The Greatest of All Time.”

More than 60 years ago, another child was chasing hope through the streets of Louisville.

It was 1955, Jim Crow Kentucky, and Velma Martin recalls sitting on a school bus when her younger, mischievous cousin tapped on the window. The driver hit the gas. Cassius Jr. kept running, jumping up and tapping on Martin’s window. Maybe 13, he had just begun boxing at the Police Athletic League in the Smoketown section of Louisville. Joe Martin, a white cop, had convinced him that the “manly art of self-defense” could help him after an older boy stole his $65 Schwinn.

Even as he began dancing in the ring and his frame filled out, young Cassius kept racing buses. He used it as a training method on his way to the 1960 Olympic Games in Rome, where he won a gold medal for a nation percolating with racial strife, a nation that in less than a decade would court-martial him for refusing to be drafted into the U.S. Army.

He would ultimately give up 3 1/2 years during the prime of a profession with a finite amount of time. Ali lost millions of dollars, lost the support of millions of Americans who deemed him unpatriotic, and became an incredibly polarizing figure during the ’60s.

The journey continued – to the Nation of Islam and the Muslim name the world would come to know him by. To the pinnacle of his profession – undisputed world heavyweight champion, three times, during a period in America when prizefighters were royalty, and the most kingly of them flapped his legendary gums on ABC’s Wide World of Sports with his celluloid soul mate, Howard Cosell.

An African-American Muslim boxer from Louisville and a white Jewish lawyer from Brooklyn, New York, their banter and sincere affection for each other is forever tethered in time.

He went to so many exotic places, charmed so many people, including that 1974 trip to Zaire for the “Rumble in the Jungle” as an aging 8-to-1 underdog.

But George Foreman fell. Just like Sonny Liston fell. Joe Frazier never went down, but in their third fight, the “Thrilla in Manila,” they traded heavy punches to the head until Smokin’ Joe could not rise from his corner in the 14th round.

And when Ali had had too many fights, when Parkinson’s disease took away the incomparable speed of his hands, the elan in his gait, the rhythmic verse that came so swiftly and often hilariously from his lips, we soon learned it was never about boxing.

“But the second part of his life was more important because he refused to be imprisoned by the disease that kept him hamstrung longer than Nelson Mandela was kept in prison in South Africa. In the second half of his life he perfected gifts that we all have. Every single, solitary one of us have gifts of mind and heart.

“The man who took the steps to light the flame when I was president, I’ll never forget it,” Clinton said, his eyes welling with tears, as he recalled the opening ceremonies for the 1996 summer Olympics in Atlanta. “I had some sense of what he was living with then. But by God, watching his hands tremble, I just bawled like a baby. He was going to make this happen, he was going to light that flame. The flame would be lit, the fight would be won.”

Gumbel summed up the universal outpouring of affection after Ali died at 74 last week:

“What does it say that the man who was once the most polarizing person in America became the most beloved man in the world?”

The ceremony included readings from the Koran, rabbis, senators, Native American tribal leaders. And humor, because one of the ways Ali made us feel most was through his humor.

“To live in his time, every one of his fights had the aura of a Super Bowl,” said Crystal, reprising the patented impression of Ali he’s done for 40 years. “He was funny, he was beautiful, he was the most perfect athlete you ever saw – and those were his own words.”

Nothing about the day felt overly mournful or maudlin. Except for his family, few people wore black. Many in the crowds chanted, “Ali! Ali!” as if they were willing him one more time to topple Foreman or Liston.

Another speaker, Dr. Kevin Cosby, president of Simmons College and St. Stephen Baptist Church, recalled Ali’s beginnings amid the tumult of the ‘60s:

“Muhammad fell in love with the masses and they fell in love with him,” a composed Lonnie Ali said in her remarks. “He was captivated by the Dalai Lama and Mother Teresa, people who catered to the poorest of the poor.”

Ali had left Louisville before many of the people who came to memorialize him on this day were born. He was less a man and more of a myth to much of the younger generation, whose connection to him revolved around a father’s love for his talents as a fighter, or a grandparent retelling stories of his social conviction.

But not Martin, 77, his cousin by marriage who remembers him racing alongside the bus. And not Lauretta Harris, his second cousin and a retired news anchor in Louisville. She remembers, too.

“Before Muhammad belonged to the world, he belonged to Louisville – he was ours,” she said.

Martin and Harris waited for the hearse in the heat outside the black-iron gates to Cave Hill. Jerry Owens finally caught up to the car that carried the idol of his youth, the pride of his adulthood. Festooned in flowers, it drove slowly past them. The gates opened.

Muhammad Ali was traveling no more.