A message for Naomi Osaka: Take all the time you need

Three years ago we witnessed Naomi Osaka at her finest at the US Open, masterfully controlling the court, dominating Serena Williams — arguably the greatest women’s player in tennis history — in a straight-set win.

After that match, Osaka struggled to fight back tears during the postmatch trophy ceremony, when Williams had to ask her fans to turn their disappointment into support for Osaka. Two weeks ago, I viewed that video for the first time in three years — it was hard to watch.

Is it really possible to experience a moment in life that gives you the greatest satisfaction while at the same time yielding to your biggest grief?

We don’t know if what happened in Arthur Ashe Stadium in 2018 triggered what we saw from the defending US Open champion Osaka on Friday night. The uncharacteristic play, the slamming of her racket, the unforced errors, and the visible frustration in her loss to unseeded Leylah Fernandez in the third round of the US Open.

“I feel like for me, recently, when I win I don’t feel happy; I feel like a relief,” Osaka said following Friday’s loss. “And when I lose, I feel very sad.

It’s proof that professional success — Osaka has the most major wins in women’s tennis over the past three years — and the financial rewards that go with it don’t always lead to happiness.

This is the moment where Osaka may determine it is time to truly step away from the sport. Ashleigh Barty, who is 25 years old, took a sabbatical due to the coronavirus pandemic in February 2020 and returned 11 months later. She’s now the No. 1 player in the world.

Barty’s decision merely proves you can leave and come back on top. For Osaka, who will turn 24 in October, it is about more than just not playing on the tour. We haven’t seen an athlete consistently face these challenges before our eyes in this way. Osaka has the talent to be the most dominant player in the game. This goes beyond her talent.

This isn’t Nick Anderson, the former Orlando Magic guard who once missed four free throws in the last 10 seconds of the opening game of the 1995 NBA Finals, when making one would have clinched a victory. The Magic lost that game, lost that series and Anderson’s career was never the same. “I fought with that a long time,” Anderson told the Orlando Sentinel in 2015. “I struggled with that.”

This isn’t Blair Walsh, once an All-Pro professional kicker with the Minnesota Vikings who missed a 27-yard field goal in the 2016 playoffs that led to a loss, keeping his team from advancing to the divisional round of the playoffs. A year later, Walsh, playing with the Seattle Seahawks, missed a potentially game-tying kick that cost his team a chance to advance in the playoffs. He hasn’t played a game since.

We often look to the past for answers for how to respond to challenges, but every person’s struggle is different. We can’t compare one athlete to another. Each experience is unique. One bad performance didn’t derail Osaka’s career. The four-time Grand Slam champion is one of the most likable athletes in professional sports and even used her platform to speak out against racial injustice in 2020 when she wore seven different names on her mask during last year’s US Open. Osaka, whose father is Haitian, also raised money for Haiti following the devastating earthquake in August. While she represents Japan — she was chosen to light the cauldron at this year’s Tokyo Olympics — tennis fans in the United States embrace the raised-in-America star as one of their own.

All the while, she has found herself in the center of a conversation about mental health. Osaka first referred to mental health challenges before the French Open in May, when she said she wouldn’t speak to the media before eventually withdrawing. Osaka opted out of Wimbledon before her appearance in the Olympics, which ended in a third-round exit. 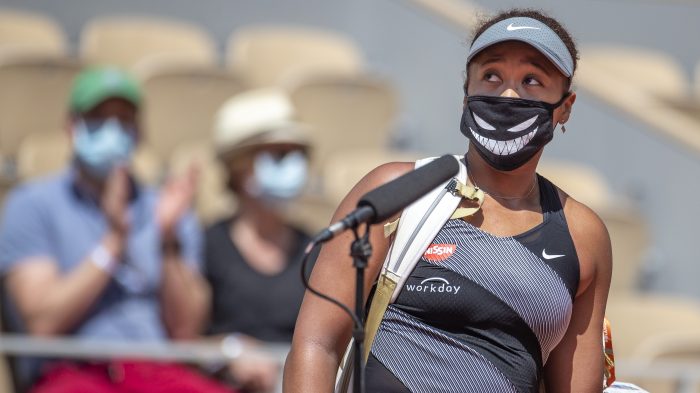 Leading up to the US Open, Osaka continued the mental health conversation on her social media feeds. In a post, she said she was ready to leave her “extremely self-deprecating” habits behind. She admitted to internally feeling like “I’m never good enough,” adding, “I’ve never told myself that I’ve done a good job but I know I constantly tell myself that I suck or I could do better.

“I’m gonna try to celebrate myself and my accomplishments more. I think we all should.”

It appears that celebrating Osaka’s accomplishments might take some time.

“I honestly don’t know when I’m going to play my next tennis match,” she said in her news conference. “I think I’m going to take a break from playing for a while.”

Hopefully, during that break, Osaka receives assistance and support from the people in her orbit: her family, her handlers and the WTA.

The world of tennis — from fans to fellow players — has celebrated Osaka and her accomplishments since she won that first major in 2018 in front of a crowd that audibly was rooting for Williams.

A pandemic robbed Osaka of feeling the true love of US Open fans when she won the event last year as she celebrated in an empty stadium. 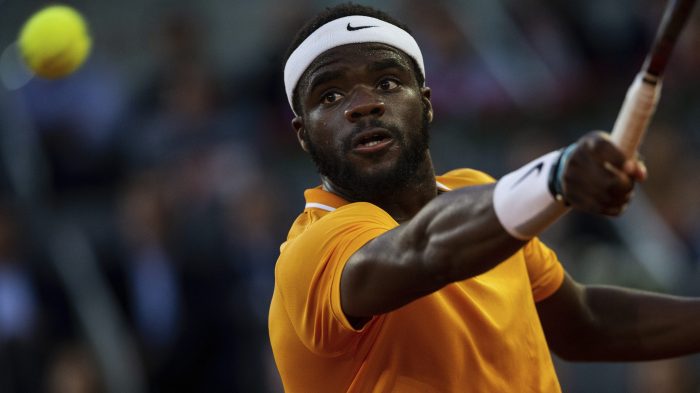 On Friday, the crowd didn’t appear to be rooting against Osaka as much as it was for an 18-year-old Fernandez, who was among several upsets that night. Before Osaka’s loss, Stefanos Tsitsipas, the No. 3 seed on the men’s side, lost to unseeded Carlos Alcaraz, who, like Fernandez, is also 18 years old. Andrey Rublev, the No. 5 seed, lost to unseeded Frances Tiafoe later in the day. Yet, Osaka acknowledged the loss felt deeper than just one match.

The message for Osaka: Take all the time you need as you step away and reflect.