The Sacramento Kings are saying Stephon Clark’s name. The Kings and Boston Celtics decided they weren’t just going to shut up and dribble or stick to sports.

Before Sunday’s game, the Kings released a video with players from both teams calling for accountability and bringing wider awareness to Clark’s death when two Sacramento, California, police officers fired 20 shots at him and killed him in his grandparents’ backyard on March 18.

During warmups, the Celtics and Kings wore shirts with #StephonClark on the back and “Accountability. We Are One” on the front.

This comes days after former Sacramento star DeMarcus Cousins offered to cover Clark’s funeral costs. Clark’s death also came days before the March for Our Lives rally calling for gun reform in the United States, which grassroots and Black Lives Matter activists have been calling for for years.

Clark was at his grandparents’ home on March 18 when two Sacramento police officers rolled up on him while doing a canvass of the neighborhood for a man who was breaking car windows.

The two officers gave Clark four seconds to comply with their commands before they fired 20 shots, killing him in the backyard. A Sacramento sheriff said that Clark was armed with a crowbar.

Do you know what they found when they rolled Clark’s limp body over? A cellphone. There was no weapon, and Clark was on his stomach when police finally did attend to him. He was 22 and the father of two little boys.

On March 22, protesters blocked fans from entering Golden 1 Center for the Kings’ game against the Atlanta Hawks, prompting the Kings to lock the doors and tell fans who were outside to go home. The Kings won, 105-90, in the delayed game in front of a small crowd.

This is a timeline of the news surrounding Clark.

R.i.p to the LOML, my husband. I’ll always love you with all of me. I’ll forever take care of our family and raise of our boys. We love you so much baby. 81095-31818 🙏🏽 “inna lillahi wa inna ilayhi raji'un” pic.twitter.com/in8rwJGvxj

Before the video was released, this was the Sacramento police’s explanation of what transpired on March 18: “Prior to the shooting, the involved officers saw the suspect facing them, advance forward with his arms extended, and holding an object in his hands. At the time of the shooting, the officers believed the suspect was pointing a firearm at them. After an exhaustive search, scene investigators did not locate any firearms. The only item found near the suspect was a cell phone.”

#StephonClark. 22. Killed by police while holding a cell phone. Human. Flesh & blood. Born with a purpose. Some will try to reason; there is no humane reason. This continues to happen because, for 100s of years, the soul & sentiment of America have denied that #BlackLivesMatter. https://t.co/D6iUOgQRsB

First the @SacPolice said they shot and killed 22 year old #StephonClark and denied him any first aid because he had a gun.

Then they said he didn't actually have a gun, but a crowbar.

Now they admit it wasn't a gun or a crowbar, but HIS CELLPHONE.

IN HIS OWN BACKYARD. pic.twitter.com/rQfwK1HCbp

Local news channels begin talking to Clark’s wife and his grandmother, Sequita Thompson, who didn’t even realize he was dead until she looked into her backyard and saw his lifeless body.

Sacramento Police said Clark fled from the officers, who "feared for their safety."
Clark's girlfriend said she knows that he was the one who "was scared for his life" in his final moments. @ABC10 #StephonClark pic.twitter.com/Vo9rw4s0Be

#StephonClark was shot twenty times and killed by the Sacramento Police on Sunday in his grandparent’s backyard.
What was he armed with?

A cell phone.
You can’t possibly be more tired of hearing this story than we are of telling it. https://t.co/Kt5ZRRrQdt pic.twitter.com/rpyNyUqNID

"He was right there, dead," said Clark’s grandmother Sequita Thompson. "And I told the officers, 'You guys are murderers, murderers.'" https://t.co/OQZ18p8Har

"He was at the wrong place at the wrong time in his own backyard?' – Sequita Thompson, grandmother of Stephon Clark.

At 6:53 p.m., the Sacramento Police Department released the audio and video of the shooting.

The officers in the video justified initiating the shooting in the body camera video by screaming Clark “had a gun” seven seconds into barging into the backyard. Four seconds later, the officers started shooting.

In the immediate aftermath, the pair took the time to ask how the other was doing. “Are you hit?” one asked. “No, I’m good,” the other responded as Clark lay motionless on his grandmother’s patio.

There was no other way to handle the situation other than ending Clark’s life? Only a month ago, we watched Nikolas Cruz, who did have a gun and killed 17 people at Marjory Stoneman Douglas High School, be tackled, apprehended alive and escorted out of the situation.

This is cold blooded execution. They shot #StephonClark 20 times, didn’t call an ambulance, & sat asking each other if they were okay.

Meanwhile an unarmed Clark died in his own backyard.😓

Police officers continued to shout at Clark’s motionless body that they would not administer aid to him until he “got rid of his weapon.” And they called for backup to approach his limp body and to apply handcuffs to him before they started CPR. The officers are on paid administrative leave, by the way.

Clark is at least the sixth person shot and killed by the Sacramento Police Department since the beginning of 2015. Five of the 6 people shot and killed have been black men. https://t.co/wC2PaxZeKG

Of the unarmed people killed by police in 2017, 35 percent of those people were black. As The Washington Post reports, Clark is the fifth black man killed by Sacramento Police Department officers since 2015. That’s out of six people.

Clark’s brother, cousin and hundreds more marched in a peaceful protest to the Kings’ Golden 1 Center. Protesters made a human chain around the entrance to the arena, and fans were forced to go home.

To be clear, protests are not supposed to be convenient. People complaining about not being able to attend a basketball game involving a team that has two times as many losses as wins are telling on themselves. The owner of the team that those folks were planning to see believes it’s his team’s duty to help heal the community and understands sports is in no way more important than someone who lost his life at the hands of a system that has repeatedly shown how little it cares about black and brown people.

Big protest for #StephonClark, the unarmed Black man who was shot and killed by police, happening in Sacramento right now. Protestors blocking the entrance to the Kings game. pic.twitter.com/e7VaJ7CwLz

Stephon Clark’s brother & cousin are leading some of the protests at the Golden 1 Center. Clark’s brother is telling everyone: This was my brother. #StephonClark @ABC10 pic.twitter.com/KMdAFmKE0h

Folks want to deny the power of sports and social action, say there is no place for politics in sports. But I'd bet there are a lot of people that hadn't heard of #StephonClark until they heard a basketball game had been delayed.

This is no small thing from @SacramentoKings owner Vivek Randivé after the team's game was disrupted by those protesting local police killing an unarmed man in his own grandmother's backyard.
Listen to what he says, and compare that to what we've heard from owners in other sports pic.twitter.com/hzy203w1VR

Justice for #StephonClark. Tough to hear about this tragedy.

I hear former Kings star DeMarcus Cousins has reached out to the family of Stephon Clark to cover funeral expenses.

Powerful moment. Stephon Clark's brother comes face to face with police officers at the protest downtown. "20 times," he says to each of them #StephonClark pic.twitter.com/vSe4S3JhFr 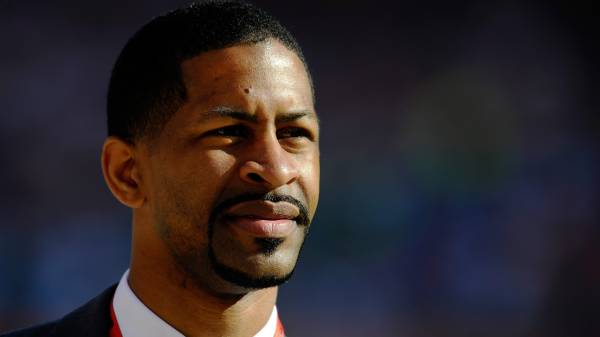 The Kings and Celtics are wearing warm-up shirts honoring Stephon Clark ahead of today's game. pic.twitter.com/V5AjQRO9RJ

This post will be updated as more information about Clark comes out, and as athletes and celebrities speak out on the matter.