Aaron Maybin: ‘Pick up a shovel and help me’

Aaron Maybin was an All-America linebacker at Penn State University and was drafted 11th overall by the Buffalo Bills in 2009. He played four seasons in the NFL for the Bills and New York Jets before retiring in 2014. He has since turned full-time to his art, chronicling his hometown’s challenges with poverty and crime through painting, photography and poetry, and he works as a teacher in Baltimore schools. Last winter, he became the outspoken face of outrage after many of Baltimore schools went without heat during extreme cold.

Here, as told to ESPN’s Kevin Van Valkenburg, Maybin tells about his journey from a life of football to working on behalf of kids from his neighborhood, how he connects with students and why he doesn’t see himself as a hero.

When I was younger, football gave me an identity.

Growing up in communities like the one I grew up in, West Baltimore, you’re always fighting for your identity. From the time you’re born until you’re grown, you’re literally inundated with stories of how your safety is always in jeopardy and how everybody – from your parents to people in the community to folks at your church – is just so hell-bent and focused on keeping you safe.

I had been an artist my whole life, but when I was younger, it was not cool for you to just be like, “Yeah I’m an artist. I make things.” Football was the first thing I did and I excelled at to the level where I gained acceptance and admiration from everybody that saw me do my thing. It was like an outlet.

Football was the first space that I was afforded where you’re not penalized for your anger. You’re celebrated for it. You knock somebody out of a game and people give you praise. They know you as this guy not to be messed with, to be respected and celebrated.

It wasn’t until I got older that I didn’t want my identity to be tied to a game anymore.

I can look at football now with a certain amount of nostalgia and not be too heavily tied to it, because at the end of the day, I stopped being tied to the game.

It was probably around college at Penn State that I realized there’s something wrong with how we were being conditioned as athletes. Even as great a coach as Joe Paterno was, he had some deep-seated issues that were rooted in race and patriarchy and bigotry that reared their heads in how we were handled as players and as men.

The idea that we couldn’t have facial hair, for example. If it was past like a five o’clock shadow, then you would get penalized. If you had locks or an Afro or something like that, he would be like, “You’ve got to do something with that.” Guys would get it braided or twisted, but as soon as he would see it, he would be like, “Cut it.” If you look at people like myself, LaVar Arrington, Jared Odrick, NaVorro Bowman, basically every black player who went to Penn State, you see them leave and go through an almost Rastafarian physical transformation where we all grow our beards out. We all either get our hair in locks or twists or cornrows.

I didn’t realize how problematic it was back then. I was young. I didn’t really understand how deep those things went and where they were coming from. I just knew that those were the guidelines that I had to abide by. We’ve got to ask ourselves why a lot more.

My first few years with the Buffalo Bills killed the love I had for the game. The little subtle comments like, “Maybe you shouldn’t do this. Maybe you shouldn’t move here. Maybe it would be better if you stayed up here instead of going home to Baltimore and being around all the thugs and hoodlums down there.” Even though I was a rookie, I had to constantly check people. Like, “Look, I signed a contract that was very clear about what I’m obligated to do. I have a father. If I really need this advice, I will call him.”

When I retired from the NFL, it was the first time that I had really been able to lock into the art studio and not give a damn about what anybody had to say about what I was about to create. Nobody can fine me, nobody can kick me off a team, nobody can tell me I’m relegated to the bench. I can do whatever I want. I just started creating.

My thing now as a father is: Why are you so quick to ask me if my kid plays football? Why not ask me if they’ve gone to a coding camp? With all due respect, it’s because you don’t expect that from my kids. You expect them to dribble a ball, to put a helmet on. There’s a condescending air to that, that always affects us in a way that it doesn’t necessarily affect other communities because you don’t even expect it from us. That’s why my kids are participating in art, in music, in learning another language, before they play in any organized sports. I’m exposing them to the world. If my kids have to play sports to accomplish success, then I failed.

Now I’m teaching at a school in West Baltimore. I was always teaching, even when I was playing. Literally, I was in the league and in OTAs for three days and then coming home for the last two to do my workshops at the end of the school year before they got out, and then having my summer camp that was art- and football-based.

Eventually, I felt unfulfilled with the idea of just going to this school or that school for a day, maybe two, and we do this workshop or this talk or whatever. There’s no sustained growth. You can’t really measure what was accomplished in that. I needed that. I needed to be able to say, “Throughout the course of this year, these are the subjects that we’ve covered. These are the debates we’ve held. These are the museums and the exhibitions that they visited and put on themselves. We’ve gone on a journey.”

I have kids that weren’t reading at the beginning of the school year that are reading now at above grade level. That’s a win. That’s a f—— win. You can’t measure it in a better way than that.

Because of the fact that I only teach a few blocks away from where I grew up, I understand my students. I know the music they listen to. I know the people in the community that they look up to. I know what they’re afraid of.

If you don’t live in that area or at least invest yourself in the area that you’re teaching in, you’re not going to have that kind of connectivity. That is what actually gives you the license to come in and educate in a way that they’re going to receive it. That’s big for me.

When Colin Kaepernick was happening, we had a long debate in my classes about what my students would have done, what they believe is the right thing to do, how we fix this stuff and why some of this stuff happens. For them, that was a very easy discussion to have. It was like, “Okay, he’s doing that. He’s right for it. Why don’t people think he should be doing it? Why aren’t more people doing this?”

The funny thing is, the realest conversations are with my third-graders. And the scary thing is that by fifth grade, these kids see the police as their enemy. They feel like they’re being targeted. They know this by the fifth grade. When I talk to them about Alton Sterling or Freddy Grey or Philando Castile or Sandra Bland, they know.

The target demographic for my book, Art Activism, was middle school and high school. But let me tell you, I’ve seen my elementary school students do more with that book that I’ve seen anybody else do. Either something inspires them to paint something or to write something, or it’s just them reading an essay or poem and seeing a street corner that they know or seeing a photo of somebody from around their way. It’s like the light bulb goes off.

There’s a lot of times where I’ll take certain songs by people that they know. We do the J. Coles and the Kendricks and Nas and all that. The other day we analyzed a Creek Boyz song, “With My Team.” If you look at the lyrics of the song, it’s powerful. They talk about how there’s too many people dying, too many people struggling with addiction, too much poverty. They’re doing it in a way that the older demographic has always shied away from because it’s so raw and so in your face. But tell me that you can’t get behind the message.

A lot of times, as soon as people hear hip-hop, they turn their noses up at it. But if you’re really going to reach these kids, it’s at the point now where it’s not even just young black kids. If you want to reach these young white kids, you’d better know something about hip-hop because they love it.

People still don’t get that you can love Mark Twain all you want, but go down to Sandtown, Freddie Grey’s neighborhood, and give one of his books to those kids and watch them rip it up and throw it in the trash. It won’t speak to them. They don’t see themselves in that. Adventures of Huckleberry Finn is never going to identify with them. Even The Catcher in the Rye, that’s not contextually relevant. But The Beast Side (by D. Watkins) and Raw Wounds (by Kondwani Fidel), these are books written by people that they either know or who understand them. They understand their language because they live around here.

All you need is to get kids hungry enough to say, “All right. Let me go and see what type of books I like.”

I’m always uncomfortable when people throw the H-word around — as in Hero — because it makes it seem like I’m special, when honestly what I’m doing is supposed to be the norm.

There are plenty of people out here like me, but because they’re not a former first-round pick, nobody cares that they get up every day and do the right thing and do the things that nobody else wants to do. If we’re going to actually make the city better, we have to make that the norm. I feel like people can conceptualize that only when they can see examples of it. 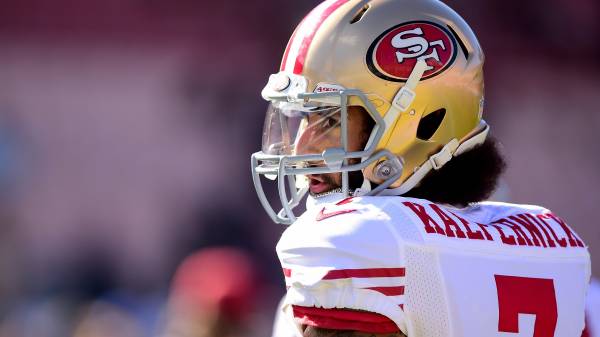 Most of the stuff I’m working on is stuff that hopefully benefits my kids. I doubt that any of this will really change my life at all. I doubt that anything that we’re working on is actually going to make me feel safer in the presence of law enforcement. I doubt that. But just because you might not be the beneficiary of the work doesn’t mean that you just sacrifice a whole generation to whatever the present state of affairs might be.

I want more people to feel like this is all of our responsibility. I feel like when you’re doing it in a way where you just put one person up on a pedestal, people tend to look up at that person in awe, and then do nothing themselves.

This Story Tagged: Aaron Maybin As Told To Education NFL The Next Chapter