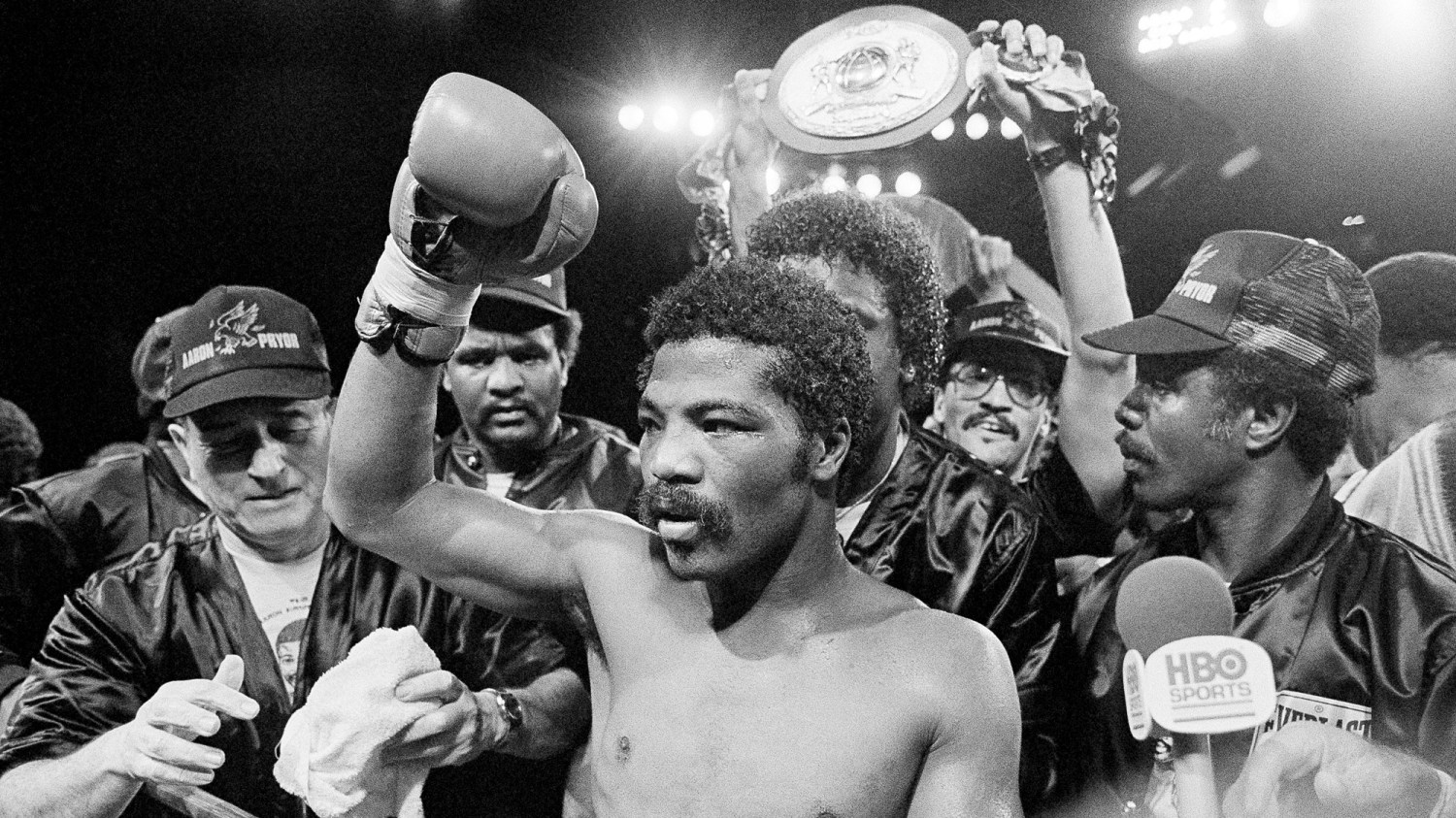 A weary looking Aaron Pryor raises a glove in victory under the junior welterweight belt, after defeating Alexis Arguello by a TKO in the 14th round in Miami, Nov. 12, 1982. AP Photo
Boxing

He was considered the No. 1 junior welterweight fighter of the 20th century

Long before cellphones and social media, word quickly spread from the Queen City Boxing Club that Olympian Sugar Ray Leonard was at the gym on the western edge of downtown Cincinnati and in need of a capable sparring partner.

In spring 1979, Aaron Pryor was the obvious choice. Pryor was one of the greatest amateur boxers: He was 204-16 as an amateur, just missed out on the famed 1976 Olympic team that included Leonard, and he was now a professional fighter who had already won his first 17 fights.

“Ray had been shadowboxing and he worked up a good sweat,” said Frankie Sims, an early trainer of Pryor’s. “We called Aaron and when he arrived, I told him to warm up, but he refused because he wanted to quickly get into the ring with Ray . . . Ray was warmed up and Aaron was still cold, but they went to war.”

Leonard entered the sparring session undefeated and was only several months away from becoming the WBC welterweight champion. Pryor, seven pounds lighter as a junior welterweight, was a year away from winning the title in his weight division. The two fighters, on the cusp of their professional peaks, met in the center of the ring on this memorable day.

“It was a fantastic sight to see,” Sims said. “Ray at his peak and Aaron was coming into his own. And Aaron had something to prove because he didn��t make the Olympic team.”

In an intense sparring session, with Sims among the handful of witnesses, Leonard controlled the first round with his jab and combinations. Leonard maintained control early in the second round, too, and a knockdown of Pryor punctuated Leonard’s dominance.

“But Aaron quickly got up from that knockdown and the tide turned in his favor,” Sims said. “Aaron was getting the best of Ray in the third round and that’s when Ray’s trainer Janks Morton said the session was over.”

Pryor, who would go on to win the junior welterweight title and finish his career at 39-1, died on Oct. 9 at his Cincinnati-area home after a long battle with heart disease. He was 60. A public memorial is scheduled to honor Pryor, nicknamed “The Hawk,” on Thursday at the Duke Energy Convention Center in Cincinnati.

“That was a great period in boxing,” Leonard said. “There were more household names then and the fans knew the value of the fighters. For example, you knew fully well that Tommy Hearns or a Roberto Duran was pay-per-view material.”

Pryor often got lost in that abundance of talent because, other than the occasional sparring session, none of the fighters from that time faced Pryor in a professional bout (Pryor defeated Hearns as an amateur in the 1976 National Golden Gloves finals). Offers were made for Pryor to fight Leonard and Duran, but the fights never materialized. Nevertheless, those fighters and true boxing fans knew Pryor was the real deal. They knew Pryor was a bad man even before his epic fights with Arguello.

Pryor was elected to the International Boxing Hall of Fame in 1996 and voted as the No. 1 junior welterweight of the 20th century by the Associated Press in 1999.

“We sparred on several occasions and we never thought we’d fight each other because of the difference in weight class,” Leonard said. “And when we did spar, once in a while I’d get him and once in a while he’d get me. But I don’t know why we never fought. It would’ve been an honor to fight Aaron Pryor.”

Pryor established himself as one of the most exciting fighters of his era because of his perpetual motion in the ring, the skill to finish his opponent with a knockout percentage of 87.5 and his ability to take a punch.

“The first time I saw him I thought he was a crazy [expletive],” said Leonard, who had known Pryor since they were amateurs. “Aaron was there among the top fighters during that time. I don’t care if Aaron was going to fight Joe Schmoe, he still had a kamikaze mentality. He had heart. He fought with conviction.”

The highlight of Pryor’s career was his two bouts with Arguello. The first took place on Nov. 12, 1982, in a classic bout that defined boxing in that era. It was the kind of fight that is rarely seen today. Everything about Pryor’s boxing prowess was on display that night in Miami. He began his onslaught with jabs, hooks, uppercuts and right hands. Later in the fight, Arguello, a three-time world champion, nailed Pryor with a right hand to the face. The punch momentarily stunned Pryor before he resumed his relentless attack.

“You could run a bull into Aaron and couldn’t knock him out,” Sims said.

Pryor went on to defeat Arguello after a barrage of punches ended the fight in the 13th round and he regained his junior welterweight title. Ring Magazine named that battle the Fight of the Decade.

“Aaron beat Arguello’s a– like he stole something,” said former heavyweight champion Larry Holmes, who dominated his division in the late 1970s and 1980s. “No one could beat Aaron. He’d throw 200 punches per round and keep going.”

The infamous black bottle incident happened in that first fight. Trainer Panama Lewis, who replaced Sims, asked the corner late in the fight to give him a black bottle that he would give Pryor between rounds. Lewis said after the fight that the bottle contained peppermint schnapps. Skeptics suggested the bottled contained stimulants. Sims was told the bottle contained a mixture of water, essence of peppermint and spirits of ammonia.

“When you get real tired and it feels like your chest was burning, this mix would open up your nostrils and lungs and the peppermint would make your lungs and nostrils feel cool,” Sims said. “There weren’t any drugs, but it was illegal.”

The two fought again in another classic bout and this time Pryor stopped Arguello in the 10th round. Those two fights mattered because they were Pryor’s two biggest victories over another legendary fighter. But those victories also created the perception that Pryor was merely a wild fighter who just overwhelmed his opponents.

“He was a finisher and that’s not a bad thing,” LaRosa said. “When Aaron would get his opponent in trouble, that’s when you saw the Tasmanian devil.”

Unfortunately, Pryor fought in a sports era stricken by substance abuse. He was among several boxers and athletes in other sports who fell short of even more greatness because of cocaine addiction. The explosion of cocaine in the 1980s and especially crack led to the deaths of Cleveland Browns defensive back Don Rogers and Maryland basketball star Len Bias.

Pryor is a cautionary tale. He was a victim of that particular time but he was also a victim of his own success. He couldn’t handle it as the downward spiral began after he retired a few weeks after the second Arguello fight. He began his dance with crack cocaine and that included drug binges in a house he owned in Miami. Pryor managed to return to the ring to win the newly formed International Boxing Federation junior welterweight title in 1984. He lost the title the following year because of inactivity and he retired once again. Pryor sank deeper into drug despair. He was shot during an abduction by drug dealers. Pryor was accused of kidnapping and rape and the weight loss he experienced was concerning.

“He called me to come get him because he wanted to make a comeback,” LaRosa said. “He looked so bad when we found him. He looked like he was living in a concentration camp because he was so skinny.”

Pryor made another return in 1987 and wasn’t nearly the fighter he had been before the drugs zapped his ability, and he lost for the first time. More drugs and a detached retina finally ended his boxing career in 1990. There was an arrest on drug charges a year after his last fight in Cincinnati. He served three months in jail for possession. Not long after his jail stint, Pryor suffered from a severe ulcer. He sat in a hospital bed and asked God to deliver him from his addiction, said one of Pryor’s sons, Stephan Pryor-Mitchell. He went to church the following Sunday and was drug-free from 1993 until his death.

“The doctors told him if he continued to do drugs that he would die,” Pryor-Mitchell said. “He bounced back strong like he was in training mode.”

He became a deacon and then associate minister at New Friendship Baptist Church and a boxing trainer.

“I joined the church because he was there,” said Pryor-Mitchell, 39. “He used to tell me that he jumped rope when he trained as a boxer. Until he died, he jumped for joy for God. He made his biggest comeback outside of the ring — like a true champion.”

Since ’93, Pryor helped train amateur and professional fighters in several different gyms in the Cincinnati area. One of his students was teenage Adrien Broner, the former light welterweight champion. Pryor also earned income by selling his own memorabilia and by sharing his story on the speaking circuit. In 2000, he was honored for his community service in Kentucky and Cincinnati. Former New York Jets coach Eric Mangini brought Pryor in to speak to his team in 2006.

Pryor became an even bigger champion for his family, thanks to the support provided by his long-time partner and wife Frankie. She was also a recovering addict and she helped Pryor overcome his addiction. When Pryor got clean, Frankie set up a reunion among Pryor’s sons (Aaron Jr., Antwan Harris and Pryor-Mitchell), who each have different mothers. Pryor also had a daughter, Elizabeth Wagner.

“This was at a time when Aaron was just recovering and he asked for that,” Pryor-Mitchell said. “He wanted his male children to get together. Frankie hooked it up. That was true love on her part.”

Harris lives in Oklahoma. Aaron Jr., 38, and Pryor-Mitchell, 42, are residents of Cincinnati and Pryor tried to make up for lost time when he trained his two sons in his craft. Both fighters became pros. Pryor-Mitchell (10-3-1) has not fought since 2007. Aaron Jr. (19-10-2) is a super middleweight. The training was especially meaningful for Pryor-Mitchell, who did not find out Pryor was his father until his mother told him during Pryor’s first fight against Arguello.

“Years later, when he was making one of his comebacks and working out at the Emmanuel Center, I consistently went down there and watched him train, never telling him who I was,” Pryor-Mitchell said. “Sometime later my mom introduced us and he recognized me as the kid from the gym. We bonded ever since.”

Pryor’s bond with his family and city remains strong. His website and Facebook page are filled with condolences and appreciation for his contributions to the community, overcoming his demons, and his exciting boxing style.

LaRosa does not expect to see another fighter like Pryor.

“I’m not sure if that void will ever be filled, because of Aaron’s talent,” said LaRosa, founder of Over-The-Rhine Boxing Center. “No fighter fights with the excitement Aaron brought. He’s certainly going to be missed around here. Aaron would take the kids on the corner out to get ice cream. He was tough in the ring but a sweetheart outside of it.”