That the disgraced champ was living the Vegas life of drugs and broken dreams, we know. But how did it end?

When the heavyweight champion Sonny Liston is mentioned these days, it’s usually in relief, either as the supremely selfish figure who sat out the civil rights era, or the fall guy in the most iconic sports image of the 20th century — the one where Muhammad Ali stands over his supine frame, growling at him to get up from the canvas, which Liston seemed suspiciously eager to reach after giving up the title in their prior meeting. Cries of fix rained down on Liston that day in 1965, and in the aftermath he was banned from boxing and branded a traitor for tarnishing the heavyweight crown.

Five years after that loss, however, Liston had settled into the comforting seams of Las Vegas. He was filming bit roles in movies, dealing cocaine on The Strip and spending his nights in the dingy bars of the town’s segregated Westside. His birth certificate listed his age as 38, but he was probably in his mid-40s when his wife returned home from a Christmas vacation in January 1971 to find him slumped lifelessly backward over their bed in an advanced state of decomposition. Although his death was untimely, the sports world reacted much as his friends in Vegas did: with a shrug. An ignoble end seemed inevitable for a man who lived as carelessly as Liston did.

Still, the coroner’s conclusion — natural causes — was deeply unsatisfying. Liston was a menacing slab of manhood. Immutable. Impervious. Impossible. The smart money speculated that the coroner was hiding something. Friends dismissed the idea that heroin metabolites in his blood signaled an accidental overdose. The rumor mill churned: Liston was murdered.

Four decades later, I was looking for a cold case to crack when I decided to dig into the story. At first glance, it seemed unlikely that there was much to add to what the great writers — Nick Tosches, David Remnick, James Baldwin — had already chewed over. There was also an HBO documentary from 1995, The Mysterious Life and Death of A Champion, readily viewable on YouTube. It seemed there was little left to uncover.

But then I got an idea that excited me: What if I looked, specifically, at the last year of Liston’s life? What if I took a trip back to Las Vegas in 1970, when Liston was driving his pink Caddy convertible down The Strip, past the awnings advertising Elvis Presley and Frank Sinatra, as if no one could touch him? With that laser focus, maybe I could turn up a few things others had not.

Libraries are still great places, and the University of Nevada helped kick-start the idea by sending microfilm of the Las Vegas Sun and Review-Journal to me at the New York Public Library. Over six weeks, my wife, Ellen, looked at every word of every paper from 1970, finding the kinds of connections between cops, politicians, mobsters and gamblers that at first blush had nothing to do with sports, but wound up having everything to do with Liston.

For instance, there was the front-page story about a drug raid that netted a local heroin dealer. I tracked down the lead agent, who distinctly remembered the raid because of something that was never reported: He found Liston under a cloud of smoke in the house, and nearly had to shoot the champ when Liston started advancing on him.

Other connections took me down other alleys. President Richard Nixon’s war on drugs led to an undercover fed who shadowed Liston at the International Hotel, where intelligence reports indicated he was selling cocaine out of the keno room. An election for sheriff of Clark County wound up looming large in the story. And a bandleader who led a double life turned into a major character, thanks to the memories of his son, a best-selling musician in his own right.

With the help of the Vegas documentarian Stan Armstrong, I knocked on doors in the Westside and met old timers who remembered Liston at his best and worst and provided details that illuminated the perilous road he was barreling down. 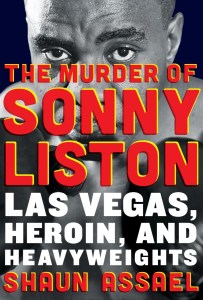 But the book didn’t really take shape until I got hold of an interview that a police informant gave a dozen years after Liston’s death. In 1982, the snitch walked into Las Vegas Metro headquarters with an explosive story to tell, and he repeated it that same year to a reporter for Sports Illustrated. The 170-page transcript of his interview never led to a story in the magazine, no doubt because it was so hard to verify and almost everyone he accused of criminal conduct was still alive.

But 32 years later, I drove five hours north of Las Vegas — down a one-lane highway where vultures circled above — to meet the sergeant who debriefed the snitch. The result is excerpted here.

The snitch’s story has its holes. But it’s exceptionally vivid when it comes to period piece details that I’ve tried to bring to life in this book.

Las Vegas was good to Liston. The local cops looked the other way as he drove drunk. He had an institutional supply of prostitutes and showgirls. And he was able to bask in the C-list celebrity that Vegas is so good at nurturing.

But, in the end, there was one thing that Las Vegas never gave Liston.

It never gave him a homicide investigation.

Shaun Assael is a writer for ESPN's Investigations Unit.