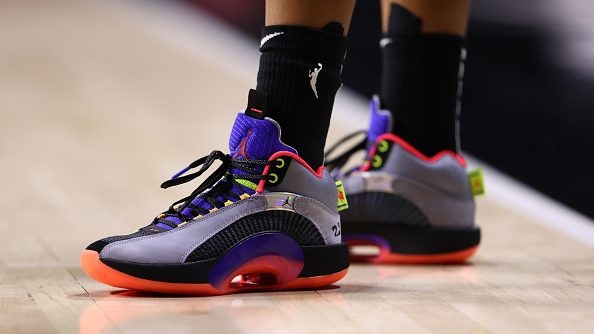 The sneakers worn by Kia Nurse of the New York Liberty during the game against the Indiana Fever on Sept. 10 at Feld Entertainment Center in Palmetto, Florida. Ned Dishman/NBAE via Getty Images

In February 1990, the soon-to-be 27-year-old Michael Jordan unveiled the Air Jordan 5 for the first time during NBA All-Star Weekend in Miami. He wore a “Fire Red” colorway during his first career 3-point shootout appearance before lacing up the “Metallic” colorway in the All-Star Game.

A season before Jordan and the Bulls would claim their first NBA title, a changing of the guard was taking shape in the league. And as Jordan’s game evolved, his kicks kept up with his on-court style.

Thirty years later, the evolution of the signature line continues with the Air Jordan 35, officially announced by the Jordan Brand on Thursday ahead of its Sept. 27 drop in China and Oct. 17 global release. The latest model features an updated version of the “eclipse plate,” propulsion and stabilization technology introduced on last year’s Air Jordan 34, while paying homage to the 30-year-old Air Jordan 5 through the shoe’s tongue design and heel molding.

“We were really looking to push performance first,” said Jordan Brand senior footwear designer Tate Kuerbis. “Push the future as much as possible but also respect the past.”

“Athletes are changing,” Nurse said. “The way our bodies respond to the game is changing just simply because we play in different ways now. We play a lot of small ball, get more minutes and play in an era where you’re training all the time. So your body must find ways to recover. And a big part of that is having a shoe that’s going to fit you right, that’s going to feel right while you play, because your feet are essentially your moneymakers. They’re the most important parts of your body as a basketball player.” 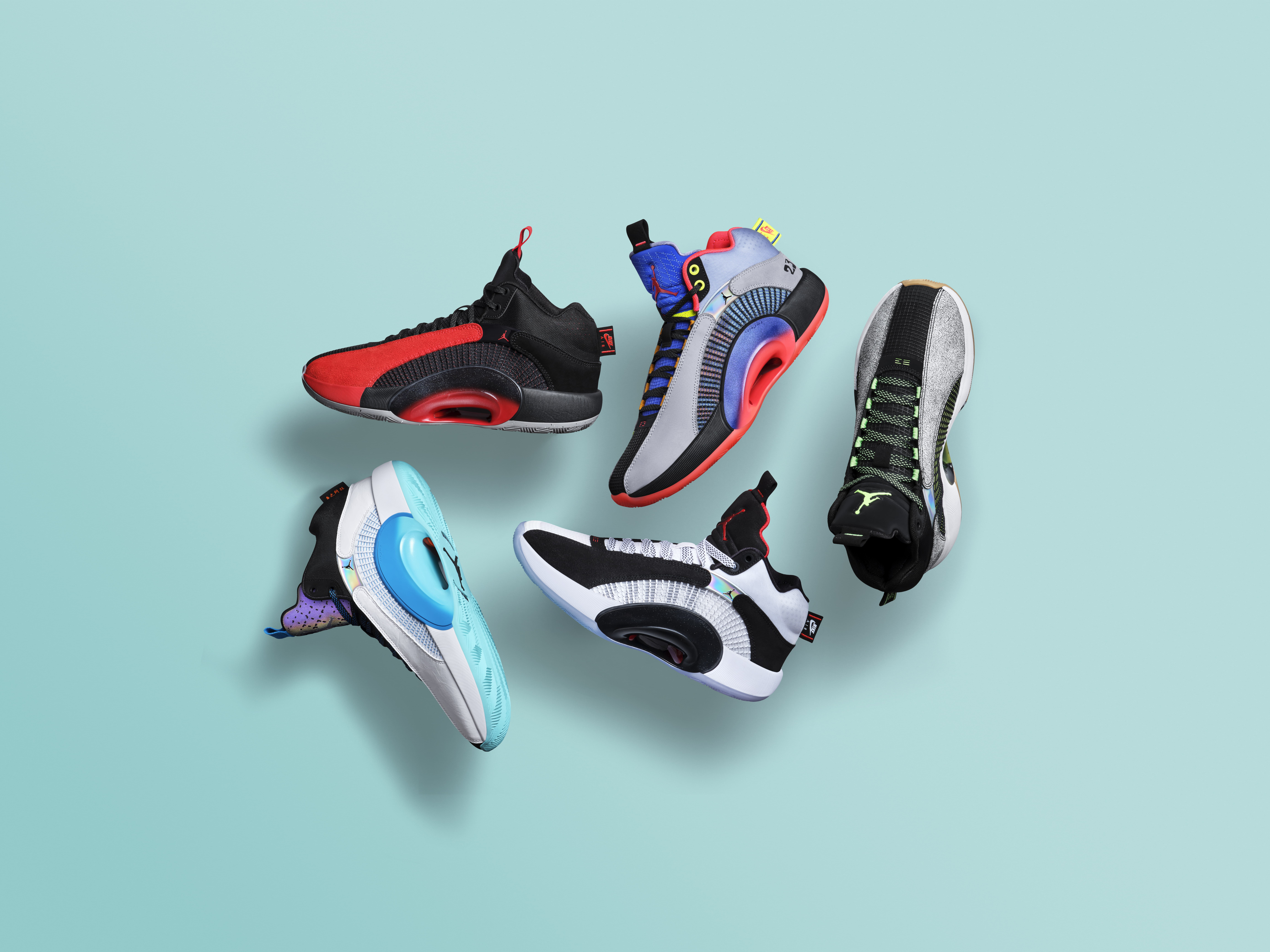 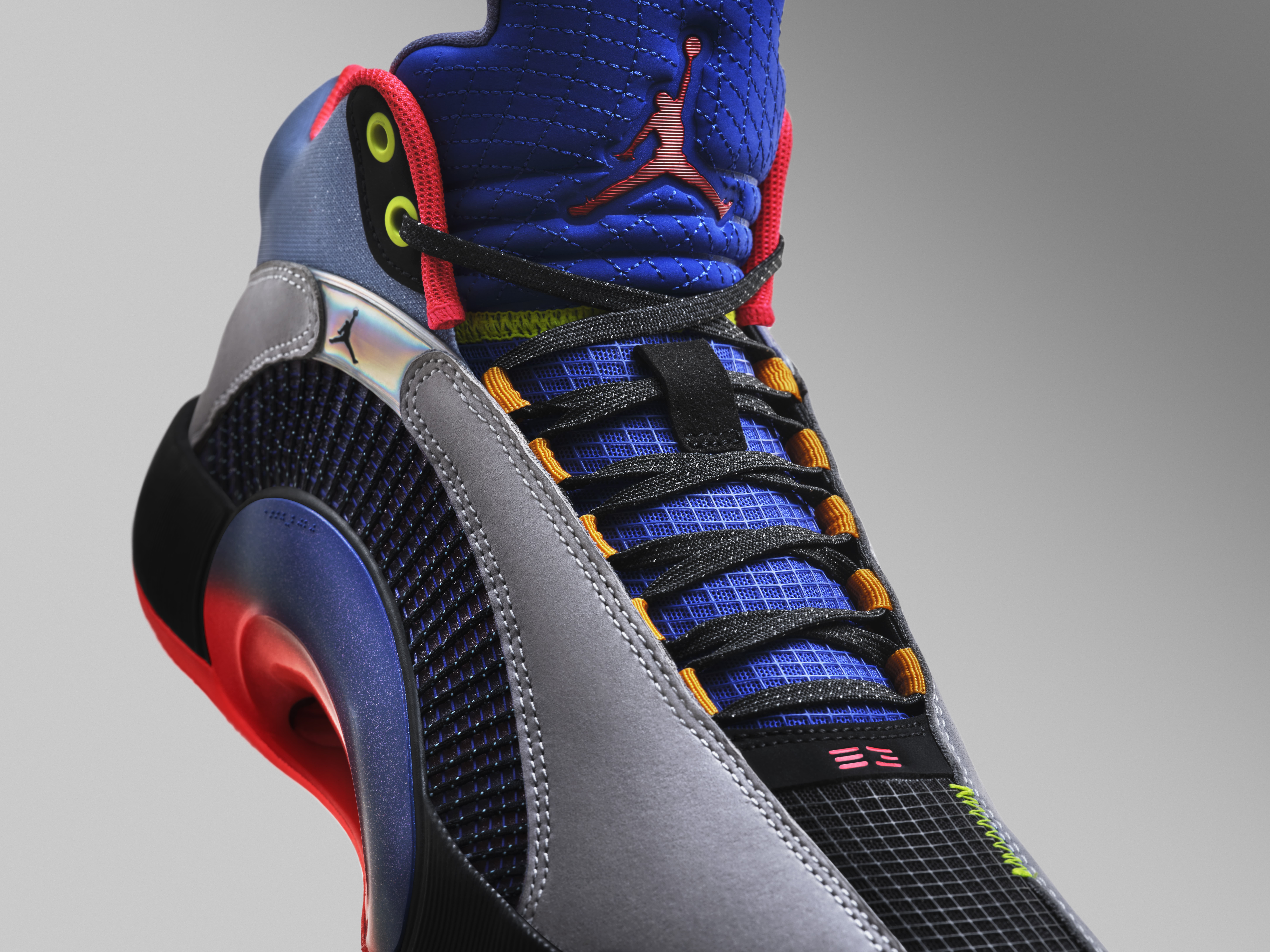 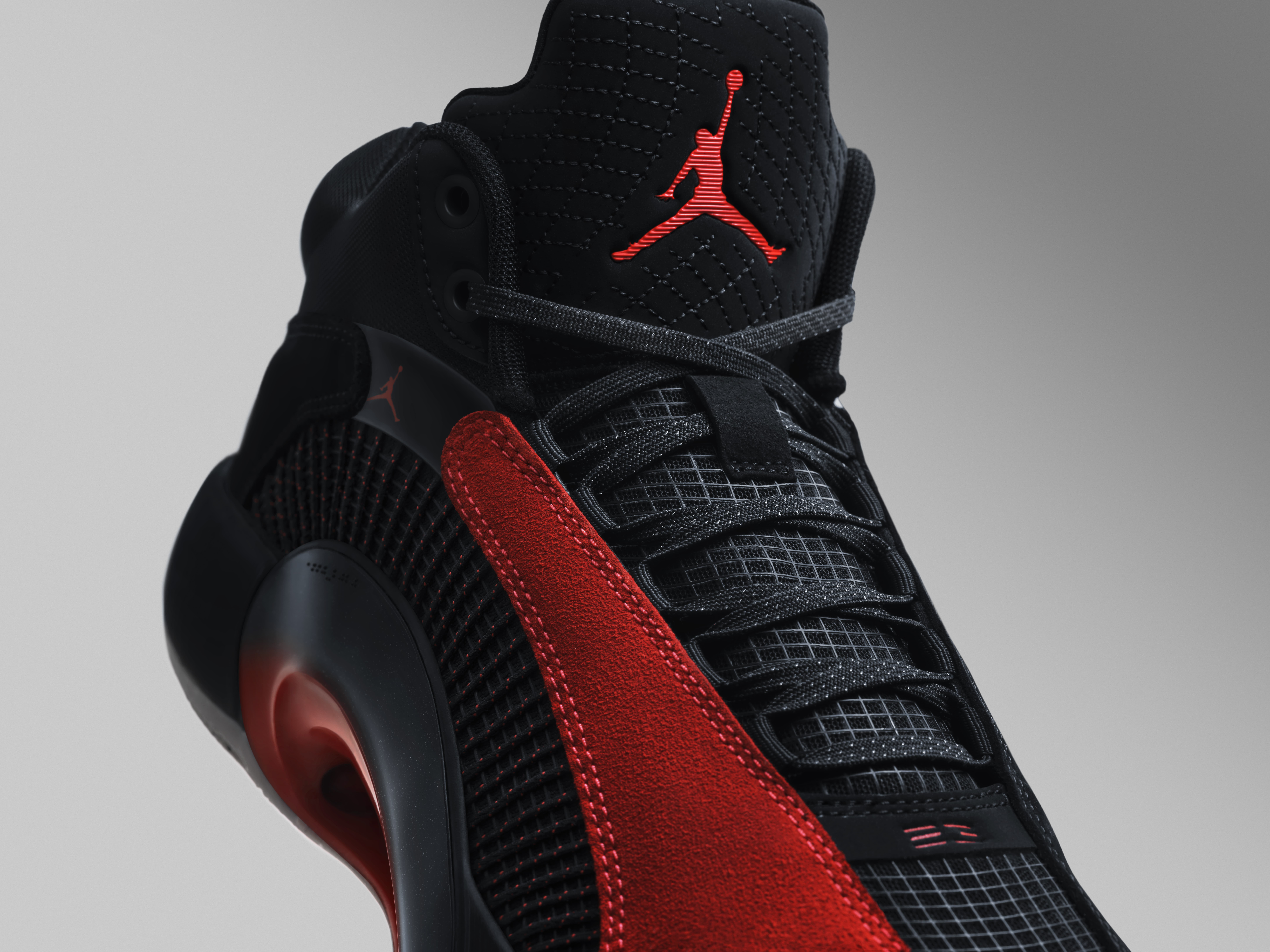 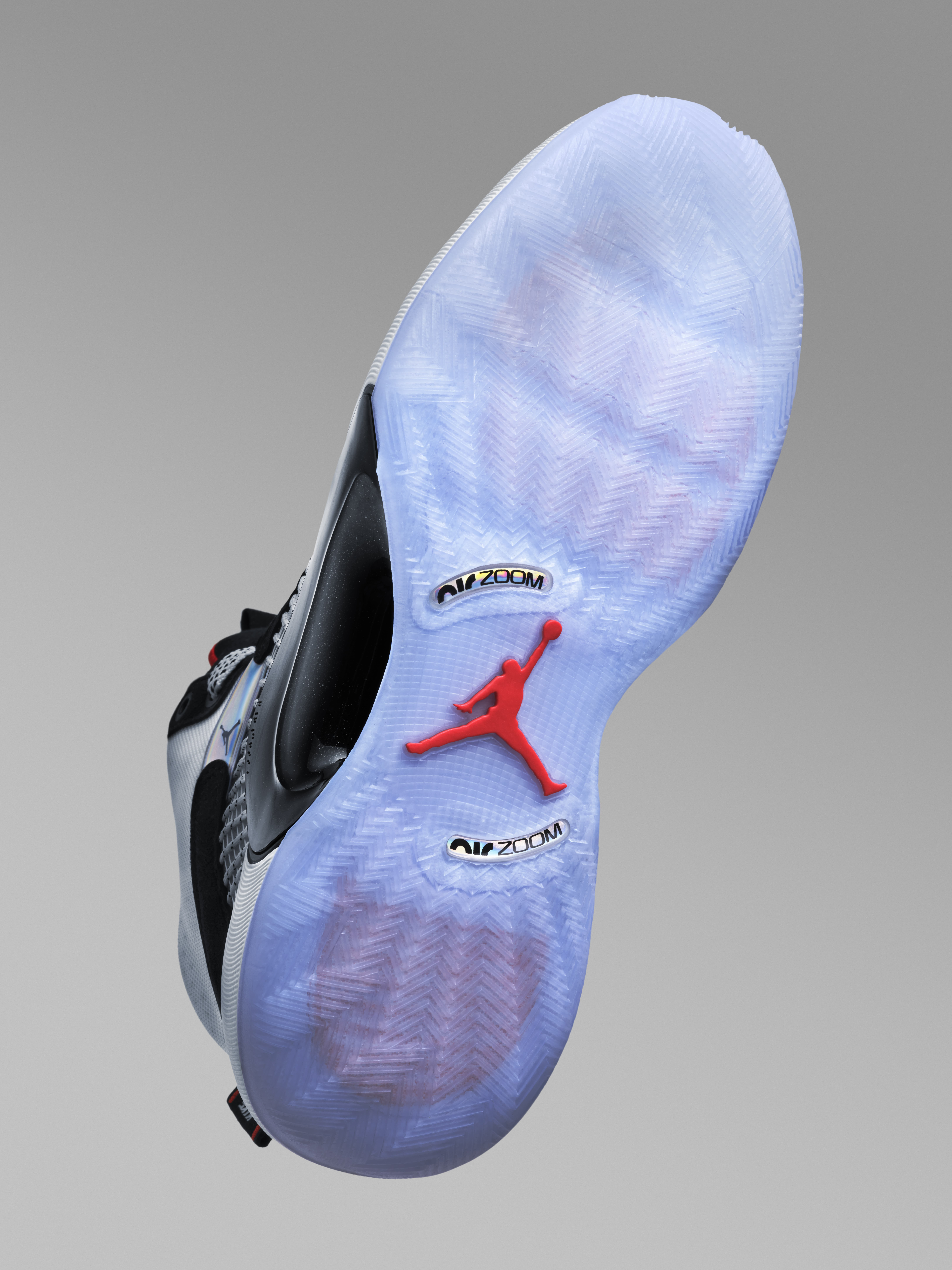 Nurse recalled the first time she picked up a pair of Air Jordan 35s, which reminded her of the shoe she spent the past year wearing on the court. The 34 debuted in 2019 as one of the lightest models in the Air Jordan series, a trend that continues with the 35.

“I really love the feel and lightness of the 35,” Nurse said. “As soon as I put a shoe in my hand, that’s when I can tell if it is going to be good for me in terms of being able to move in it and cut and make a lot of different changes of speed. So it was big for me just looking at it and feeling how light it was.

“I’m excited to continue to wear the 35 throughout games for the next year. I think it represents an ability to see the game is changing and that shoes are changing along with it.”

For Kuerbis and the brand, the Air Jordan 34 presented a tough act to follow, in part because of the player exclusive (PE) 34s that Jordan Brand athletes received. Tatum alone wore at least 20 different pairs of 34 PEs during the 2019-20 NBA season, designed in themes inspired by his hometown of St. Louis, holidays, favorite foods, revered past Air Jordan models and his 2-year-old son, Deuce. In July, Tatum, Hachimura and Williamson each had pairs of their personally designed PEs released by the brand at retail. And inside the WNBA bubble, Nurse cycled through a 10-pair set of her own 34s as the league’s queen of PEs.

“My favorite 34 PE? That is an impossible question … All of them have a different meaning to me, so I love them all,” said Tatum, who joined Jordan in 2019 after spending his first two NBA seasons with Nike. The Celtics star has stuck to wearing his 34 PEs throughout the 2020 NBA playoffs, though his teammate and fellow Jordan Brand athlete Kemba Walker donned the Air Jordan 35 in Game 4 of the Eastern Conference finals.

“The Air Jordan 34 came out the first year I was with the brand,” Tatum said. “So I will always remember being one of the faces of the shoe.”

This season, Tatum was a part of a deep collection of athletes who rocked the 34s. Carmelo Anthony wore them the night he returned to the league after more than a year away, Doncic did so in his NBA All-Star Game debut and Williamson exclusively throughout his highly anticipated rookie season.

“We honestly designed the 34 before we even knew we were gonna sign Zion,” Kuerbis said of Williamson, who joined the Jordan Brand in July 2019 after inking one of the richest rookie shoe deals ever. “Seeing Zion wearing the 34s and what he was able to do in them, it’s crazy. He’s a phenomenon on the court. He’s a beast on the court. Taking some of the learnings from the 34 — what some of our athletes were doing in that shoe — and being able to improve them for the 35 was superimportant.”

Techwise, the 34 introduced the eclipse plate that forms a cove at the center of the sneaker’s midsole, designed with a composition focused on heel stability to give “more control to basketball’s full range of explosive movements: cuts, sprints, jumps,” according to Nike. The innovation returns on the 35 as the “eclipse plate 2.0.”

“The idea of removing material and being able to see the technology — the eclipse plate — was something really new for the Air Jordan line,” Kuerbis said. “As we moved on to the Air Jordan 35, we didn’t want to jump off the eclipse plate and go somewhere else. We thought, ‘This is a way we could improve this and make it even better.’ … The cool thing about this new eclipse plate is it actually comes up onto your foot, which helps for when you’re cutting in terms of lateral support and containment.”

While crafting the Air Jordan 35, Kuerbis found inspiration from watching the brand’s promising young athletes on the court — similar to Hatfield’s design process with Jordan from the late 1980s through the ’90s, and Kuerbis’ memories from the early 2000s.

“Working on the 35 was very similar to how we did it with MJ,” said Kuerbis, the designer behind several previous Air Jordan models, including the 31 through 34, the 19 and the 18, the final signature sneaker of Jordan’s NBA career, which he wore during the 2002-03 season. “When I worked on the Air Jordan 18, that was the last year MJ played, but he was doing things on the court at that age that people really hadn’t seen before. He was doing things that were magical. You were just blown away watching him. And I think that’s happening right now with Zion, Luka and Tatum.

“Watching Zion, you get almost the same feeling. It’s different — he’s not Michael Jordan, but he’s doing things so powerful, so effortlessly. It’s that type of excitement that I draw inspiration from to design product that’ll make athletes perform better on the court.”

For the next year, Doncic, Hachimura, Tatum, Williamson and Nurse, who are younger than Jordan was the season he debuted the Air Jordan 5, will headline the 35 as they continue to make their mark.

“When it comes to myself and other young guys that are continuing to evolve but have arrived and already had such an impact on the game,” Tatum said, “I think we and the Air Jordan 35 will go hand in hand.”