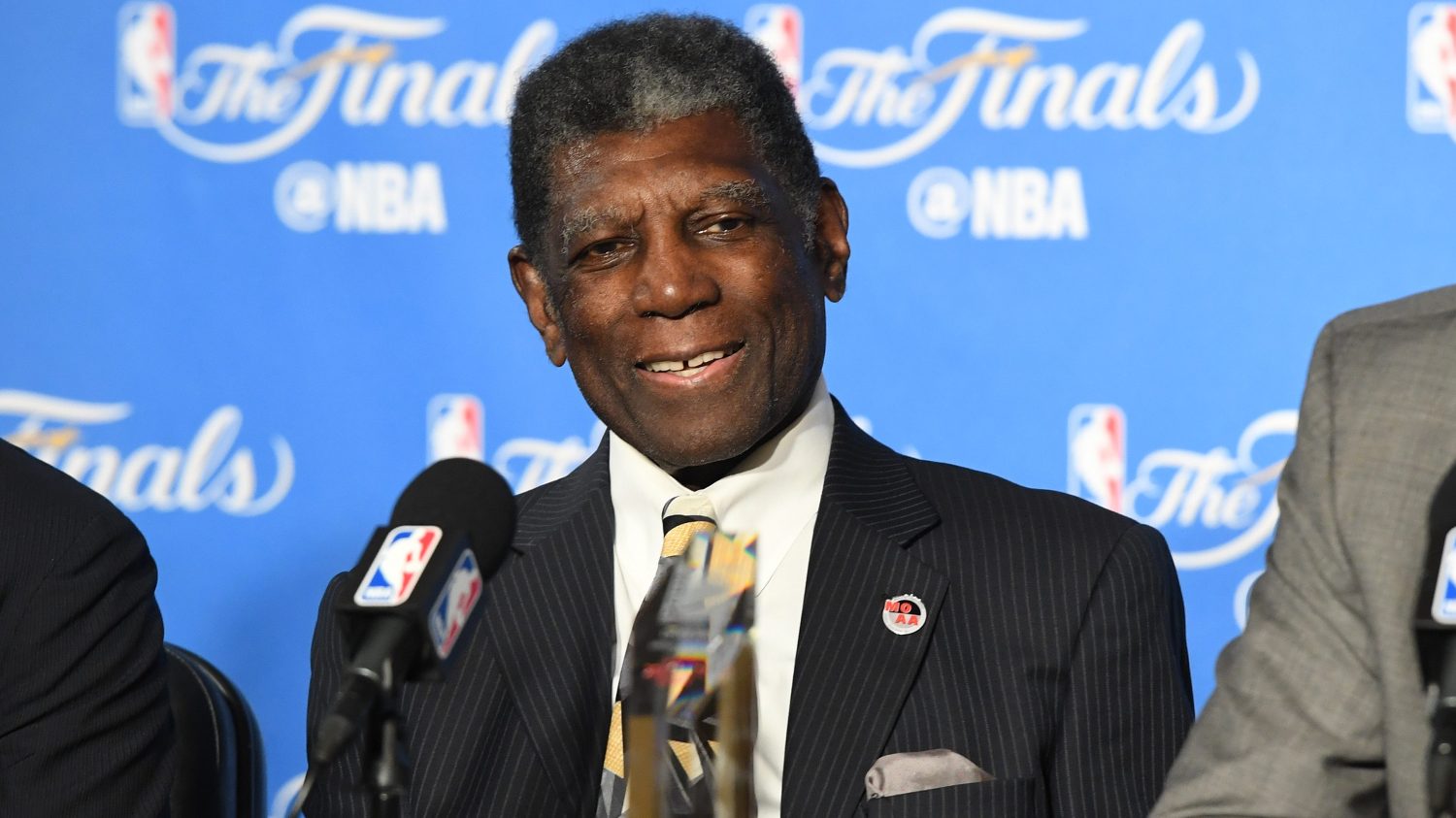 Former Warriors coach Al Attles receives the Chuck Daly Lifetime Achievement Award before Game 2 of the 2017 NBA Finals between the Cleveland Cavaliers and the Golden State Warriors on June 4, 2017, at Oracle Arena in Oakland, California. Garrett Ellwood/NBAE via Getty Images
As Told To

‘All you can do as a player is play. It’s up to other people to decide if you get on the list or not. So I made it.’

OAKLAND, Calif. — Near Al Attles’ favorite lounge chair in the living room hangs a collage of framed pictures representing different eras of his life. There’s one of him playing college ball at North Carolina A&T, another of him as a guard for the Philadelphia Warriors, one as a championship-winning head coach and another as a community ambassador.

On Friday, Attles, 82, will add another chapter to his career when he is finally inducted into the Naismith Memorial Basketball Hall of Fame as a contributor. Known as “The Destroyer” during his defensive-minded playing days, Attles became the second African American head coach to lead a team to an NBA championship when the Warriors won in 1975. And no one has worked with one franchise longer than the former Warriors player, head coach and general manager.

Because of health issues, Attles rarely does interviews anymore. But he recently spoke with The Undefeated to reflect upon his career, former teammate Wilt Chamberlain and the time soul legend James Brown challenged him to a game of one-on-one.

How have I been with the Warriors for 60 years? As I like to say, they never caught up to me. 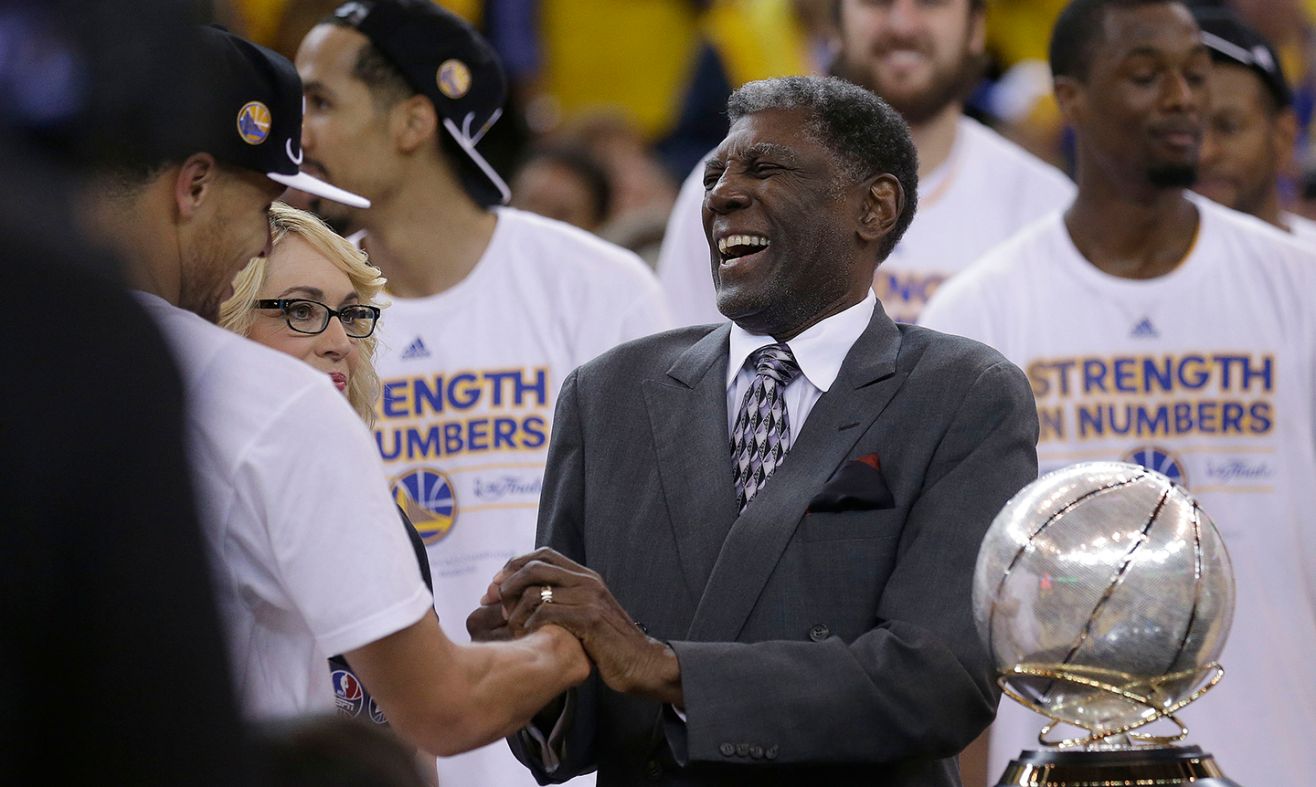 North Carolina A&T made sure that you did what was necessary. They wanted to make sure that anybody that graduated from this black school, you’re going to do the things necessary to be on the scale with other people.

I buckled down, and you’d be surprised the grades that I got in college. I actually made a decision that I wasn’t going to play basketball again after I finished college.

My high school coach and another teacher in my high school talked me into going and just trying out [for the Warriors]. My college and high school coach told me, ‘You can make the team.’ I said ‘OK, I tell you what, I’ll go and try out and I’ll come back and teach school in Newark.’ I actually had accepted a teaching job in Newark.

But I got lucky and I went to the Warriors. That’s just the way things work.

I was going to make either $1,000 playing or teaching. The difference was it was $1,000 to play for six months and what I made teaching school was going to be for nine months. Money wasn’t the reason that guys played back then. Obviously the guys at the top, the Bill Russells and guys like that, they got paid a lot of money. Guys like myself, they just went there hoping that they make the team and then down the road they might get paid. 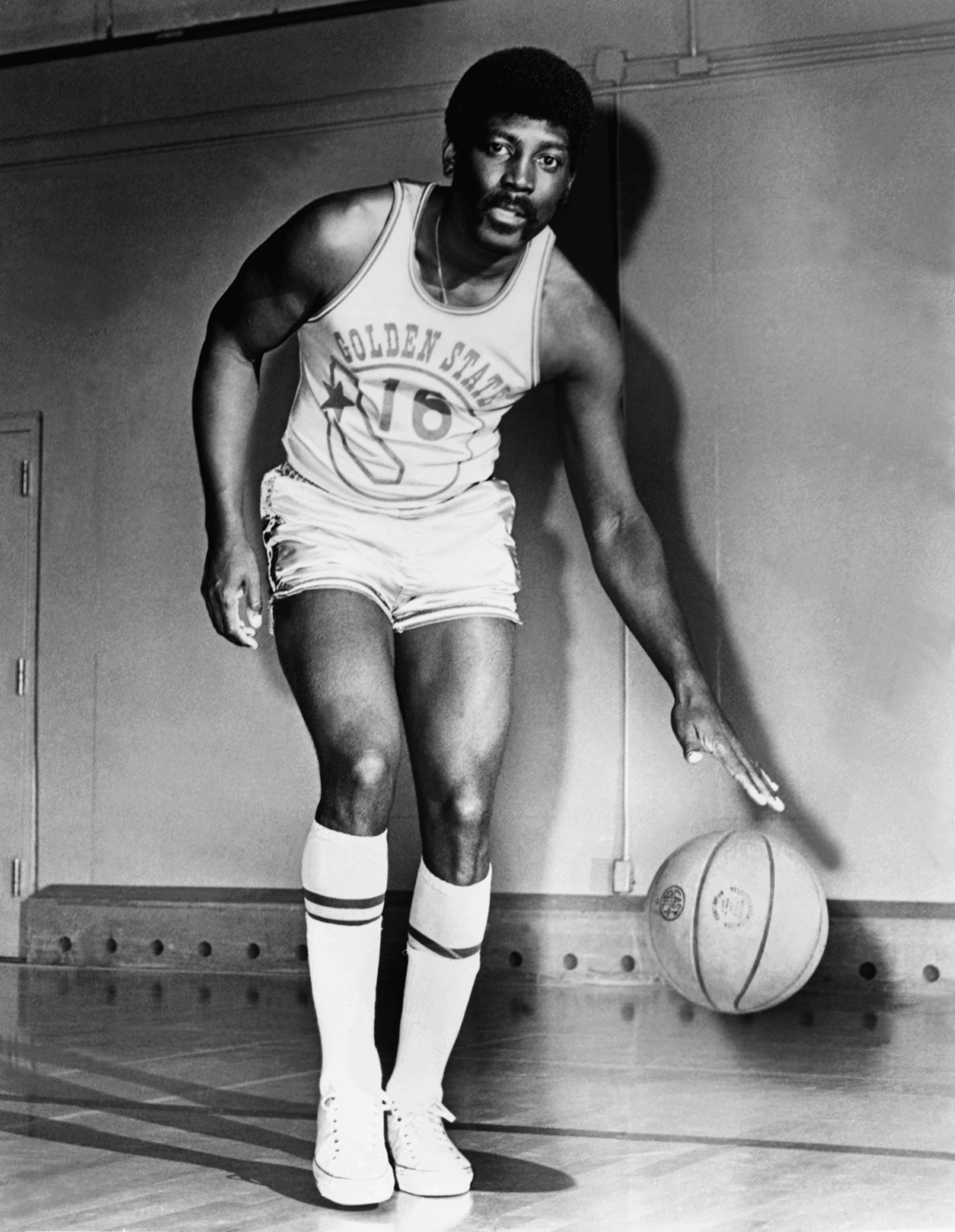 ‘Wilt and I once combined to score 117 points’

The truth: Wilt was like a Greek god. There’s a word that’s very important in the English language; that word is jealousy. And unfortunately, and I’d better say this delicately, but I’m going to mean every word I say about it. Sometimes people who look like us, when they move up the ladder, there’s a jealousy out there from people who don’t look like us who are jealous of them moving up. They were jealous about the amount of money he made, the attention that he got from the media, the attention that he got from people. 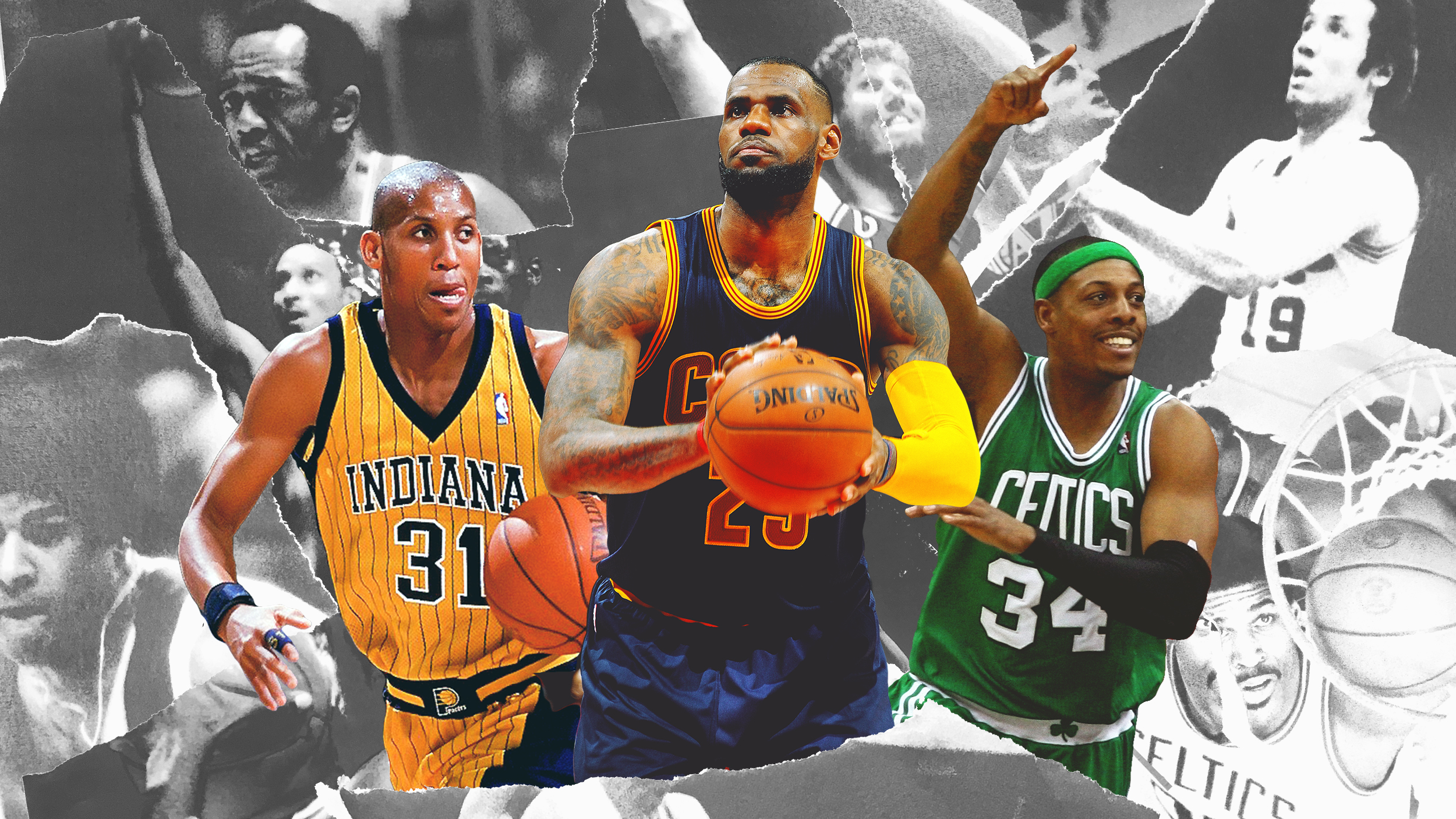 For those of us that were close to him, we knew him from a different place.

He liked one nickname. It was ‘The Big Dipper.’ I don’t think he liked ‘Wilt the Stilt.’ No, no, no, no. Not many people call him ‘Stilt.’ Not me. In a nice way, he’d look at you funny if you started calling him ‘Stilt.’ Call him ‘Big Dipper,’ he liked that. But you couldn’t call him the ‘Stilt.’

We used to have races, and I wasn’t the slowest guy in the world, but I would beat him by a step. He would lie and say I didn’t beat him. ‘Wilt, I beat you.’ ‘No, you didn’t. That guy ran in front of me.’ ‘Wilt, Wilt. I beat you. I can’t outscore you, but I beat you.’ I got to know Wilt very close to where I could talk to him.

When Wilt scored 100, the announcer was saying on the loudspeaker, ‘That’s 80. … That’s 82.’ And once he got close to 100, we weren’t only concerned about that, but the people doing the scorebook for the team, they would come by and say, ‘You know, Wilt … we’re getting close.’ But Wilt would never say, ‘Give me the ball.’ But we would say, ‘Give him the ball.’

Wilt Chamberlain and I once combined to score 117 points. That is a fact.

We couldn’t believe Wilt got traded (to the Los Angeles Lakers on July 9, 1968, for Jerry Chambers, Archie Clark and Darrall Imhoff). We didn’t have anybody on our team other than Wilt. When we heard that he was being traded, I said, ‘You got to be kidding me. They aren’t going to trade Wilt Chamberlain.’ We read about the possibility. But when they finally did it, we didn’t realize this until I got older that it had to do with money more than it had to do with some other things. …

Back then money was a big issue. All I had to do was look at my paycheck and you could tell it was.

Wilt would be Wilt. I don’t think I’ve ever met anybody close to doing what he was.

Entertainers think that they can do it pretty well as an athlete. ‘I can outrun him or I can do this better than he did.’ Well, we will go and see. We’ll go and see.

James Brown wanted to play me one-on-one. But I didn’t want to embarrass him. I told him, ‘I was in the band in high school and in college. I played the drums. But I couldn’t play in the James Brown Band.’ I would laugh and say, ‘I can’t play in your band. No. But guess what, you can’t play on my team either.’

What do I gain by playing him? If I win, I’m supposed to win. If I lose, he tells everybody in the world. No, no, no.

‘It wasn’t that I wanted to retire …’

They talked to me about being the coach. And it wasn’t that I wanted to retire. But I figured, well, if I’m going to be the coach, I can’t be playing. You can’t be the player and the coach for a short period of time, because you can’t go up there and tell them they’re doing something wrong when you’re doing the same thing wrong. So I became a coach.

I didn’t want it. And then [former Warriors owner] Mr. [Franklin] Mieuli, he talked me into it. He was like a second father to me. We were very close. He just told me that he thought that I could really do some great things as a coach that I couldn’t do as a player. As a player you only think about one thing: playing. The coach, you got to do all these other things. I didn’t want to do them all, so I got an assistant coach.

There was just one black coach at that time: Bill Russell. But he was a player-coach at first. Lenny [Wilkens] and I came in the same year. Well, and Earl Lloyd was one, too, before us. I give the owners credit for making it happen.

I never had any problems with any white players. Maybe something was going on that I didn’t know about or hear about. But I never even thought about that one way or another. The guys were very, very accommodating, and back then a lot of them were concerned about their job. They knew that if you didn’t get along with the guy who was the coach because of what he looked like, you weren’t going to be on the team. And once you got a bad reputation, other teams didn’t want you. So I didn’t have a problem with that.

Coaching the Warriors to the 1975 NBA championship was not so much for me personally, but it was for the players. Only one team wins the championship. So maybe the other people you talk to might be pissed off about it, so I don’t talk about it. But, oh, it was terrific.

I’m looking forward to the Hall of Fame. I look forward to seeing people who are friends of mine. All you can do as a player is play. It’s up to other people to decide if you get on the list or not. So I made it.

I’m very happy, but I’m happier for other people. I’m happy for [my wife]. My wife is very, very good to me. I would be away and she really kept the life for the family going. And I don’t tell her this all the time because she’ll be cocky, but she really, really kept us on the right track and made sure that I didn’t have to be concerned about a lot of family things until the season was over.

My legacy? Just do what I think is the right thing. That’s all I concern myself with.