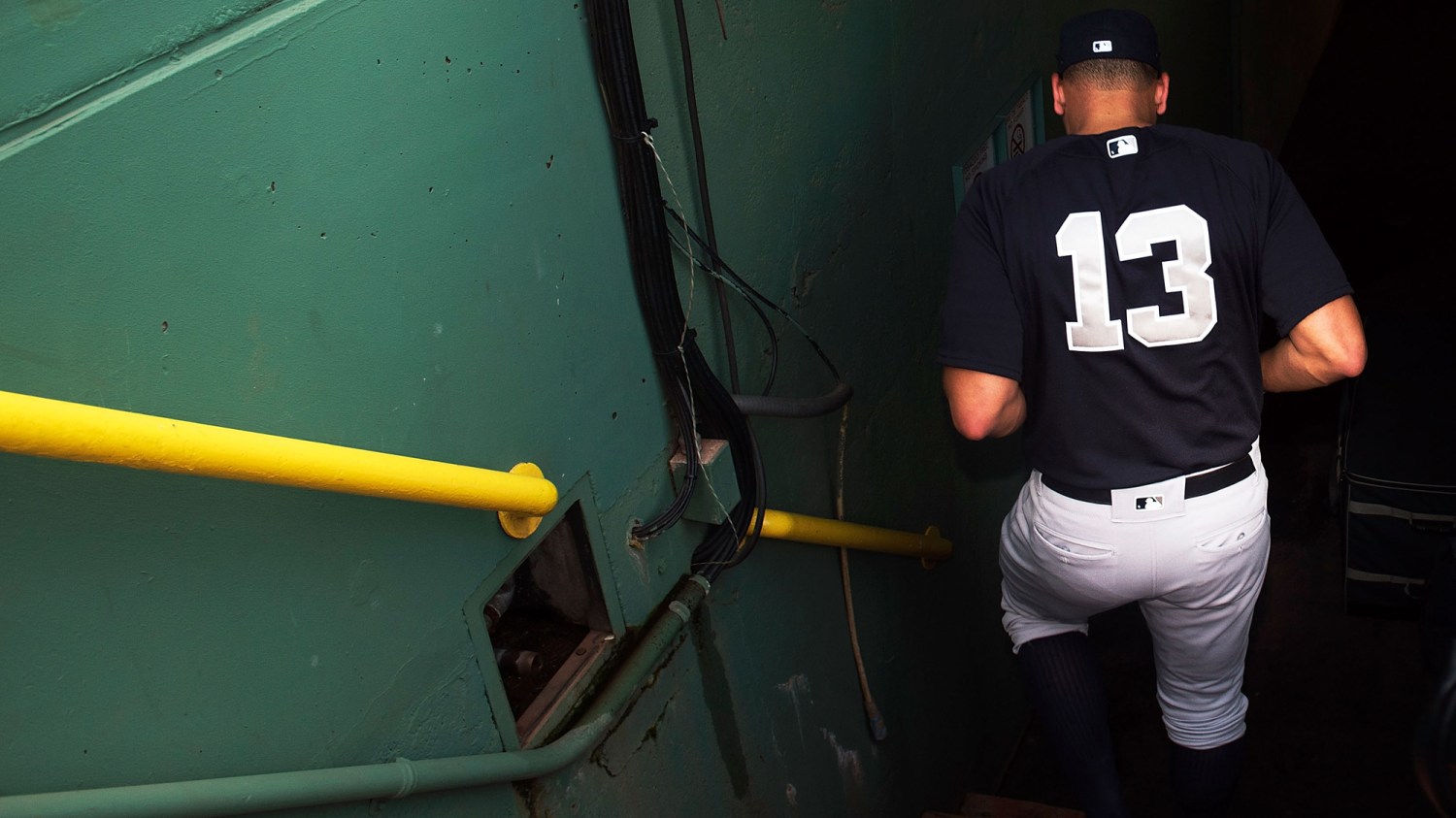 Alex Rodriguez #13 of the New York Yankees enters the dugout before the game against the Boston Red Sox at Fenway Park on August 9, 2016 in Boston, Massachusetts. Adam Glanzman/Getty Images
Alex Rodriguez

You can’t fault him for it, but there was an honest and uncomfortable exchange this week involving New York Yankees manager Joe Girardi. It was Tuesday night at Fenway Park, ninth inning, and the Red Sox were ahead 5-2 at the time. Alex Rodriguez was sitting on the bench – again – as his career faded in front of him.

The Fenway faithful let loose on a “WE WANT A-ROD” clap/chant as Girardi sat stoically and did nothing.

After the game when he was asked about the chants, he stood behind his decision to sit Rodriguez, respect for the end of his career be damned. “I don’t know, how am I supposed to react?” Girardi said. “It is part of it. But I have to do what I think is best.”

The No. 9 hitter that night was outfielder Aaron Hicks, hitting a whopping .197 and going up against heat-missile-lobber Craig Kimbrel. Still, Rodriguez wasn’t going to be pinch-hitting. “You are facing a guy throwing 97-98 [mph],” Girardi said, insinuating what many have already figured out: Rodriguez can’t catch up to a true fastball anymore.

“I know he wants to play,” Girardi later added. “That is normal. I have to do what is right for the club and the organization.”

It’s true – Rodriguez has been dreadful this year and has probably done more harm than good to the team’s bottom-line chances of winning. He’s slashing .199/.247/.348 and he’s only appeared in 64 of the Yankees’ 114 games, as is. However, Mark Teixeira, the team’s starting first baseman, is batting .197/.287/.334. Starting third baseman Chase Headley is hitting just .254. Just a few days ago, Girardi even said of Rodriguez’s final week: “If he wants to play in every game, I’ll find a way.” Shuffling Rodriguez into the corner now isn’t about baseball performance, but humiliation.

Rodriguez is quirky and weird and easy to dislike. He probably definitely took performance enhancing drugs multiple times throughout his career. But so did a lot of players (many of whom we all still and will always love). That shouldn’t dilute the fact that Rodriguez is still one of the best, most memorable baseball players any of us have ever seen. As it stands, just three players in the history of the sport have cranked more home runs than him, and if the bat wasn’t enough, he was once a transcendent shortstop, the best at the position since Cal Ripken Jr.

And for that, Rodriguez deserves more respect and appreciation.

Girardi was the Yankees manager in 2014 when Jeter was playing in his final season. The Yankees’ beloved shortstop swooped into city after city to play baseball, yes, but also to be showered with gifts and flowery words and the kind of love Rodriguez has not seen any of this season.

That final year, Jeter slashed .256/.304/.313. By OPS+ (on-base percentage plus slugging percentage, a better isolator of individual performance), Jeter put up a 76 to Rodriguez’s current 61. He was better than Rodriguez, but not by a ton. Still, Jeter would play in 145 games that year and log over 600 at-bats at age 40. Girardi wasn’t making any comments about his inability to catch up to fastballs even if the rest of the country outside of New York was.

Jeter finished his career with love, admiration, 260 home runs and a career batting line of .310/.377/.440. Rodriguez finishes his sitting on the bench, lonely and offended with 696 home runs to his name and a career batting line of .295/.380/.550. There are so very many reasons that Jeter went out the way he did and Rodriguez is exiting differently, but chief among them is that one man is superlikable and one man has never been.

But Girardi didn’t sit Rodriguez because he doesn’t like the man. He did it, he said in so many words, for baseball reasons. Because he wasn’t playing well enough. The problem with that line of logic isn’t just that Rodriguez and Jeter had awfully similar final seasons (but not final treatment) – the problem is that Rodriguez, statistically speaking, deserves more respect than Jeter (and David Ortiz and Bartolo Colon, for that matter).

At 696 career home runs, the idea that the Yankees would politely ask Rodriguez to go away rather than cut him at-bats at the bottom of a bad order is wild. Ten years ago, talk of Rodriguez getting to 700 home runs would have made many salivate and hope. Now it makes them cringe and barf.

There are two other men in MLB this year playing out what should be their final season: Ortiz and Colon. Both have major ties to performance-enhancing drugs over their career, but neither has been ill-received by fans at all. Instead, they’ve gone out to roaring applause. Ortiz has frolicked all over the country this year, taking gifts and giving hugs in a way even Jeter didn’t. It feels like almost every single team has someone whose favorite player/person is Ortiz. They can’t be blamed. The man does seem like a tremendous dude to invite over on a Sunday afternoon.

Colon, for his part, is almost equally beloved. There may be no more aesthetically pleasing athlete in the history of sports. Reminder, because it can’t possibly be said enough: He can do splits and kick his legs above his head like a cheerleader. He’s listed, generously, at 5-foot-11 and 283 pounds.

Again, the reasons that Ortiz and Colon are appreciated and admired in a way Rodriguez isn’t are many. But the main reasons are wrapped around likability and Rodriguez’s lack of it.

This passage from J.R. Moehringer’s 2015 profile of Rodriguez encapsulates what comes out of his mouth better than just about anything:

Take a sentence from Rodriguez, set it between two quotation marks and watch what happens; it curdles like year-old milk. The words become unstable, unusable, weirdly ironic. It’s not a choice, to quote or not to quote, it’s simple science, obeisance to strict natural laws, to the crazy alchemy between his damaged credibility and basic punctuation. Quoting Rodriguez is like dropping a Mento into a Diet Coke. It makes a big whoosh, everyone gets excited, for about three seconds, and then it’s just a mess, and you wonder what’s been accomplished, besides some stickiness, and maybe a permanent stain.

The truth is, though, many may ultimately come to deeply regret disliking and underappreciating A-Rod.

Rodriguez is inarguably one of the 15 best baseball players (as SI.com’s Joe Sheehan noted) and you could argue that’s underrating him. Like Barry Bonds, you don’t get many guys this kind of elite generation-to-generation.

Bonds and Rodriguez are two of the best baseball players to ever do it. One was shunned from the league for nearly a decade, despite putting up a .480 on-base percentage at age 42. The other can’t sniff an at-bat when he’s four home runs shy of 700 and 19 shy of breaking Babe Ruth’s record. Willie Mays last played in 1973. Instead of celebrating Rodriguez, the only man besides Hank Aaron and Bonds to hit more runs over that span than Mays’ 660, we’d rather laugh at Colon and poke Ortiz in the belly.

Rodriguez mostly deserves this lack of love, but we sure will have earned our share of regret, too.