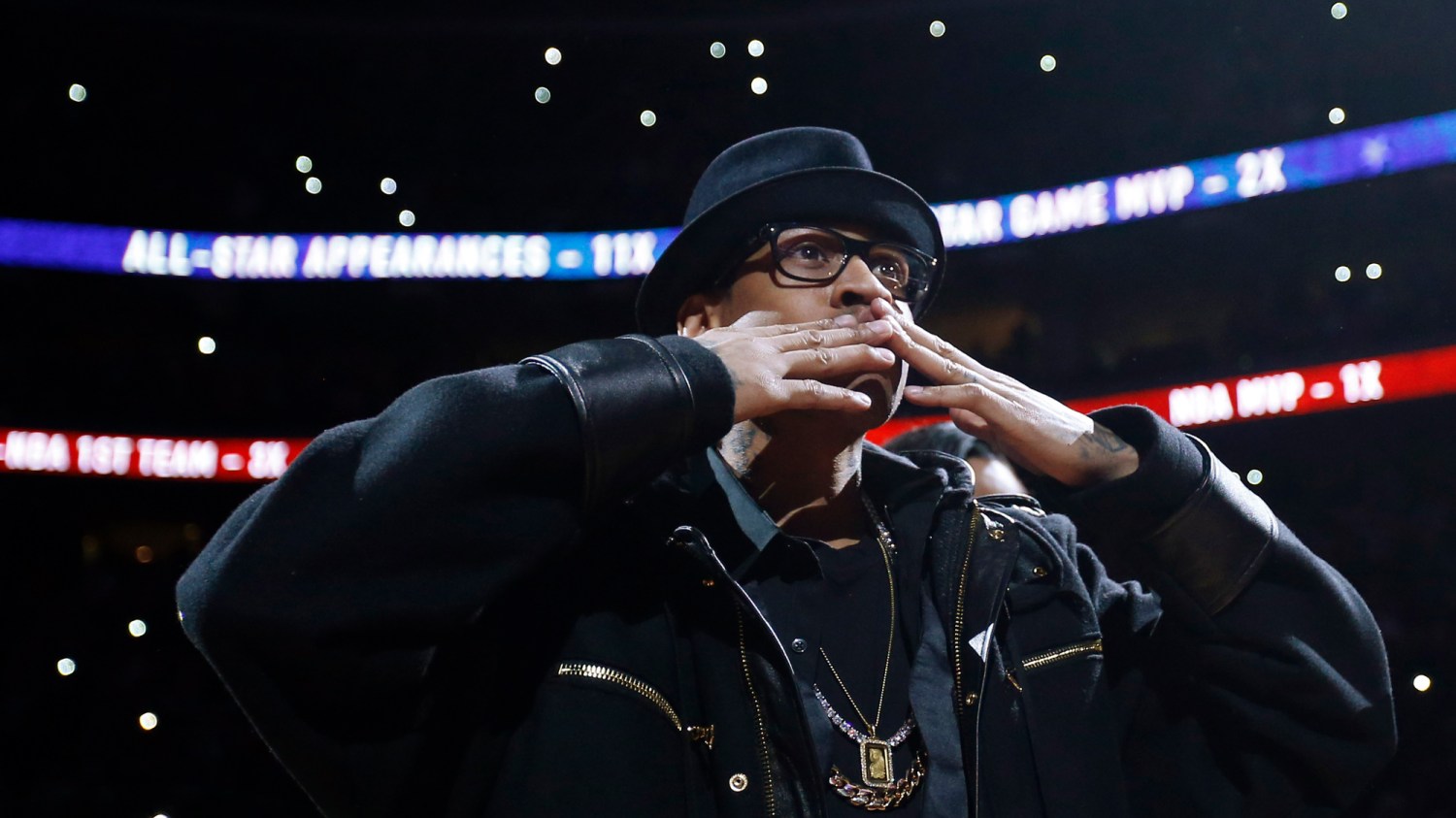 Former Philadelphia 76ers’ Allen Iverson blows a kiss to the crowd during a retirement ceremony at half-time of an NBA basketball game between the Philadelphia 76ers and the Washington Wizards, Saturday, March 1, 2014, in Philadelphia. AP Photo/Matt Slocum

Allen Ezail Iverson lived through hell to make it to basketball heaven.

He arrived in Philadelphia in the summer of 1996 as the No. 1 pick in a draft featuring future Hall of Famers Kobe Bryant, Ray Allen and Steve Nash, perhaps the best, most decorated class of all time. Philadelphia became the epicenter for his exploits for 10 seasons, and his fearless, balls to the wall style of play mimicked the rowdy spirit of the City of Brotherly Love.

Iverson retired with no championships. But — as one of the most beloved, antagonized, critiqued, admired and important athletes in history, he left behind an indelible—and braided—stamp on culture far beyond basketball. Iverson’s entire existence has operated in the far left lane on the highway of life, the fast lane. He was traded in December 2006 from the Sixers to the Denver Nuggets, and after bouncing around from Denver, to Detroit, to Memphis, Tennessee, his world came full circle at the top of the 2009 season.

A.I. sat a press conference in December ’09 announcing his return to the Sixers. He appeared beaten. For a player whose endurance seemed never-ending, Iverson looked exhausted. His skin drooped, his eyes were heavy. By then, the night-in, night-out showcase that had been The Allen Iverson Experience was no longer the must-see attraction who had thrilled fans and provoked critics. In a league he once dominated, A.I. struggled to maintain a roster spot. Life had caught up to him. I watched from a Georgetown bar a man gasping for his last breath of basketball air.

“Last couple of years just been hell, because all I wanna do is play basketball.” — Allen Iverson, 2009

“I would be lying if I said it didn’t bother me, you know, because I think I created … like with the mistakes that I made in my life, you know, I created a picture of me that’s not me,” he said, fighting back tears. “I did a lot of things when I was young that I’m not proud of, but I think those things helped me to be the man that I am now. Last couple of years just been hell, because all I wanna do is play basketball.”

Living in Virginia, you’re indoctrinated in the religion that is Allen Iverson. Especially if you love sports. Especially if you’ve lived in his hometown of Hampton or any of the surrounding cities of Portsmouth, Norfolk, Virginia Beach, Chesapeake, Suffolk or Newport News. Collectively this area is known as “the 757,” and has produced talents such as hometown heroes Michael Vick and Ronald Curry, NFL Hall of Famers Lawrence Taylor and Bruce Smith, soccer player Angela Hucles, track star LaTasha Colander-Clark, and boxer Pernell Whitaker among others.

And especially if you’re a black Virginian, every chapter of Iverson’s life — the good, bad, the downright depressing and everything in between — exists as a kind of rotating museum. A local legend whose exhibits are frequently passed down, and exaggerated, and enshrined through video and framed newspaper clippings in barbershops or pictures on restaurant walls.

If you’re old enough, you remember the theatrics Bubba Chuck (his childhood nickname) provided on the football field and on the basketball court of Bethel High School. You remember the marches demanding his release from the minimum security Newport News City Farm following a 1993 bowling alley brawl. You remember the trial that exposed Hampton’s bitter racial climate — a divide the 757 continues to experience over 20 years later — and nearly fractured the Virginia city for good. You remember, or you heard about his domination at Georgetown alongside Victor Page, led by legendary coach John Thompson. You remember the day he became a ‘hood legend forever, officially etching his name in the Black Barbershop Hall of Fame: when he put Michael Jordan on skates. Twice. And made the shot.

I watched from a Georgetown bar a man gasping for his last breath of basketball air.

You remember Iverson’s short-lived record label, All Business Konducted, and rap career under the stage name “Jewels” — an “embarrassing” decision in hindsight. “It’s about life. Period,” he said in October 2000 about his music’s harsh realities. “I still deal with every aspect of it: the sex, the violence, the drugs. All that. It’s never going to go anywhere. And if it does start to fade away, I still won’t forget it. I know where I come from. I know what I’ve been through.” You remember 2000’s “40 Bars,” the song that nearly gave then-commissioner David Stern a heart attack for its violent, misogynistic and anti-gay lyrics, forcing the league to embargo his debut album Non Fiction.

If you didn’t know about “40 Bars,” you remember the brilliance and magnitude of Iverson and Jadakiss’ Reebok commercials. And you definitely remember scouring Kazaa for the MP3s to put on your latest mix CDs just to hear Jadakiss spit, Bought the ‘hood to the game and they love ’em for the braids and tats. You remember dudes at the park rocking cut-up tube socks on their arms to mimic Iverson’s arm sleeve. If you attended Hampton University, you remember Iverson randomly arriving to the courts behind Harkness Hall getting shots up by himself. And you remember the commotion it caused all around campus.

You remember, too, the urban legend of Iverson at the 2001 All Star Weekend in Washington, D.C. The story is one of those incredible late-night bar fables that has taken on a life of its own, but in it, A.I., back in D.C., is caught up in a whirlwind of parties, public appearances, and drinking. He supposedly never slept the entire weekend, only to win All-Star Game MVP — and drop 15 points in the fourth quarter. The story likely isn’t true. But Iverson was a ghetto Superman, so at least part of you believed the tall tale. And an even smaller part of you still believes it now.

Because you still remember every moment about the 2001 season: a campaign wherein Iverson’s game and counterculture appeal produced his finest work as a pro, earning him league MVP, and the back-to-back, seven-game Eastern Conference shootouts with Vince Carter and the Toronto Raptors and Ray Allen and the Milwaukee Bucks.

And you remember Iverson capping off seven straight points in the overtime of Game 1 of the 2001 Finals versus the Los Angeles Lakers. The entire Staples Center was breathing down his neck, when after a step-back jumper he stepped — stomped, really — over ace defender and future championship Cleveland Cavaliers coach Tyronn Lue — a moment, 15 years later, he’d rather not go on about.

Living in Virginia, you’re indoctrinated in the religion that is Allen Iverson.

If you are a fan of A.I.’s at all, if you are a fan of basketball, you recall, more than he and Lue, Iverson hanging 48 points on the Lakers, ruining their quest for a perfect postseason. “I was extra mad, because I was trying to go 16-0,” Shaquille O’Neal said recently about the close friend he calls “Little Shaq.” O’Neal, Kobe Bryant and the Lakers, of course won the series in a gentleman’s sweep. But the way you think of Iverson’s mindset then, the way you recall everything he represented as a player — the rebellious and fearless tour de force with heart the size of the Liberty Bell — you know. That was his championship.

Less than a year later, in May 2002: the infamous and iconic “practice” rant went down in Philadelphia. The underlying reason for it was the death of his best friend, Rahsaan Langford. Then there was the love-hate relationship between him and coach Larry Brown. And of course, the “thuggish” way the NBA viewed his style, and the dress code which was imposed in 2005. You remember it all — those nomad years that took him from the Rocky Mountains, to Motown, and The Home of the Blues. All fitting stops describing the states of his career at the time.

Crossovers took a backseat to controversies. Those in Bubba Chuck’s inner circle requested prayers. No one knew what the next chapter held. He was a kid from the 757, herringbone chain and all, who fought to become one of the biggest stars in the world. He did it his way. But being unapologetically himself meant the world wouldn’t apologize when it put Iverson in the mixer the way he’d done countless defenders. Watching him fall, once the game no longer required his presence, was crippling. And as basketball receded his life, a tidal wave crashed in: financial shortcomings, brief playing stints overseas, a marriage on life support, accusations of being an unfit parent, rumors of odd jobs. Rumors of battling gambling problems, and alcoholism.

You remember it all, and sometimes see yourself in it all. Self-doubt. Searching for answers at the bottom of a bottle. Am I worth it? Did I put enough work in? Kendrick Lamar’s internal thoughts on 2012’s “Sing About Me” resonate for a reason. If in his private moments, Iverson doubts the work he’s put in, perhaps he should instead make peace with his decisions. If he hasn’t already. His career ended before he said goodbye to the game. Instead, it said goodbye to him.

Watching him fall, once the game no longer required his presence was crippling.

O’Neal’s career ended once Father Time caught up after 19 seasons. Kobe Bryant ended his career with a 60-point onslaught. Tim Duncan ended his in the most Tim Duncan way possible — via a bland, official press release from the San Antonio Spurs. In the final game of Iverson’s career — on a cold February night in Chicago in 2010 — he scored 13 points in his since retired No. 3 Sixers jersey. And he dished three assists in a 32-point blowout loss to the Chicago Bulls. He never played another NBA game.

“I think he’s gonna die with that regret,” said Washington Post reporter Kent Babb, author of 2015’s Not a Game: The Incredible Rise and Unthinkable Fall of Allen Iverson. “I think it’s going to bother him for the rest of his life.”

Iverson, in 2016, appears to be in a good place. Or at least an improving one. By most accounts, he and ex-wife Tawanna are in a much better state, as is Allen The Father. At All-Star Weekend in Toronto in February, I attended the Hall of Fame banquet, where this year’s finalists were announced. Everyone was in suits. Everyone except Iverson. He wore a Reebok T-shirt, jeans, his own signature shoes, a New York Yankees fitted, and gold chains. Classic Iverson. Vintage Bubba Chuck. Always 757.

The room rested comfortably in the palms of his hands. Everyone held on to his every word: black, white, Asian, young, old, NBA legends like Bill Russell and Oscar Robertson to journalists like myself. That’s what Iverson does. He’s a planet with his own gravitational pull.

That gravitational pull has its source in the city that raised him and the state that claims him. You know this. His Hall of Fame speech will be played across the 757: on Granby Street in Norfolk, Jefferson Avenue in Newport News and dorm rooms at Hampton University. It figures to be the topic at every barbershop Saturday morning. In the six years since Iverson’s last NBA moment, and even longer since his last relevant one, it’s been building up to this. Lips will quiver. He’s going to cry loud. He’s going to cry hard. So will you. So will I.