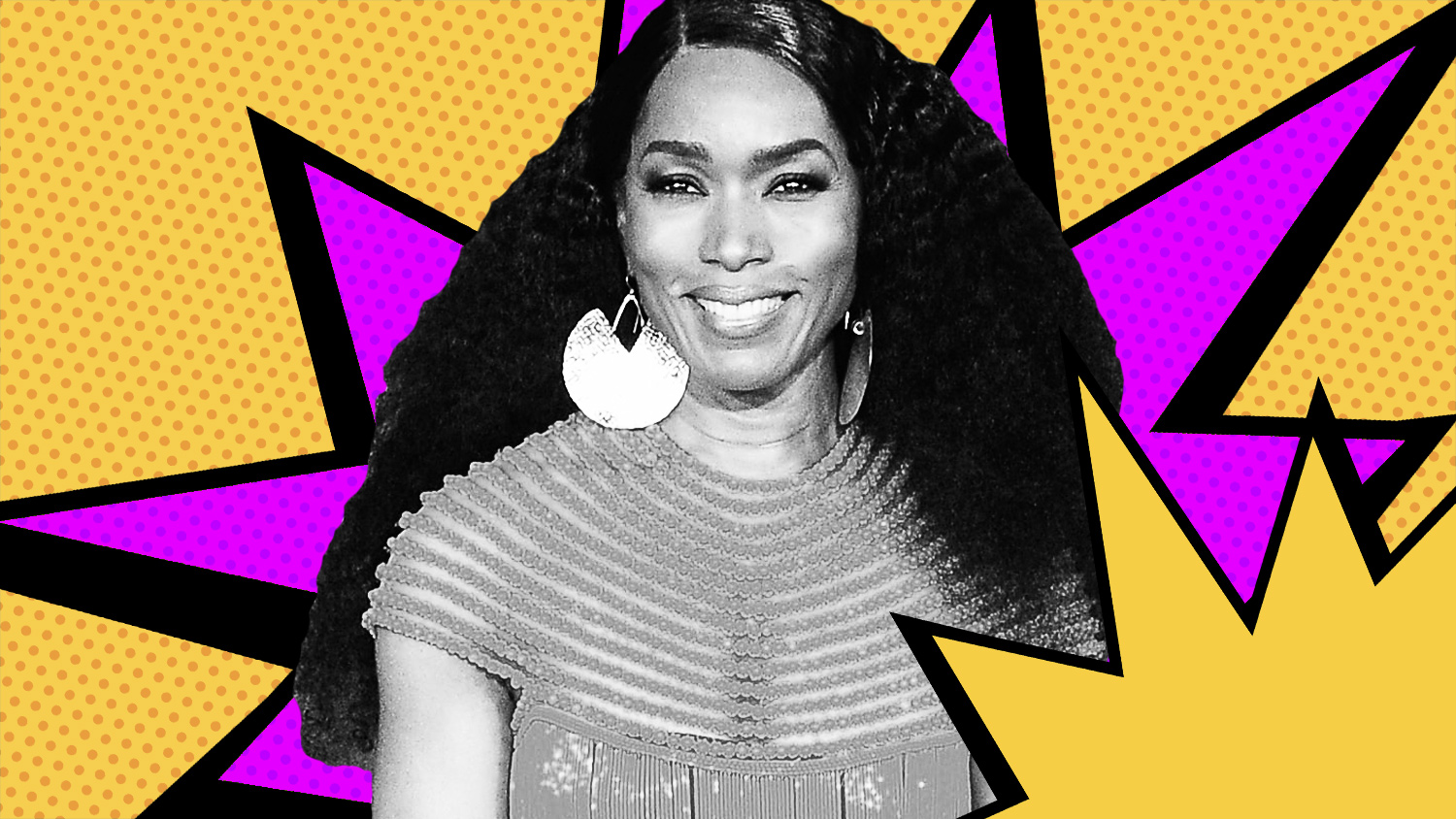 Angela Bassett is a queen in ‘Black Panther’ — and Hollywood

At the Hollywood premiere of Black Panther, when Angela Bassett came out, applause erupted and nearly everyone inside of the Dolby Theatre jumped to their feet as she shimmied across the stage in a sunshine-yellow fringed Naeem Khan jumpsuit.

The queen — our queen — had arrived. Bassett was crowned the grand dame of black Hollywood 25 years ago after turning in a magnificent performance as the legendary Tina Turner in 1993’s What’s Love Got To Do With It, a role for which she rightly earned an Oscar nomination. And quite frankly, she’s nailed every other role we’ve seen her in — The Jacksons: An American Dream, Malcolm X, Panther, Waiting to Exhale, Akeelah and the Bee, Notorious, How Stella Got Her Groove Back, The Rosa Parks Story, Mr. 3000, Close to the Enemy, Chi-Raq — and so many more.

Bassett, at 59, is one of the film community’s most regal actors, and now she portrays Queen Ramonda, the mother of Marvel’s Black Panther. Bassett is also holding it down weekly on Fox’s recently renewed 9-1-1 as Athena Grant, a Los Angeles Police Department patrol sergeant. And she’s got more projects — such as the forthcoming Avengers: Infinity War and Mission Impossible: Fallout — on the way. We talk with one of the best working actors in all of Hollywood.

What’s up with you trying to dominate the small screen and the big screen at the same damn time?!

Just a fortunate accident! And I will take that any year, any day. I knew everyone would talk about Black Panther, so it’s built in. Those fans, they’re loyal and they’ve been waiting forever for this day, for T’Challa, for Black Panther to dominate, to come on the scene. 9-1-1, it’s just a faith wall. I didn’t know what it would be, or how it would connect, but it’s thrilling that those things have dovetailed. It’s nothing that I’ve planned. It’s really just me going about the work, because you don’t know how it’s going to ultimately connect with an audience, so you just have to enjoy the process, be drawn to the script, to the character, to the folks that you’ll be working with. It’s long days and nights. It takes time away from family if you have one. Having kids and a family, you can feel a bit guilty being away. So you just got to love what you do, so that translates to them, that hopefully they see the passion I have for what I do. And hopefully they’ll discover their own passion. That’s how I get through it.

What’s Love Got to Do With It was a big moment, but the role-calls weren’t so immediate after the Oscar nomination. It feels like you have choices now. At this point in your career, what keeps you hungry?

I still enjoy what I do. I still love it. I still appreciate finding, working with, discovering new voices and younger talents. All of that keeps it fresh and vital for me.

What made you want to do another television series?

“The last time I felt that proud was the making of Malcolm X.”

Did you have to transform yourself physically for 9-1-1?

You have to because they give me a police uniform, but they taper it to make it look good! I wasn’t asked to, but personally I felt like the role had the potential to be physically demanding. I don’t want to be that stereotypical cop with the doughnuts!

Both roles are so important in their own right. To see a black woman who is a police officer, who is going through an upheaval in her life while saving the day. And then to have a woman who is the mother of the man who is saving the world — two very important moments happening, and you’re at the center of both of them.

It’s a very powerful image to have a black woman highlighted in a real way, on both large screen and small screen. I recognize that, and always do. It’s a moment where everything comes to bear. My passion, my career, my interests, my history, and the image. I’m always very conscious of … how it comes across. But I don’t know if I [should say] that, because that’s just too righteous. I just want to do good work. I just want to continue working and just continue putting out a good product.

What is the key to your consistency?

I think maybe it’s training? It’s … a gift, and training. And gratitude. Never taking it for granted. Never just showing up thinking: That’s enough. Being willing and wanting to put in whatever work is required, whatever’s necessary.

How do you hope that these roles — individually, and maybe together — fit into the legacy you’ve already established?

I hope that it will just continue to build on it — it’s not the end. That I’m still somewhere in the middle of it! But I hope that we’ll continue that whenever you hear that I’m going to be in something — be part of a project — that it will be one of quality and substance. And maybe if you look, there’s a message of some sort, some positivity in there somewhere. That’s not saying that every character must be sterling and beyond reproach, but there is a message of hope and resilience … there at its core.

How do you process what everyone else sees? When we talk about this regalness that you embody and bring to not only a role, but just in your being?

Your going through all that just put a knot in my stomach! I appreciate it. That’s how I process: I appreciate it, because it is positive. And I understand the way women of color have been viewed, or thought of — our position. So I appreciate it greatly. But I am that girl that grew up in the projects of St. Petersburg, Florida. I’m grounded in where I came from — where we all come from — and what we all possess within us. I just remain humble about it. And appreciative of it. And just keep going, and keep loving. Because I love where I’m from, I love my community, and I think that comes across. I hope that comes across. I’m a real colored girl.

I spent some time on the Black Panther set. It was one of the most authentically black and coolest set visits I’ve ever been on. What was it like for you actually shooting?

It was so fulfilling and uplifting. It was a point of deep, deep pride in what we were doing. The story. How we’re doing it. The professionalism of the creative individuals. From directing the set, to acting, the crew. It was black. And the last time I felt that proud was during the making of Malcolm X. We all had this immense pride as we came to work every day, just waiting to throw down the way we know we can do. And doing it with such style. In Black Panther, we had a big scene on a mountaintop, over the falls, and hundreds of black extras just dressed in the African regalia and garb, and drums just playing while we’re waiting for the big setup. And we can’t help but move and sway and shout. It was so connected to where our ancestors are from. It was amazing. Once those drums started, not knowing each other’s names, it was just such a familiarity. It was powerful.

“I am that girl that grew up in the projects of St. Petersburg, Florida. I’m grounded in where I came from — where we all come from — and what we all possess within us.”

You’ve been part of our collective consciousness since 1991 with Boyz n the Hood. How have you stayed atop the Hollywood wave?

Stay up. Stay up about yourself, about your gift, about what you have to offer, about what you have to bring to the table. Stay positive about that, because the careers, they end and they chill. They’re hot and they’re warm. They cool off a bit, they stay warm. And they can always break and be hot again. But stay ready, stay engaged and stay enthused. Hold on to that, because a lot about life can test you.

This is a milestone year for you. What would make this a successful 2018?

The Black Panther busting expectations, surpassing expectations. Mission: Impossible coming out, doing well. And 9-1-1 being successful. I’m hoping that wave continues to swell. Some directing in there, so I’m not too busy acting. A little bit of that, and just always back to the family, you know? Watching these kids grow up and thrive.

You took your children to their first premiere — and it was Black Panther. Why did you pick that project for them to see?

Well, you know, it’s — the black kids and the black mama. It’s a beautiful world. It’s … so powerful. It’s … such an event. There’s such enthusiasm about this story. Our story and our image. And not as supporting players. The hero. Heroic. I wanted them to see that. I’m always trying to put them in situations where they can be proud of everyone, but especially proud of themselves.