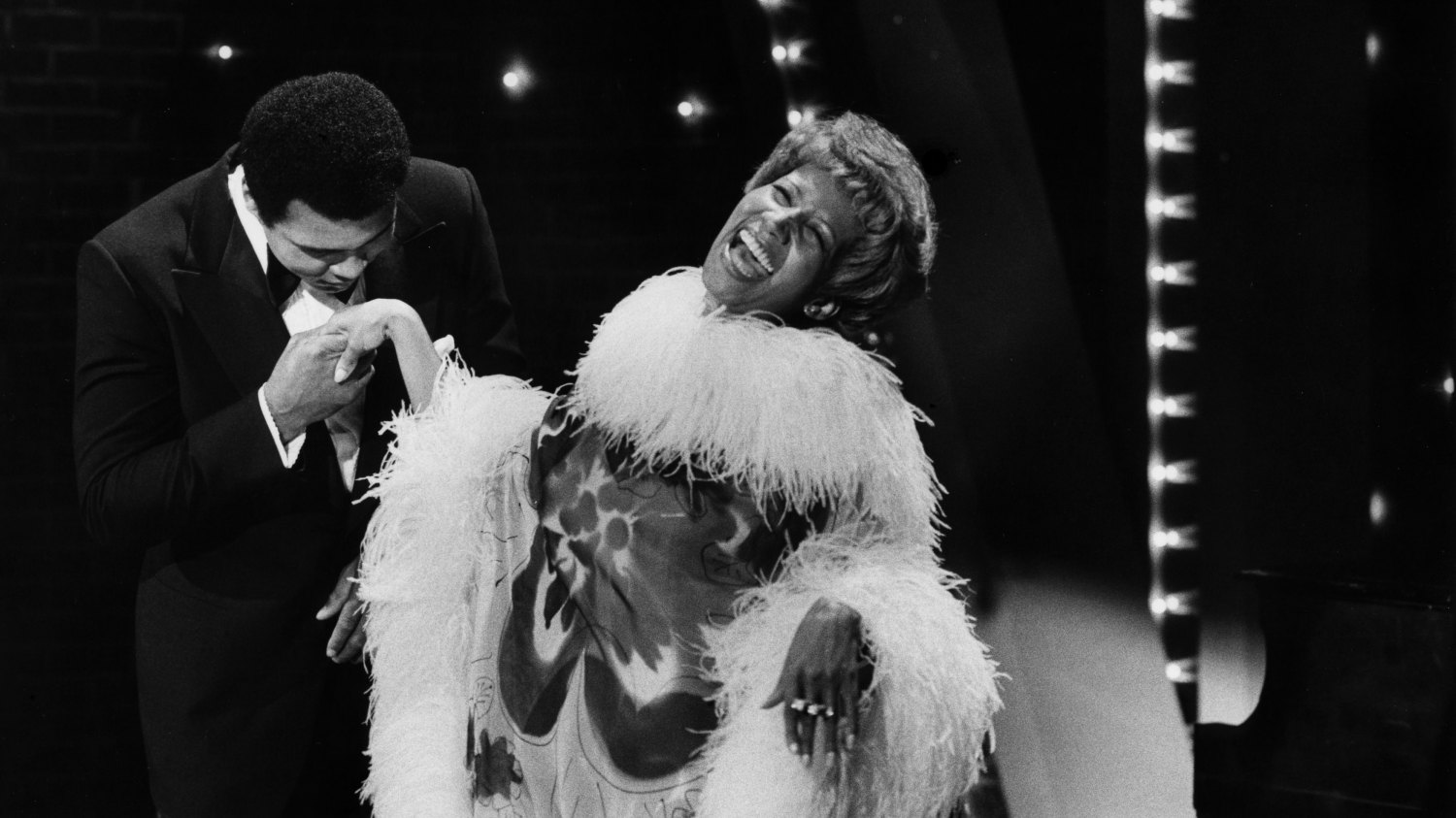 From WrestleMania to the Olympics to Bo Jackson, the Queen of Soul often sang, and more — for the love of the game

When the death of Aretha Franklin was announced to the world, the somber news was met with the kind of reverence usually reserved for political dignitaries or royalty. And what else would you expect for the Queen of Soul, the most celebrated voice of not just her generation but perhaps of all time? There are the Rock & Roll Hall of Famer’s 20 No. 1 singles, including genre-defining standards such as “Respect,” “(You Make Me Feel Like) A Natural Woman,” “Chain of Fools,” “Rock Steady,” and “Freeway of Love.” And there are endless accolades, including the Presidential Medal of Freedom and 18 Grammys. Whether bringing audiences to tears in 1998 when she stepped in at the last minute for an ailing Luciano Pavarotti, or performing at the inaugurations of President Bill Clinton and President Barack Obama, or singing for Queen Elizabeth as well as Pope Francis during his 2015 visit to Philadelphia, Franklin’s greatness knows no bounds. And so it is no surprise that Franklin is beloved in the sports community as well. Here is a list of moments when Franklin knocked it out the proverbial park, cementing her peerless legacy on football fields and beyond. Game, set, Queen.

You don’t tell Picasso how to paint. Nor Kendrick Lamar how to rhyme. You don’t tell LeBron James how to score in the post, or Shonda Rhimes how to write binge-worthy television. And you certainly don’t tell Beyoncé how to be Beyoncé. So when the NFL asked Franklin to perform “The Star-Spangled Banner” at Ford Field before the 2016 Thanksgiving Day game between her beloved Detroit Lions and the Minnesota Vikings, she did what only the Queen of Soul can do. Franklin unleashed a bold five-minute rendition of the national anthem while playing a grand piano, wearing a gray fur coat and a knit Lions hat.

Thunderous applause ensued, but the headline-making statement wasn’t without controversy. The national treasure stretched out the “That our flag was still there” line for 12 seconds (!!!), prompting some on social media to label her performance as self-indulgent. However, there was plenty of love for Franklin’s unique take on America’s patriotic battle hymn. “Aretha Franklin is pretty far up at the top of the list of folks who can take however long they want with the national anthem,” said ESPN’s NFL insider. Amen.

“Take Me Out To The Ballgame” Never Sounded Like This

Back in 1908 when Jack Norworth and Albert Von Tilzer wrote “Take Me Out to the Ballgame,” the Tin Pan Alley creatives could have never imagined their vaudeville favorite being sung with such unbridled, let-me-show-you joy. Watching the majestic Franklin, in a baseball cap and MLB bomber, cut up in this lighthearted Detroit Tigers promo is pretty awesome. Who knew Franklin could pitch, bat cleanup and catch the Holy Ghost as she served up the seventh-inning-stretch staple? And yes, that’s Tigers great Cecil Fielder and teammates joining in on the high jinks.

Who knew Franklin could pitch, bat cleanup and catch the Holy Ghost as she served up the seventh-inning-stretch staple?

In August 2013, Franklin was honored by the MLB Beacon Awards as part of the annual Civil Rights Game between the Chicago White Sox and the Texas Rangers. She was joined by one of the most gifted athletes ever, Bo Jackson.

The Beacon Awards were established to celebrate figures who fought on and off the field for equal rights for all Americans. No problem. Franklin had long been deeply connected to the civil rights struggle and was a family friend of Martin Luther King Jr. and Coretta Scott King. As for Jackson, the two-sport superstar who was born during the last remnants of 1962 Alabama Jim Crow, he frequently used his platforms to support at-risk youths of color. As for the game? The White Sox, the team with which Jackson enjoyed a brief career resurgence before retiring because of a football-related hip injury, won the game in a dramatic walk-off.

When the Little Caesars Arena opened on Sept. 5, 2017, it was hailed as the crown jewel of downtown Detroit’s much-reported economic revitalization. So it was only fitting that when several towering “Spirits Murals” were commissioned to be featured on the exterior of the home building of the Detroit Pistons and Red Wings, Franklin was included. Other Motown icons celebrated in the 650,000-square-foot sports and entertainment complex include heavyweight boxing immortal Joe Louis, Pistons Hall of Famer Isiah Thomas, Red Wings giant Gordie Howe and hip-hop superstar Eminem.

The Queen Teams Up With The Greatest

For decades, Aretha Franklin and Muhammad Ali shared a friendship. After he officially made his comeback to the ring in 1971, Franklin was there to support Ali during most of his legendary string of fights as he eventually regained the belt against George Foreman at the Rumble in the Jungle. The two larger-than-life figures even appeared onstage together on The Champ’s Muhammad Ali Variety Show in 1975 and collaborated on various charities and benefit gigs. Years later, when Ali died after a long battle with Parkinson’s disease, Franklin was one of many luminaries to pay tribute. “What everyone saw was exactly who he was at the time that you saw it,” she said of her dear friend. “Ali was certainly not one to be quiet about his feelings. … He was a very strong example straight across the board in terms of what he felt were human rights and civil rights. That’s just who he was.”

Roundly viewed as the greatest installment of WrestleMania, March 29, 1987’s WrestleMania III was an embarrassment of riches. First of all, there was the historic matchup between Hulk Hogan (years before a tape recording surfaced of Hogan making anti-black racist comments) and Andre the Giant, the biggest wrestling star to ever set foot in a wrestling ring at the time.

There was also the six-months-in-the-making epic war between Randy “Macho Man” Savage and Ricky “The Dragon” Steamboat, as well as crowd-pleasing showings from the Junkyard Dog, Rowdy Roddy Piper, Jake “The Snake” Roberts, the Iron Sheik and Nikolai Volkoff. But the record crowd of 93,173 fans at Michigan’s Pontiac Silverdome was also treated to Franklin’s stirring rendition of “America the Beautiful.” Rabid fans gave the all-world vocalist a standing ovation. Twenty years later, she returned to the WWE on April 1, 2007, for WrestleMania 23, fittingly at Detroit’s Ford Field, reprising her stellar performance.

It was time to light Detroit’s cauldron with the Olympic torch and really there was only one person worthy of the symbolic task: Franklin. Not only did Lady Soul complete her leg of the torch relay on Jan. 6, 2002, she was also commissioned to record the official theme song “Carry the Flame” for the run-up to the Winter Olympics. Not bad for a preacher’s daughter from the D. Not bad at all.