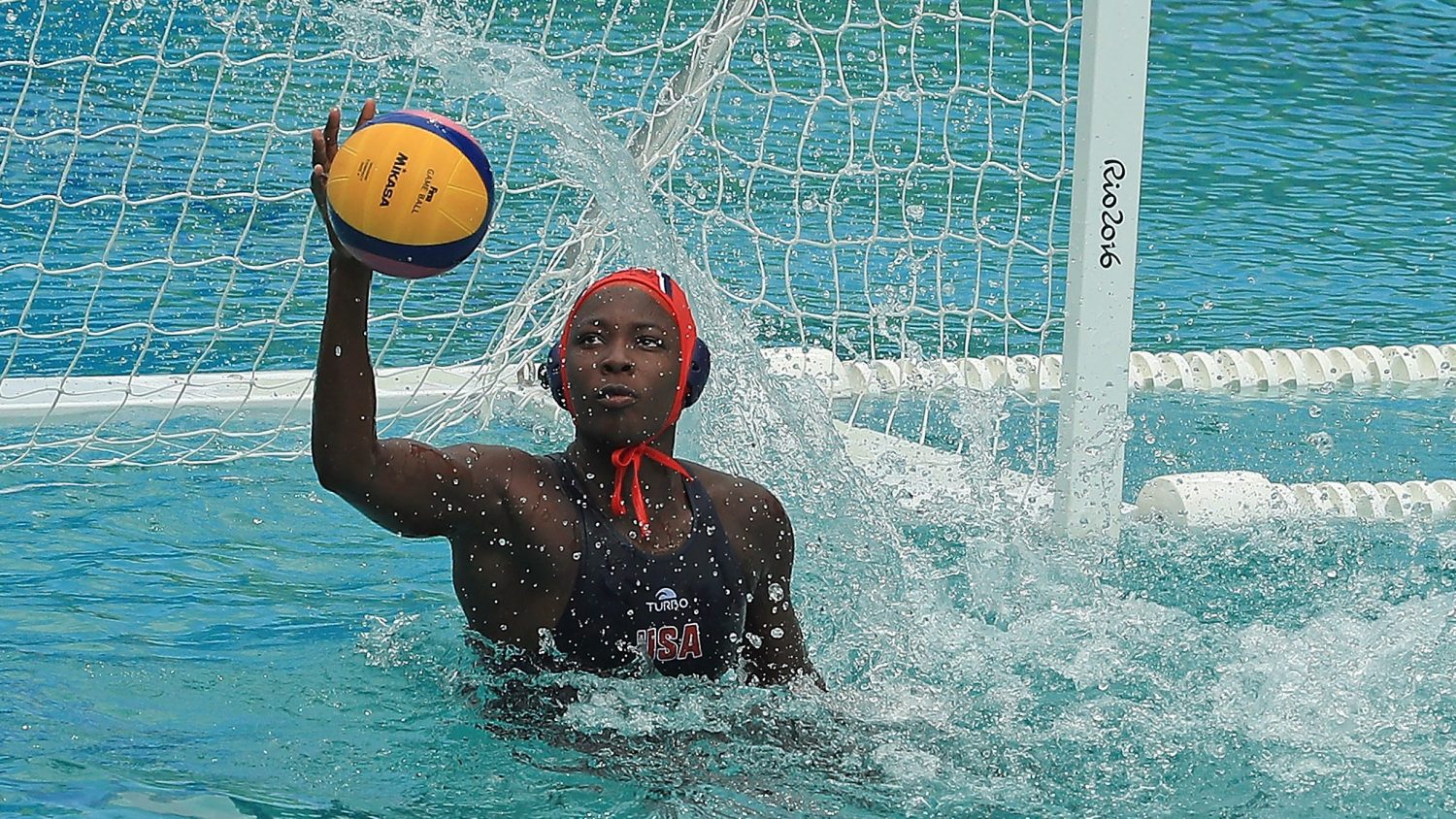 Ashleigh Johnson #13 of United States makes a save during a Womens Preliminary match against China on Day 6 of the 2016 Rio Olympics at Maria Lenk Aquatics Centre on August 11, 2016 in Rio de Janeiro, Brazil. Mike Ehrmann/Getty Images
Rio Olympics 2016

The beautiful saves of Ashleigh Johnson

To hear her tell it, Ashleigh Johnson — the newly-minted Olympic gold medalist in women’s water polo — isn’t really into sports. None besides her own, that is.

No biking, no hooping or skiing, which she’s never even tried. Hiking is definitely off the “to-do” list after she got caught in a snowstorm with her water polo teammates during a two-mile excursion on the outskirts of Colorado Springs, Colorado, before the 2016 Summer Games in Rio de Janeiro.

“We did a lot of hiking in this Olympic year as a team to reinforce the metaphor of ‘getting to the peak,’ but I figured out that I did not enjoy it at all,” Johnson admitted with a laugh. “I’m actually really competitive, so it’s best to just concentrate on water polo — and writing my senior thesis, which I’m kind of dreading and looking forward to at the same time.”

Johnson may not be a household name like Serena Williams or Simone Biles — not yet, at least. But the bubbly Miami-area native is as talented, determined and insanely athletic as Williams and Biles, two other Olympic champions who excel in tennis and gymnastics, sports that are more well-known, thus guaranteeing better sponsorship deals and wider mainstream success.

“It’s really cool that people are reaching out to me to ask where there’s an opportunity for their kids to try the sport.”

But Johnson, who stands an impressive 6-feet-1, is every inch the burgeoning icon who competes at an elite international level in a sport that has a cultlike following. Like Simone Manuel, the U.S. freestyle swimming sprinter who also took home gold (and silver) at the 2016 games, Johnson has helped open a space for African-American women, who have historically been absent in swimming events.

“Playing on the stage I was able to play on and being able to be seen by other African-American women has been just great thing for us in this sport,” she said. “I’m hearing that so many people are putting their sons and daughters into swim classes and finding local water polo teams.”

“I think it’s really cool that people are reaching out to me to ask where there’s an opportunity for their kids to try the sport,” Johnson said. “Internationally, water polo teams are covered pretty well. You can watch games on TV and I feel like it’s advertised pretty well. It’s more hidden here. When you talk to girls from other countries, they say they’ve seen their own teams play; it’s such a big sport in the rest of the world.”

Post-Rio, she has willingly taken on the mantle of de facto ambassador for water polo, a sport that is one of the most physically demanding in the world. Above water, players can throw the ball using only one hand at a time. But the most aggressive action is underwater, where players are kicking, clawing and punching opponents while treading water in the deep end of the pool.

No wonder the demands of training for and competing in the Olympics left her spent. After the closing ceremony, Johnson retreated to her family home in Florida and did a lot of nothing. “I asked my mom to cook for me because she makes my favorite foods whenever I go home, and I chilled out,” she admitted. “I was on my own schedule, which I hadn’t been in a long time, so I slept in, went for my own workouts and played with my dog.

“I also did some kickboxing with my sister and I got in the pool and just like, floated on a tube.”

Now that Johnson is back in her college dorm at Princeton, her rising profile may be one of the things that pushes the sport into a brighter spotlight. It’s also made her an approachable star on the beautiful campus of the Ivy League college, where she regularly gets high fives from students as she walks to and from class.

“My sister [Chelsea, a Princeton sophomore and a center on the university water polo team] says she gets recognized a lot on campus because everyone thinks she’s me,” Johnson said with a laugh. “We look a lot alike, so she takes it all in stride.”

“I just want to finish up at school and then decide if I want to go into the working world or continue to play water polo.”

Her plans are up in the air after graduation. “I don’t have a plan right now, I just want to finish up at school and then decide if I want to go into the working world or continue to play water polo. If I want to pursue psychology, I’ll definitely continue in school and pursue a degree in higher education.”

One positive thing about being less visible to the TV viewing public was being able to perform in the pool without facing criticism for her appearance like Gabby Douglas was. Johnson admits feeling kinship with Douglas — especially around the politics and practicalities of being a black female athlete.

“Just the amount of work Gabby puts into being an elite athlete — I think that people will be more accepting in the future about her struggles with styling it, but I hope it helped to have an open dialogue about how much time and effort it takes to train at that level,” Johnson said. “She spends 10 hours a day in the gym. You can hear the numbers, but you never really know until you’re actually in that situation.”

Johnson acknowledged the unique challenges that black women have as elite athletes. “The acceptance of different hair types has made a lot of difference. I hope that it continues to progress. I hope people come to understand just how much work and effort it takes to maintain your hair when you’re training at that level. Just keeping your hair healthy when you wash it so much after training for so many hours a day — it’s just such a struggle.”

Hair struggles aside, Johnson doesn’t fret much about the vagaries of fashion “For this past year, I haven’t really thought about being stylish at all! I like to dress comfortable and I don’t try to push anything fashionwise. My style is pretty laid-back. I usually wear black and white if I’m going out, but I like bright colors, probably because I’m from Miami.

“Coming to Princeton, I’ve just got jackets, lots of long-sleeved shirts and lots of hats and gloves!” Makeup, she admits, is also not a priority. “I don’t really know how to do it — but I’d really like to learn. It’d be a good skill to know how to do for events — I’m actually getting a lot of invitations for stuff now, which is really fun.”