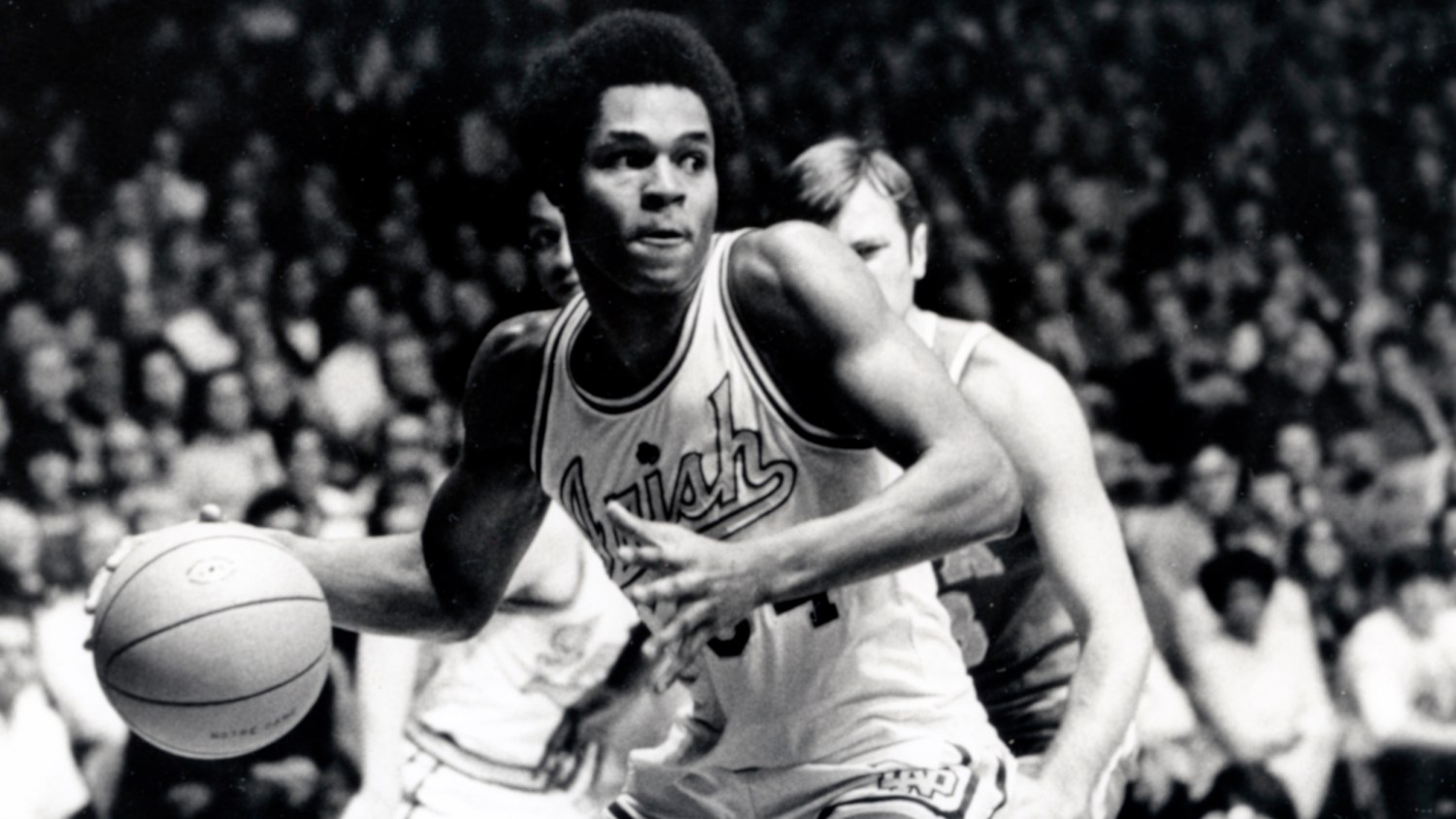 The Notre Dame All-American averaged 41.3 points a game and has the all-time best game at 61 points

It’s two hours before game time, and I am standing with Jim Chones on the edge of The Q basketball court in Cleveland watching the end-of-the-bench players get in some shooting before the greats whose names you know come out. Chones is a radio broadcaster for the NBA champion Cleveland Cavaliers these days, and was a basketball great in his own right: First-team NCAA All-American at Marquette University in 1972, then 10 years playing in the ABA and NBA as a center/forward. Five years for the Cavs and a member of the Los Angeles Lakers championship team in 1980.

We are talking old NCAA tournament basketball when Austin Carr walks by. Carr is a longtime TV analyst for the Cavs, and he is a man with a great basketball pedigree as well. He was a first-team All-American while playing for University of Notre Dame in 1971, and the NBA’s top draft pick by the newly created expansion Cavs that year. The shooting guard had a good 11 years in the NBA, and even though he had five bad knee and foot injuries in his career, he averaged 15 points a game and scored more than 10,000 points in his NBA career.

Chones points at Carr. “I played against him and there was no one quite like him in college,” Chones says. “He was disciplined and could drive and pivot and shoot and break down any defense. He was so smart, and no one could guard him. People always talk about [Bill] Walton and [Bill] Russell and Kareem Abdul-Jabbar and Oscar Robertson as the great college players, but Austin Carr belongs in that group, too. Those of us who played against him know that.”

“All you have to do is check his scoring records,” Chones says. “I don’t think they’ll ever be broken.”

Chones is right about what Carr did almost 50 years ago, as he holds both game and all-time NCAA tournament scoring records for March Madness that are so far out there that they probably will never be broken. And as the NCAA men’s basketball tournament begins this week — and obsessive contemplation over bracketology and college affiliation stops millions of workers in America over the next three weeks — it’s odd that few of these crazed fans know who was the greatest scorer in tournament history.

Part of the problem is that Carr didn’t play in the Atlantic Coast Conference, or the Big Ten or the Pac 12. Notre Dame was independent back then, and the school didn’t make it into the Final Four in his three years in the tournament. And Carr set his records at a time when the term “March Madness” didn’t even exist (outside of Illinois high school basketball) and most NCAA games weren’t nationally televised.

First the numbers: Carr played for Notre Dame in the tournament from 1969-1971 in seven games. He averaged 41.3 points over those seven games, with Princeton University’s Bill Bradley second all-time with 33.7 points a game in nine games and Robertson of the University of Cincinnati third with 32.4 points in 10 games.. Broken down for individual tournaments, Carr has the two highest scoring averages in history: 52.7 points per game in the 1970 tourney, and 41.7 points per game in 1971.

Look further, and Carr’s tourney records get even more impressive. He holds three of the top five scoring games in NCAA tournament – 61 (against Ohio University), 52 (University of Kentucky) and 52 (Texas Christian University). Carr also has five of the top 12 scoring games, and no other player appears more than once in that top 12 list, which includes Bradley, Robertson, David Robinson and Elvin Hayes.

Carr is somewhat puzzled by his name being left out of the discussion these days of “best ever” for March Madness, but also acknowledges that time and how the game has changed influence memory.

“It is different now, because the coaches spread everything around and a lot of the players are camped out at the 3-point line,” Carr says. “They don’t have many players in college now who can score from different spots on the court on a regular basis. I had to do that; I had to be able to play inside and outside, run the floor, and deal with getting double-teamed in most of these games.”

But then he laughs. “A college kid last year brought up that the 61 points I scored against Ohio University might be a little tainted because I took 44 shots,” he says. “I told him I made 25 of those 44, and that he should do the math on that. Someone watched the tape and figured out I probably would have scored 70 or more points in that game had there been a 3-point shot in college basketball back then.”

It is important to listen to two voices from back then as to how great Carr was in college. During his senior year, Carr poured in 50 points in a 99-92 victory over Kentucky in Louisville. He was 6-feet-4 and 200 pounds, and coaches found guarding a guy with his size and speed and shooting ability hard to match up with. “We put five different players on Carr tonight, and he still scored 50 points,” Kentucky’s legendary coach Adolph Rupp said. “It was an amazing performance.”

That same year, Carr scored 46 points to lead the Fighting Irish to an 89-82 win over No. 1-ranked UCLA, and he scored 15 of Notre Dame’s last 17 points. It was the most points ever scored by an individual against a John Wooden-coached team. “There is no one to compare with him man-to-man,” Wooden said of Carr’s performance.

Carr still remembers those big games and those coaches. He grew up in Washington, D.C., and he and his parents agreed playing basketball was more about getting a college education than anything else. He chose Notre Dame because he came from a Catholic family and went to Mackin Catholic High School. After his junior year in college in 1970, there was some talk that he should leave school early for the American Basketball Association.

“Never even really gave that any consideration,“ Carr says. “Playing basketball gave me the opportunity to graduate from Notre Dame with a degree in economics. In the household I grew up in, getting a college degree was more important than basketball. It’s how I was raised and that way of thinking is still important to me and my family.”

Kellogg: His records are among greatest ever

CBS basketball analyst Clark Kellogg grew up in East Cleveland, Ohio, and was a big fan of the Notre Dame great when he arrived in Cleveland in 1971 as the first draft choice for the new NBA expansion Cleveland Cavaliers. “I was in awe of him, and I got to meet him in the eighth grade [1974] when I went to his overnight basketball camp in Cleveland,” Kellogg said. “He emphasized hard work the whole time and that stuck with me.”

Kellogg, an Ohio State University grad and who played for the Indiana Pacers for five years, is also a little perplexed as to why Carr’s NCAA scoring records aren’t at least mentioned a bit more these days. “There are lots of reasons, probably,” he said. “Those injuries he had in the NBA didn’t allow him to be as great as he was in the NCAA, and he wasn’t on one of those big NCAA teams like Kentucky or Indiana or UCLA or Duke. And it is obvious that the younger basketball fans might think Carr played in ancient times.”

“But I’ll say this much,” Kellogg continued. “Joe DiMaggio had his 56-game hitting streak and Wilt Chamberlain scored 100 points in a game and Ted Williams was the last to hit .400 and just about every sports fan knows about those records. I’m not saying Austin Carr’s NCAA tournament numbers are in the exact same category as those, but they are pretty close. And what people don’t realize is that the teams Carr played against knew he was the main guy on Notre Dame they had to stop – and they doubled- and triple-teamed him to do so – and they still couldn’t stop him.”

Part of the reason the memory of Carr’s March Madness greatness has dimmed in some regard is that Abdul-Jabbar came right before him and Walton right afterward. The Indiana Hoosiers under Bob Knight went undefeated in 1976. The NCAA tournament was only 25 teams when Carr played in the early 1970s, and didn’t blow up in popularity and big TV ratings until Larry Bird and Magic Johnson played in their famed NCAA Final game in 1979.

For the most part, the game was also very different back then, with coaches relying upon fewer players on each team to carry the load. “When I played, the coach expected us to run the offense more and figure out what we needed to do while we were on the court,” Carr said. “I also needed to be able to drive the lane, post up, run the fast break and shoot the long jumper to stretch the defense. We had to do everything back then, and play more minutes because the team offense was based on one or two scoring guys and not five. A lot of the college players now just stand behind the 3-point line and wait for the ball.”

Len Elmore, an NCAA basketball analyst for ESPN and CBS, said that “those of us who played against him and so many other great players from that era know that those points Austin Carr scored back then were nothing short of amazing.” Elmore graduated from University of Maryland in 1974, and played for 10 years in the ABA and NBA until retiring from the New York Knicks in 1984. He also received a law degree from Harvard University and once served as an assistant district attorney in Brooklyn, New York.

“Part of the reason Austin Carr’s NCAA records aren’t remembered is that he played before 1979, and many people who follow NCAA basketball of a certain age don’t think college basketball existed before 1979,” Elmore said. “Also, Notre Dame didn’t go to the Final Four while he played there, and some people don’t think a player is great in college until they cross that threshold.”

Carr understands how all this works and is not the least bit pissed by what many perceive as a history snub. “I’ve never been one to get enamored with self-promotion,” he said.

“But with how the NCAA tournament is run and promoted now, it is easy to see that there are too many people with too many different agendas involved,” Carr concluded. “They get confused with thinking that somehow everything is part of a promotion, and something that happened a long time ago can’t get more people to watch games or to sell more products so there is no reason to mention it.

“But again, it’s not something I think much about that much anymore,” he said. “I don’t think anyone will ever score those kind of numbers, for many reasons. I’ll be glad to help promote the games if they want me to. But I’m not one to push for some honoring of my scoring records, because I’m not that type of guy.”

Daniel McGraw is a freelance writer in Lakewood Ohio and is a contributor to Politico, Pacific Standard, The Guardian, Next City and others.