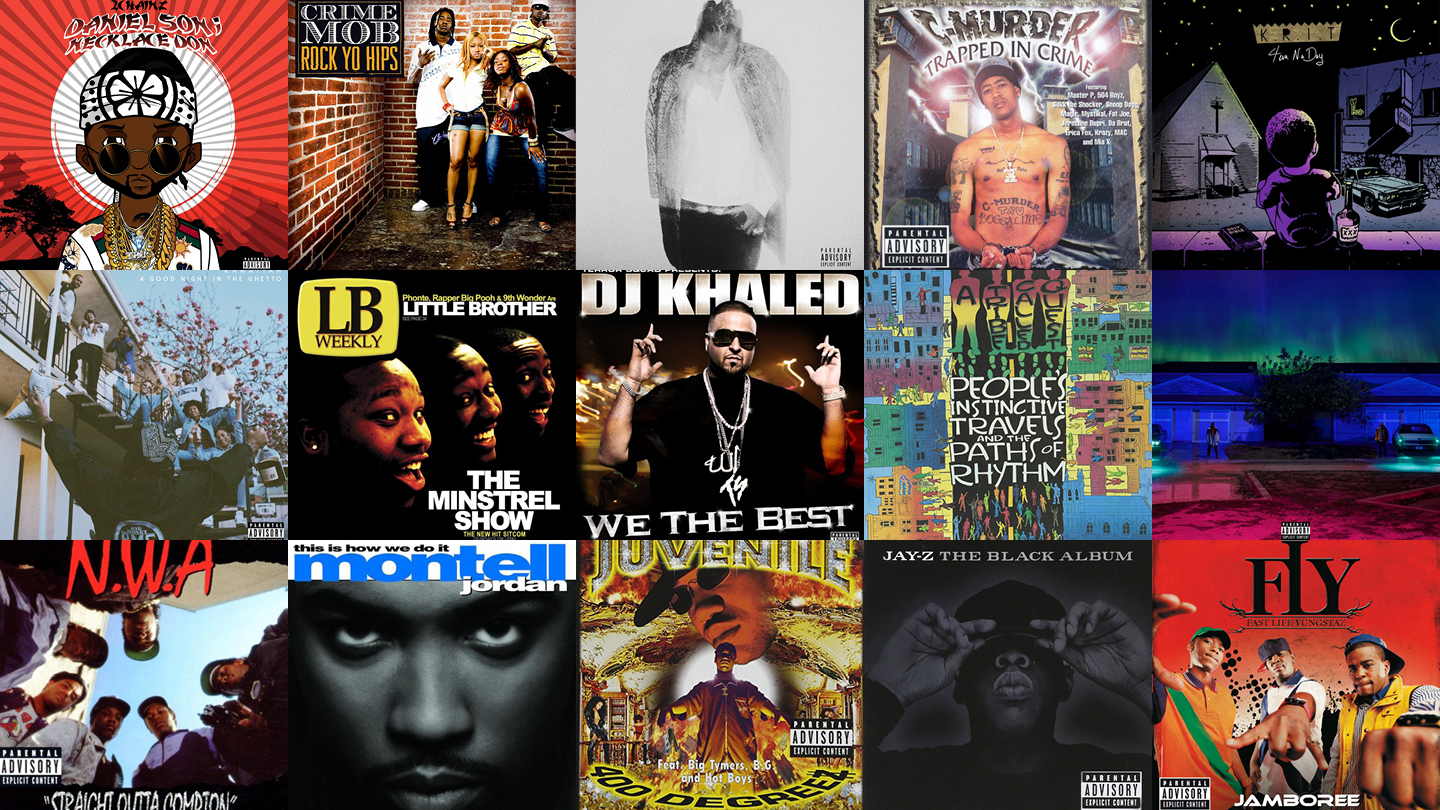 Face it, summer’s over: 22 songs to get your mind right for the new academic year

omeone please start a petition to get rid of the month of August. The month is useless. It’s just training camp, then injuries at training camp, then crappy NFL preseason football because of training camp and finally, worst of all, back to campus. We get that it’s a joyous time for parents, but please don’t make it too obvious? We can clearly see you pumping your fist in the bathroom and doing little happy dances everywhere. But for anybody who’s going to be sitting in a classroom anytime soon, this playlist is for you. Featuring songs from A Tribe Called Quest to 2 Chainz to Buju Banton to MF DOOM, this playlist will hopefully be enough to get you through to Christmas break.

West Coast hip-hop was never the same after a hip-hop group from Los Angeles popped up on the scene in 1986. “Express Yourself’” is self-explanatory and still resonates today.

First things first: RIP Phife. A Tribe Called Quest’s 1990 debut, People’s Instinctive Travels and the Paths of Rhythm is home to some of the group’s most well-known songs, namely “Bonita Applebum,” “I Left My Wallet in El Segundo” and “Can I Kick It?” While you can’t go wrong with any of those songs, “Push It Along” stands out because of its succinct yet metaphoric chorus, which can be interpreted two ways. No one likes sitting in a classroom for what can seem like hours on end — but just keep pushing. Like Jarobi says on the outro, In my way there’s boulder, but you know what I had to do? I had to push it along. Life’s all about being proactive rather than reactive. Don’t be surprised by your grades at the end of the semester. Ask your professor how you’re doing and you’ll be surprised by how open he or she is.

You’re going back to school and trying to figure out what it is that you want to do or be in life. This was the mindset of 18-year-old hip-hop artist Nasir Jones in Queens, New York, while recording his debut album, Illmatic. Considered one of the greatest hip-hop albums of all time, there’s no secret about the message of this track — if you put your heart and mind to it, the world can truly be yours.

As one of the all-time house party staples, Friday nights have not been the same since Montell Jordan dropped this track in 1995. Who else could have enhanced a sample of Slick Rick’s 1989 “Children’s Story” and turned it into a club banger? Keep this in your playlist for when you’re ready to jam to a golden era tune.

The standout track from Buju Banton’s 1995 dancehall classic ‘Til Shiloh serves as a reminder to always be confident in your abilities. There’s a fine line between confidence and arrogance. So tread carefully, but don’t let the subtle intricacies of patois keep you from claiming Me all ah walk like a champion/ Talk like a champion. When college gets extremely difficult, just remember who you are.

Nine times out of 10, your favorite black Greek-letter organizations on campus will have this track blaring from speakers as they do their favorite strolls on your campus’s yard, or at a house party. This track is truly a “ride or die” anthem of brotherhood/sisterhood … and what better way to be down for the culture? Save this track for when you’re ready to up the fellowship ante with your peoples.

Juvenile single-handedly made an era’s anthem with one simple battle cry: Cash Money Records takin’ over for the ’99 and the 2000. Never will this song get old. And once you hear the beat drop by producer Mannie Fresh at any function, you better grab a hold of something or get ready to get hype — Cash Money Records is taking over the spot for the next four minutes and 25 seconds.

Need a motivational track to get your semester going? Why not bump to one of HOV’s greatest hits? It influenced President Barack Obama to dust off his shoulder during a Democratic primary speech. After all, you gotta dust your past off and start the academic year fresh.

There are usually two things that happen when Crime Mob pops off at either a house party or a club: The crowd goes crazy and bops to the ATL classic or a dance riot breaks out on the floor. Either way, this Dirty South gospel was made for getting crunk. And, for the record, no, “Juju On That Beat” could NEVER compare to the original.

When will MF DOOM get the credit he deserves? He makes an entire song about how we should carefully select friends while sampling two songs (“Friends and Strangers” by Ronnie Laws and “Friends” by Whodini) about friendship! That level of depth is borderline nonexistent in today’s hip-hop. Don’t let his use of skits prevent you from missing out on DOOM’s exceptional lyricism. Still, what DOOM is saying cannot be overstated: Choose your friends wisely. As DOOM eloquently put it, Jealousy the number one killer among black folk. Not everybody deserves to be your friend, and when somebody shows you who they are, believe them.

It’s mind-boggling to think that DJ Khaled is known by many as that guy from Snapchat with philosophical advice. Well, congratulations, you played yourself. Six years before the release of the photo-sharing app, Khaled curated arguably the greatest song of his career in “We Takin’ Over.” As a senior, this song will forever hold a special place in my heart (and not because Wayne’s verse was the first I ever committed to memory). This epitomizes the difficult journey so many seniors have taken — from the eagerness of freshman year to the doldrums of sophomore year to the nostalgic anxiety of senior year. The world better watch out for us ’cause we takin’ over (one city at a time).

In case you didn’t know the great trio of Phonte, Big Pooh and DJ/producer 9th Wonder out of Durham, North Carolina, once known as “Little Brother,” the group was one of the most highly acclaimed underground hip-hop groups of their time. The title of the song about says it all: Have dreams, while keeping in mind that dreams alone don’t keep the lights on.

No matter what school you attend, but especially at a historically black college, this track is almost mandatory to know line by line. Whether you hear it in the club, in the gymnasium or your school’s stadium, you better grab your nearest friends and be ready to surf with swag.

Want a subwoofing, bass booming, Dirty South track to start the first day of school? Well, this track, made by Mississippi rapper and producer Justin Scott, aka Big K.R.I.T., is for you. As said by K.R.I.T., If it don’t touch my soul then I can’t listen to it. … Listen and enjoy.

Let’s face it: Being black in America is an everyday struggle, especially with the political climate of the United States today. In 2012, Wasalu Muhammad Jaco, better known as Lupe Fiasco, created this track to paint the problems in the American social, economic and political systems. Five years later, the words still resonate. If you need a track to raise your consciousness as the semester begins, Lupe’s got you covered.

We’re more than two years removed from the Meek Mill-Drake beef, yet Drizzy fans still refuse to acknowledge the greatness of this song. Even Toronto’s favorite son had to recognize it at one point. Regardless, it’s one of the best rap intros of all time. This song tells the tale of Meek’s dreamlike ascension in the rap game before launching into a full-blown assault on all his haters, with the Philadelphia native dropping knowledge throughout. From I had to grind like that to shine like this to I’m the type to count a million cash, then grind like I’m broke, the entire song is an ode to anybody who has endured the struggle. If you take that mindset into school, the sky’s the limit. Play this at any college party and everybody should be screaming this track verbatim. Key word: should.

On the final track of Rodeo, “Apple Pie” is Scott’s way of telling his mother that it’s time for him to go out into the world and make his own way. For many of us, college is that time. Don’t be afraid to follow in Scott’s footsteps and jump off mom and/or dad’s porch. Separation anxiety will hit you like a ton of bricks, but it eventually subsides. Anybody who went away to school empathizes with the line I hate to break your heart, I bet I’ll make the mark/ That y’all see a legacy go up.

Oakland, California’s own Kamaiyah initially burst on the scene after receiving Pitchfork’s “Best New Track” honors for “How Does it Feel” in late 2015. Her inspiration? She was trying to make “it cool to be broke again.” Being broke and college broke are two entirely different things. College broke is really humbling because you see how terrible things can be if you don’t find your side hustle. Sell mixtapes, work at the bookstore, become a party promoter — do something that’ll put a little extra change in your pocket. Making a way where there’s no way is what college is all about. And when you finally find your hustle, don’t be afraid do your little two-step while proudly singing I’ve been broke all my life/ Now wonder/ How does it feel to be rich?

If you are one of the unfortunate few who scheduled an 8 a.m. class, may God be with you. Luckily, the Drench God made a hook with you in mind: Get out the bed and grind and hustle/ Did it before and I’ll do it again. Make this your anthem and you’ll be able to take anything this cruel campus life throws at you — except maybe a pop quiz. At the very least, please try to keep your eyes open.

I definitely could’ve gone with the Drake version. Or even Elton John’s. But the Kid Studio-provided visuals place Big Sean’s version in a league of its own. Picture this: It’s 8 p.m. on a Thursday. That party starts at 10 p.m. That girl or guy you like wants to come over at 9 p.m. — and you have a test at 8 a.m. Friday. Big Sean said it best: To get ahead, man, you have to make sacrifices. Not every single event requires your presence. Stay in, tell that girl or guy to come over and study to get that A in the morning.

This one’s for the freshmen. The title says it all. Don’t get lost in the sauce. Start your college career on the right foot. Freshman year is by far the easiest, as long as you don’t succumb to distractions. Side note: Pluto don’t dance, but I make moves is one of the best bars off of HNDRXX, even if Future just flipped around The Weeknd’s opening line.

School can be extremely stressful. Trying to balance academics, extracurricular activities and a social life can often seem overwhelming. If you need help, please do not hesitate to ask. It is not a coincidence that the song title is the National Suicide Prevention Lifeline. Find your school’s Counseling & Disability Services Center. There are always resources available. Remember these lyrics — It can be so hard/ But you gotta live right now/ You got everything to give right now.

Paul Holston journalism major from Summerville, SC. He attends Howard University and served as 2016-17 editor-in-chief of The Hilltop.