Not by a long shot

Sometimes, you just have to say it.

Just ask Ayesha Curry. On Thursday night, en route to see her husband, Golden State Warrior Stephen Curry, play in the NBA Finals, the team bus she was riding was delayed to the point that it arrived at Cleveland’s Quicken Loans Arena not long before tipoff. Then her father reportedly had his identity mistaken and was threatened with an arrest.

After watching Curry throw his mouthpiece (at the son of a Cavaliers minority owner!) and get ejected from Game 6 against the Cleveland Cavaliers — his historic season one game from ruination — Ayesha Curry was furious. So she lit the match: 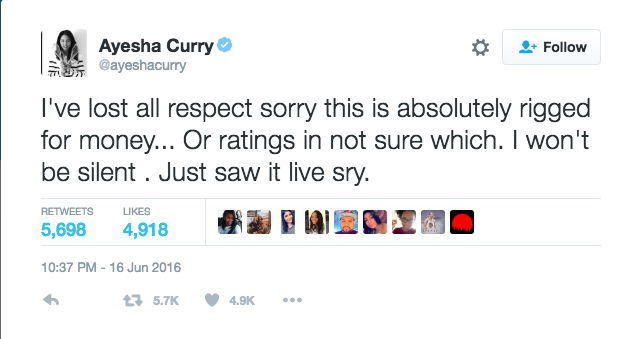 She would go on to apologize and explain, of course.

I'm okay that we lost… I just can't take people coming at my family for absolutely no reason. Something I don't understand or stand for.

Police racial profiled my father and told him to remove credentials and tried to arrest him. It's been a long night for me. I apologize:

tweeted in the heat of the moment because the call was uncalled for.

But it was too late. She got roasted.

Miko Grimes, the wife of Tampa Bay Buccaneer cornerback Brent Grimes, is someone with experience in this field. She had this to say about her husband’s former quarterback, Ryan Tannehill of the Miami Dolphins:

i knew this qb stunk the minute we signed to this team but i tried to keep quiet so i didnt discourage bae from believing in his team.

On Thursday night, Grimes hit Curry with some womanly advice:

Grimes’ wisdom aside, the thing is, she and Curry are not alone in loudly, publicly defending and voicing their displeasure at perceived injustices against their loved ones. Here’s a look at a few other times something strikingly similar to Thursday night has happened.

Those were the sharp words Cleveland Cavalier LeBron James shot toward his mother, Gloria James, in 2008 during Game 4 of the Eastern Conference semifinals. The offense? After then-Boston Celtic Paul Pierce wrapped up James and fouled him on a dunk attempt (it wasn’t that bad, but the crowd acted horrified), Gloria James was enraged and started screaming at Pierce. That’s when James said the four words that have birthed a website.

“I told her to sit down, in some language I shouldn’t have used,” James said after the game. “Thank God today wasn’t Mother’s Day. All I could think about is her … I know my mother. It’s fine, we’re good.”

To his credit, Pierce shrugged at the whole ordeal: “She was just coming to [the defense of] her son — that’s how moms are,” Pierce said one day later. “My mom probably would have done the same thing. But I wasn’t worried. LeBron had her under control.”

‘My husband cannot f—— throw the ball and catch the ball at the same time.’

It was mere moments after Giselle Bundchen’s husband, New England Patriots quarterback Tom Brady, had lost Super Bowl XLVI in 2012, and cameras caught her fuming — about to combust. In videos first obtained by TheInsider.com, Bundchen exploded.

To be fair, there were at least three really important drops in the fourth quarter of that game.

‘Girl, get outta my face with that crazy stuff.’

In 2002, Ann Iverson, the mother of former Philadelphia 76ers legend (and T.G.I. Fridays connoisseur) Allen Iverson, went off on a handful of Philadelphia reporters. The entire exchange is worth enjoying and remembering. The best part, however, kicks in at the end when a cardboard-stiff newsman tries to transition from Iverson’s mother scorching the earth to, well, anything else.

Following Game 6 of the Miami Heat/Charlotte Hornets series earlier this postseason, actress Gabrielle Union unleashed one of the greatest angry twitter rants of its kind ever. Earlier that night, her husband Dwyane Wade thought he should have received a foul call on a crucial play late in the game (it certainly looked like a foul, but the NBA would insist otherwise later), so Union took to Twitter.

And plsssss…hands straight up mean NADA if you get hit with the body down low. Stop it #FineEm

After the game, Wade told the Associated Press, “My wife’s got to deal with me tonight. I’m going to be pissed off all night.”

Lucky for me I like pissed off @DwyaneWade 😍😍😍😍 https://t.co/eWxoKw7cXb

The NBA went on to formally review the play and they sided with the officials on it. Of course, that wasn’t enough for the officials. They had to tag Union in their tweet as well.

The referees are not always right, but on this call we were. #NBA confirms the non-call in the L2M https://t.co/HhLkl0zB5v @itsgabrielleu