Back in the day: 40 years ago, Morgan State and Grambling played in Tokyo

Eddie Robinson coached the Tigers in the first Pioneer Bowl 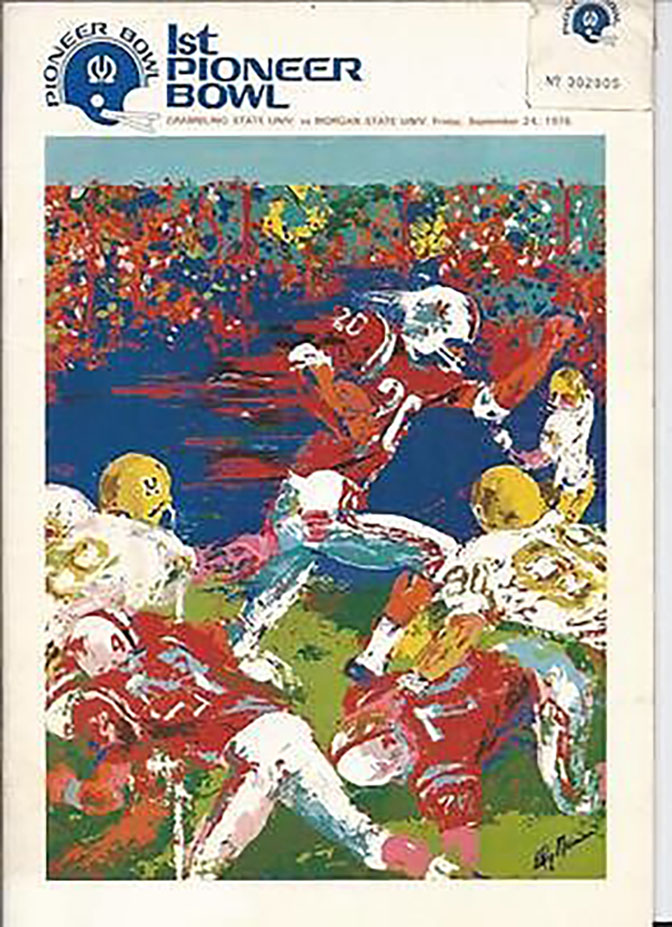 “Although their knowledge of the game was minimal, bolstered only by the explanation in the newspapers and on television, they were really turned on by the exciting plays. And, unlike American crowds, they stayed right through to the end.” — Hank Lattimore, head coach of Morgan State University football team in 1976

The game was played in Korakuen Stadium, known for hosting baseball games. They were selected to celebrate the U.S. bicentennial with the gridiron exhibition. The Grambling State Tigers, coached by legendary coach Eddie Robinson, were coming off two season-opening losses to Alcorn State and Temple. Hank Lattimore’s Morgan State Bears had won their opener 23-6 over Virginia State.

Still, this matchup aroused such anticipation because of the environment and the opportunity to witness a first. American football had been introduced to the Japanese by the U.S. military when they played intramural games after World War II.

There was a plethora of future NFL talent in football contests at top historically black colleges and universities (HBCUs) during the 1970s. In the Tokyo game, Doug Williams, who would become the first black quarterback to win a Super Bowl, led the Tigers. Defensive back Charles Johnson would play three seasons in the NFL with the San Francisco 49ers and St. Louis Cardinals. The New England Patriots selected wide receiver Carlos Pennywell in the third round of the 1978 NFL draft. Elvis Franks was a top defensive lineman for Morgan State who went on to play seven seasons in the NFL with the Cleveland Browns, Oakland Raiders, and New York Jets.

As for the coaches, Robinson is considered one of the greatest college football coaches. He retired in 1997 with a record of 408-165-15 and was inducted into the College Football Hall of Fame. Lattimore had a rough tenure at Morgan State, but in his first season he went 6-4 with a very young team. He went on to finish his coaching career at North Carolina Central and Virginia Union with 84 wins, 81 losses and five ties.

My father, Gerald Huggins Sr., played five years for Morgan State. He was a freshman when he played in the Pioneer Bowl.

“The Pioneer Bowl was a historical event in college sports. The game has not gotten the acknowledgement it deserves. Not taking anything away from Grambling, but they had already lost two games, and we were in the best shape of any college team in the country, and we had a bunch of athletes,” said Huggins.

“The game got out of control, and our inexperience began to show. It is a tragedy how often we as African-Americans do not treasure, cherish or even celebrate our historical accomplishments. We continuously miss the boat on leaving positive legacies for our future generations. This game should have been a preview of other games being played between HBCUs all around the world for the last 40 years.”

Grambling State brought its band. During the 1970s, the World Famous Tiger Marching Band was the baddest band in the land. The band was so “bad” that they were well-known overseas. The marching band gave the Japanese a taste of a Saturday afternoon at a black college game.

“The people of Tokyo were more familiar with baseball and at the time saw little to no football. The Japanese fans did abandon their typical impassive postures and showed tons of enthusiasm when the high-stepping Grambling band and their strutting cheerleaders graced the field of Korakuen Stadium,” said Sam Lacy, the legendary sportswriter for the Baltimore Afro-American.

“We have good players like quarterback Doug Williams and running back Merlin Williams, and I hope we have a good chance to win,” said Collie Nicholson, a spokesman for the Tigers, in an August 1976 newspaper article.

Well, winning is what the Tigers did. They broke their losing streak and went on to beat the Bears 42-16. Grambling’s Clifford Martin scored three touchdowns. Morgan State was held to three field goals by junior Duane Danner and a 28-yard touchdown pass from George Williams to Mark Durden. Doug Williams found Pennywell on a 22-yard score. Robert Woods scored on a close-in plunge, and Antoine Edwards scored on a 30-yard interception return for a touchdown.

The Bears went on to finish 6-4, and the Tigers were 8-2. The Pioneer Bowl was the last time the Bears played outside of the United States. The Tigers went back to Tokyo the following year and beat Temple 35-32 in the Mirage Bowl.

Since 1977, no other HBCU has played a football game outside the United States.

The question is, how do we get HBCUs back overseas to play an exhibition game? Until then, let’s not forget that two HBCUs showed the world what a good old Saturday afternoon of black college football looks like.

Gerald J. Huggins is a production assistant on Mike and Mike. He's a man of Omega, he loves all HBCUs, loved fried chicken Wednesdays at the Virginia Union University cafeteria and went bald because The Rock and Terry Crews made it look cool.