‘Ballers’ recap: no pain, no game

Spencer is fiending, also has a Trumpian moment

After some digging (on Google search), I’ve gotten to the bottom of my No. 1 Ballers mystery. Why the hell does the show’s opening have a clip of tiny dogs running on a treadmill? Last week, I hypothesized that the show’s creators used it as a commentary on how we view professional athletes. As a former pro athlete myself, I know how they’re loved and doted over, but not respected.

At 11 p.m. on Sunday, after watching Spencer (Dwayne Johnson) and Andre (Andy Garcia) fight over Terrell Suggs, and Joe manipulate Vernon, I thought I was right. I felt good about sniffing out some symbolism. I was just about to email a pompous film professor I had in college, who gave me a “C” on my final paper, in which I proposed that 1983’s Scarface was a veiled critique of capitalism and the hedonic cycle. That was a good paper, jerk. Meanwhile, doing some lightweight Googling for validation of my Ballers theory, and in the first result, Chad Sikora, animations supervisor for The Molecule, the company that created the opening, gives a simple explanation: “If someone giggles, it’s worth leaving in,” he said. “We want to remind people of the show’s softer, comedic side.” (Fun fact: The pugs actually belong to the show’s creator, Stephen Levinson, who used his smartphone to film them at home.) So, maybe that “C” was deserved.

Suggs continues his reign as the most skilled actor of all the active NFL players to cameo on Ballers.

The episode begins with a catchy mix of two Mansionair songs, Pick Me Up and Hold Me Down. It’s morning and Spencer limps to the bathroom to eat his last few Vicodin. Yes, eat is the proper verb. I’ll never understand why so many fictional addicts chew pills rather than swallow them. Seems so inefficient. And fiends and addicts are nothing if not efficient with their drugs.

Soon Spencer’s white Range Rover is turning from First Street onto 17th Avenue. A billboard for a lawyer is visible in the distance. Momentarily, above Spencer’s car the billboard reads, in an enormous lime green font “INJURED?” For Spencer the answer is obviously yes. While driving, Spencer answers a call from his girlfriend and sports reporter, Tracy Legette (Arielle Kebbel). She informs Spencer of a Bleacher Report article, which I can only assume was written by Mike Freeman (@mikefreemanNFL) that says he and Terrell “Sizzle” Suggs made up after a televised fight. Tracy jokes, “How was the make-up sex?”

Tracy complains to Spencer about Mitch, a new reporter who makes more money than her despite being new. Spencer consoles Tracy by saying “f— that guy, he’s a c— s—–.” Oh, one thing Spencer, don’t ever again wear a polka-dot tie with a gingham shirt, and a plaid vest.

Continuing with his fiendlike behavior, Spencer ends the call with a lie. He tells Tracy he just got to work, when in actuality he is at a pharmacy trying to cop. He finds out that his prescription is overdrawn and he leaves with no pills.

I’ll never understand why so many fictional addicts chew pills rather than swallow them. Seems so inefficient.

Spencer finally gets to work, where he is greeted by his partner, Joe (Rob Corddry), and assistant, Virginia (Tiffany Jeneen). We were introduced to Virginia briefly last season, when she showed Spencer his new office and told him he was “fine as hell.” She starts this season with the hots for Sizzle, telling Spencer, “[Sizzle] marched in, made himself right at home; if he wasn’t so fine, he’d get a piece of my mind.” Joe and Virginia seem surprised by Sizzle’s presence, but Spencer is not. He invited Sizzle with the intention of stealing him away from Andre, Spencer’s former adviser and nemesis. Spencer and Joe meet with Sizzle over lunch in the conference room. Suggs compliments Spencer and Joe on their ability to party, to which Spencer replies, “We’re gangstas.” This brings me back to the core mystery of Ballers: Why in the hell would anybody ever entrust their financial future to Spencer Strasmore? I know it’s a TV show and I have to suspend some disbelief, but this is tough.

Reasons not to hire Spencer

OK, back to the show. Suggs continues his reign as the most skilled actor of all the active NFL players to perform a cameo on Ballers. He’s playing himself, so maybe he doesn’t deserve an Emmy. But in the conference room scene he shows some insecurity and uncertainty about his ability to return to his previous level of dominance. If you know Suggs like I do, acting insecure and uncertain of his abilities is unnatural — that was 100 percent acting. In the meeting, Suggs complains about Andre, while Spencer rebuilds his confidence and Joe tries to sabotage the meeting. Joe warns Spencer about the danger of poaching clients from Andre, one of the most powerful men in Miami. Spencer does not heed the warnings and persuades Sizzle to call and fire Andre on the spot. Sizzle doesn’t have the heart to fire Andre over the phone after Andre invites him to a tennis tournament. So, Sizzle tells Spencer and Joe to go to the tournament and fire Andre for him.

Tracy has lunch with her sexist boss, Jim. Jim calls Tracy “Legs,” before she brings up her concerns. Tracy ignores the nickname and begins to explain her issue, when Jim interrupts her and changes the subject. He pushes Tracy to leverage her romantic relationship with Spencer to break a story, while checking out every woman who walks by. Angered by Jim’s behavior, Tracy tells Jim that she knows Mitch makes more than her and quits. Jim, having no ability to read the situation, shouts, “Come on, Legs,” as Tracy walks off. 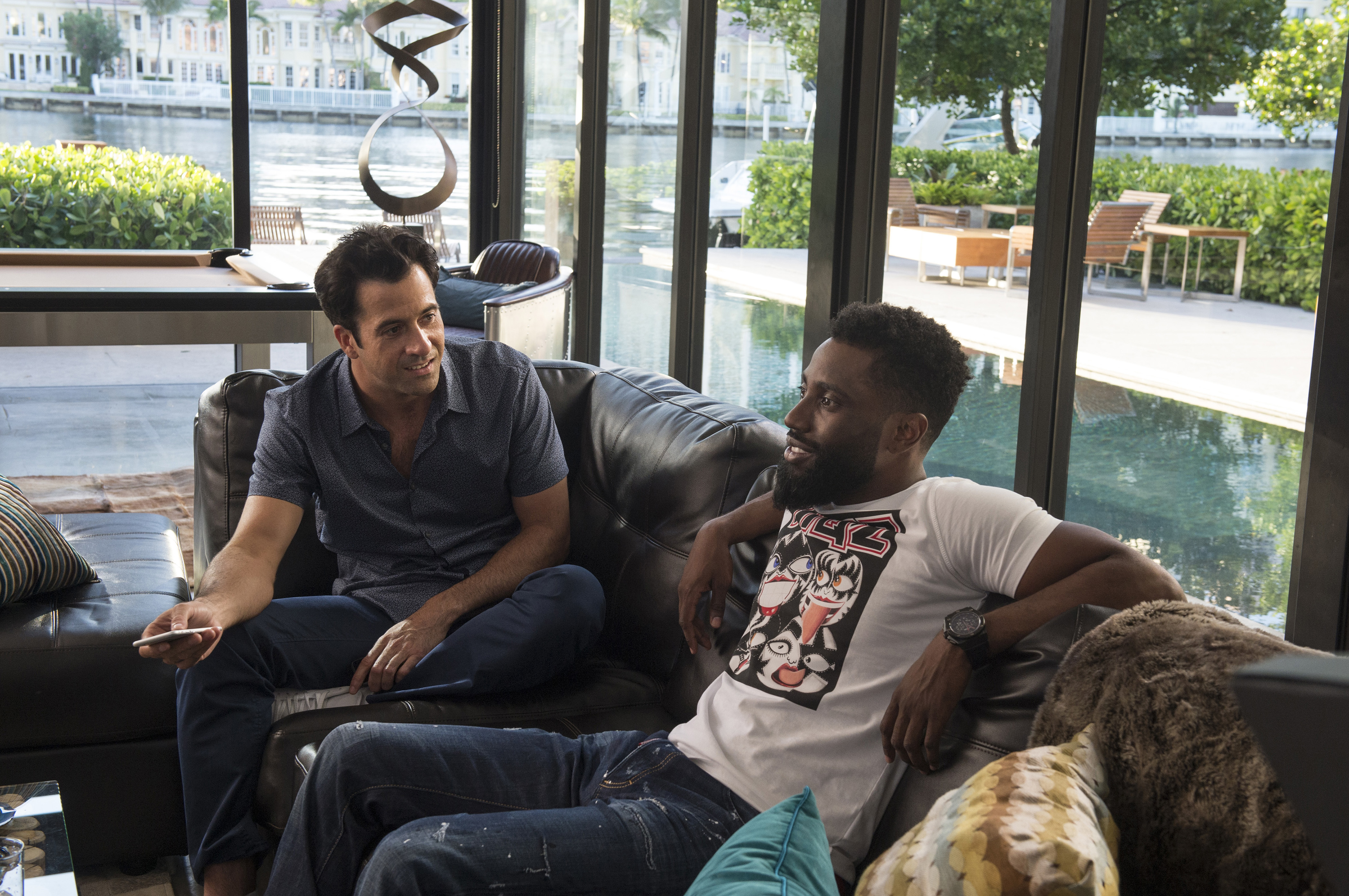 Ricky (John David Washington) is home getting hit with a stick by Charles (Omar Benson Miler). It is Ricky’s way to prep his body for the pain he will experience in the coming season. Last week, Ricky was in a cryotank, which is odd, but professional players do spend a lot of time in ice baths to help their muscles expel lactic acid and recover. But Ricky’s abnormal training technique for this week is being beaten, with a stick, by an offensive tackle. I have seen teammates try odd things to get an edge, but never anything like this. I know some boxers do this as part of their training, but it is not something I have seen done by footballers. The writers have to top this next week — I’m looking forward to see what they come up with. Ricky is frustrated that he is still without a contract. Spencer reassures him that he will get the money he deserves. But Spencer has less inspiring words for Charles.

Meanwhile, Reggie (London Brown) is in Joe’s office trying to figure out how much he deserves to be paid, by Vernon (Donovan W. Carter), for … um … I don’t know. He lists a few responsibilities, but he left out the most important responsibility of a flunky — to take the rap. While Vernon is practicing his rip and swim move, Reggie should be in the mirror practicing his lines, “Officer, that [illegal substance] is mine. Vernon had no knowledge of the [illegal substance/activities].” Inexplicably, Joe tells Reggie he is worth $1,500 a week.

Spencer goes to Tracy’s house, where she is finishing a bottle of wine out of a glass the size of her head. She drunkenly recounts her career. She seemingly represents all women in the workplace, who do everything right, but still end up less appreciated than men. She ends with, “You guys really suck sometimes.” Spencer, presumably speaking for the entire male gender says, “Yeah, we do.” I wish they would’ve fully embraced the humor of Ballers giving a gender equality lesson by making the next scene of naked women dancing at a party. Instead the next scene is of Spencer carrying Tracy to bed, then looking in her medicine cabinet for prescription painkillers, I assume.

Inexplicably, Joe tells Reggie he is worth $1,500 a week.

Vernon talks to Joe about a salary for Reggie — before he goes paintballing. Joe plants the $1,500 figure in Vernon’s head. Proud of his ability to manipulate Vernon and Reggie, Joe pantomimes moving the strings of a marionette. Spencer manages to talk his doctor into giving him another prescription despite her misgivings. She makes him promise to get an examination within 10 days. Back at Ricky’s house, he is reviewing potential new teams with his agent, Jason (Troy Garity). Ricky seems most interested in going to New Orleans.

In the middle of paintball, Reggie and Vernon try to negotiate Reggie’s salary. They disagree on the amount. Later in the match, Reggie shoots Vernon, who falls and hurts his leg, putting his season in jeopardy. This will likely cause the rift between Reggie and Vernon to grow. Over beers with Charles, Coach (Peter Berg) tells Charles that he’ll be moving from the more prestigious left tackle position to right tackle. Charles calls the quarterback, who happens to be Ryan Tannehill, a “candya–.” Given the fact that Tannehill’s wife, Lauren, has been known to drive around with an AR-15, I’d suggest Charles cool it on the insults.

I wish I could say that players would never do something that ridiculous, but we would. I’ve seen it a few times.

At the tennis tournament, Spencer asks Joe to hit him in the face to get the “competitive juices flowing.” I wish I could say that players would never do something that ridiculous, but we would. I have seen it a few times. Former Jacksonville Jaguars defensive tackle John Henderson used to have the equipment guys on the team slap him before games (those were some gutsy little guys). Rain forces the tournament crowd under tents, where Spencer and Andre sit to discuss Suggs’ future. Andre makes it clear that he does not respect Spencer or the players whose money he manages. The episode ends with Spencer firing the first shot in the war between him and Andre. Channeling Donald Trump, he says, “On behalf of Siz and all the other football players out there, you’re f—— fired.”

The screen goes black, but the fun isn’t over. The closing credit contains a classic Andre 3000 verse from Outkast’s 1996 ATLiens. I know what I will be listening to all week. Stank you very much.