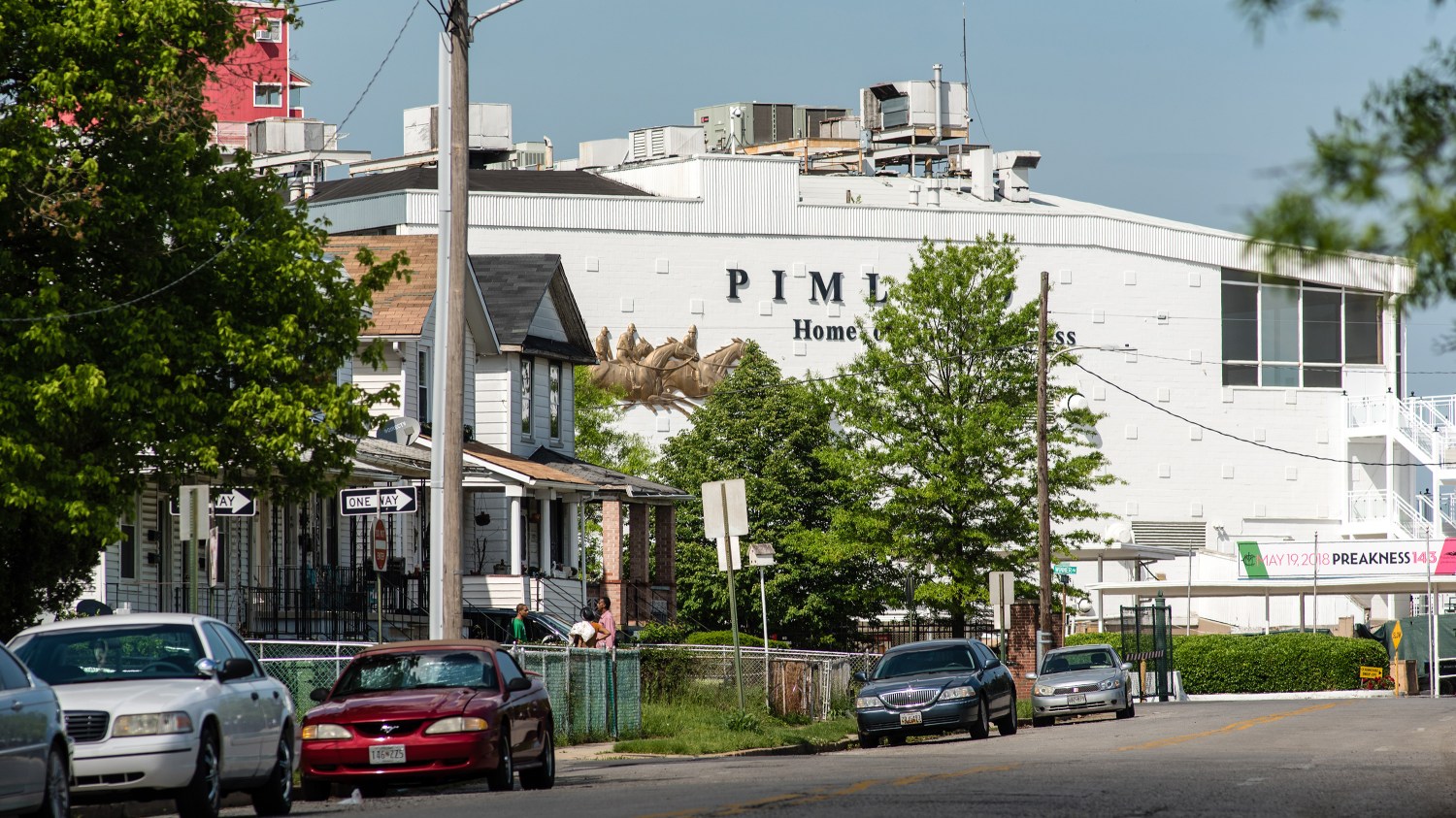 Some of the houses on Hayward and Winner avenues in Baltimore are within sight of Pimlico Race Course, home of the Preakness Stakes, but residents and owners have seen little benefit from their proximity to this 146-year-old event. André Chung for The Undefeated
Horse Racing

In Northwest Baltimore’s Park Heights neighborhood, more than 100,000 people are expected to gather Saturday to watch the 144th Preakness Stakes at the rundown Pimlico Race Course.

However, few residents of this depressed, low-income and largely black community will be attending the second leg of thoroughbred racing’s Triple Crown. But for generations, they have made extra cash allowing race fans to park on their front lawns and selling cooked food or trinkets from their stoops. Corner stores and carryout spots have charged fans anywhere from $5 to $20 just to use the bathroom. Even the drug dealers clean up on Preakness Day.

“The white folks come up here once a year to gamble and get drunk. Some of them come across the street and buy a little weed or some crack. The police just sit there and don’t do nothin’ because they get paid off by the corner boys to look the other way,” said 51-year-old Ray Johnson, who grew up in the neighborhood. “When the race is over, they get outta here before it gets dark. They don’t give a f— about this neighborhood until the next year.”

Park Heights is one of several Baltimore neighborhoods where gun violence is endemic. But residents here also have concerns about whether the city will continue with its revitalization plan demolishing unsightly and deteriorating buildings – or even the racetrack. And they are not alone in pondering the possibility of this home to horse racing being torn down, and its signature event – the Preakness – being moved to Laurel Park racetrack midway between Baltimore and Washington, D.C.

Eight miles away from Baltimore’s Inner Harbor, where businesses have struggled to attract tourists since the city’s Freddie Gray uprising in 2015, bright yellow hydraulic excavators rest their arms and dirt-caked bucket lips on vacant lots along Park Heights Avenue. They’ve ripped through arched windows, gnawed out rotted beams, and scooped up brick foundations from boarded vintage row homes and dilapidated businesses built many decades ago.

Melvin Ward, the 58-year-old owner of Kaylah’s Soul Food restaurant, came to Park Heights with his family when he was 5. “I saw this neighborhood when there were no black people here. My family was one of two black families in this neighborhood. It’s gone far down since then. I don’t think the neighborhood will get worse if they move the Preakness to Laurel,” Ward said.

Until the Martin Luther King Jr. riots of 1968 combined with a mass exodus of whites and professional blacks to the suburbs, this was a largely close-knit Jewish neighborhood with thriving specialty shops, synagogues and Hebrew schools, and homeowners who swept the alleys. The entire stretch of Park Heights, from Park Circle to Pimlico, quickly transformed racially from almost entirely white to largely African American.

In 1947, Life magazine declared that horse racing was “the most gigantic racket since Prohibition.” An estimated 26 million people went to the tracks at that time. Big races attracted all kinds, from nuns to black numbers runners to then-FBI director J. Edgar Hoover, who traveled from Washington, D.C., to Pimlico on Saturdays in a bulletproof limousine.

Along Park Heights Avenue, decades of divestment and a grim litany of urban problems are evident. But the sites won’t be captured for television audiences on Preakness Day. Viewers won’t see the dumped mattresses, tires and garbage on desolate blocks, the high concentration of liquor stores and convenience shops. Nor will they see the hollowed-eyed, gaunt drug addicts lurking along the sidewalks or nodding off at bus stops.

Residents here joke that most viewers outside Baltimore probably have no clue that the Preakness happens “in the middle of the ‘hood” instead of beautiful horse country.

If you stand at the corner of Park Heights and West Belvedere avenues, you can see there’s a commercial district neighboring the track where the Preakness has been held since 1873. There’s detritus and despair, thick veils of cigarette smoke, the smell of liquor and urine heavy in the air.

Over the past few months, the Canadian-based Stronach Group, which owns and operates Pimlico, has been locked in a feud with city officials over Pimlico’s future. It has become increasingly clear that Stronach wants to move the Preakness from Baltimore and tap $80 million in state funds to build an upscale “supertrack” in Laurel Park, where it has invested a significant amount of money.

City officials want to revitalize Pimlico and keep the Preakness, but a study conducted by the Maryland Stadium Authority estimated that it would cost more than $400 million to rebuild the racetrack.

Tim Ritvo, Stronach’s COO, indicated that Pimlico is “at the end of its useful life” and is no longer a safe and viable site for the Preakness. Baltimore filed a lawsuit alleging that Stronach “systematically under-invested in Pimlico” while pouring most of the state funds it receives into improving the Laurel Park facility. Former Mayor Catherine Pugh, who recently resigned over financial improprieties, argued a rotting, unsafe race complex helps the company justify moving the Preakness from Baltimore.

In mid-April, proposals to finance improvements at Laurel Park were debated and failed in the Maryland General Assembly. Stuck in an unfortunate status quo with no real agreement on how to move forward, Baltimore’s new mayor, Bernard C. “Jack” Young, is expected to continue Pugh’s efforts to fix Pimlico and build a new hotel and grocery store for the community.

Local media coverage has indicated that popular bars and restaurants in areas such as Federal Hill, Towson and Fells Point would feel the pain if the Preakness leaves. They’ve raised bigger questions: Does the wider racing world care if the race is moved out of Baltimore? Does the Preakness have to stay in the city for it to retain its cachet? In all this debate, missing from the conversation are black voices, which reveal a deeper story about the social costs of sports as America’s inner cities are struggling to reimagine themselves by using sports stadiums to spur economic growth and demographic change.

The fate of Pimlico as home to the Preakness and as a racetrack is also balanced against the views of its African American neighbors, who have seen their communities deteriorate even more over the past half-century from absentee owners, intentional neglect, the war on drugs, and other failed local and national American policies.

Do the people of Park Heights really care about keeping the track — perhaps the area’s only surviving historic landmark and focal point? Would Pimlico’s Canadian owners be so willing to leave if the surrounding neighborhood were white and middle class? Stronach Group did not respond to requests for an interview for this story.

A number of residents like to put on their conspiratorial hat when they talk about what’s happened to the racetrack. Many residents believe that the owners let the track rot to justify a move to Laurel Park. The conditions at Pimlico symbolize how the city has neglected black communities for decades, and they see letting Pimlico and the rest of the neighborhood die as the start of gentrification.

The question is: What then? How will the site be used? Would Sinai Hospital on one side of Pimlico obtain some of the land if it becomes available? If any of the land is redeveloped for housing, would it be affordable, market rate or a combination?

“Pimlico is not a sign of life for this neighborhood,” Ward said. “Horse racing is dead. The Preakness does nothing for the community. If it leaves, things will be the same as they always are here.”

Andrae Scott, 37, whose father owns Judy’s Caribbean Restaurant, on Park Heights Avenue across from the track, said white people come through not to buy food but to use the bathroom, which they are charged for, since many come in drunk and vomit. “They’re already pushing black folks out of the area. You can already see them knocking down houses and tearing up streets,” Scott said.

Some residents want the Preakness to stay. Prince Jeffrey, 28, is a Nigerian immigrant working at the EZ Shop directly across from the racetrack. On Preakness Day, his store can make upward of $2,000, versus his daily average of $600, with sales of junk food, chips, water and crates of juices. “I think they should leave it. Development would make the whole area better. If they move the track, this place will go down,” Jeffrey said.

LaDonna Jones, 53, believes that Pimlico’s owners have sabotaged it to have an excuse to leave. “Some other tracks across the country have live racing from now until late fall. This track runs races for two weeks for the Preakness. They don’t try to get any additional business.”

Jones noted that there have been efforts to arrange concerts there, but the number of outside events has declined — Pimlico is not seen as a welcoming place.

Her friend Roderick Barnette, who is convinced that the track will be closed, said, “There’s no money here. This is a drug haven. White people come here once a year, they gamble, make their money and get the hell out. In Laurel, they can make more money because there’s more white people. I’m just keeping it real.”

When Jones suggests that “they can revitalize here,” Barnett interrupts. “This is Park Heights! This is a black neighborhood! They’re gonna get rid of all these black people around here just like Johns Hopkins did downtown.”

Jones concedes while noting that “this racetrack matters to black folks here. It’s part of their life and the way they’ve always lived. They look forward to the races. They make a little quick money. If it shuts down, Pimlico will be just another vacant building and another eyesore for Baltimore City.”

Beyond the once-yearly activity and attention that come with the Preakness, Park Heights still creates a sense of possibility in the face of its challenges. Some Caribbean groceries sell fresh foods. The recent election of Baltimore City Council president Brandon Scott, who grew up in Park Heights, is seen as a sign of hope. While Park Heights is generally a hard place to live, it is a community where some decent people find joy in the face of uncertainty and believe in the spirit of the place they call home. The fate of the Preakness will have an impact, but it will not define them.

Meanwhile, the latest news is that the Preakness will stay in Baltimore another year. But beyond 2020, the future of the race remains unclear.

Stacey Patton is a contributor for The Undefeated. She teaches multimedia journalism at Morgan State University and is the author of Spare the Kids: Why Whupping Children Won’t Save Black America.