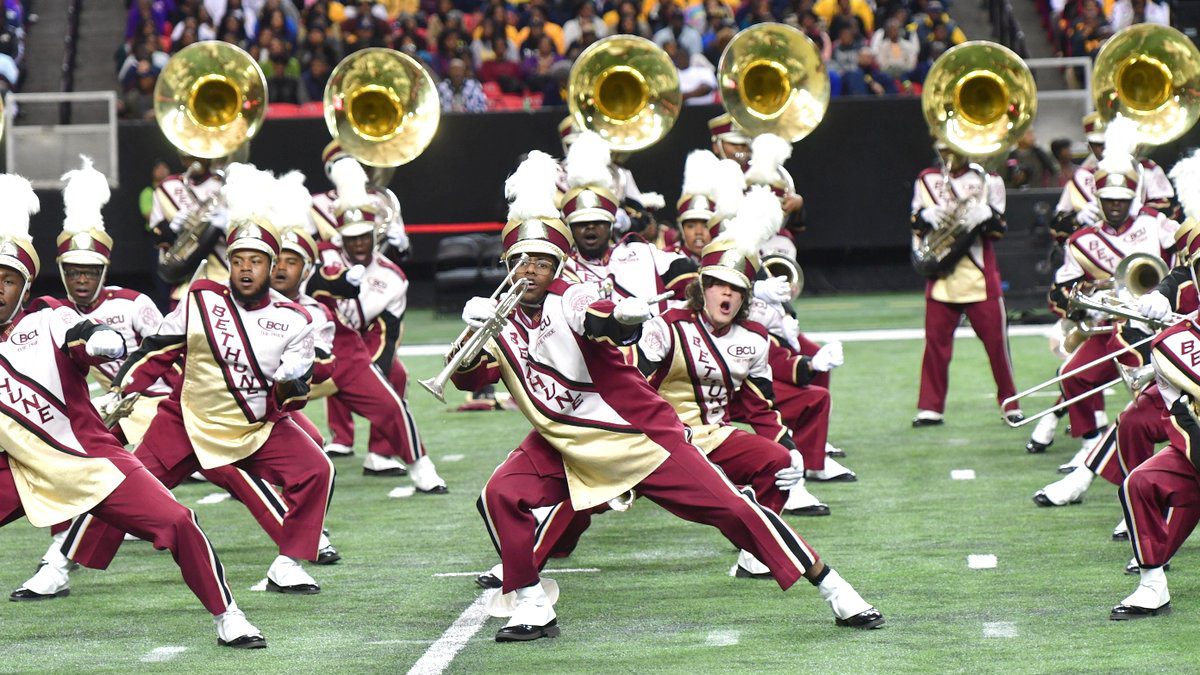 Prince Williams/Honda Battle of the Bands
The 5th Quarter

Honda’s Battle of the Bands featured some serious hits

On Jan. 28, amid the rush of fans purchasing Atlanta Falcons gear and parades being held before the beloved football team’s first Super Bowl appearance since 1999, another party was brewing inside the Georgia Dome.

Members of eight historically black college and university (HBCU) bands took their places in the stadium, anticipating the arrival of band heads who would cheer them on during the 15th annual Honda Battle of the Bands.

“I have the utmost respect for these student musicians,” Ne-Yo said before the event. “I know the difficulty that comes with performing, but I’m not worried and I don’t feel like they’re worried. I feel like everybody’s here to play, so I think it’s going to be a fantastic event. I know that [all the bands] are amazing, so I’m just anxious to see who’s gonna get out there and really come with it.”

In true HBCU fashion, the on-time start of the show began with a prayer, then Lift Every Voice and Sing, commonly referred to as the black national anthem. The Star-Spangled Banner followed.

More than 55,000 fans of the featured colleges and universities packed the Georgia Dome for the last time to support their favorite bands. Up first was newcomer Benedict College, which would be performing for the first time at the showcase. Here’s a recap of how it all went down.

If members of the Marching Tigers “Band of Distinction” were nervous, it never showed. Benedict, one of the smaller bands of the day, approached the field confidently before immediately launching into Kool & the Gang’s 1980 hit Celebration, followed by Stevie Wonder’s Signed, Sealed, Delivered I’m Yours. It was the band’s showmanship that commanded the crowd’s attention.

Many fans sang along while others danced in their seats. After a few other selections, the band brought a modern flair to its set, the band showcasing its dance moves while playing one of 2016’s catchiest songs, Juju on That Beat by Zay Hilfigerrr and Zayion McCall. The set continued with Choppa’s Choppa Style, and the band quickly transitioned to Bell Biv DeVoe’s Poison, prompting the crowd to get up and dance. The band, now hyped from its performance, exited to Lil Boosie’s Wipe Me Down, leaving its energy to be matched by the next band to hit the field.

Next up, Texas Southern University.

The band made it to center field and prepared for one of the most unique sets of the day. The Ocean of Soul ensured it wouldn’t run the risk of its songs being repeated by taking the audience through a musical journey of theme songs associated with the best classic television shows. The band began with 1980’s hit show 227, and followed with Good Times, Diff’rent Strokes, In Living Color, A Different World, Martin, The Fresh Prince of Bel-Air, The Cosby Show and The Jeffersons.

Alabama State University entered as the crowd anticipated what was next to come. The band, the center of the reality show Bama State Style on ASPiRE TV, proved why they’re worthy of being followed.

It was the quality of sound and crafty formations from the Mighty Marching Hornets that made the performance stand out. At one point, the band formed two cars — one representing Honda and the other, a competitor. Fog machines at the tail end of the car brought the scene to life as the two vehicles raced on the field, all while the band played on. Lauryn Hill’s Ex-Factor seemed to be the band’s strongest song set and a crowd favorite.

The band saved the best for last. As the tune to Shawty Lo’s Dey Know began, the Honey Bees — six dancers clad in shimmering gold bodysuits — entered front and center. Their mix of fluid dance moves and acrobatics — cartwheels and even flipping over each other— led to a standing ovation from the crowd, capping off an enjoyable set.

The Red Sea of Sound Marching Band took to the field as the last performance before halftime. The band, returning to the event for the fourth time, stood neat and polished. Although smaller than some of the previous bands, there was power in its sound. It was heard as the band played a rendition of Usher’s She Came to Give It to You as well as John Legend’s Tonight (The Best You Ever Had). After playing the slow jams, the band turned to up-tempo tunes such as Destiny’s Child’s Lose My Breath, Nelly’s Hot in Herre, R. Kelly’s Ignition (Remix) and wrapping up with Young Jeezy’s Put On before award-winning artist Ne-Yo’s halftime show.

Ne-Yo puts on a show during halftime

When Ne-Yo learned of the opportunity to perform at the Honda Battle of the Bands, he didn’t hesitate to say yes. HBCUs rank as one of the 37-year-old singer and songwriter’s top priorities, which is one of the reasons he accepted a role in the 2007 hit film Stomp the Yard. “I did Stomp the Yard because of my affinity for [HBCUs],” he said. “HBCUs are incredibly important for our communities, for our country, for our culture and they always have been.”

Ne-Yo stepped on the stage to give his all in a mini-concert that sent many fans traveling back down memory lane. The singer enthusiastically performed nearly all of his hits, including his 2006 Billboard chart-topping single So Sick all the way to his latest collaboration Time of Our Lives with Pitbull.

The second half of the intermission included the Power of Dreams award ceremony. This year’s recipient, N. Jean Hudley, was honored for her work in the community through her organization Boys2Men Home and Sanctuary for Youth, Inc., a nonprofit organization in Georgia designed to aid underserved young men who are often neglected.

Before the halftime intermission could wrap up, Bethune-Cookman marched out of the tunnel to a howling crowd. Fans were ready for a show, and the band’s 300-plus members were ready to give them one for the 12th time — the most in Battle of the Band’s 15-year history.

“Anytime you come to Honda, it’s a feather in your cap,” said BCU band director Donovan Wells. “It says what you’ve done during the season has impressed a lot of people and for that to happen to us 12 times, that says a lot for us. Even in the 15th year, a lot of schools haven’t had the opportunity to come here at all, so we don’t take it lightly.”

The band was one of the largest of the day, taking up the entire end zone as they waited to approach the center of the field. Once the band began playing the Universal Studios movie introduction, the real show began.

The Marching Wildcats balanced its performance between old-school and current R&B, hip-hop and pop with songs such as the Isley Brothers’ Spend the Night (Ce Soir) to the Big Tymers’ Still Fly and even DNCE’s Cake by the Ocean. The band even got creative, winning over Atlantans in attendance by forming the Atlanta Falcons logo on the field.

Large and powerful, Bethune-Cookman mastered staying in sync, entertaining the crowd with dance moves while never losing the quality of its sound.

As Bethune-Cookman wrapped up its performance, The Sounds of Dyn-O-Mite — one of the larger bands this year — split up, entering the center of the field from both sidelines. When the band did meet at centerfield, it didn’t take long for the audience to realize this band wasn’t shy. Immediately, the horns were the first to be heard, loudly blowing out tunes and prompting fans to clap, dance and sing along. The high-energy performance included some of Atlanta’s cult classics including 24’s by T.I., and Yung Joc’s It’s Goin’ Down. The bonus? Being able to witness members of Alabama State’s band mimicking the throwback dances to go along with these songs. Well done.

The second band from Alabama was ready to make its march in the showcase for the fourth time. The band came out quietly, but opened up to the crowd by beginning its show with Quincy Jones’ 1980 popular hit Ai No Corrida and launching into Michael Jackson’s P.Y.T (Pretty Young Thing). The Marching Maroon & White stayed on track with the old-school jams with George Benson’s Give Me the Night before switching to hip-hop, with Terror Squad’s Lean Back, UNK’s Walk It Out and the latest club banger, Bad and Boujee by Migos.

In a special surprise, Alabama A&M alumnus Ruben Studdard appeared before the unsuspecting crowd. The crowd erupted in shouts and applause for the American Idol winner, who performed a smooth rendition of Luther Vandross’ If Only for One Night as the band quietly played in the background. Easily the highlight of the band’s set.

Texas Southern wouldn’t be the only band with a theme at the show. At first, it seemed as if The Blue and Gold Marching Machine only targeted the oldies but goodies, and they had — until fans realized nearly every oldie but goodie was related to Bad Boy Records in some way. It was a pivotal moment in the set as audience members bobbed their heads, some trying to catch the next tune before it was played. The band went through a list of hits: Faith Evans’ Love Like This and Love Don’t Live Here Anymore, The Notorious B.I.G.’s One More Chance and P. Diddy’s Bad Boy for Life, to name a few. It was a theme that kept Aggie fans turning to each other excitedly and crowds anxiously guessing what was to come as hit after hit rolled effortlessly from the band.

The band’s last song, Puff Daddy’s I’ll Be Missing You, was accompanied by a tasteful RIP BIG formation to complete the performance.

It was the moment most fans looked forward to. All bands came together on the field to perform a four-minute medley written by Florida A&M University’s professor of music and Battle of the Bands’ guest conductor Lindsey Sarjeant. With Sarjeant at the helm, the bands began playing Kool & the Gang’s Celebration before smoothly transitioning to Frankie Beverly and Maze’s Before I Let Go. The bands moved along to Bruno Mars’ 24K Magic before ending with Earth, Wind & Fire’s Fantasy.

It was the perfect ending to a day filled with stellar performances, fun, dancing, laughter, and a strong display of love and support shown to the HBCUs. That’s what it’s all about.