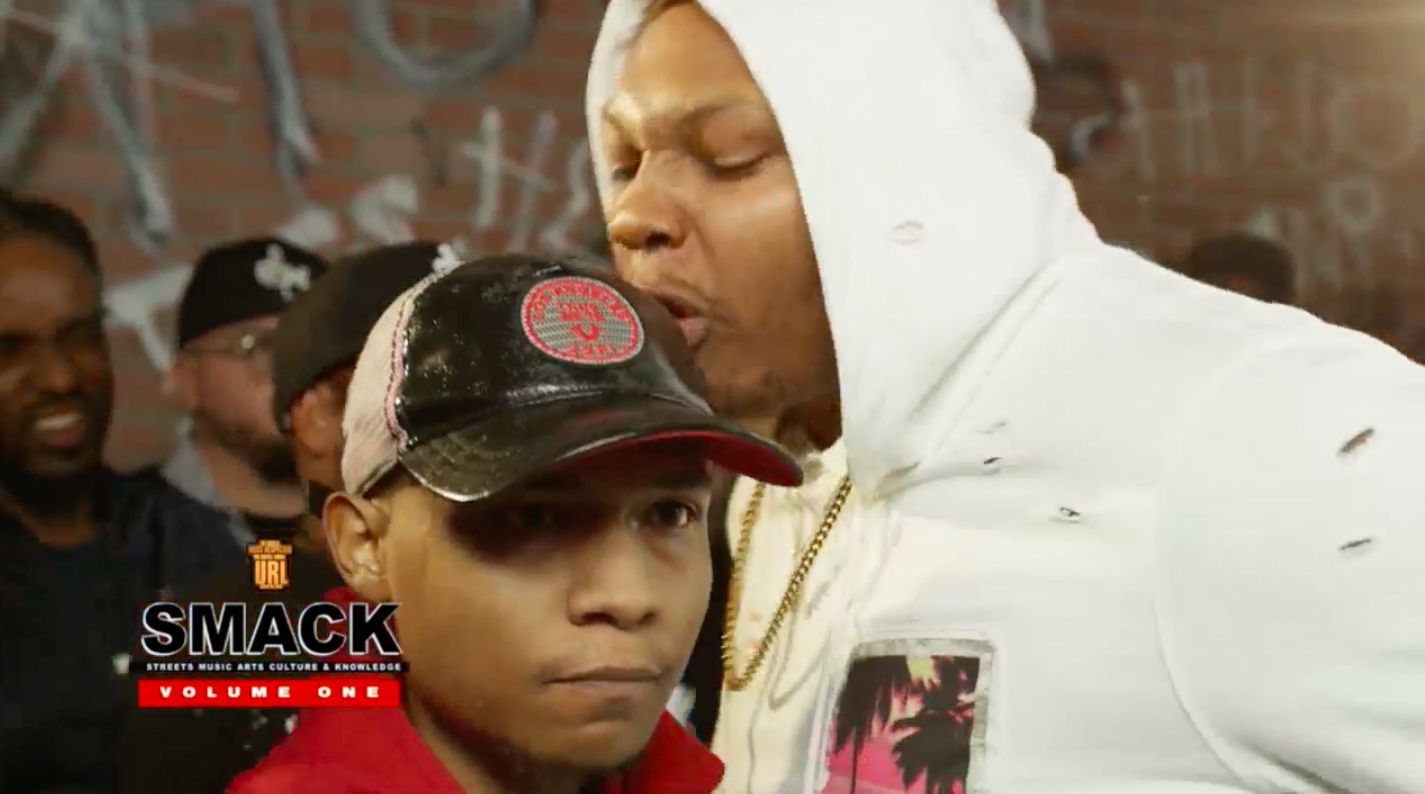 Pay-per-views, Reddit rabbit holes — and a semi-ridiculous new TBS show: battle rap is back — if it ever left

The gloves-off battles are sweaty, verbal MMA fights, with rappers getting directly in each other’s faces

On Dec. 9, dozens of rap fans crowded into a tiny, undisclosed location to watch a night full of rap battles — including a battle between Rum Nitty and Iron Solomon, who stole the show in what may go down as the most exciting battle of the year — as MCs traded mostly pre-written bars, insulting each other for three timed rounds. The event, called Smack Vol. 1, was held by the top battle rap league in the country, URL — for Ultimate Rap League. The fact that there were only dozens of fans in attendance is a misleading representation of battle rap’s popularity.

The small venue for Vol. 1 was by design — an attempt by URL to take the event to its roots of intimate crowds. But in actuality, battle rap events draw hundreds of fans, while thousands stream them live on pay-per-view before watching the battles on YouTube by the millions. Battle rap is a simmering subculture. It dominates Reddit threads, message boards and YouTube — and it’s going mainstream.

For instance, Drop The Mic. The Tuesday night TBS show is a spinoff of the rap battle segments from James Corden’s Late Late Show in which he battled celebrities like Kevin Hart and Anne Hathaway. Celebrities like the stars of Big Bang Theory lob rhymed insults at each other. The Seattle Seahawks’ Michael Bennett recently battled Vanessa Hudgens — to the tune of almost 1.4 million views. Hosted by Hailey Baldwin and Wu Tang rap legend Method Man, the show employs artists from the battle scene to help contenders craft lyrics and presentation. Drop The Mic is a gentrified but entertaining look at a battle scene that has been bubbling under the surface of mainstream American pop culture for decades.

The godfather of the modern-day battle rap scene is Troy “Smack” Mitchell. He’s an enterprising Queens, New York, native who set out to document New York rap culture in the early 2000s by recording guerrilla-style interviews of rappers. “I had access to a lot of MCs … because I was in the streets and knew a lot of people,” says Mitchell. “I really grinded … waited for artists outside of clubs. It just blew up from there.” He released the interviews and exclusive freestyles on his Smack DVD series, which features early looks at rappers like Kanye West, Cam’ron and Beanie Sigel. The series was hugely popular in the pre-internet era. And at the end of each DVD was a rap battle.

Kevin Durant once stood on stage, right next to Smack himself, in breathing distance of the battlers.

“We came up doing the battles as kids,” says Smack. The rap battles on the Smack DVDs took place on street corners, barbershops and clothing stores. MCs surrounded by dozens of spectators. The rappers had prepared “rounds” of timed raps directed at their opponents. No beats played, and if there was a stumble, slip-up or stutter, the rapper’s round was over.

The competitions were intense and legendary, and they helped rappers like Murda Mook and Jae Millz get signed to Ruff Ryders and Young Money. Smack brought battles to living rooms, even though the competitions have been part of hip-hop lore since the genre’s inception.

Here’s your history lesson: Rappers have always tested their mettle against one another. Big Daddy Kane used to roam the Big Apple streets challenging the best rappers. Jay-Z and Busta Rhymes infamously rapped against each other in high school. And a young rapper named Biggie Smalls made his name taking on all comers in freestyle competitions.

But it was Eminem’s 2002 8 Mile, in which he battled to famous rap beats like Mobb Deep’s “Shook Ones,” that introduced battle rap to the mainstream. The battles in 8 Mile were fictionalized takes on the real-life Scribble Jam battles that Eminem participated in during the late ’90s — and which got him noticed by Dr. Dre in the first place. By 2003, rappers E. Ness and Jae Millz were battling on MTV’s Making The Band. MTV also had a show called “Fight Klub,” and BET’s 106 & Park had a popular Freestyle Friday segment from 2001 to 2013.

Rappers have exposed opponents for cheating on their fiancées and poked fun at dead relatives or whether rappers’ dads turned state’s witness.

Battle rap found a new level of popularity via YouTube, and it shed light on leagues that had formed around the world. The two front-runners were Grind Time — the popular, now-defunct league that started in Florida and expanded to Los Angeles — and Smack’s own Ultimate Rap League that sprouted from his DVD series. Today, Smack battles sell out venues like New York’s Irving Plaza and the Highline Ballroom, and fans pay upward of $100 to attend.

The leagues book the battles. The rappers spend weeks preparing rhymes catered specifically to their opponents. The rappers take the stage, flanked by entourages, and perform alternating timed rounds anywhere from two to five minutes. The battles are verbal MMA fights, with rappers getting directly in each other’s faces.

While most of the rounds are pre-written, some rappers open their rounds with freestyled rebuttals to what their opponent just rapped, flipping insults in their own favor. Battlers never know what’s coming, or how personal an insult can get. When it’s a rapper’s turn to listen to his or her opponent, “defense” is employed, which is essentially how someone reacts to the person rapping — standing stone-faced, shaking a head to show disapproval or mumbling sarcastic reactions. It’s a human chess match — mentally taxing. Competitors physically train for battles and usually end up sweaty and dehydrated by the end of each contest.

“You know who your opponent is ahead of time so you can do research,” Smack said. “Did they get played? Did they get beat up? You can expose them.” Battles have gotten personal and tense, but it’s accepted, especially since the rappers are celebrities within the culture. They are revered within the battle scene but largely lead regular lives. While the most famous battlers like Loaded Lux and Murda Mook can live off of battles, making music and bookings, most battlers have day jobs. And, yes, the day jobs are function as ammo for insults. Nothing is off-limits.

Really. Dumbfoundead and Conceited once spent their whole battle exchanging short jokes and racist Asian stereotypes. Rone went viral for a whole round about Big T’s obesity. Rappers have exposed opponents for cheating on their fiancées and poked fun at dead relatives or whether rappers’ dads turned state’s witness. Despite that, you could count on one hand how many battles have turned physical.

“It’s very much like a boxing match,” says Kyle “Avocado” Gray, who has filmed and directed battles for Grind Time and URL, adding a cinematic touch to battles broadcast live on pay-per-view. “These two people get into a ring. They have to have a thick skin. They have to be ready for people to say anything, and not be fazed by it. It almost brings them closer in the end, for having been through that battle together.”

Because fans are so invested in the battles — they reach such a fever pitch — battle rap culture has become a community of message board commenters and YouTubers. Battles often refer to earlier battles and online happenings online that may sound like a totally foreign language to the novice. However, catching the references is part of what makes fans feel rewarded for their dedication.

Competitors physically train for battles and usually end up sweaty and dehydrated by the end of each contest.

“The culture is super incestual,” Gray remarked. “The art in general isn’t that welcoming to an untrained ear.” But that’s what YouTube rabbit holes are for. And celebrities are happy to join in on the fun, even if that means getting called out midround. James Harden has attended — and Kevin Durant once stood on stage, right next to Smack himself, in breathing distance of the battlers. Drake and Diddy have co-hosted, with Diddy famously putting up $10,000 of his own money midbattle to see who would win between T-Rex and Aye Verb.

There are now leagues in every corner of the globe. In addition to URL, there’s King Of The Dot (KOTD) out of Canada, England’s Don’t Flop, Atlanta’s Bullpen Battle League and all-woman Queen Of The Ring in New York. Battle rap is as popular as ever, with landmark moments happening at a breakneck pace. This year alone saw KOTD bring in Russian battle rapper Oxxxymiron, whose massive following garners tens of millions of YouTube views per battle, to Los Angeles for the most viewed battle in North American history — and counting.

And Drop The Mic does utilize writing talent of competitors from the scene like Rone and Hollow Da Don. And the satire Bodied, about battle rap, is making a splash in independent movie festivals and should see wide release in 2018. There’s also the permanent roles of rappers like Charlie Clips and Hitman Holla on Nick Cannon’s improv show Wild N’ Out.

The rapid expansion of battle rap culture is what made Smack want to take things back to the basics with Dec. 9th’s Vol. 1 event. “I didn’t want the battle culture to lose its identity,” he says. “We wanted to take it back to the essence.”