On any given Sunday, before someone takes the gridiron — or before someone suits up on an NBA court — somebody, somewhere, is listening to some BeBe Winans music. After all, his résumé — six Grammy Awards, 10 Dove Awards, four NAACP Image Awards and three Soul Train Music Awards — speaks for itself. For years, Winans, along with the music his ridiculously talented family has created for decades, has taken what we know and love about gospel music and turned it on its head, giving a contemporary twist to music that’s wholly healing.

And athletes marvel at their love of gospel music and the contributions that Winans and his family have made. As for Winans himself, he’s back with a new song, “Laughter: Just Like A Medicine,” and he recently finished a run of his play about his life, Born For This, which is on track for Broadway.

Real or fictional — who is your childhood hero?

If it was fictional, it would be Spider-Man, and my reason for that might be a weak one. I could sing you the whole theme of Spider-Man, so he would always be in my mind. Spider-Man, Spider-Man, friendly neighborhood Spider-Man! That was my hero because of the theme music. I don’t really like spiders, but he would be mine. But my real-life hero has to be my dad. And the reasons probably are a little different than others — and probably others, including some of my family members — but I’ve been saying this one thing over and over again. He used to say, ‘You can’t hurt my feelings, because I don’t have none.’ People say things, mean things, untruthful things about you, and if you don’t have thick skin — or, as my father would say, no feelings — life could crush you. I have been able to withstand some things that I think no one, you know, very few folks could deal with simply because I don’t wear those feelings.

Where does your courage come from?

My father. He was an only child, so he was just all mad. He had to protect himself, stand up for himself. He used to always tell us, ‘You’re going to know who you are before you leave my house.’ So before people start to say and make up things about who you are, you won’t believe it because you’ll already know who you are.

“I’m still old school. I still like physical CDs, and you can find them here and there. I love the experience of still going in the store.”

How do you discover new music?

I’m still old school. I still like physical CDs, and you can find them here and there. I love the experience of still going in the store. Not just to buy an album, or music, but I love people. And so I love connecting with people, having conversation with people, asking questions about the CD or other CDs that connect [us]. Before I download, if I have the time, then usually I take out time for myself. I’ll go to Best Buy.

Is there any app out there that people might be shocked to know that you love?

The Weather Channel. I know that’s boring, but weather can calm you, weather can educate you. I’m always surprised when hurricanes are on the way and warnings go out and some people decide they’re just going to stay, and I sit there and I talk to the television, and I say, ‘Why? Don’t y’all see this hurricane they’re showing you on the Weather Channel?!’ It’s one of my apps I have that I really enjoy.

Petticoat Junction. The Brady Bunch. We understood that real good. The Partridge Family.

What is it that you love about sports?

I think there’s a little secret that is kept quiet, that athletes think they’re singers and singers think they’re athletes. We think we can really play any sport. There’s a competition that goes along with that. It has to almost be conceited — confidence in what you do. I think there’s a line that goes with both athletes and musicians. My father used to say that there’s a thin line between confidence and conceit. Like your LeBrons — they’re confident, but it comes off as they’re conceited. And I think that when it comes to singers who know who they are and the talent that they have, like Whitney Houston, she was confident in her gift. And people said, ‘Oh, she’s conceited.’ Nah, she’s not conceited. Just confident. And so that’s something I admire.

That said, you’re a musician who actually is an athlete. I hear you’re quite the runner.

“I think there’s a little secret that is kept quiet, that athletes think they’re singers and singers think they’re athletes. We think we can really play any sport. There’s a competition that goes along with that.”

My running is all from Mirror mirror on the wall / who is the finest of them all? I woke up one day — long story short — and I realized I gotta lose some weight. And that was almost 27 years ago. So I made a commitment. It’s become part of my life no matter where I am, no matter what country I’m in. I get up early, I have a run, my 5 to 7 miles, do some weights and make sure I am taking care of the inner me. If you told me I would become a runner and run every day, I would tell you that you lost your mind. Beyond the physical, it is so therapeutic. I really find running a … way to really get in touch with myself … and no matter how I feel, no matter what has happened in my life, I still do my exercise, which teaches me no matter what storm you’re going through, you can still make it. Just get up and do it. So [now] I encourage people, through my Instagram and everything else, let’s take care of ourselves. Sometimes when you’re in mile 1 … mile 1 is a hard mile. I don’t care who you are, but when you get to mile 4, you’re like, ‘I got this.’ And then I tell myself, ‘I wish I could feel the power of mile 4 in mile 1, but that ain’t going to happen.’ You gotta go through mile 1, 2, 3, to get to 4.

What’s your favorite kind of music to run to?

I’m listening to old school, I’m listening to [Edwin] Hawkins, I’m listening to Andraé Crouch, I’m listening to The Clark Sisters. Today, I happen to get stuck on one song … called ‘Hallelujah.’ I ran the rest of my miles on that song. Just kept going back, going back [to it]. I ran about 4 miles, and one song got me through. Just music that is inspiring. I like upbeat songs, especially before you get to mile 4. But there are times that I don’t listen to anything. The silence is speaking to me.

Who are some of your favorite athletes?

I think music has a way of introducing people that you probably would never be able to talk to. I probably never will forget the day I met Michael Jordan. They [Chicago Bulls] were in town, and we were coming back from somewhere. And we were at the airport and I saw Michael Jordan sitting out with earphones on, and I said, ‘Oh, I gotta go meet him. I want them to lose! But I gotta go meet him.’ I got close, and he looked up and he saw me. He put the earphones in his pocket and he said, ‘Put your head down.’ I said, ‘What?!’ He says, ‘Put your head down.’ Put my head down? So I tried to put my head down. He took his earphones and he put it on my ear, and he was listening to my album. I was like, ‘OK, so tonight I want y’all to win …’

“I probably never will forget the day I met Michael Jordan.”

You switched loyalties and didn’t root for the Pistons that night?

Heck, yeah, I switched that night! He’s Michael Jordan! I know a lot of the old school. Chris Bosh, he called me from Japan or somewhere, and I met LeBron. I don’t go as much as I used to go, so I cheer all these people on from a box [seat]. I am looking forward to meeting that kid, [Stephen] Curry. And a couple others I know listen to my music, but I haven’t had a chance to meet them.

What’s the first concert you ever went to?

What was the last concert you went to?

Dawn Staley diary: Starting back at one Read now 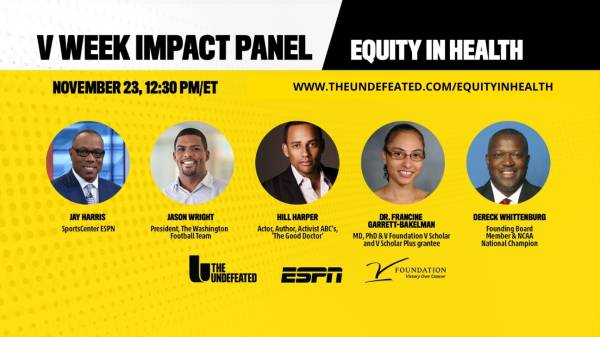 Equity in Health impact panel presented by The Undefeated, ESPN and the V Foundation for Cancer Research Read now

What is something that you will always be a champion of?

It will always be young people. I said it earlier, I really do love people. Sometimes there are people who are in front of the camera and will say that they are really not people persons, and I just like people. Now, I’ve learned to be cautious, but I still love people, and young people are our future. But beyond our future, they are our canvases. And we can … open doors for them to use their gift, and to encourage them to dream bigger. Their hearts are not stone yet, and so I like to pour [what I have] into young people, I really do. Some people say you wanna stay young. I’m not necessarily a believer of that because I think what comes with age is wisdom, and so I want more wisdom. I don’t mind getting older, and then taking that wisdom and pouring it into young people.