Before the Texans’ game on Thanksgiving Day, the star quarterback will wear a special jersey to honor the late Houston native

Ahead of the Houston Texans’ Thanksgiving Day road game against the Detroit Lions, quarterback Deshaun Watson will arrive at Ford Field with a football jersey unlike the ones he typically wears on Sundays.

Instead of “Texans,” the jersey will read “Yates” in block lettering across the chest, representing Yates High School in the 3rd Ward of Houston, seven miles from the home stadium of the city’s NFL franchise. Stitched above the school name is a patch with the initials “GF,” paying homage to former Yates football player and 1993 graduate George Floyd, who was killed while in the custody of Minneapolis police six months ago. Inside the collar of the jersey is the word “Breathe,” a callout to the phrase, “I can’t breathe,” that Floyd told officers more than 20 times before his life ended.

In early November, Watson teamed up with Nike and the Floyd family to provide new uniforms, highlighted by the custom-designed jersey, to the Yates football team in honor of the man whose tragic killing was felt throughout Houston and the world, as the ongoing fight against racial injustice and police violence continues.

Nike, the sportswear company that Watson signed an endorsement deal with in 2017 before the Texans drafted him, approached the signal-caller about supporting the student-athletes at Floyd’s alma mater. And Watson, who signed a four-year, $160 million contract extension in September to remain in Houston with the second-largest contract in NFL history, committed to helping.

On Thursday, Nike released a five-minute film featuring Watson, Floyd’s nephew Brandon Williams and football players from Yates, as part of its Stronger Than One docuseries, which depicts NFL athletes using the brand to give back to their local communities while advancing the conversation of social justice and equality.

“As someone that cares about these important issues and using my voice to inspire change, collaborating with Nike has given me the platform and resources to make a difference for these young kids,” Watson told The Undefeated via email. “If I can make a positive impression on just one kid, I’m making a difference.”

Floyd’s death in late May hit home for the 25-year-old Watson, who plays in the city where the late 46-year-old Floyd grew up. A week after Floyd died as a result of a white police officer kneeling on his neck for nearly eight minutes, Watson marched with the Floyd family through downtown Houston in peaceful protest. A few days later, he appeared in a video with fellow NFL players calling on the league to condemn racism. “I am Frank Smart,” Watson said in the video as a tribute to the 39-year-old Black man who died in 2015 from a seizure after being physically restrained in a Pittsburgh jail.

And on opening night of the NFL season in September, Watson and Kansas City Chiefs quarterback Patrick Mahomes, the highest-paid player in league history, locked arms on the field as part of a joint demonstration they led in protest of racial injustice. 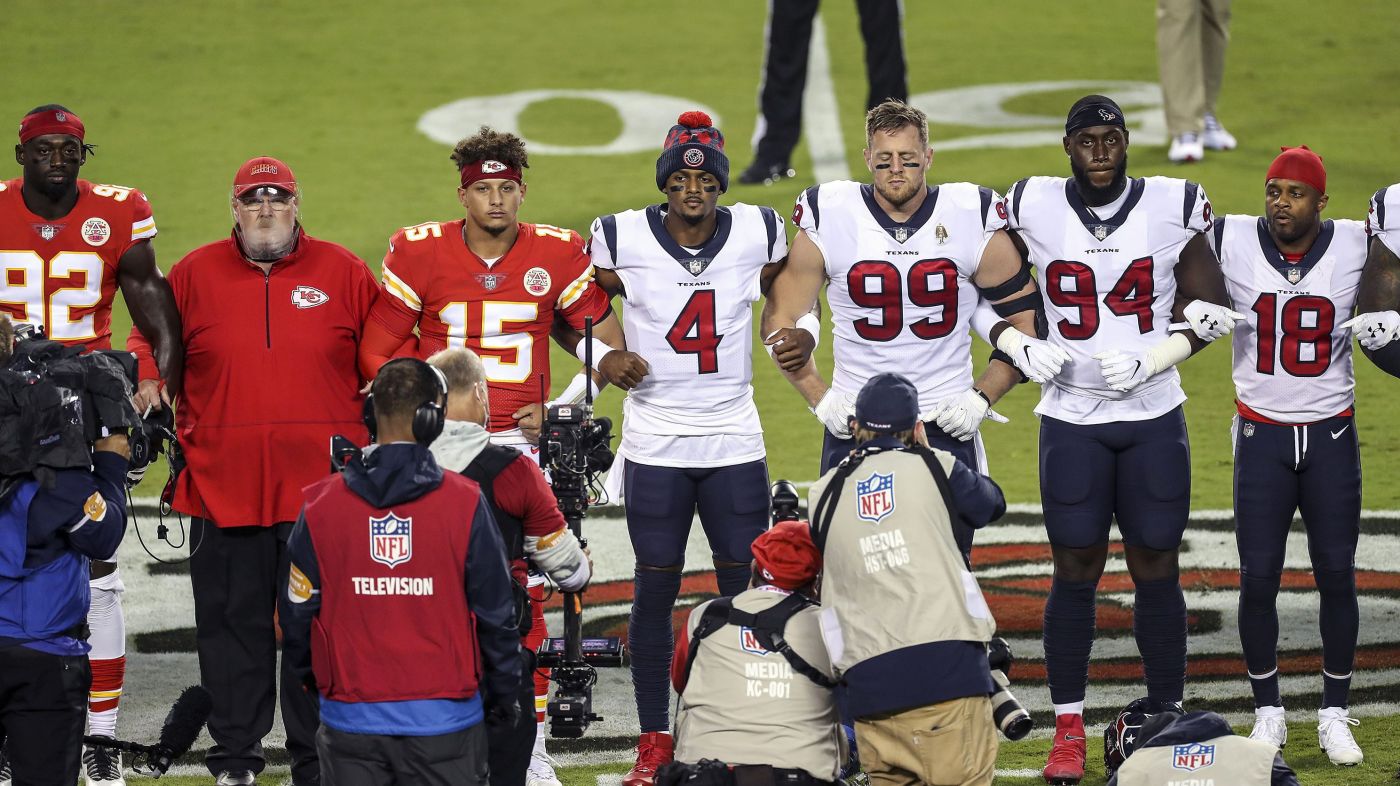 In the NFL, expect protesting and booing to continue: ‘It shows exactly where we’re at’ Read now

“[George Floyd’s murder has] affected me in many ways,” Watson wrote The Undefeated. “As a Black professional athlete, I’ve been empowered more than ever to leverage my voice to further the conversation around systematic racism and social injustice within our communities. As athletes, we have the power to create real lasting change when it comes to this conversation and that’s why I will continue to speak out and stand up in support of this movement.”

Shortly after Floyd’s death, Nike committed $40 million over the next four years, stating in a pledge to support “organizations that put social justice, education and addressing racial inequality in America at the center of their work.”

Nike tapped Watson to lead the charge in Houston, beginning with a collaboration between the Texans quarterback and the Floyd family to support Yates High School. According to Nike, Watson and the family both had input in the design of the new uniforms that were made exclusively for the school Floyd attended, and the team he played for in a state championship in 1993.

“More than anything, this gives us hope,” Williams, Floyd’s nephew, said in a statement to The Undefeated. “Everybody out here in the community has the common goal of wanting to be better, and to do better. It means so much to see everybody standing up for what they believe in.”

Yates students debuted the uniforms on the football field during a 54-0 win in the team’s final game of the regular season on Nov. 5. Incorporated into the design of the uniform is the word “Brotherhood” on the back of every jersey in place of player names.

Kamara for the culture Read now

“It just helps our kids understand and our community understands that we matter,” Yates head football coach Michael Hickey, who was high school teammates with Floyd in the early ’90s, told The Houston Chronicle. “Inner-city schools matter. Inner-city football matters. I think it was well-deserved for the kids and the community, and we are forever grateful for this.”

Before the Yates football team was presented with the uniforms, Watson unveiled them in a surprise video that was shown to players on the team bus. The NFL star got his own version of the jersey, which he plans to wear during pregame on Thanksgiving. But it meant even more to Watson to share the uniform with the youths of the city he now calls home, as they all continue to extend Floyd’s legacy on and off the field.

“These young guys are from an area of Houston where football is their outlet for dealing with life off the field,” Watson wrote. “They push themselves to be the best and do better every time they suit up for practice or a game, and the jersey is a reminder that we have to keep fighting for that advantage. The jersey is meant to be a constant reminder that we’re in this together.”