The ‘Breds’ have a special place in sneaker culture and basketball history — now, they’re back for a retro release

Scottie Pippen wandered in awe. Phil Jackson embraced the tie-dye-haired Dennis Rodman. And Ahmad Rashad, microphone in hand, searched the celebratory abyss for the man of the hour: Michael Jordan.

But Jordan wasn’t to be found on the court shortly after the Chicago Bulls defeated the Seattle SuperSonics 87-75 in Game 6 of the 1996 NBA Finals to claim their fourth title in six years. Jordan had left the United Center’s hardwood floor, made his way through the arena tunnel and settled in Chicago’s locker room.

“Michael came in by himself, laid on the floor and started crying,” recalled Barry Gossage, one of the first photographers inside the locker room after the Bulls won.

It was June 16, 1996 — two years and eight months after Jordan announced his first retirement from the NBA, which he spent pursuing a career in Major League Baseball. Following a 17-month hiatus from basketball, Jordan returned to the Bulls in March 1995, just in time for the playoffs. Chicago lost in the Eastern Conference semifinals that year, but responded with a historic 72-10 record during the 1995-96 regular season that culminated in the team beginning its second three-peat that decade.

Jordan once again reached the mountaintop, but this time in bittersweet fashion. The Bulls clinched the ’96 Finals on Father’s Day, nearly three years after Jordan’s dad, James R. Jordan Sr., was tragically murdered. For the first time in his life, Jordan — who became just the second player in NBA history after Willis Reed in 1970 to be named the MVP of the All-Star Game, regular season and Finals in the same year — partook in a championship celebration without his father.

The live NBC broadcast cut to Jordan sprawled across the locker room floor. His championship hat had fallen off his head, yet he still clinched the game ball he snatched from teammate Toni Kukoč at the buzzer. After 37 seconds of footage displayed a choked-up Jordan, the cameraman capturing the video was escorted out of the room. Gossage, still inside, hesitated at first, but lifted his camera and snapped a few photos.

“I only shot two or three frames and kind of just let him be. When I saw how emotional he was, I let him have his moment,” said Gossage, now the team photographer for the Phoenix Suns. “He just wanted to be by himself. I was just lucky enough to be there … I was the only one who got that photo.”

It’s an image that’s especially revered in sneaker culture. On Jordan’s feet in the picture is a pair of his iconic black, red and white signature Air Jordan 11s, known as the “Breds.” Jordan rocked the shoes exclusively during ’96 playoffs, and the night the Bulls won the title marked the final time His Airness laced them up in an NBA game. Now — appropriately, 23 years later — the “Bred” Air Jordan 11s are back.

On Thursday, the Jordan Brand delivered the shoes, via a surprise drop (with another widespread release scheduled for Dec. 14), for just the fifth time in history, dating back to retro releases in 2012, 2008 and 2001, following the initial release in 1996. Most notably, for the first time since they debuted, the Bred 11s are set to return in true OG form, down to the same box the kicks came in when Jordan wore them during his emotional and ultimately redemptive title run through the ’96 Finals.

“The shoe brings back memories,” Gentry Humphrey, vice president of Jordan Footwear, told The Undefeated, “of the NBA Finals, the NBA playoffs, and MJ — in the peak of his career.” 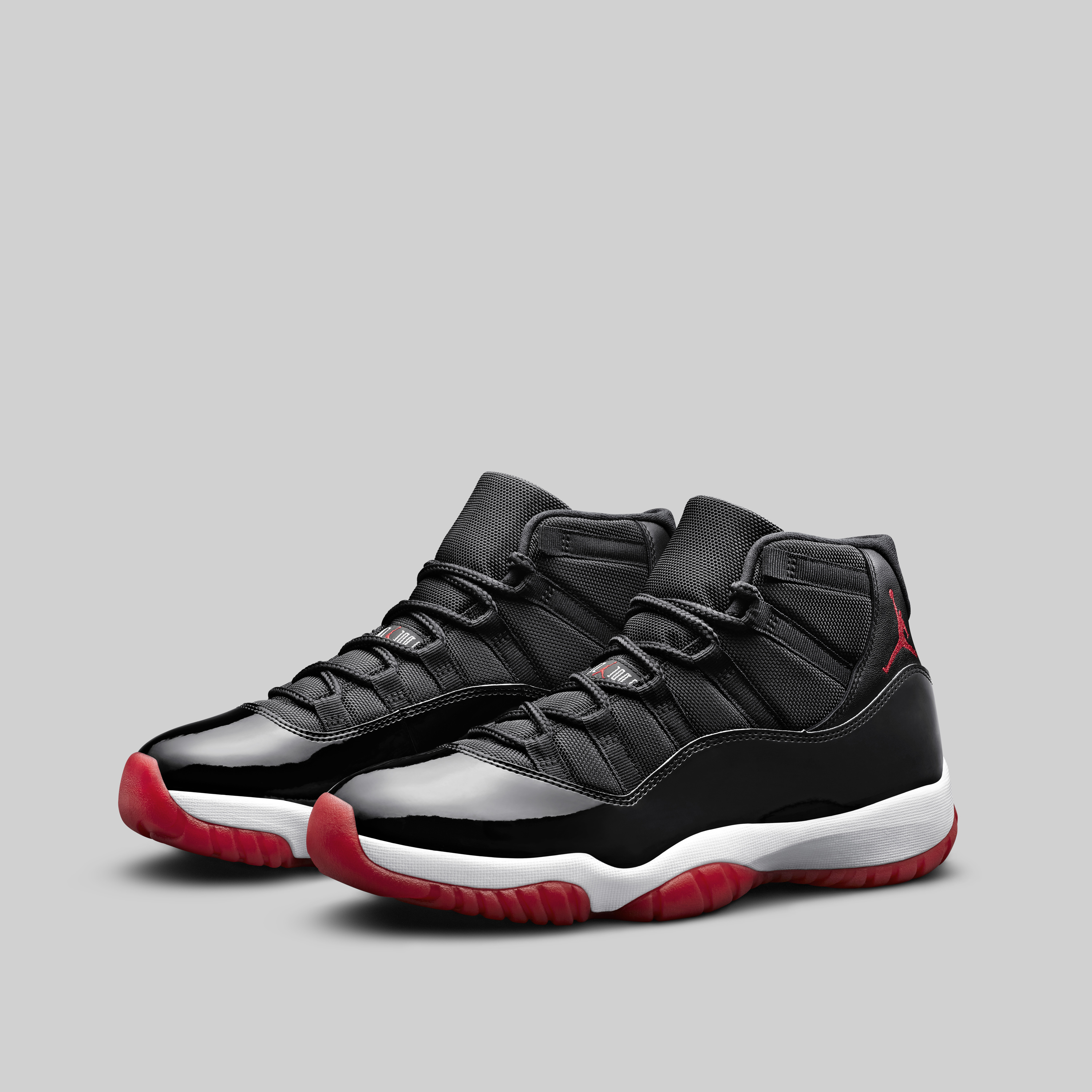 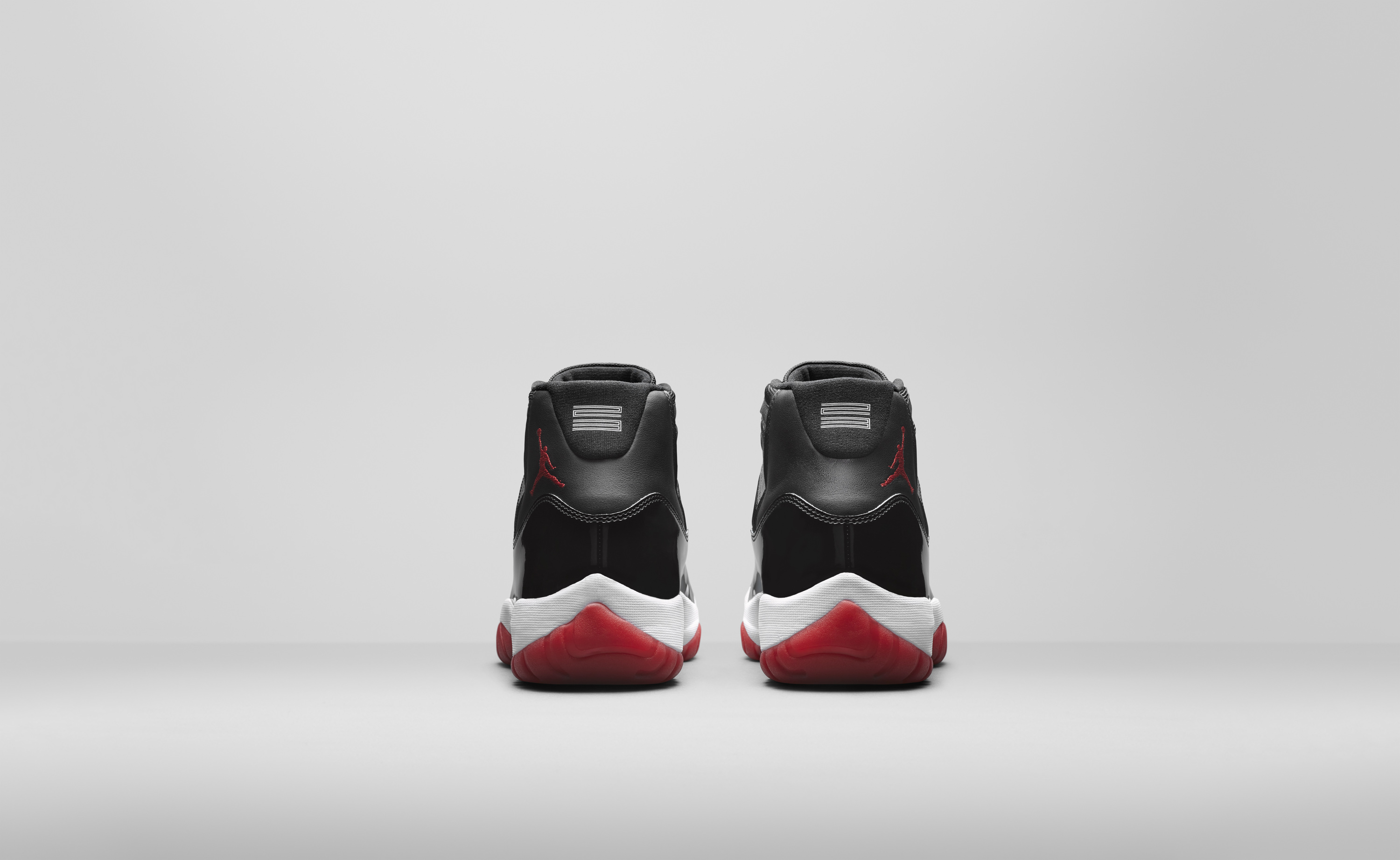 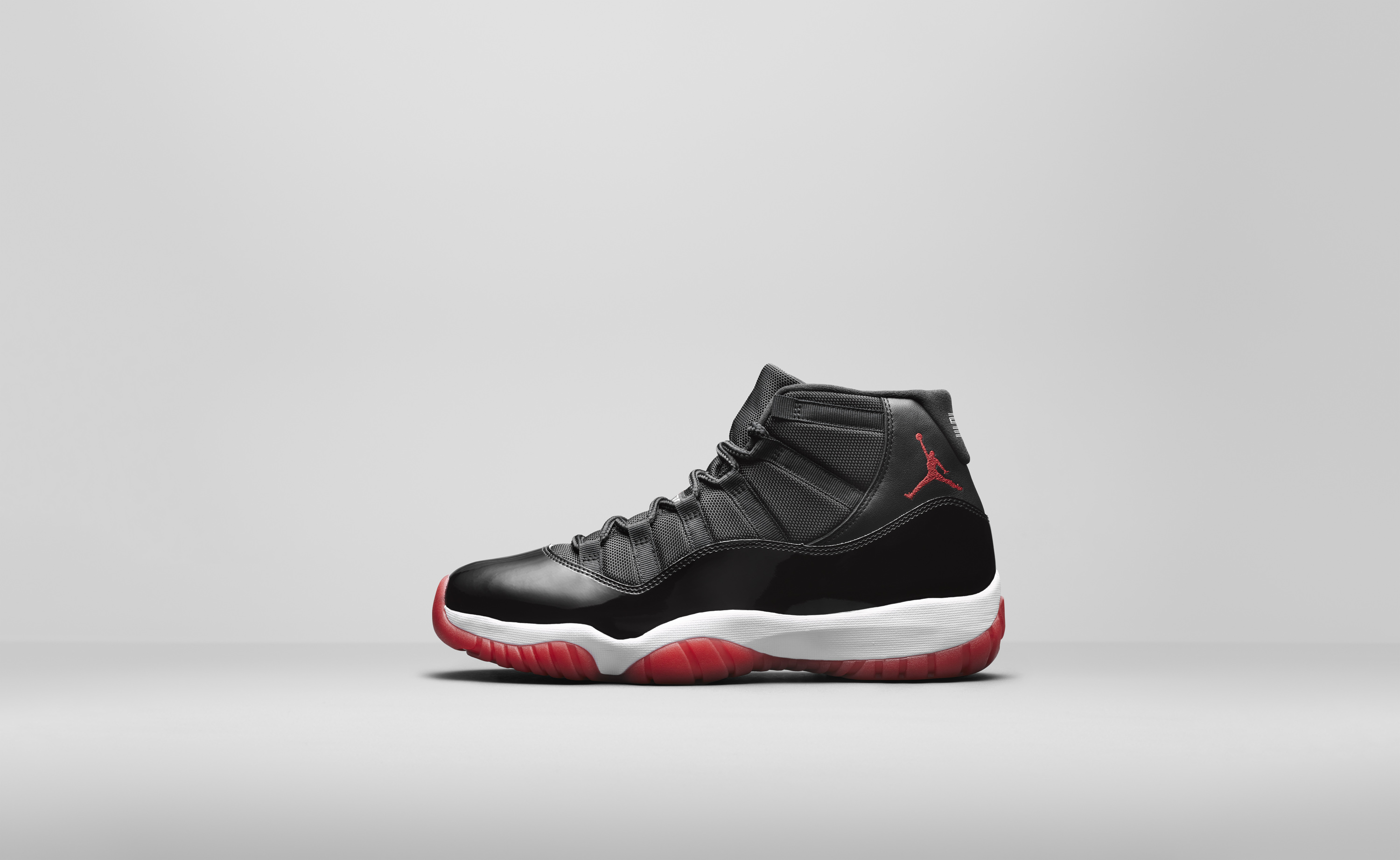 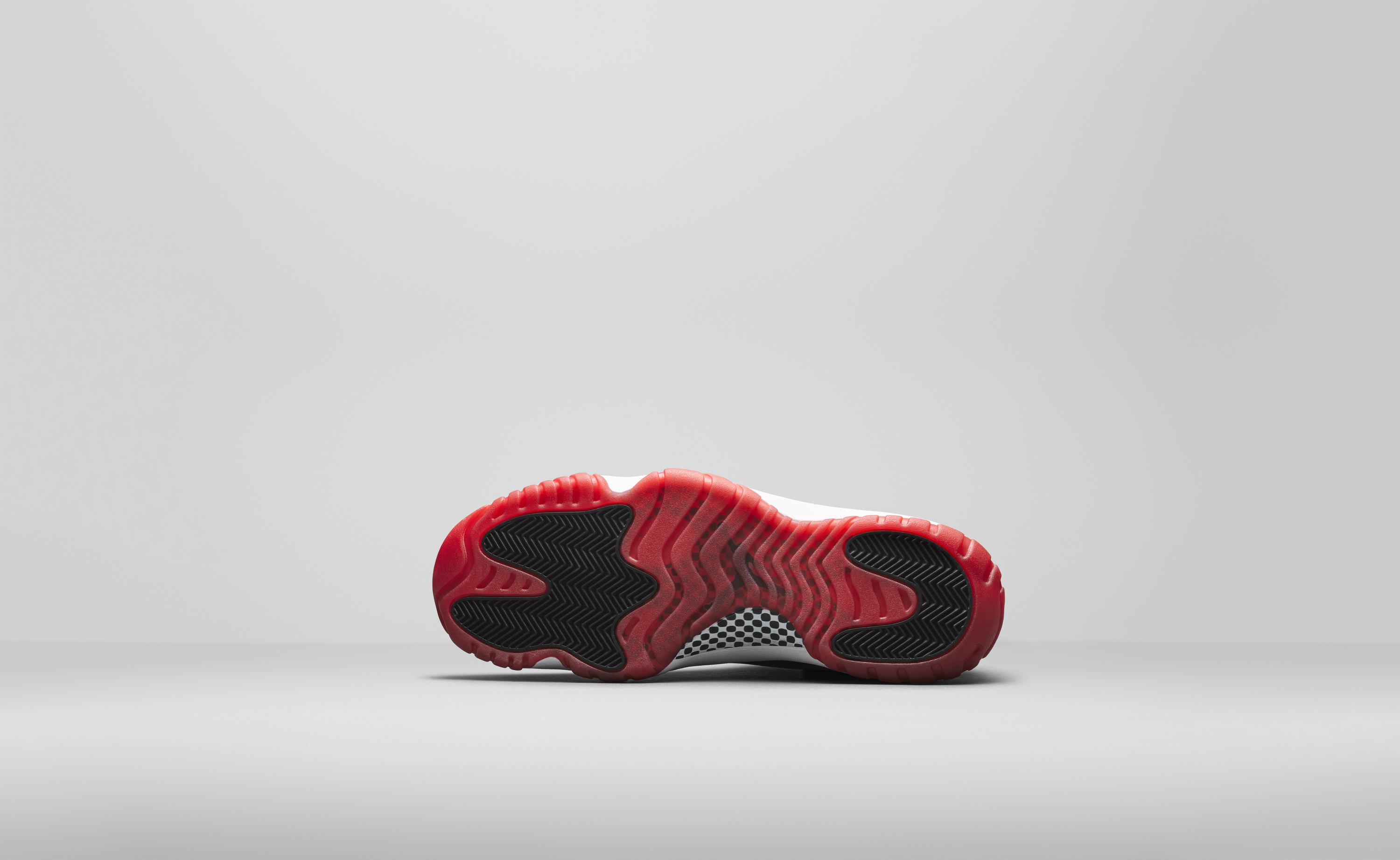 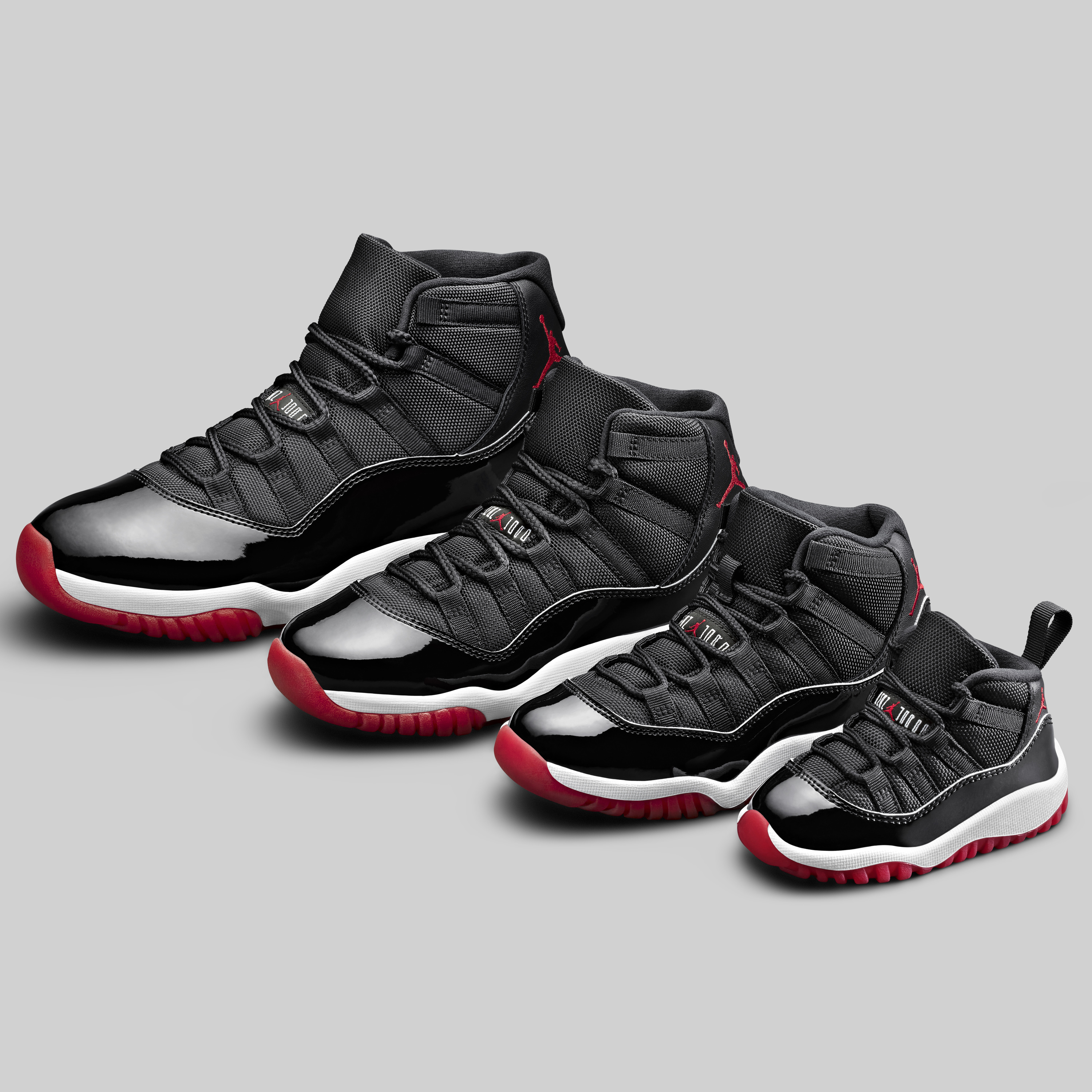 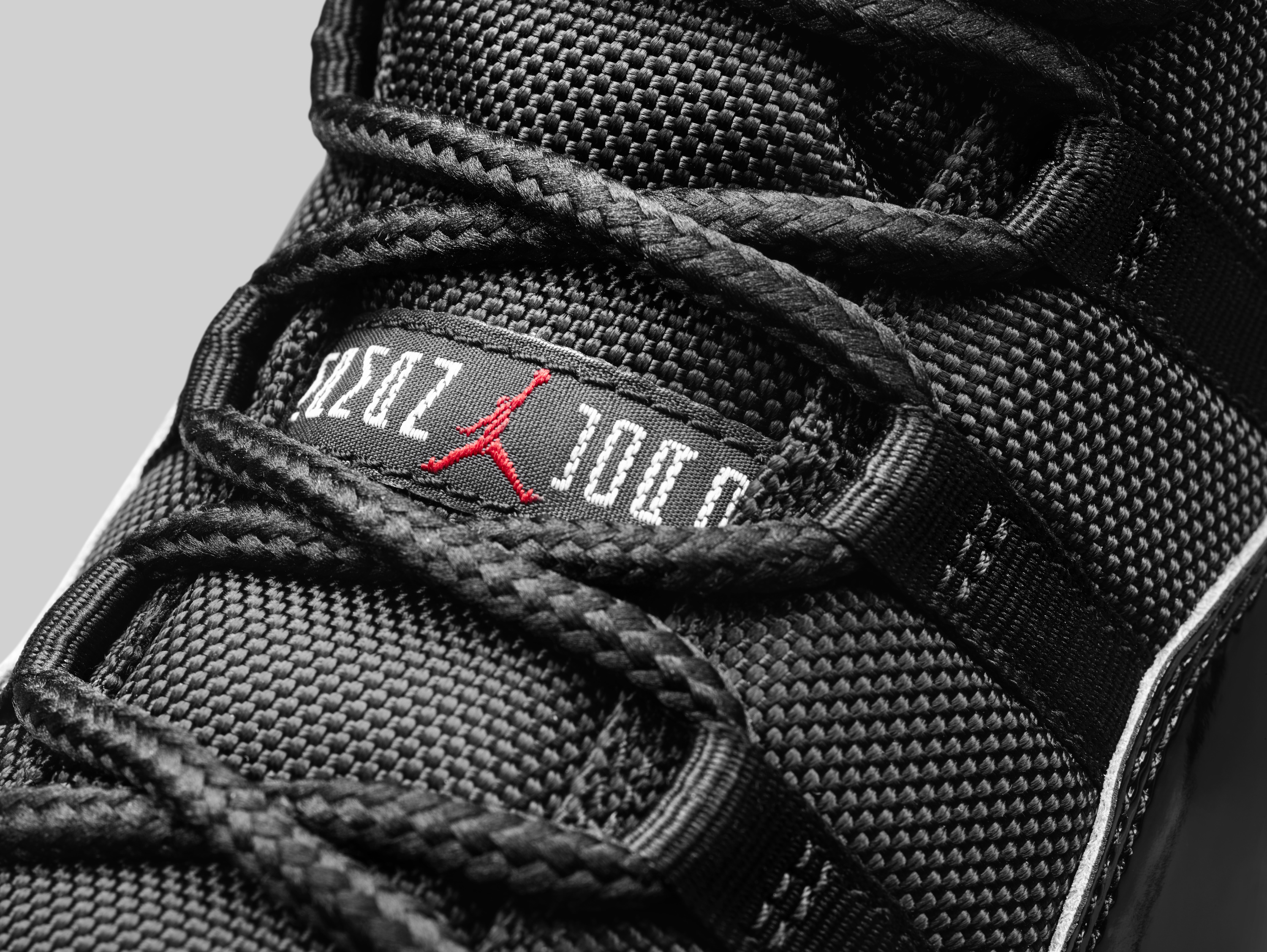 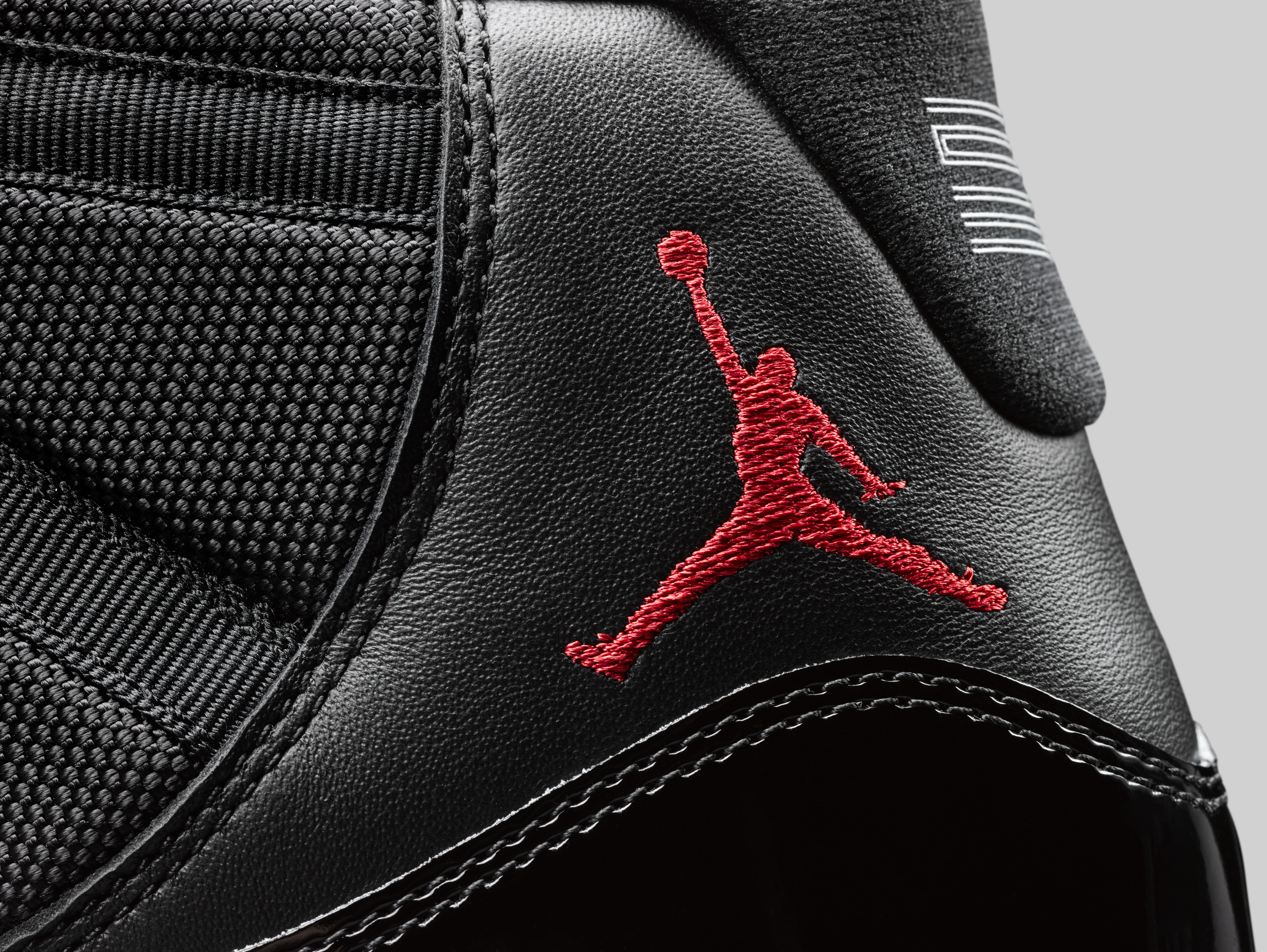 Before the Bred Air Jordan 11s first hit stores on March 22, 1996, a sporting goods store in Memphis, Tennessee, received 200 phone calls a day inquiring about Jordan’s new sneakers, according to a story published in The Commercial Appeal.

Almost a year had passed since Jordan debuted the Air Jordan 11 silhouette — the first basketball shoe to incorporate patent leather — in a white and black colorway with subtle purple accents, dubbed the “Concords.” In February 1996, during the NBA All-Star Game in San Antonio, Jordan introduced a new colorway of the 11s called the “Columbias” — another predominantly white shoe with an icy Carolina blue sole.

But the Breds resonated differently. “This all-black number with patent leather and a fiery red sole isn’t just any Air Jordan,” reads an April 1996 report from The News & Observer in Jordan’s home state of North Carolina. “Area retailers say it is the best-selling shoe they’ve ever carried.”

The sneakers, listed at a retail price of $124.99 a pair plus tax, sold out at a Champs Sports store in Charlotte, North Carolina, in 40 minutes. Chicago’s Niketown store ran out of stock in five minutes. Even in Toledo, Ohio, young kids hunting for the Breds “hovered impatiently outside locked mall doors — cash and credit cards in hand — at 8 a.m., two hours before the mall’s usual opening time,” according to a Toledo Blade story.

Ray Allen, then a 20-year-old junior at the University of Connecticut, can’t forget the first time he saw the Breds.

“I just remember thinking how I was going to wear the shoes out to the club after I hopped in them,” Allen, a 2018 Hall of Fame inductee, told The Undefeated. He was drafted three months after the shoe dropped, and during his rookie NBA season became the first player to sign an endorsement deal with what ultimately became the Jordan Brand. “The Bred AJ11 is a standout shoe,” Allen continued. “The colorway alone brings back memories of the original AJ1 and is a nod to the beginning of sneaker culture in the NBA and basketball.”

The crazy thing is, folks went bananas for the Bred 11s before Jordan even wore them in a single game. He didn’t break the shoes out for the first time until April 26, 1996 — Game 1 of a first-round NBA playoffs series between the Chicago Bulls and Miami Heat.

“The memories flooding back of MJ debuting the AJ11 Bred during the NBA playoffs in 1996 really represents what is so special about this shoe,” Allen said. “To be able to remember exactly what I was doing and what was happening when the shoe was debuted on-court is a huge tribute to the impact and legacy of MJ and the shoe itself.”

There was actually a method behind the madness of Jordan’s long wait to debut the Breds. Before the playoff opener against the Heat, he approached Bulls head coach Phil Jackson with an idea. Jordan wanted every player on the team to begin Chicago’s championship chase wearing black socks and shoes. Jackson obliged.

“MJ preferred to wear black-based shoes at playoff time as he knew his focus would need to be a little more menacing,” said Humphrey, who tuned in the night the Bulls came out in all-black everything on their feet. “It had a similar shock and awe to when the Fab Five debuted black socks and black shoes. The entire team wore them but MJ himself, his shoes stood out because of pops of white and red. …

“I also remember that it was a long night for Rex Chapman, who had to guard MJ.”

Chapman and Jordan had become quite familiar with each other over the years. Back when the shooting guard for the Heat was a senior in high school, he received a call from the young Bulls star, at the request of legendary University of North Carolina coach Dean Smith, trying to persuade Chapman to sign with the Tar Heels. After playing two seasons at the University of Kentucky, Chapman entered the NBA in 1988 and shared the same agent, David Falk, with Jordan — by the mid-’90s, Chapman was also a Nike athlete.

During the ’95-96 NBA regular season, Chapman helped the Heat hand the virtually unbeatable Bulls one of its 10 losses. In that game — a 113-104 Miami win over Chicago on Feb. 23, 1996 — Chapman dropped 39 points on Jordan. But the playoffs two months later proved to be a different story.

“I had Michael’s full attention,” Chapman, now a broadcaster and Twitter personality, told The Undefeated about the night MJ debuted the Breds, which also marked Chapman’s first career playoff game. “He’s already way better than everybody. He’s already the most beautiful-looking athlete on the planet and now he’s got the dopest shoes of all time? C’mon.”

Jordan dropped 35 points on Chapman and the Heat that night, and went on to play in the Bred 11s in all 18 of Chicago’s games during the ’96 playoffs, averaging 30.7 points, 4.9 rebounds and 4.1 assists. In Game 6 of the Finals against the Sonics, his last performance in the sneakers, Jordan scored a team-high 22 points while adding nine rebounds and seven assists. He was truly worthy of the game ball he held onto for dear life when Gossage immortalized Jordan’s moment of raw emotion — and those heralded shoes — on camera.

Longtime NBA photographer Andy Bernstein (now the director of photography for the Staples Center) also captured a memorable photo of the Breds during the postgame Finals festivities. After Jordan’s teammates, coaches and family joined him in the locker room, where champagne and cigars circulated, he unlaced his sneakers and continued the celebration.

Berstein took a picture of Jordan with his 5-year-old son Marcus and 7-year-old son Jeffrey. Surrounding them were pairs of MJ’s “Bred” Air Jordan 11s — the sneakers that every kid once wanted, and soon will be after again.

“It seemed like Michael was trying to save the shoes for some reason,” Bernstein said. “Who knows? Maybe he was superconscious of the importance of them.”