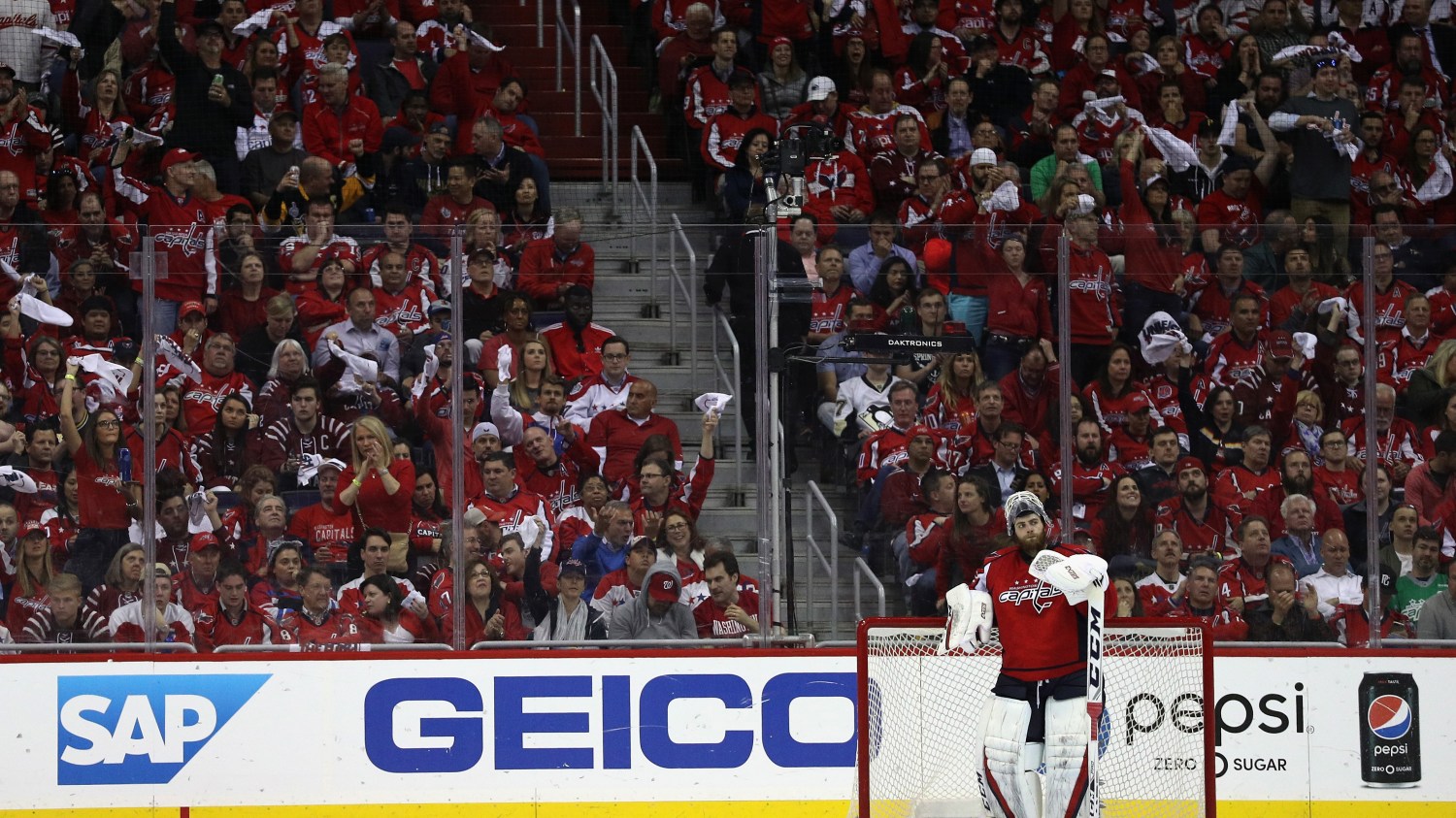 Goalie Braden Holtby #70 of the Washington Capitals looks on after giving up a third period goal against the Pittsburgh Penguins in Game Seven of the Eastern Conference Second Round during the 2017 NHL Stanley Cup Playoffs at Verizon Center on May 10, 2017 in Washington, DC. Patrick Smith/Getty Images

Being a D.C. sports fan on the city’s biggest night of the year

Once again, fans are put through another painful episode of ‘Groundhog Day’

By Rhiannon Walker @InstantRHIplay
May 11, 2017

For 25 years, Washington, D.C., sports fans have felt like the odds never seem to be in their favor. Case in point, these fans found themselves in a situation where their beloved Nationals, Capitals and Wizards were all playing on the same day and all starting within an hour (7:05 p.m., 7:30 p.m. and 8 p.m.) of one another.

If that wasn’t stressful enough, here’s what was on the line Wednesday night:

You get the picture — it was a big night for D.C. sports fans. But who exactly hurt these folks so bad that they were anxious a whole 12 (possibly 24) hours ahead of game time? Well, their favorite teams. The last team to bring home the chip was the Washington football team in 1992. But since then, there has been no new hardware among the Major Four.

Since the Capitals were swept by the Detroit Red Wings in their only Stanley Cup finals appearance in 1998, the team has had 18 seasons to get back to the championship series. They missed the playoffs six times and have played in six quarterfinals and six semifinals. The 2004-05 season was wiped out by the lockout.

In the past two seasons, the Capitals won the Presidents’ Trophy, awarded to the team with the best-regular season record, only to be knocked out in the semifinals. Caps fans fear Alex Ovechkin, one of the best players to ever grace the ice, will go into the Hall of Fame having never led a team to the conference championship.

The Wizards lost in the first round 10 times in the past 38 years. Five times during that period, the exit occurred in the second round, and in the other 23 years the team didn’t qualify for the postseason. While the villain has been different each of the past two times the Wiz were knocked out (Indiana Pacers and Atlanta Hawks), the results were similar. Washington needs a victory in Friday’s Game 6 to avoid losing its third straight semifinal series 4-2.

And whenever the Nationals have the best record in baseball (which is essentially every other year), they get knocked out of the playoffs in the first round, typically pushing the games to do-or-die, like the Capitals.

One of the worst episodes in D.C. sports history has to be the 2012 NL Division Series, when the Nationals welcomed the St. Louis Cardinals for Game 5. Any sports fan’s stomach would have fallen to the floor witnessing the Nationals give up a 7-3 lead — at home — in the top of the seventh. Leading 7-5 with two outs and a full count against Yadier Molina, Drew Storen walked him in the ninth inning. Back-to-back singles helped put the Cardinals ahead to stay, 9-7.

Going into Wednesday, the team from Charm City held a 2-0 series lead, beating the Nats in back-to-back games at Camden Yards. The Birds traveled down I-95 and were on the verge of going for the three-peat until Matt “Hello, darkness, my old friend” Wieters hit a two-run single in the bottom of the ninth against his former squad.

So Washington didn’t strike out completely — pun absolutely intended — Wednesday night. But, being realistic: A regular-season win on a night in which both of the teams playing in the postseason lost just doesn’t stack up.

A whole generation of fans in this city has never experienced a championship team. And it’s hard to see people be so jaded, so young. But going into a night like Wednesday, anything was possible, and even the most bitter D.C. sports fan allowed a ray of optimism to peek in.

There’s like a 98% chance the Verizon Center burns down on Wednesday night, regardless of the result

Take it from a Maryland fan: Burning things doesn’t really pan out all that great — especially if you need said burned-down venue for the other playoff team in town. Yeah, you really want to save that excitement for later in the postseason.

Pulling for my @Capitals in tomorrow night's game 7! Can they do it? I say yes!

If you believe in talking things into existence, then D.C. sports fans were doing a pretty good job of it Tuesday leading into the games. You may also subscribe to expecting the worse and hoping for the best, so the sting of defeat isn’t so great or so the satisfaction of victory remains pure. There’s no one right way to deal with your expectations for your team.

That time you were asked to design a sports troll. pic.twitter.com/cEUovGcj7v

Today's cover: With Caps' Game 7, Wizards' crucial Game 5 and the Nats playing the Orioles, this could be D.C.’s biggest sports night ever. pic.twitter.com/13WGRGwcUl

Washington's drought of 66 seasons since a pro team reached final four in its league is by far the longest active. #Caps can end it tonight.

This may be the biggest night in D.C. Sports history

I wish I could fast forward 10 hours man https://t.co/PyppSwOBKr

It's not even noon and my anxiety about D.C. sports tonight is off the charts.

You could cut the tension in the proverbial social media air with a butcher knife if you felt so inclined.

The last time the #DCSports trifecta happened on the same Wednesday 🙏🏼 pic.twitter.com/veC5JAOhlr

On that note, Stephen Strasburg was wearing a Capitals sweatshirt in the clubhouse before his start tonight.

A prayer circle was formed by the professional and collegiate teams in the area to send well wishes and good vibes.

Since '98 Stanley Cup Finals, the Caps/Nats/Wiz/Skins have been in final eight of their leagues 13 times. They're 0-13 in advancing.

Game 5 gonna be a good one

#Caps & #Wizards losing. Can we please just have 1 team or 1 year #DCSports? Please?

Season? Ovechkin's legacy is on the line. https://t.co/1yMEfH2wxx

The only team in the #DCTrifecta to win tonight was the Nats…in a meaningless May game.

All you can do is laugh at that…#DCSports

Sports will never make me happy when it counts. Ever.

update: it was not. sorry everyone pic.twitter.com/lwaoYSxrfX

#Caps headline: Out of excuses, out of answers

Second Wednesday in May, 2015:
Caps season ends in game 7
Wiz, tied 2-2, drop game 5 on the road
Nats come from behind to win in 9th pic.twitter.com/LGbHByVvx5

Scott Van Pelt opens his show: "I am sick and tired… sick and freakin' tired of this same routine with the Caps." https://t.co/f3NgOL7bZq

Unfortunately for D.C. sports fans, the day after has not proved to be any better. As they are well aware, to the winner goes the spoils, and in this case the winner is social media, which is simply ruthless in situations like these.

BREAKING NEWS: Mario Lemieux has been named owner of the Washington Capitals and the Pittsburgh Penguins.

don’t feel too bad, DC. the Capitals could have made it to the Super Bowl and blown a 28-3 lead

"The team honestly makes me drink."
We asked @Capitals fans how they felt after (another) Game 7 loss to the Penguins. It was… interesting pic.twitter.com/Wn3UI7f5RE

Capitals fans in one Gif every year pic.twitter.com/NrUBNLua4n

The celebratory #Capitals donuts we bought to hand out this am are now consolation donuts – share the sadness w/@MikeTFox5 @HollyLiveFox5DC pic.twitter.com/vEcCaTJQlY

So Wizards got blown out and have to play 2 elimination games.

And today is cold and rainy. Cool. #DCSports

Caps..Wizards…Nationals. Here in the DMV, we live in the Valley of Just Good Enough to Rip Out Your Scorched Graveyard of a Heart. Again.

You can't just be DeathRowDC at home. You gotta take that on the road. This game was truly horrible!!

Bases loaded?
Bottom of the 9th?
Take it away Matt Wieters… pic.twitter.com/ZfVdTWZJ2K