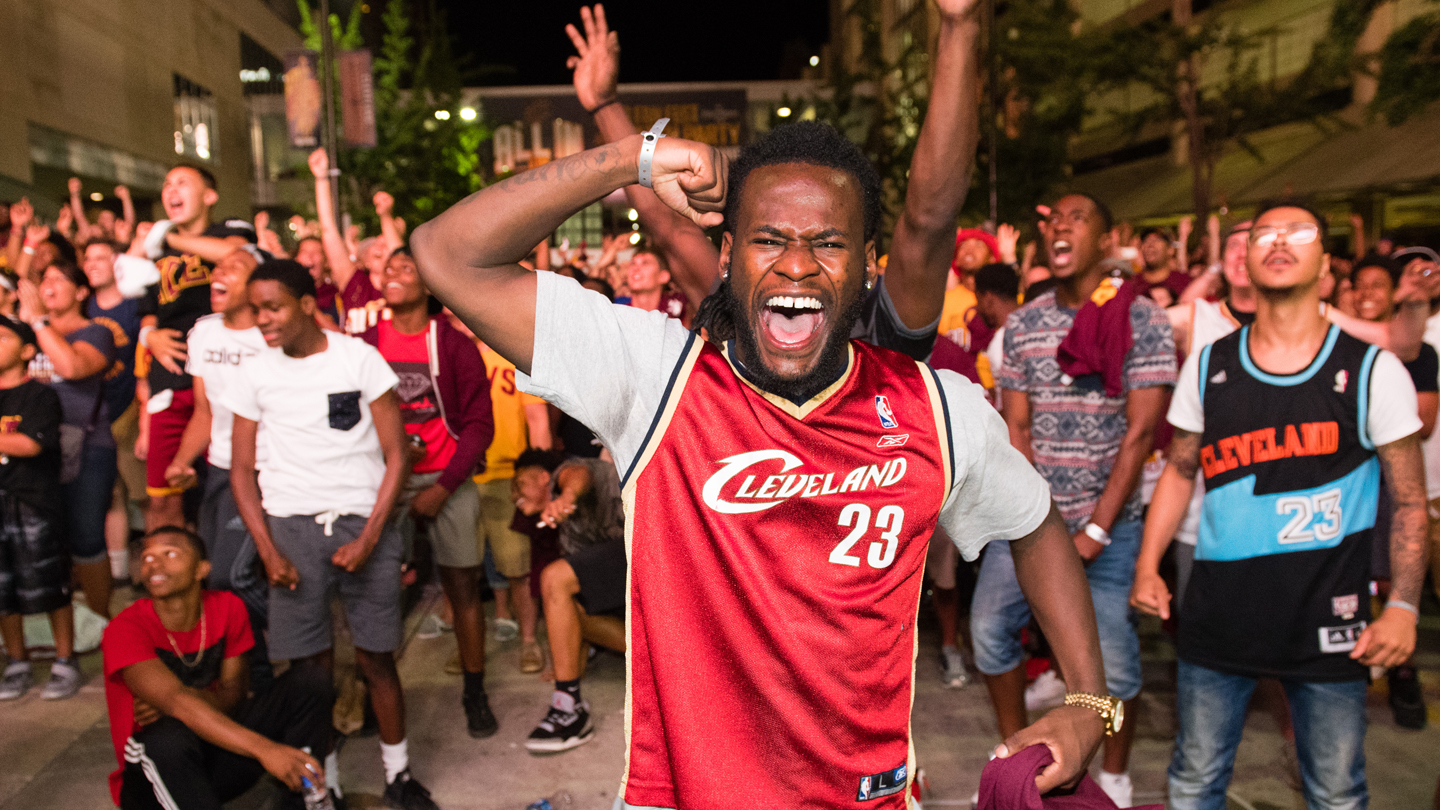 Skeets Sports Bar sits on the East Side of Cleveland in a working-class neighborhood that is three blocks from Luke Easter Park – named after the former Negro League and Major League Baseball first baseman. Skeets is also three blocks south of the former music studio of LeVert, the R&B group led by Gerald LeVert, son of Eddie LeVert of the O’Jays. The bar also neighbors Mount Pleasant, an area that housed some of Cleveland’s greatest NFL stars, including Marion Motley and Hall of Famer Jim Brown.

Skeets, owned by Charles Rogers, is the routine stop in this community when it comes to sports, line-dancing and some of the best soul food and barbecue in Cleveland. This is especially the meeting place on Sunday during football season. Skeets is famous for its seasonal bus trips to Pittsburgh, when two busloads of patrons follow the Cleveland Browns.

Watching the Cleveland Indians and Cleveland Cavaliers also ranks high among the mostly 35-and-older crowd, and they were packed in there last night when the Cavs defeated the Golden State Warriors 93-89 in Game 7 of the NBA Finals to bring a major professional sports championship to this city for the first time in 52 years. The awful drought is now over.

Sunday night, Skeets bar fans wore various Cavaliers’ T-shirts with the phrase “All In.” But because of the city’s often miserable sports past, doubt set in among many in the crowd when the Cavaliers fell behind briefly in fourth quarter. That all changed when Kyrie Irving nailed a late 3-pointer to snap the tie. And once the clock hit zero, pandemonium broke loose on both sides of the sports bar with hugs and shouts. The excitement was so overwhelming that the party spilled into the street as patrons danced with strangers, including members of the motorcycle club next door.

Rogers, who lived through all of the previous negative titles associated with Cleveland’s sports teams, was nearly powerless with joy as he wiped away his tears.

Until Sunday, the last time Rogers witnessed the exhilaration was when he was in elementary school, when the Cleveland Browns defeated the Baltimore Colts on Dec. 27, 1964, in Cleveland’s Municipal Stadium before 79,544 fans on a windy, brisk afternoon. The underdog Browns beat the mighty Colts and Hall of Fame quarterback Johnny Unitas and running back Lenny Moore, 27-0. Browns quarterback Frank Ryan threw three touchdown passes to MVP wide receiver Gary Collins and Brown rushed for 114 yards to clinch NFL title.

“I thought winning titles in Cleveland was going to be routine because of those great Browns teams and Jim Brown,” Rogers said.

Until Sunday, misery had been associated with Cleveland sports in so many ways and for far too long:

The Move – Browns owner Art Modell celebrated his team’s 50th season by moving to Baltimore at the end of the 1995 season. Modell was never forgiven by the city.

The Shot – Michael Jordan hit a jumper over Craig Ehlo at the buzzer to give the Chicago Bulls the playoff victory over the Cavaliers in 1989.

The Drive – In a span of five minutes, Denver Broncos quarterback John Elway led his team 98 yards in 15 plays to tie the score and Denver won the 1987 AFC Championship in overtime over the Browns.

The Fumble – Browns running back Earnest Byner, with a clear path to the end zone, fumbled less than 10 yards away and the Broncos went on to win the 1988 AFC Championship over the Browns.

Game 7 – The Tribe led 2-1 in the bottom of the ninth with one out in the 1997 World Series only to watch relief pitcher Jose Mesa blow a save, which led to an extra-inning defeat.

Red Right 88 – The Browns were within field goal range but decided to go for six points in a play called Red Right 88, but the pass was intercepted and the Browns lost to the Oakland Raiders in the 1981 playoffs in Cleveland.

Sports misery and failed attempts at a championship became so intertwined with Cleveland sports that an ESPN 30-for-30 documentary, Believeland, was produced. Not only did it remind fans of the heartache but it also inspired the possibilities.

Skeets regular Kenneth “Dawg” Jefferson, 64, also attended the ’64 NFL championship game. He remembered the cold. He remembered the wind. He and his father were in section 5, row W, seats four and five at Municipal Stadium. His memory of a championship was all he had, but he figured the time was finally right for the drought to end.

“The pieces were in place for the Cavaliers to do it this year,” said Jefferson, over the blaring sounds of Queen’s “We are the Champions.” “If they didn’t do it this year, it wasn’t ever going to happen [again]. I am so happy a Cleveland team finally got it done.”

The drought certainly would not have ended without the play of LeBron James, who was named MVP. This is the same James who left Cleveland for the Miami Heat in what has been called “The Decision.” It was a move that led many Cleveland sports fans to burn James’ No. 23 jersey in the streets. The move led owner Dan Gilbert to write an infamous letter to the fans of Cleveland that spoke of James’ betrayal. Fans came down so hard on James that many in the black community turned to support James because of the often overwhelming backlash.

But all was forgiven when James left Miami and returned to Cleveland. His letter to the fans, printed by Sports Illustrated, expressed the importance of coming back home and helping this city win a championship.

“James leaving Cleveland was the right thing for him to do at that time,” Jefferson said. “He may have not done it right, but he had the right to leave. He was a free agent. But he came back as a man. He’s been squeaky clean his entire career – no scandal, no nothing. LeBron makes so much money for this city and not many people have said thank you.”

Brown the legend says thank you.

The cord of sports heroes in Cleveland runs from Brown and now to James. Brown was once the best football player on the planet who also helped the disenfranchised and continues to do so, especially through his Amer-I-Can program that he founded in 1988 to provide hope for former gang members. James also is known to help those in need. For example, his foundation provides college scholarships to youths in Akron, Ohio.

Now, the mantle has been passed.

“The drought is over,” said Brown from his home in Los Angeles. “I’m so proud of LeBron. It was great to see that kind of courage, dedication and teamwork. And to be led by LeBron James to a historic championship for a great city of fans who have stayed loyal for all of these years is really wonderful.”

Despite the drought, Brown, 80, was confident the city would win another championship in his lifetime.

“I knew we’d see it again because for it not to happen fans would have to stop going to games,” Brown said. “And these fans are not going to give up. If the fans don’t give up, how can the players give up? These fans will remind you how long it’s been since we won it last, and LeBron rode that wave and went to another level. The level that he went to was unprecedented. He gave everything he had to make this happen.”

And for now, the curse that has haunted Cleveland since 1964 is finally over.