The start of Tee Higgins’ football career sputtered so often that he’d find a spot in the stands next to his mother when he should have been on the field.

Higgins attempted to quit pee wee football so many times that his mother and aunt had to develop more convincing measures.

“He didn’t like to get hit, so me and my sister would tell him to run,” said Higgins’ mother, Camillia Stewart. “One game in particular, he got hit and came in the stands with us. His coach was looking around for him. He loved Hot Wheels, so my sister said if he got back out there, she’d buy him one. She bribed him. He went back out there and the rest is history.”

Higgins and his Cincinnati Bengals have certainly come a long way.

The second-year wideout emerged as a breakout player for a dynamic Bengals offense while the team won its first division title since 2015. On Saturday, the Bengals will host the Las Vegas Raiders in the AFC wild-card round with a chance to win their first playoff game since the 1990 season. Higgins, who grew up a Bengals fan because of his favorite player, A.J. Green, is all too familiar with his team’s drought.

“After last season, we knew what we could do,” said Higgins, who caught 74 passes for 1,091 yards and six touchdowns this season. “Our connection grew during training camp. So far, it’s been a hell of a ride. We just got to keep it going and enjoy the process every week.” 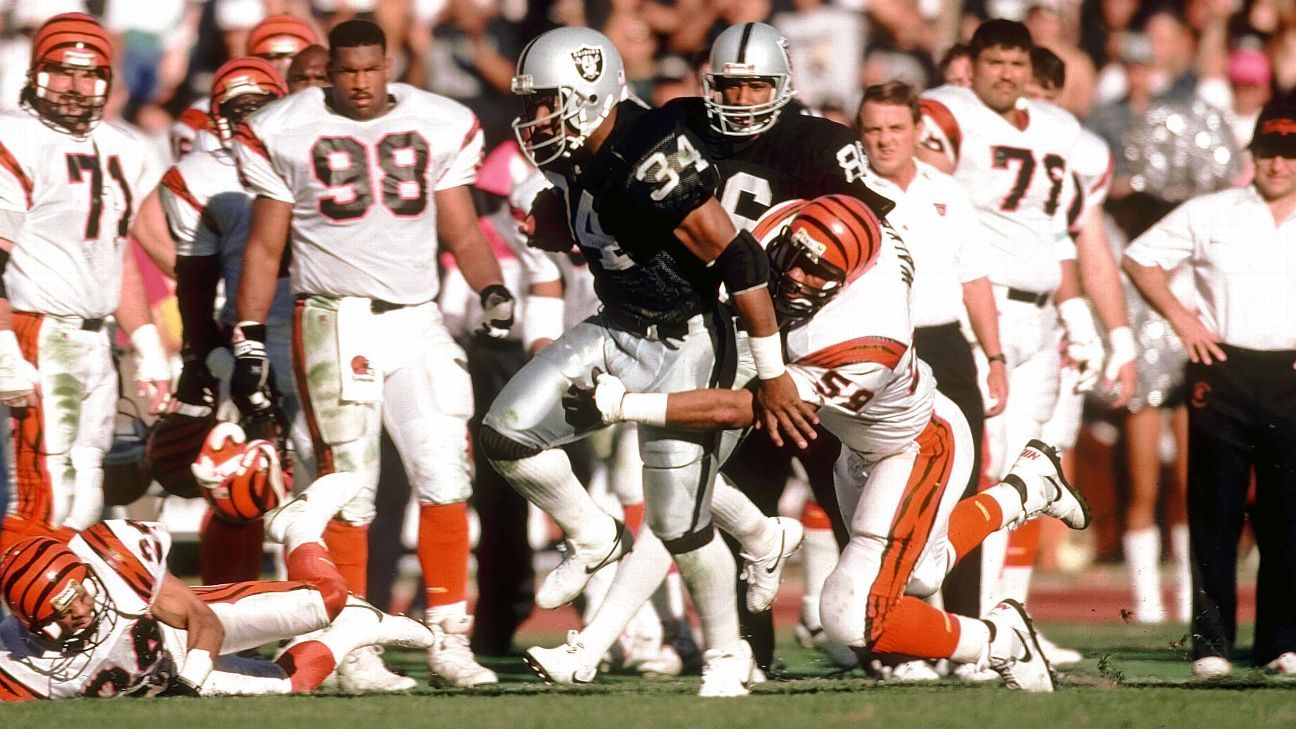 Bo knows … hexes? How the Bengals are poised to break the ‘Curse of Bo Jackson’ vs. the RaidersRead now

But for Higgins and his mother, the journey goes beyond the opportunity to play for his favorite team. Higgins understands the personal journey his mother has been through.

“Whatever issue I’m having, it’ll never compare to what my mom went through, by overcoming drugs, getting shot and being sober for all of these years,” Higgins said. “If I ever have a problem, I just look at how she’s overcome and I keep it moving.”

Stewart, known as “Lady” in Oak Ridge, Tennessee, about 25 miles west of Knoxville, comes to tears when asked to describe what Higgins means to the family.

“I didn’t think I deserved to have another child because of the life I lived,” said Stewart. “But God blessed me with him. Tee’s seen my life. He’s seen my struggles, but he and his sister have been there for me. Even when my life felt like it was coming to an end, they were still there rooting me on.”

While growing up in Oak Ridge, Higgins didn’t know his mother was battling drug addiction. During those years, according to Higgins, she’d spend time in jail for possession and time in and out of rehab. Her drug binges had so much control over her that she’d leave Higgins, even before he was of school age, alone overnight. Higgins’ older sister, Shakia “KeKe” Stewart, said she herself often lived with their grandmother or with one of Stewart’s sisters.

When Higgins woke up in the middle of the night and realized he was alone, he’d often run out barefoot to his grandmother’s house down the street, Shakia Stewart said.

“I’d let him come in and hold him,” said Shakia Stewart, who is 10 years older than Higgins, who was about 5 or 6 years old at the time. “I remember him coming down the street just crying, asking, ‘Why my mama leaving?’ And I couldn’t really answer him at the time. I’d just tell him that she was sick, and we’d put him in the bed with us [Shakia Stewart and her grandmother].”

It was a prelude to an incident that shook Higgins and his sister. Higgins remembers in kindergarten being called to the school office, where he found his sister crying, telling him between sobs that their mother, who was no longer in a relationship with Higgins’ father, had been shot in the head by her then-boyfriend. Shakia Stewart picked her brother up from school and drove him home to a scene he never forgot.

“I remember all of these police cars and the ambulance and all I wanted to do was see my mother, but no one would let me,” Higgins said. “I’m crying and my sister’s telling me she’s going to be OK, and we’ll see her later. I didn’t want to hear any of that because I just wanted to see my mom.”

“I’ve had hate for him ever since,” Higgins said. “But she tells me God wants us to forgive … I’m still working on it. It’s going to take me some time, but this says a lot about my mother.”

Camillia Stewart survived the shooting but battled her addiction over the next few years, which often meant time in jail and time away from her children and grandchild when her daughter Shakia had a daughter. But five months in jail in 2007 followed by nearly a year in a rehab facility helped Camillia Stewart with her addiction.

Camillia Stewart said she has been sober for more than 14 years and now works as a home health care provider.

“I had to shake them demons loose so I could be right for my family,” said Camillia Stewart, who also credits her Christian faith with her rebirth. “Once I got me right and started loving myself, I could love somebody else. And they loved me enough to understand that and give me time to get to that point in my life. They never gave up on me.”

Higgins continues to carry his passion for his mother on and off the field.

“She always wanted us to stay in school and finish college. Obviously, I left college early to go pro. But I’m going back to finish because I made a promise to her,” Higgins said. “She remains an inspiration because of all the things she went through in her life.”