The album is the musical equivalent of a therapeutic group chat

The Undefeated asked our writers to pick the most important albums from an insane year. Find the rest of their selections here.

Jazmine Sullivan’s Heaux Tales could’ve easily been drowned out. For one, it dropped 48 hours after the U.S. Capitol insurrection in Washington, and quite frankly, that’s where much of the discussion in and around America lived in the moment. The world wasn’t purposely conspiring against the Philadelphia native. But it damn sure wasn’t doing her any favors, either.

There’s a saying that, if practiced, can lead to a true purpose-driven life. “Do the work. Control what you can control. And let life figure out the rest.” Sullivan did just that. Heaux Tales is not only one of 2021’s standout projects, but it could well be one of the most honest. Transparency has always been one of Sullivan’s strengths. She once crafted hit records about destroying property because of a jilted lover and having a heart-to-heart with another, saying she was in love with someone else.

At the time of its release, my assessment was that Heaux Tales is the album version of a group chat. On any given day, a group chat takes on a litany of forms: It’s a stand-up comedy show. It’s an advisory board on everything from career moves to happy hours. It’s a debating platform. And, in the case of Heaux Tales, it’s therapy.

Six individual testimonies from Black women serve as the collective muses for Sullivan’s first album since 2015’s Reality Show. Antoinette, Ari (Lennox), Donna, Rashida, Precious and Amanda each confess to a litany of personal insecurities and dreams: insatiable sexual desires, the love of money and the options it brings for a better life, losing love and being the reason, how to find the beauty in themselves in an Instagram-obsessed world. They dictate the tempo through their individual “tales,” giving Sullivan the freedom to wax poetic in unabashed, vulnerable displays. Like so: “Oh, I’m tryna find a f— to give for you/You ran out of chances of forgivin’, yeah,” she sings on “Pick Up Your Feelings.” “Yeah, listen, I ain’t listenin’/Just for you to go and break my heart again.”

Since the dawn of time, men have been trying to figure out what women talk about among themselves. And while it is true that most men couldn’t handle the brutally honest truth from women, Heaux Tales feels like it’s as close as any of us will ever get to being a fly on the proverbial wall.

History is littered with examples of Black women whose voices, emotions and experiences have been stripped of their humanity. With Heaux Tales comes the deep emphasis on all three and exactly why they matter. Not just the grandiose moments, like a storybook wedding, but also the intricate realities of life. The reality we desire is oftentimes on the other side of the fear we place on ourselves that tells us we’re not worthy.

On “The Other Side,” Sullivan boldly declares the life she yearns for includes a healthy relationship, kids by a surrogate and spending her man’s money without a care in the world. “Price Tags” with Anderson .Paak is impossible to expunge from your head with Sullivan championing that “money keeps that p—y wet.” It’s a cunning twist in an industry where it’s commonplace for male artists to flaunt their wealth to woo women.

On the flip side, we often hear about heartbreak over the transgressions of a male partner. “Lost One” exposes the vulnerability of love lost that comes from being the root cause for its fracture. “I know that that’s too much to ask/I know I’m a selfish b—-/But I want you to know I’ve been working on it,” Sullivan admits, “I know it don’t matter/I know it don’t help you heal no f—in’ faster.” That type of guilt never truly leaves a person and impacts every relationship thereafter. And it almost begs the question: Was Sullivan speaking from personal experience? And if so, how does that person hear this record?

Tales is littered with such standout moments. One, however, stands above the rest in the album’s final song, a duet with H.E.R. on “Girl Like Me.” Is it a cause for grief that Sullivan chose to end the album with a song on which both she and her collaborator question their self-worth? But in a way, it’s perfect. The album didn’t need an emotionally rectifying moment to end with because the 14-track odyssey is a reflection of life. We don’t have it all figured out. We go through a number of emotions on any given day. And some days end with a come-to-God moment when we ask ourselves, “What the hell am I doing wrong?” 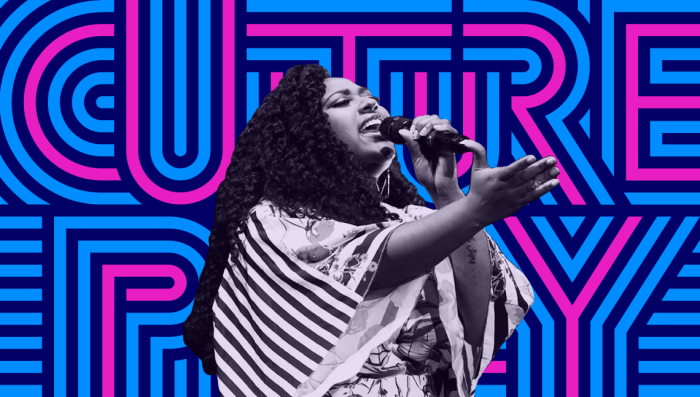 Listen how Sullivan belts out lines such as, “What you asked I would’ve given/It ain’t right how these hoes be winning,” or how she all but screams from the top of her lungs, “‘Cause y’all n—as be taking us there.” Or the way H.E.R. confesses that maybe she should look like a stripper since that’s what her ex can’t seem to get enough of or the emotional defeat when she says, “I can’t do this good girl s— no more.” Those aren’t just lyrics. They’re survival mandates.

They lived those lyrics and these are the scars. As a man, it brought me back to something Tupac Shakur once said about how Black men “be ridin’ hard on our sisters [and] we don’t be knowing the pain we be causing.” Conducting an honest assessment of ourselves as men, we have to ask ourselves, does some woman from our past think of us when they hear this song? More importantly, what have we done to mature?

At any moment, all of us have questions swirling in our heads. Some we can answer for ourselves. For others, it’s about letting life do what life does and let it unfold on its own. Heaux Tales isn’t just an escape for Black women. It’s also a musical testament for Black women to be their most honest, vulnerable and transparent selves in a society that’s never shown them their deserving deference.

That is, of course, what group chats are for. Feeling comfortable to be the truest version of yourself should always be the end goal.