Beyoncé, Kevin Hart and others on a growing list of athletes and celebrities supporting hurricane relief efforts

Many celebs are raising funds or lending a hand

Celebrities continue to show up for those in need of assistance in the wake of Hurricane Harvey’s devastating impact on Houston.

Actor, singer and comedian Jamie Foxx announced last week that there will be a telethon on Sept. 12 to help raise money. The telethon will be organized by rapper and Houston native Bernard “Bun B” Freeman and music manager Scooter Braun. Foxx also donated $25,000 to global crowdfunding organization GlobalGiving.

Beyoncé, Michael Strahan, Kelly Rowland and Oprah Winfrey are among the celebrities announced to participate in the one-hour telethon. Hand in Hand: A Benefit for Hurricane Harvey Relief will air live at 8 p.m. ET on all major networks (ABC, CBS, NBC, Fox, plus CMT). Proceeds from the event will go to several charities, including the United Way of Greater Houston, Habitat for Humanity, Save the Children, Feeding Texas and the Mayor’s Fund for Hurricane Harvey Relief.

Director, actor and producer Tyler Perry is donating $1 million to aid in relief for those affected by Hurricane Harvey. He took to Facebook on Monday to announce that $250,000 will go to Beyoncé’s pastor, Rudy Rasmus, and another $250,000 to Joel Osteen’s Lakewood Church in Houston. Last week, when Osteen was accused of not wanting to open his doors for relief to those in need, Perry came to his defense (link).

Perry did not disclose where the remaining $500,000 will go.

On Sept. 2, Houston Rockets point guard James Harden announced he will donate $1 million to the city of Houston to aid in Hurricane Harvey recovery.

Harden spoke at a news conference at the NRG Center along with Houston Mayor Sylvester Turner, which has housed evacuees since Harvey hit the Houston area more than a week ago. The Rockets gave Harden a four-year extension in July, with sources telling ESPN at the time that it is a supermaximum extension that will guarantee him $228 million through the 2022-23 season.

NBA All-Stars, NFL players, MLB standouts and celebrities continue to publicly show their support for those affected by Tropical Storm Harvey, which continues to pummel the Houston area, displacing residents. While many have escaped the rising floodwaters and pouring rain, others are still seeking refuge.

Meanwhile, many are going beyond social media to donate money and time. Houston Rockets owner Leslie Alexander donated $10 million to the Hurricane Harvey Relief Fund, which was started by Turner.

“Our hearts are heavy seeing the devastation that so many of our friends, family and neighbors are experiencing,” the team said in a statement.

Comedian and actor Kevin Hart took to Instagram with a call to action urging others to pledge funds.

“This is a serious matter,” Hart said in the video. “I’m going to lead the charge and step it up in this way.”

Hart said he was donating $25,000 and beckoned for other stars such as Beyoncé, The Rock, Justin Timberlake and others to join in and spread the word.

Houston native and music superstar Beyoncé is giving back to her hometown. She released a statement to the Houston Chronicle saying, “My heart goes out to my hometown, Houston, and I remain in constant prayer for those affected and for the rescuers who have been so brave and determined to do so much to help.”

Beyoncé added, “I am working closely with my team at BeyGood as well as my pastor [Rasmus at St. John’s in downtown Houston] to implement a plan to help as many as we can.”

Established in 2013, the BeyGood organization does philanthropic work worldwide.

“That’s our city,” he said in a video. “There’s going to be a lot we need to do to help rebuild.”

“I can’t even begin to describe what it’s like to see people come together for a common cause,” Watt said.

Singer Carl Thomas posted a video on Instagram with a message that says, “This is happening now.” He is seen in the video on a boat assisting in the evacuation process.

Nicki Minaj and DJ Khaled responded with $25,000 pledges. Chris Brown pledged $100,000 and took the time to express skepticism about donating to Red Cross, while rapper T.I. lent his support. 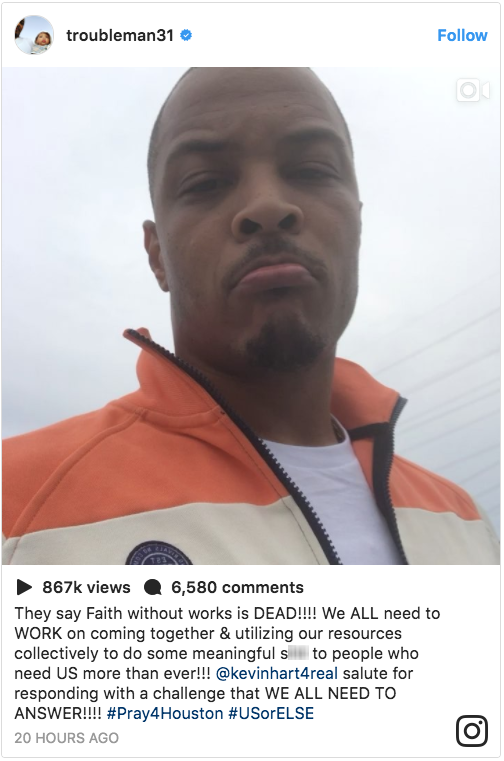 I'll donate 25K for Houston. Praying for everyone there. Great work @kevinhart4real

The Houston Astros ownership group pledged to donate $4 million to the relief efforts. The Texans and owner Bob McNair donated $1 million to the United Way of Greater Houston Flood Relief Fund. The NFL Foundation said it would match the $1 million donation, and New England Patriots owner Robert Kraft and his family pledged to match all funds donated to the Red Cross in support of Harvey flood relief up to $1 million.

Major League Baseball also contributed to the cause, joining with the players association to donate $1 million to the Red Cross and relief organizations chosen by the players.

St. Louis Cardinals first baseman Matt Carpenter, who is from the Houston area, said in a tweet that he will donate $10,000 to relief efforts for each home run he hits for the rest of the season.

Buffalo Bills defensive end Jerry Hughes, a native of the Houston area, told ESPN’s Josina Anderson he will donate $25,000 to relief efforts and an additional $5,000 for each sack he makes this season.

We are currently overseas in London and all I can think about is how devastated I am as I look at images of the damage Hurricane Harvey has caused. I am praying for the safety of all those affected. Houston has truly been a home to me over the last 8 years. Myself and @futuretheprince are working with local relief groups to aid and assist the people of Texas in anyway we can and in the most immediate way possible. I also want to thank all the men and women of service and volunteers for their courageous efforts to help people in need. I encourage everyone to do what they can to assist the people of Texas knowing whatever effort you can make to help will go a long way.

Thank you to all the first responders and people helping each other out. That's what we do as Americans. Here's one way you can help now. https://t.co/iGfE8rAoAu

My heart and prayers are with you Texas!

Please send your love and prayers to the people in Texas. 🙏🏾 #PrayforTexas

MusiCares, a four-star charity established by the Recording Academy, started a relief fund to support members of the music community affected by the recent devastation of Harvey. The organization offers confidential preventive, recovery and emergency programs to address musicians’ financial, medical and personal health issues.

“Now is a time when we must come together and take care of those who need help, as we are only just beginning to understand how life-altering Hurricane Harvey will be for its victims and their communities,” Neil Portnow, president/CEO of the Recording Academy and MusiCares, said in a statement. “It’s important that we step up and support the creative community, and take action to provide immediate assistance to members of our music family.”

ESPN.com news services and the Associated Press contributed to this report.

The Associated Press and ESPN.com news services contributed to this report.