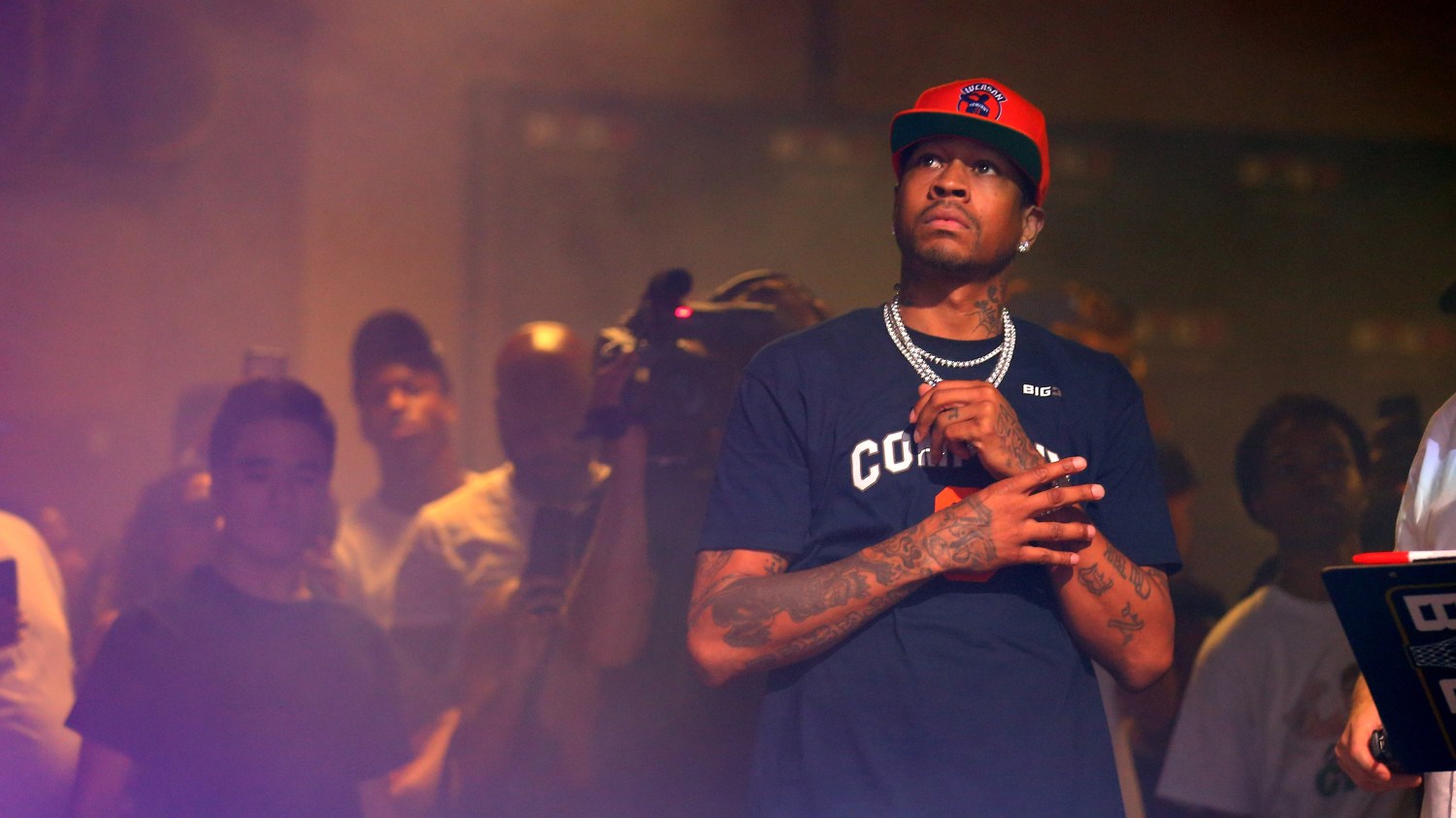 Allen Iverson #3 of 3’s Company is introduced to the crowd during week four of the BIG3 three on three basketball league at Wells Fargo Center on July 16, 2017 in Philadelphia, Pennsylvania. Mitchell Leff/BIG3/Getty Images
BIG3

Iverson sits, but still feels the love in Philadelphia homecoming

The Answer coaches — but does not play — in BIG3 game against Dr. J’s team

PHILADELPHIA — With a 6 p.m. start, the only BIG3 league games with an evening tipoff this season, ticket holders were slow to fill their spots. By the time the fourth and final game was set to begin, there was hardly an empty seat in the Wells Fargo Center.

Two Philadelphia 76ers legends, Allen Iverson and Julius “Dr. J” Erving, were to battle for BIG3 supremacy and bragging rights in front of the home crowd.

But fans were thrown for a loop after learning 3’s Company coach/player Iverson would not play in Sunday night’s game against Erving’s Tri-State. Less than 30 minutes before tipoff of the first game, the 42-year-old Iverson announced via Instagram that he would not be playing “based on advice by [his] doctor,” but assured fans that he would coach his team to a victory over Dr. J.

Some of the fans — a crowd of 12,435, according to the BIG3 — were upset after learning of Iverson’s announcement.

Some of the players also weren’t aware of the last-minute change in plans.

“I kind of found out [Allen Iverson wouldn’t be playing] around the same time you guys found out, right before we were about to play them,” Tri-State’s Bonzi Wells said after the game. “We understand what it is, and Allen is a guy who drives our league. We were hoping he was going to play for the fans, because that’s what it’s all about.”

There was no explanation as to why Iverson didn’t play other than his Instagram post. Iverson and BIG3 founders Ice Cube and Jeff Kwatinetz were scheduled to speak at postgame news conference, but it was canceled.

The crowd’s angst temporarily subsided with the pregame introductions of Tri-State and 3’s Company. Erving, the last to be announced on his team’s roster, received a standing ovation. The 67-year-old expressed the joy he felt while standing in front of those who loved and supported him during the 11 seasons he spent proudly donning the Sixers jersey. Erving, who spent five seasons with the American Basketball Association (ABA) before joining the Sixers from 1976-87 and leading the team to a championship in 1983, was considered one of the most dominant and innovative players of his era.

Erving remains one of the most respected players in Philly sports history, evident by the number of fans, both young and old, who clung to his words as he addressed the crowd.

“Come here to have fun. Enjoy yourselves,” Erving said. “Understand that the players that are here and performing tonight are performing for you. “I love you, Philadelphia. I love you. I’m so happy to be back here.”

The cheers and chants became the loudest they were all night when Iverson appeared in the tunnel for 3’s Company.

Dressed in the navy blue and orange colors of his team, Iverson walked through the sea of hands that dangled from either side of the railings, awaiting a high-five or shake from the Hall of Famer. Iverson walked onto the court before almost instinctively cuffing his ear with his hand as the crowd roared while giving him a standing ovation. Phones and cameras flashed, and videos were recorded as Iverson blew kisses to each corner of the arena.

Iverson entered Philadelphia in 1996 as a fresh-faced 21-year-old who felt he had something to prove as the NBA’s No. 1 draft pick. Philly was the place where Iverson transformed from a boy to a man. A place where, despite having played 682 games in a Sixers jersey and then attempting to make a home at three other teams before landing back in Philly, the love from the home crowd always remained the same.

“It’s a great feeling,” Iverson told The Undefeated the day before the game. “It never gets old. Looking back on when I got the phone call [to join the BIG3], I’m so happy that I did it because you get to see your fans all over again and make them feel good about seeing you. I’m just happy I made the decision to do it. There will be a lot of nervousness, but excitement too. I’m just excited to see my Philly fam. I think it’s gonna be fun. It’s something that I hope the fans will remember for a long time. We gonna win. I’ll talk to my teammates and put together a good strategy. I don’t want to come back here and lose to Doc [Erving].”

The homecoming glory and Iverson’s expectations of a 3’s Company win were short-lived. Erving’s Tri-State dominated in a 51-44 win, building a 25-13 lead at halftime. The thinning crowd grew restless, and cheers were replaced with “We Want A.I.” chants.

Some loyal Iverson fans remained true to the end.

Adrian Wong and Ida Tsui sat courtside in the first row holding a “Hong Kong Loves AI #3” sign. The married couple, along with their friend Alvin Ho, traveled 18 hours from Hong Kong to the United States to see Bubba Chuck back on the court in Philadelphia for the first time post-NBA.

“We were a bit disappointed because the reason why we were there was because we were trying to see our basketball hero, but he didn’t play,” Ho said.

However, the couple’s sign caught Iverson’s attention. According to Ho, Iverson walked over to them, hugged Tsui and chatted with them before posing for a photo.

“It was like a dream come true that our basketball hero acknowledged us,” Ho said. “It was an extra bonus to meet him on the court and a surprise to us, so that made up for it.”