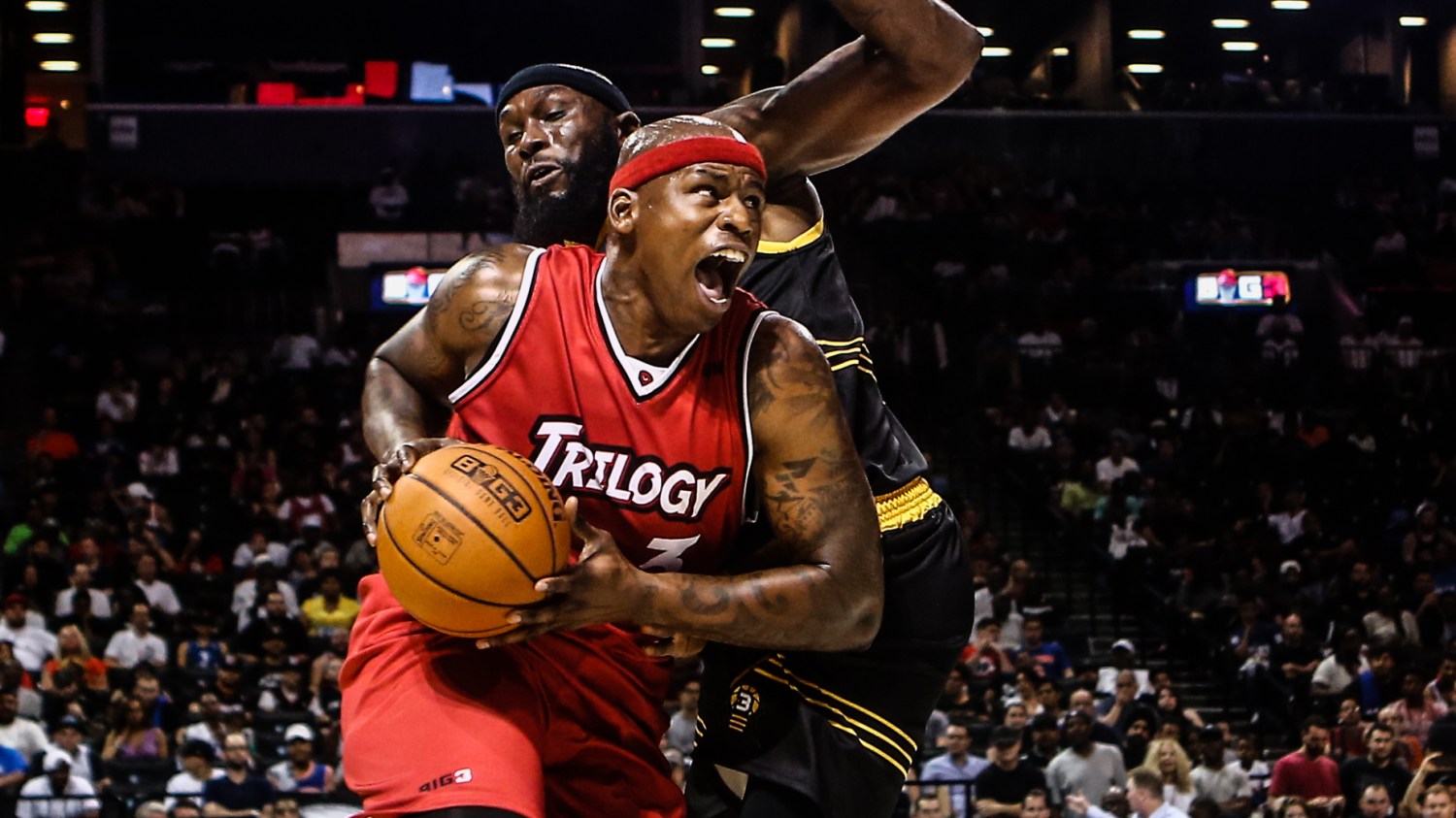 Trilogy’s Al Harrington dribbles around Killer 3’s Reggie Evans during the game between Trilogy and Killer 3s on June 25, 2017 at the Barclays Center in Brooklyn, New York. The BIG3 League, created by Ice Cube, debuted with four games of three on three basketball featuring former NBA players. Anthony Geathers for The Undefeated
BIG3

NEW YORK — There was no mic in his hand. No sound check. No Raiders cap. But O’Shea Jackson, better known as Ice Cube, was still center stage, sharply dressed in a suit and tie as he stood courtside an hour before the debut of his BIG3.

The day wasn’t perfect: Allen Iverson was clearly not Hall of Famer Allen Iverson anymore. Chauncey Billups didn’t attend because of ongoing talks about a front office job with the Cleveland Cavaliers. There were injuries, and some kinks still needed to be worked out. But for the most part, the debut of Ice Cube’s 3-on-3 league of former NBA players was competitive and well-attended by a star-studded crowd of 15,177 at Barclays Center in Brooklyn.

“It’s a great environment,” NBA All-Star James Harden told The Undefeated. “It’s rare to get these actors, actresses, stars of whoever you are, all in one building for one circumstance. It’s a dope event. Dope environment. Good music. Good vibes. And I’m happy to be a part of it and a witness of it. … The way this turned out, Ice Cube and whoever else put this on did a really good job.”

The game of 3-on-3 basketball has been popular in the United States for decades and is growing worldwide. It will debut as a sport in the 2020 Tokyo Olympic Games. Perhaps by then, the United States might want to bring the best players from BIG3 to represent the country.

Brooklyn rapper Fabolous performed between the second and the third games, to the locals’ delight.

There were cool jerseys with nicknames on the back such as “The Answer” for Iverson and “W. Mamba” for Brian “White Mamba” Scalabrine, “White Chocolate” for Jason Williams and “Junkyard Dog” for Jerome Williams, who barked for the camera pre-game.

In the BIG3 the game ends when one team scores 60 points, with halftime arriving when a team reaches 30. There is hand-checking and a 4-point shot.

“Everybody that is in this league wants to ball,” Ice Cube told The Undefeated. “They’re not here just to hang out, shoot around. They are real ballers and wanted real competition. They were tired of playing in the Pro-Ams and stuff, and they were ready to play with their peers. It was our job to set the stage … it’s their job to take the league to the next level.”

The former NBA players took the games to a respectable level that Ice Cube could be proud of.

Three of the four games were close. Lewis’ 3-point play clinched 3 Headed Monsters’ win over Mike Bibby’s Ghost Ballers in the opener. DeShawn Stevenson nailed a game-winning 3-pointer to lift Power past O’Neal’s Tri-State and slapped hands with Ice Cube afterward. There were boos when shooting struggles took place with Iverson on the bench coaching during his 3s Company’s victory over the Ball Hogs. Al Harrington scored 25 points as Trilogy cruised in the final game, blowing out the Killer 3s sans Billups by 15 points.

“You walk out there and see the crowd, and it’s like that feeling you get at school the first day or your first NBA game of the season,” Lewis told The Undefeated. “Every year, that first game was a big game. I couldn’t sleep last night, and I had that same [nervous] feeling coming here.”

BIG3 play should improve over the 10-week season as players get the rust off. There is no way Mahmoud Abdul-Rauf, 48, is going to keep missing wide-open 3-pointers. But there were some disappointments for the fans, including the superpopular Iverson being more of a coach-player than a player-coach.

Iverson’s 3’s Company teammate DerMarr Johnson told The Undefeated it wasn’t until recently that the 2001 NBA MVP decided he would play, so Iverson hasn’t been working out that long. It felt like a playoff game as the crowd roared in anticipation when the four-time NBA scoring champ ran to the floor slapping the hands of fans. Iverson, an 11-time NBA All-Star, started but came out shortly afterward to take off an irritating television mic. After chants of “We want A.I.” brought him back onto the floor, Iverson looked like he needed more practice as he made one jumper and missed five shots, dished out two assists and had one steal in nine minutes of play.

“The best part about this game here tonight and all the other games, it was exciting all throughout,” Iverson said. “It didn’t need Allen Iverson the player, per se.”

The 42-year-old Iverson understands that he is the face of the BIG3 playerwise, but he prefers to coach. He signed autographs during halftime and was gracious with his time with the media. His presence alone is huge for the BIG3. And with each week of play, the fans and media will remain curious and infatuated with whatever he does.

”I signed up to be a coach, player and captain. Coach part is going to go on throughout the game,” Iverson said. ”Playing part is not going to be what you expect. You’re not going to see the Allen Iverson of old out there.”

BIG3 had a lot of cool swag for sale, including a jersey of a star player from each team. It wouldn’t be surprising if jersey sales for Iverson and “W. Mamba” did well. Billups’ jersey with the Killer 3s that reads “Mr. Big Shot” was available for sale, but he may never wear it. The 2004 NBA Finals MVP is still in negotiations with the Cleveland Cavaliers for the president of basketball operations position, sources told The Undefeated. Billups did not attend Sunday’s games, and a source told The Undefeated that Billups didn’t want to be a distraction on BIG3’s first day with the Cavaliers situation so fluid.

The first day of BIG3 games will be shown on Fox Sports 1 on Monday night. Fans watching on television will get a condensed version of games and also bleeped-out curse words from the likes of Payton. The first two games seemed to take about an hour. If the score were cut to 50 or 42, the contests would probably be quicker and more fan-friendly, with better play because of fewer minutes. But for the first day, most of the players appeared to be in good shape, motivated and even physical, as some dove to the floor for loose balls.

The BIG3 should get better from here. Iverson, the former Philadelphia 76ers star, may get in better shape knowing that a stop in the City of Brotherly Love is only three weeks away.

The one thing the BIG3 can’t control is injuries.

3 Headed Monsters guard Jason Williams left Game 1 with a knee injury, but Payton expects him to return to action in Philadelphia. Power captain Corey Maggette also suffered a leg injury that isn’t expected to be too serious. Trilogy captain Martin pulled a hamstring as well. Iverson complained about his legs being tired after playing just nine minutes.

“It’s going to be competitive,” said Lewis, who made the BIG3’s first 4-point shot. “It’s on TV. You have the internet nowadays. Nobody wants to be embarrassed. Guys came ready to play. I just think it’s a little different. [Williams] came and greeted us and said the doctor said nothing was wrong and everything was fine. That’s good. We’re going to need Jason Williams.”

It wouldn’t be surprising if more former NBA stars decided to play in the future.

BIG3 also gave longtime NBA fans a chance to either attend or watch and introduce their children to Dr. J, The Answer, The Glide, The Glove, K-Mart, The Ice Man and Ice Cube.

“It’s about getting a chance to see guys you can’t see anymore, especially in this setting,” Ice Cube said. “Seeing our Hall of Fame coaches, celebrating what they did for the league and what they did for us. And now, they’re competing like they are used to. This is not a charity game. This is not a one-time tournament. This is a season. So these guys are fighting for the chip, and it’s going to be great to see them back.”

The BIG3 has people of color and women in elite roles.

As one of the two co-founders of BIG3, Ice Cube may be the most notable African-American to be atop a professional sports league since Manny Jackson owned the Harlem Globetrotters. Former NBA sharpshooter Roger Mason Jr., an African-American, is the president and commissioner of BIG3.

Amy Trask, who was previously named the NFL’s first female CEO by Oakland Raiders owner Al Davis in 1997, is now CEO of BIG3.

“Look, doesn’t that say it all?” said Trask to The Undefeated. “I had the great fortune and tremendous privilege in my life of working for two men, Al Davis and now Ice Cube, neither of whom are remotely concerned about my gender. We’re all here to do a job.

“Race, gender, ethnicity, religion or any other individuality has no bearing whatsoever on whether any individual can do a job. It’s absolutely irrelevant if we are engaged to do a job.”

Next up for the BIG3 is Charlotte, North Carolina. The television debut and the sold-out crowd in Brooklyn will probably help sell tickets at the Spectrum Center. The arrival of Maggette, a former Duke star, McCants, a former North Carolina star, and former Charlotte Hornets forward Lee Nailon should be attractive to the locals. Perhaps even Michael Jordan will show up in the arena his Hornets play in to join the NBA family reunion as a spectator.

“I’ve been excited about it since they had the press conference in January. I can always say I was one of the first players to play in it during the first year it was created,” Lewis said.