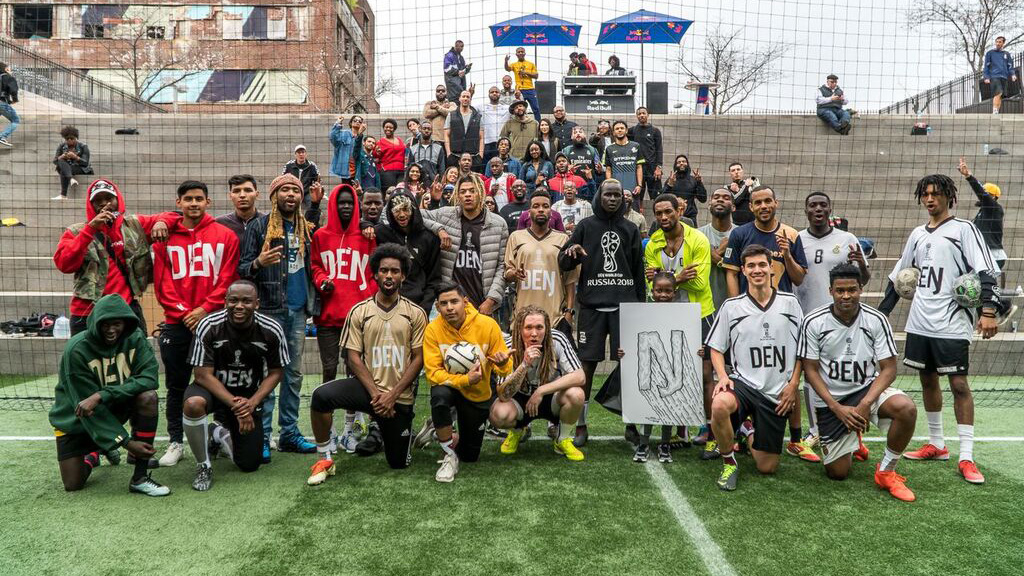 Attendees pose for a portrait following the Black Arrow street soccer tournament at the Five Point MARTA station in Atlanta on May 10. John Tangney / courtesy of Aaron Dolores

Black Arrow FC at intersection of soccer and black culture

Ahead of the 2014 World Cup in Brazil, Aaron Dolores and five friends wanted to take in the pompous quadrennial soccer tournament in a novel way. It would be boring to watch the games on television and too much of a “tourist trap” to fly to South America for the weeks-long competition.

So rather than travel to where the action was, the group hopped a flight to Europe to observe the games in the home countries of competing teams. Over 12 days, they watched the Italian national team take on England from Milan, Switzerland against France from Zürich, and Germany versus Ghana from Brandenburg Gate in Berlin. During the first stage, Dolores and his crew watched Croatia take on host Brazil inside Pula Arena, one of the few remaining Roman amphitheatres.

What was supposed to be two weeks of partying in central Europe turned into a cultural expedition that opened Dolores’ eyes to the myriad ways in which soccer is a global phenomenon that transcends polyester balls and coordinated chants. Soccer, he found, was a religion or way of life for not just the people he happened upon in Europe but for the 3.2 billion people who ended up watching that year’s World Cup.

When Dolores returned to the United States, he sought to take what he absorbed abroad and fuse it with his passion for creating experiences that are tailored to a black audience.

Thus, Black Arrow FC was born. Billed as a “lifestyle brand focusing on the intersection of soccer and black culture,” Black Arrow is an event-based and digital media community (through a website and a 60,000-user-strong Facebook page) that targets an African-American audience and its expansive domestic and international history.

Since 2017, the organization — whose name is derived from the nickname bestowed upon Gil Heron, the father of musician Gil Scott-Heron, by fans when he became the first black player to play for Scottish club Celtic — has hosted parties, produced documentaries and taken over the stands at MLS stadiums in Atlanta, New York City and San Jose, California.

For this month’s Russia World Cup, Dolores, along with 32 Black Arrow followers, will embark on an eight-day trip across Colombia during the third week of competition. The trip will serve as an exploration of Afro-Colombian culture through soccer exhibitions, trips to local museums, volunteering at local charities and watching tournament games with the country’s fan base. It seeks to both exhibit the diversity of black people and to dispel the image of what a soccer fan looks like.

“Part of what I’m trying to bring to black people and what we’re doing in Colombia is being, like, ‘Forget what you think about the sport, forget your perception of it. Let’s just use this as a way to have fun to see what we can learn, to see what different experiences we can create.’ And that’s what’s most important,” Dolores said.

But “black soccer fan” has long felt like an oxymoron. The long-held perceived optics of American soccer have been suburban homes, Toyota minivans, and “orange slices, Capri Suns, soccer moms,” as Dolores puts it. Soccer is what white people did.

But over the past decade, that lily-white stereotype has given way to a burgeoning black soccer audience in America. In 10 years, MLS’s black audience on ESPN2 has increased by nearly 70 percent, according to Nielsen; black viewers have grown from 7.9 percent in 2007 to 13 percent last year, matching the demographics of African-Americans in the United States (13.3 percent).

These black fans are at dive bars across the country at 8 in the morning to watch the English Premier League or tailgating at MLS stadiums from New York to Kansas City, Missouri, to Los Angeles. Ahead of Atlanta United FC’s home opener at Mercedes-Benz Stadium in March, where 70,000 fans broke a 22-year MLS attendance record, Black Arrow held a 5-on-5 street soccer tournament outside of the MARTA train station, followed by a party. The dress code was rare and classic soccer jerseys.

Similar to the recent re-explosion of professional wrestling, it’s suddenly cool to be a soccer fan. Musicians including Lil Jon, Snoop Dogg, and Beyoncé and Jay-Z have been spotted at various matches over the years. Kobe Bryant has rocked AC Milan and Barcelona kits and is possibly the most well-known U.S. women’s national team fan. LeBron James bought a 2 percent stake in English club Liverpool in 2011, a $6.5 million investment that James, in the words of Kendrick Lamar, recently “freaked” into $32 million. At the beginning of June, Nigeria’s World Cup kits sold out within minutes of becoming available on the Nike website.

RT @LFC: #FollowFriday If you only follow one new person on Twitter today, make it @KingJames, the most famous LFC supporter in America!

But despite this proliferation of black soccer fans in recent years and the fact that MLS is the most diverse league in America, soccer still trails three of the four major American men’s sports (NFL, NBA, MLB) in African-American viewership.

Part of that also falls on American soccer organizations to be more visible in black communities. That involves soccer organizations, including U.S. Soccer, the official governing body of American soccer, making a concerted effort to expose kids to the sport no matter their race or class to start the process of cultivating a new fan base. U.S. Soccer acknowledged the problem in 2016 when then-diversity task force president Doug Andreassen told The Guardian that the American soccer system only works “for the white kids.”

Film executive Franklin Leonard grew up an Army brat in Germany, winners of four World Cup titles, leaving him no choice but to take up soccer at a young age. (His younger brother Marshall Leonard played with the New England Revolution from 2002-07.) Leonard, who is a Los Angeles FC season-ticket holder, says U.S. Soccer must make an “effort to make sure that soccer is available as a sport in communities that are disproportionately African-American” and must proactively keep engaged those who have already expressed interest in the sport. If not, soccer risks continually losing those children, who will eventually become their television-watching audience, to the NBA and NFL.

“It’s imperative that the U.S. Soccer Federation do a better job of making sure that the sport is available to everyone regardless of socioeconomic background,” Leonard said. U.S. Soccer’s Diversity Task Force page has sat empty since at least July 2016, according to a digital archive website. The organization could not be reached for comment.

Raising the visibility of its black athletes, such as Toronto FC’s Jozy Altidore and Orlando Pride’s Sydney Leroux, is also imperative for U.S. Soccer. Representation matters, and those watching the sport, young and old, want to see people who look like them on the screen. Leroux, who has an African-American father and a white Canadian mother, told ESPN in 2015 that one of the most memorable moments of her career was when a young biracial girl approached her and said, “You look like me, I want to be like you.”

On the international scene, there are a plethora of popular black players who rival superstars in American sports: France’s Paul Pogba, Italy’s Mario Balotelli and Belgium’s Romelu Lukaku, to name a few. Pogba, who plays for Manchester United, has more Instagram followers than two-time NBA MVP Stephen Curry.

But American soccer lacks that transcendent star, black or white. The most popular stars outside of Landon Donovan in recent memory have been European exports David Beckham and Zlatan Ibrahimovic. American soccer still hasn’t found its LeBron James.

America’s most famous black player was arguably Freddy Adu, who in 2004, at age 14, was drafted No. 1 overall in the MLS SuperDraft. Adu was hyped by Nike and Pepsi as the “next Pele,” but within three years he was out of the league.

But that may change in the coming years for both the women (Crystal Dunn, Lynn Williams, Adrianna Franch) and men (John Brooks, Bill Hamid, Weston McKennie) of the national teams, MLS and the National Women’s Soccer League.

“As a whole, MLS is growing since the league started,” said D.C. United’s Kofi Opare, who was born in Ghana and attended the University of Michigan. “But as far as reaching out to the black American community, I think by bringing players who have a higher profile.”

That missing LeBron James-like athlete is a tough sell for the black American soccer fans. Without that type of player, there will continue to be just pockets of black fans sprinkled around the stands at MLS stadiums rather than a sizable contingent showing up.

Not all black fans necessarily dwell on the racial makeup of the people they watch soccer with; they are aware that there are few faces who look like them, but it doesn’t necessarily bother them.

Kaylé Barnes, a director at a nonprofit in San Francisco, is aware that, as a black woman, she won’t find too many people who look like her. But because of organizations like Black Arrow that provide spaces for black people, she doesn’t feel a sense of isolation.

“It’s always nice to have people that you have some sort of familiarity with, whether it’s because of background or geography or something,” she said.

Which is what Dolores wants to accomplish with the trip to Colombia: expanding what that “familiarity” means. He is struck by how “siloed” African-Americans are from their history. Many black Americans, he said, believe there is a comet-sized difference between themselves and Africans, West Indians and Afro-Latinos. “It literally is like the ships just landed on different places,” Dolores said. “We all came from the same exact place.”

Soccer can be used as a vehicle to learn more about one’s history and culture. Nnamdi Azikiwe, Nigeria’s first president, used soccer to fight British colonial rule in the early 20th century. Various African nations had the South Africa national team banned from the World Cup and Olympics for 30 years until apartheid was ended.

“It’s the most important sport on Earth, period,” said Leonard, the film executive. “There is no other sport that affects as many lives as soccer does.”

Which is why Dolores and Black Arrow are traveling all the way to South America to watch sports. Being immersed in the Afro-Latino culture of Colombia will provide a history lesson that most children won’t learn in school.

“What Black Panther did for a lot of people was let people know that Africa exists. The biggest population of black people outside of Africa is the United States, Brazil and Colombia,” he said. “The idea is taking African-Americans to Colombia, where they are seeing Afro-Colombians — a lot of people don’t know there’s black people there.