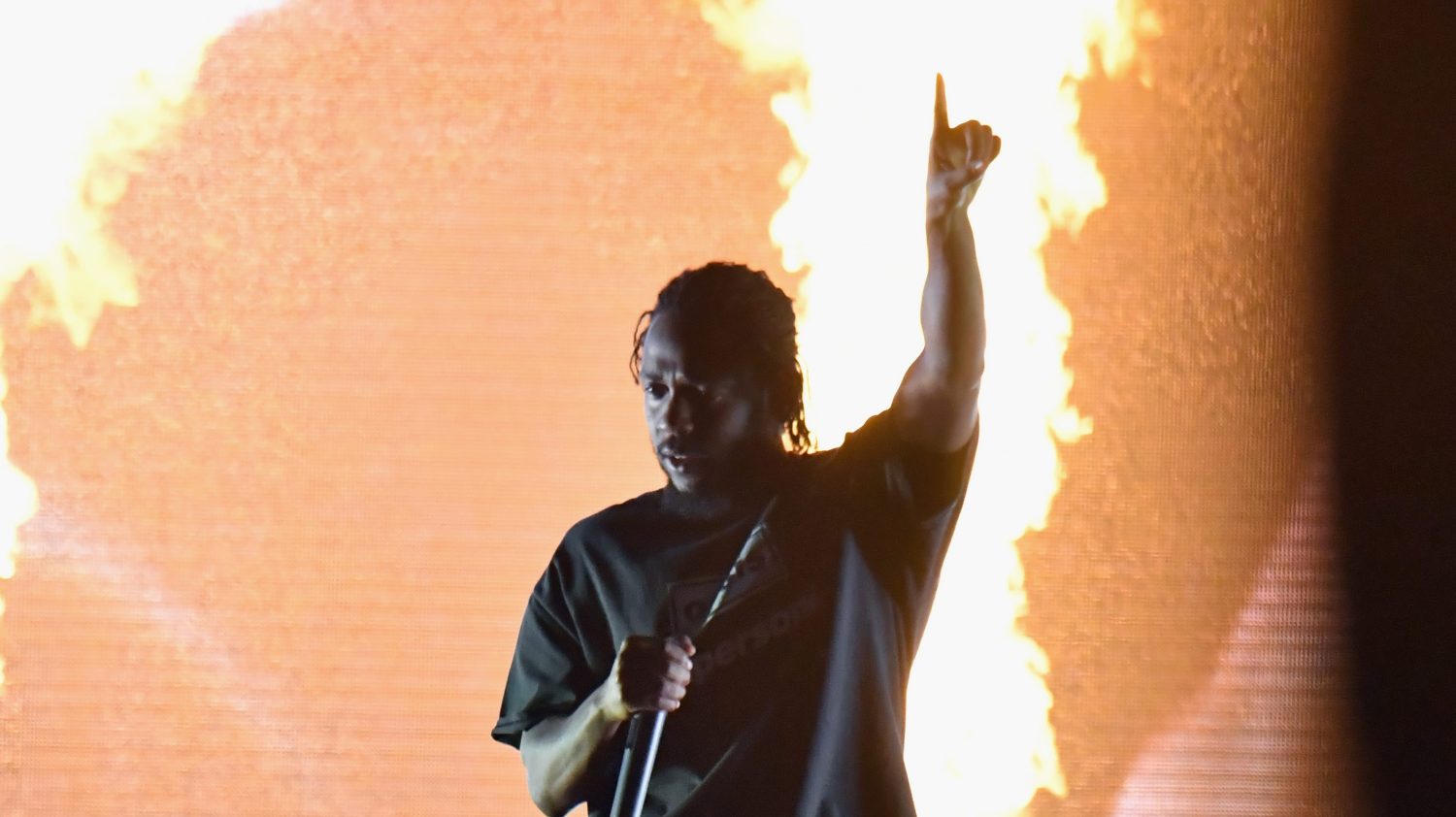 Kendrick Lamar performs on the Rock Stage during Day 1 of Grandoozy on Sept. 14 in Denver. Jeff Kravitz/FilmMagic
Music

Black artists get the noms, but not necessarily the trophies, at Grammy Awards

If Grammys history is any indication, Kendrick Lamar, Cardi B and their fans shouldn’t get their hopes up

The nominations for the Grammy Awards are in, and there’s historic news: Of the eight nominees for the prestigious album of the year Grammy, six are hip-hop/rhythm and blues.

The nominees are Invasion of Privacy from Cardi B; By The Way, I Forgive You from Brandi Carlile; Scorpion from Drake; H.E.R. from H.E.R.; Beerbongs & Bentleys from Post Malone; Dirty Computer from Janelle Monáe; Golden Hour from Kacey Musgraves; and Black Panther: The Album, Music From And Inspired By from “Various Artists,” but truly a Kendrick Lamar-curated project on which he appears a great deal.

Simply not winning these awards would be travesty enough for black artists, but the way the shows are promoted only adds to the insult.

Lamar leads all artists with eight nominations, with Drake right behind him at seven. Cardi B and H.E.R. each earned five nominations. Social media is already abuzz about the representation of black performers and women of color in the nominations this year.

However, this type of enthusiasm occurs every time nominations come out, and it often gives way to a letdown on awards night. It’s hard to imagine, despite the odds, that this year will be any different, thanks to the Grammy Awards’ decades-long history of shortchanging black acts even as these same artists’ performances are promoted for TV ratings. So yes, while the unprecedented three women of color being nominated for album of the year Friday is causing excitement among their fans and black fans in general, it’s probably best to temper expectations. Because if the history of this show is any indication, we’re only setting ourselves up for disappointment in February.

There have been very few cultural moments like the one that happened on April 23, 2016, for the epic music video/HBO movie premiere/album release for Beyoncé’s Lemonade. It marked a singular moment of social media togetherness to and for the consumption of black women full of empowerment, healing, hurt, twirled bats and sexiness. For one hour, the entire music world was captivated by the work of genius from Beyoncé, who was at one point writing an open letter to her cheating husband (the also megapopular nigh-billionaire Jay-Z, of course) and soothing over the generational scabs America has inflicted on black women, all while putting together one of her most complete works of art to date.

As soon as the movie was over and Beyhive (we were all members of the Beyhive that night) flocked to our respective streaming sites of choice to find the album, I sent out a tweet about an article I’d have to write in a few months. “Working on Think Piece #6,” I wrote in reference to all of the fodder for literary thought I got from Lemonade. “Why Adele shouldn’t have won the 2017 Album Of The Year Grammy over Beyoncé.”

Of course, we know what eventually happened. Beyoncé was nominated for nine Grammys related to Lemonade in 2017 and won only two: best music video for “Formation” and best urban contemporary album. Adele, meanwhile, won the big awards, including album of the year — tearfully accepting it while bemoaning the fact that she herself believed Beyoncé should have won: “I can’t possibly accept this award, and I’m very humbled, and I’m very grateful and gracious, but the artist of my life is Beyoncé.”

No, it didn’t take a supernatural soothsaying ability for me to predict what would happen at the 2017 Grammys. But, as often is the case, history is the greatest fortuneteller. And history tells us that black artists get relegated to minor awards and categories reserved for black or “urban” artists while everyone else gets to enjoy the biggest trophies of the night.

The three biggest Grammy Award categories are album, record and song of the year, and the black win-loss record in these categories is strikingly abysmal.

Pharrell’s record of the year win with Daft Punk in 2014 for “Get Lucky” and Beyoncé’s 2010 win for song of the year for “Single Ladies” are the only black award winners in any of the three top categories since 2006. There have been only three projects from black artists to win album of the year in the 21st century. Only one of those albums, Outkast’s Speakerboxxx/The Love Below, is from black people under the age of 65, the other two being Herbie Hancock’s 2008 award for River: The Joni Letters and Ray Charles’ 2005 album Genius Loves Company. Lauryn Hill is the last black woman to win a Grammy for album of the year, for The Miseducation of Lauryn Hill in 1999.

When black people do win Grammys, it is in separate-but-equal categories that signify the awards are essentially for black artists. Beyoncé has won 22 Grammys in her career, including as part of Destiny’s Child, and only four of those Grammy Awards don’t have the words “R&B” or “Urban” (or both) in them. She has come away empty-handed on the 21 other nominations that don’t have those words. Jay-Z, Kanye West, Lil Wayne and Drake have not won any awards outside of the “Rap” category. 2Pac, The Notorious B.I.G., Nas, Snoop Dogg, Ice Cube and Public Enemy have never won Grammys in any category.

The award shows owe their popularity, ratings and attention to the black artists who end up with just participation trophies in the end.

Simply not winning these awards would be travesty enough for black artists, but the way the shows are promoted only adds to the insult. Every year, black artists, boosted by their high nomination totals, are given prominent performance spots in the show, only to get shut out of the big awards.

In 2018, Lamar was the buzz artist with seven nominations for his DAMN. album. He was marketed ahead of time as the performer to open the Grammys. He stole the show but won Grammys only for rap categories, which was similar to 2016, when he was nominated 11 times and didn’t win anything but rap performances despite another electrifying performance.

Black artists such as Lamar, Beyoncé, Jay-Z and West have either outright led or tied for the most nominations every year since 2012 (Eminem led with 10 in 2011) and been championed for those accomplishments, then put on monumental performances under the auspices that this could be their year, only to be ignored when it was time to hand out the major trophies.

The award shows owe their popularity, ratings and attention to the black artists who end up with just participation trophies in the end. And that begs the question: Why do black artists even bother with the Grammys? I’m not the first to ask this question, as some have flirted with boycotting the program for decades. Will Smith and DJ Jazzy Jeff led a boycott of the 1989 Grammys when it was announced that no rap awards would be televised. “You go to school for 12 years,” Smith said at the time. “They give you your diploma, and they deny you that walk down the aisle.”

In 1991, as MC Hammer was winning a Grammy for best rap album, Public Enemy was choosing to boycott for the same reasons Smith and Jeff did two years before. In 1999, Jay-Z began a boycott of the awards for DMX’s It’s Dark and Hell Is Hot not getting nominated. In 2014, Macklemore posted a public apology via text message to Lamar for preposterously beating the Compton, California, MC for best rap album.

And finally, a few months ago, Jay-Z seemed to send out a hint that he would be reigniting his disdain for the Grammys: “f— that 0 for 8 s—,” in response to him getting shut out this year. Maybe his statement is the beginning of a sentiment that neither he nor Beyoncé needs the awards. And he’d be absolutely right. Because the truth is evident: Neither black people nor black art needs the Grammys.

Lemonade is a transcendent piece of art that gives black women in particular the type of joy and affirmation that only black art can give them. Her self-titled album from 2013 revolutionized the way artists put out music. Lamar’s first three albums are the type of consciously aware rap music that fans dreamed could top the charts one day.

Jay-Z is one of the greatest songwriters. Ever. West has produced the soundtracks to the 21st century. Have you seen an Essence Festival crowd sing along to Mary J. Blige? Have you seen entire stadiums and clubs explode when Drake’s music comes on? Do you understand 2Pac and Biggie’s legacies? These artists have impacted the culture, and most specifically black culture, in ways that surpass the validation the Grammys provide.

I understand the desire to be recognized for your art on the same level as counterparts, especially white counterparts. But history tells us that it’s all a waste of time to persuade these voters to give black art its just due. If black people stopped caring about the Grammys, the effect it would have on the legitimacy of the awards would do far more damage than the loss of legitimacy felt from not winning year in and year out. Beyoncé losing out to Adele doesn’t harm Beyoncé’s career. It just makes the Grammys look silly because the black artists and culture that follow them hold the power of public opinion over an increasingly archaic award.

So feel free to be happy that Lamar, Drake or Cardi B have the potential to win a ton of awards in February, or that we may get our first black woman this century to hold up an album of the year award to close the show. But just know that it’s also OK to accept the brilliant art for what it is without giving increasingly meaningless awards the time of day. It deserves your attention less and less after every unjustifiable snub.