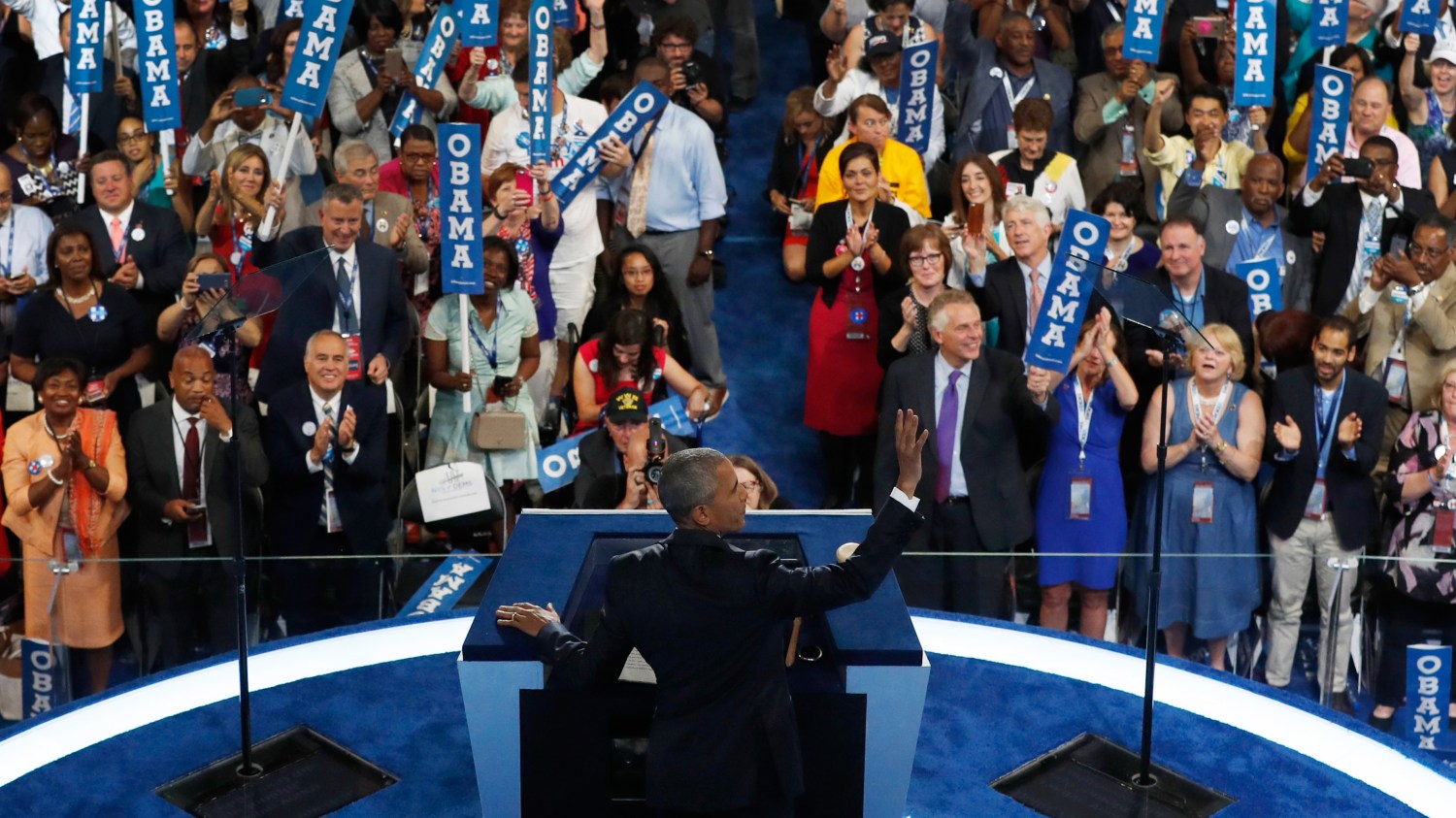 Bidding goodbye to a historic president

Black Democrats hope the Obamas will keep up the fight, even out of office

On the final day of the Democratic National Convention, Philadelphia resident Christinetta Thompson teared up outside a meeting room at the Philadelphia Convention Center. She wished her grandmother had lived to see Hillary Clinton nominated for president. But she was also thinking about saying goodbye to the Obamas.

“I watched my daughters grow up watching them,” said Thompson, a manager for a health care system. “They left a great legacy and a great feeling of pride.” They showed the country a strong black family and Thompson believes that President Barack Obama will “still have an active role in our government and our daily lives. I don’t think he’s just going to disappear from the public light.”

Or at least that’s the fervent hope among many black Democrats here. They’re looking forward to a new administration full of historic firsts. But they’re also beginning to come to terms with saying goodbye to the current historic president who’s like, they say, won’t come again in their lifetime.

It’s been a subtext of the entire week.

“Centuries from now, all kids will know his name,” said Sen. Cory Booker (D-N.J.). “Not everybody knows who Rutherford Hayes is.” But Obama is “an epic president, not just breaking through, but enduring assaults on the presidency that we’ve never seen before. Like we never saw a president heckled during the State of the Union address and he’s endured that and come out with a list of accomplishments that’s pretty profound.”

Kwasi Asare, a Philadelphia native who lives in New Orleans and owns interests in several media technology firms, sponsors programs on innovation and public policy. Asare said Obama’s relatability is one of the things he’s most going to miss.

“I was in the stadium the night he accepted the first nomination,” Asare said. “I had never felt more American in my life. Eight years later, it’s a little bittersweet.” He’s excited about Clinton and what he thinks she brings to the table, but calls the Obamas “the coolest president and first lady” ever.

He cited Michelle Obama’s Carpool Karaoke last week with The Late Late Show’s James Corden, which has been viewed more than 34 million times on YouTube, as “the most entertaining thing I’ve seen in weeks. Missy Elliott was there. There are only so many people who can pull that off,” and not look ridiculous. If anything, it made her “even more likable. She’s even more approachable. She’s even more human.”

“Nancy Reagan was on this pedestal talking down to everyone about not doing drugs, she never tried to actually relate to young people. It was all about her telling us what to do. Michelle, not that she’s our peer, but she likes hip-hop. She can dance. She’s more like us than any first lady we’ve ever had,” Asare said.

As for President Obama? He’s “going to do a 64-team NCAA bracket every year, he’s going to shoot hoops with Steph Curry, he’s going to talk to the guys from ‘Hamilton’ and do a live action video with them,” Asare said. He calls a video, released after April’s White House Correspondents Association dinner, of Obama planning his life postpresidency – including going to the Department of Motor Vehicles to get a new license – the funniest thing ever. “Barack Obama could walk in here right now and shake everybody’s hand and be like, ‘Oh, what’s up, dog?’ and, like, give them dap, you know? That’ll never happen again. At least not in my lifetime.”

As he contemplates the end of the Obama era, Jelani Cobb, director of the Institute for African American Studies at University of Connecticut, said his mind goes to the vision versus the political reality. “We couldn’t conceive of the limitations of a black president until we had one,” he said. “It was a step forward in democracy for him to be elected, but he was also hamstrung in all things that were specifically African-American.” The nation has “seen a titanic backlash in response to [the Obama] presidency,” Cobb said.

In a June interview with NPR, Obama responded to criticism that he had not done enough to specifically address the problems of poor and working-class blacks and to reform the criminal justice system. Cobb speculated that when the president is out of office, he’ll likely be more free to talk about a lot of the things he cares about. “A bitter irony,” he called it.

At a downtown watch party for the president’s Wednesday night speech, friends Andrena Crockett, a federal government consultant from Washington, D.C., and Staci Erwin, a Philadelphia attorney, noshed on finger food and talked about what they’d miss most about the Obama White House. For them, it was his grace under fire.

“I think there’s a lot of pride in seeing how well he has maintained himself and his composure through these eight years,” Erwin said. She cited the fierce Republican resistance he’s faced in both houses of Congress. “From the very outset, they said that there would not be a second term and he has accomplished things I don’t think they imagined that he would over and above the resistance that he met,” she said. “In that alone, there’s a sense of pride.”

But despite his accomplishments and the symbolism of having had a black family in the White House, the friends agreed that Obama will have to keep working once he leaves if he wants his legacy to endure.

“It’s the end of his presidential era, but I think that he has built a platform to continue on after he gets out of the White House,” said Crockett. Like Cobb, she said that he might be able “to do more because he doesn’t have the constraints.”

They want him to continue to work on gun control, ending mass incarceration and racial inequality and continue his My Brother’s Keeper initiative on behalf of black and brown boys. They want Michelle Obama to continue to fight for a better American diet and health issues.

“His wife is probably going to demand that he take a little break, but we’ll be coming out of an election and we don’t know who is going to be president,” said Crockett. “I think whether he rests his feet and listens to his wife and takes a vacation will be determined by who wins the election.”

There’s still work to be done, they said. And though a historic era is ending, one that has meant the world to a world of people, the hope here in Philadelphia is that the Obamas will roll up their sleeves and keep working.