Four years ago, Detroit native Mimi Miller had never been in the ocean. Now she’s a devoted bodyboarder, surfer and volunteer for the Black Surfers Collective — a group that, according to its mission, raises cultural awareness and promotes diversity in the sport of surfing through community activities, outreach and camaraderie.

On Aug. 12, you could find Miller standing on the shoreline of Los Angeles’ Santa Monica State Beach, clapping and cheering on newcomers who took part in the collective’s monthly free lessons to introduce black people to surfing, called Pan African Beach Days.

Being active in the L.A.-based collective, with its 799 members on Facebook, has allowed her to do something she enjoys in a supportive, vibrant atmosphere: “I love the community,” she explained in between chasing down stray boards and yelling “Good job!” to kids and adults alike. 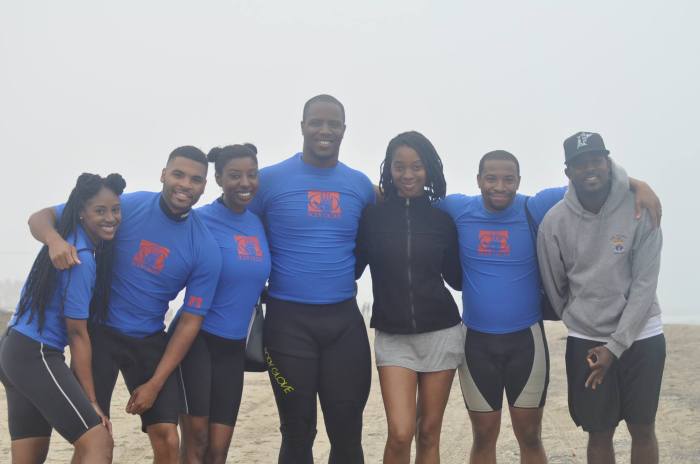 About 111 people signed up for the Aug. 12 event, although the collective cannot safely accommodate such a large number. Still, a good 40 people, ranging from young kids to middle-aged participants, got training and coaching. Most did not have experience surfing.

Miller and the rest of the collective’s members are part of the proud if lesser-known tradition of black surfing, which some would argue goes back to native Hawaiians (descendants of Polynesians), who are credited with inventing the sport in the first place. Among the legendary surf icons are Montgomery “Buttons” Kaluhiokalani, a black Hawaiian whom Surfer magazine called “the father of modern day surfing.”

L.A. has its own lore, beginning with black surf pioneer Nick Gabaldon, who frequented the Inkwell Beach in Santa Monica in the 1940s, where black beachgoers congregated during segregation. Also, the late Dedon Kamathi, a radio host and onetime Black Panther, was a surfing devotee, as was police abuse victim Rodney King.

Founder and co-president of the Black Surfers Collective, Greg Rachal is a former skateboarder who found his way onto a longboard early on. “I’ve been in and out of the water all my life, since I was 13,” he said.

Rachal and his wife, Marie, are beach enthusiasts and a vital presence in the collective, which organizes camping and surf trips and takes a leadership role in an annual tribute to Gabaldon.

Rachal’s son, Greg Jr., 15, volunteers on the collective’s surf days because he likes giving back. He is on his school’s surf team, which sometimes comes as a surprise to his white classmates. Greg Jr. would like to see more African-Americans in surfing. Until then, he said, he enjoys defying stereotypes.

He’s not alone. Waterman Michael Brown Parlor has been surprising people with his prowess in lifeguarding, surfing and sailing since he was a college student in South Carolina in the 1970s. He’s retired from surfing and mentors female surfers in competitive events, believing girls don’t get the respect they deserve in the sport. He spent Pan African Beach Day encouraging newbie surfers and taking pictures for his Facebook page devoted to surfing.

Pan African Beach Day was launched a few years ago because too few black people in L.A. get to the beach, and they don’t always have a background in swimming to enjoy the water, Rachal explained. He credited the Surf Bus Foundation, a nonprofit that promotes ocean sports and safety in L.A., for helping make Beach Day a success by supplying the boards, instructing students and providing additional volunteers. Beach Days are open to anyone, although most participants are people of color.

Before they took to the waves Aug. 12, participants gathered on the beach for a talk about ocean safety and played some games that got them into the water. Then it was time to plop themselves on boards laid out in the sand, where they learned how to position their arms and feet and practice their “pop up,” the tricky move from prone to upright, ending in a stance with knees bent and arms extended.

After some popping up, volunteer instructors such as Rachal and other members of the collective took participants into the water, finding the right wave and giving them a push forward. Some newcomers rode the boards on their bellies, zooming into shore with their arms extended, while others proved agile enough to stand up, maintain balance and ride in — always an exhilarating moment for a student and instructor. Waves were small, and wipeouts were minor.

Participant Pierre Scott had attended a few Pan African Beach Days before and was having a good run, standing up and even angling into the barrel of the wave, not just riding into shore.

“I love it. It’s something I’ve always wanted to do,” Scott said.

“It’s a hype experience,” said Garry Maxwell, who chuckled about the language of surfing, explaining that “I’m stoked.”

Devin Waller was a beginner and felt a bit nervous. But she felt the stoke the first time she stood up on the board.

“It was awesome,” Waller said after the session ended, depositing her board on the sand. “Heck yeah, I’m going to do it again.”