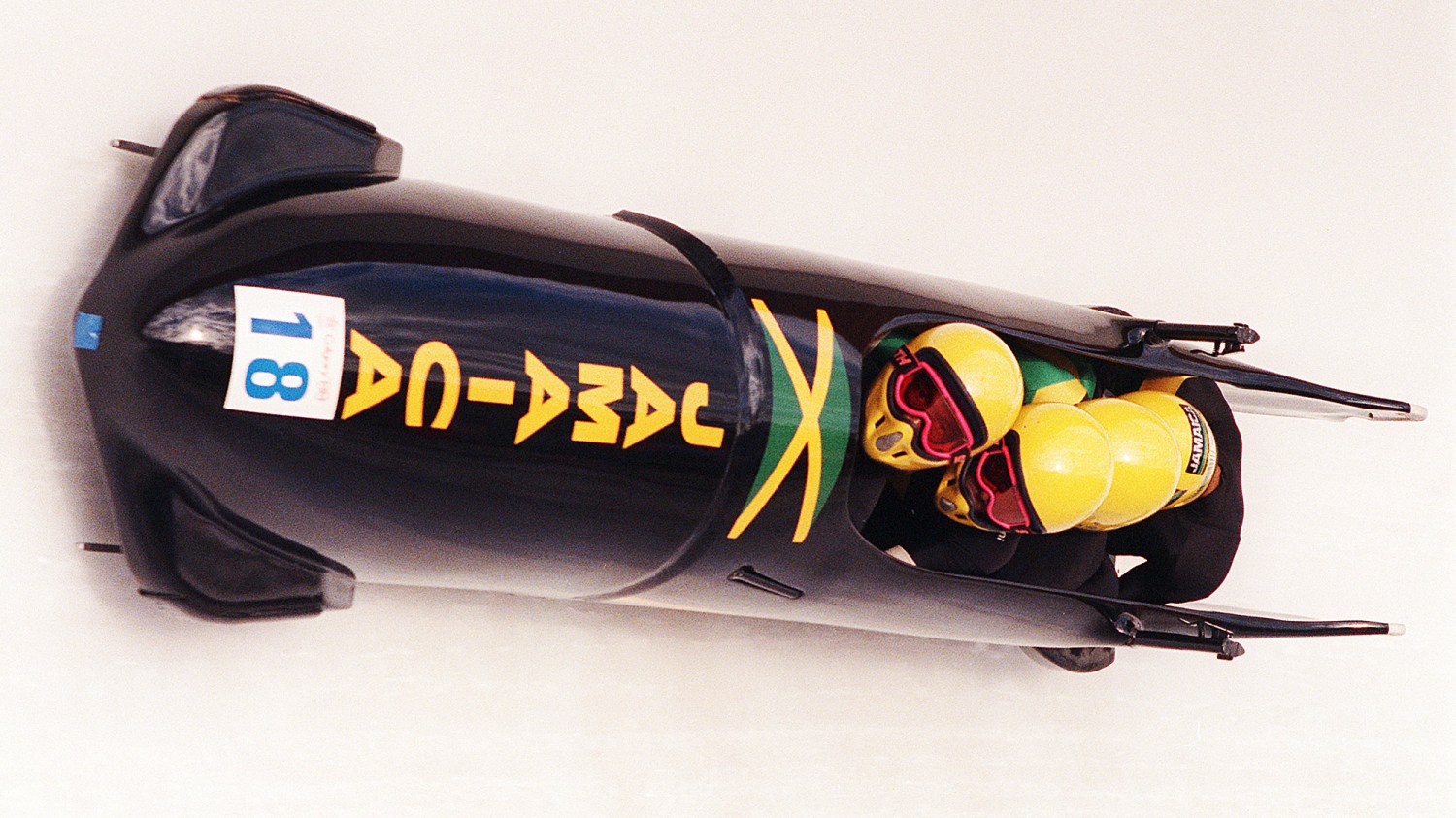 The Jamaican 4-man bobsled speeds down the track during the first run of the men’s competition 27 February 1988 at the Calgary Winter Olympic Games. MARK CARDWELL/AFP/Getty Images

Devon Harris’ Jamaican accent is thick, his cadence measured and thoughts clear. One minute he’s part motivational speaker – dropping inspirational one-liners – and the next, he’s a quick-witted “Yardie” with a hearty laugh characteristic of his homeland’s “every’ting cool, mon” vibe.

Raised in one of the most violent slums of Kingston, Jamaica, Harris graduated from the prestigious Royal Military Academy Sandhurst in England. He later served as an officer in the Jamaica Defence Force, the country’s combined military, consisting of the Army, Air Wing and Coast Guard.

But the reason you know Harris isn’t because of any of that. You know him because he is one of the original members of Jamaica’s historic first bobsled team, which competed in the 1988 Winter Olympics in Calgary, Canada. Dudley Stokes, Chris Stokes, Michael White, Freddy Powell and Caswell Allen made up the rest of the squad. The team’s exploits inspired the 1993 Disney blockbuster movie Cool Runnings.

Don’t go racking your brain to figure whether Harris’ character was portrayed by Leon, Doug E. Doug, Rawle D. Lewis or Malik Yoba. While Cool Runnings is generally regarded well, it only got part of the actual story right.

Harris also competed in and was team captain for the 1992 Winter Games in Albertville, France, and the 1998 Games in Nagano, Japan.

Though Jamaicans around the world still cringe at an American cast attempting Jamaican accents – Lawd have his mercies … Doug E. Doug was particularly bad – the film managed to get one important thing right, Harris said.

“Cool Runnings was a good human interest story that managed to depict the spirit of the team as underdogs fighting to overcome. It really spoke to how us Jamaicans see ourselves – as ‘big deals’ in terms of just being very confident in our abilities to accomplish those things that people think you shouldn’t even attempt.”

With the success of Cool Runnings worldwide, surely the movie was supposed to start a movement throughout the island, converting a throng of youths with decorated pushcarts to dream of Olympic glory. But that didn’t happen, Harris said, despite the film being the “16th highest grossing film in the year of Jurassic Park, which broke all kinds of records.”

According to multiple sources, Cool Runnings earned more than $68 million in the United States alone, and grossed over $154.8 million worldwide. None of the original members received royalties; neither has Jamaica.

“As a B movie, which Cool Runnings was, it made a ton of money – whole heap of money,” Harris said, his Jamaican accent coming through. “We were supposed to get royalties from the movie, but Hollywood … Disney said the movie didn’t make a profit. I was just in Austria in December flipping through the channel and what do I see? Cool Runnings. I’ve been to Japan and seen the movie on TV, so the movie didn’t make a profit, so … wink, wink, so no.”

But Harris isn’t bitter – not even close. Having lived in America since 1992, he said the bobsled bug never left him. It has given him a platform on which to speak, having morphed himself into a sought-after motivational speaker, sharing his life story and lessons learned from his experiences.

“I would not say [Cool Runnings] started a movement; it created an awareness of bobsledding in Jamaica,” explained Harris, who has authored three motivational children’s books.

“Bobsledding is not an experiential event in Jamaica. We all grew up running track and playing futbol and cricket. We fully understand that; it’s our DNA. So having the movie – not just in Jamaica but across the world – it really immortalized us, but it also gave our story a really long life. I’ve met so many people who grew up on the movie.”

Harris, in recent years, has led efforts to build on the momentum of Cool Runnings to nurture and develop the next generation of Jamaican bobsledders.

“Right after the 2014 Games, I truly took over the running of the program – starting from scratch,” he said. “We have been focused on finding the tracks in North America and we’re also looking to expand the program into skeleton, the sport where you go headfirst.

Just as that original ’88 team had no business having Olympic aspirations – not to mention ice or proper equipment – Harris’ effort is once again dogged by a lack of funding and support. But he has kept his plans afloat with fundraisers, private donations, even his own credit card.

“I want to really build a strong foundation,” he said. “I hear people ask, all the time: How can Jamaica have a bobsled team? My position is, when we’re done building this thing, people are going to be asking: How can Jamaica create a dominant bobsled team? I’m not trying to create an overnight sensation. We have been there, done that. We have competed in five Winter Olympics as a nation; my goal is now to win five as a nation.”