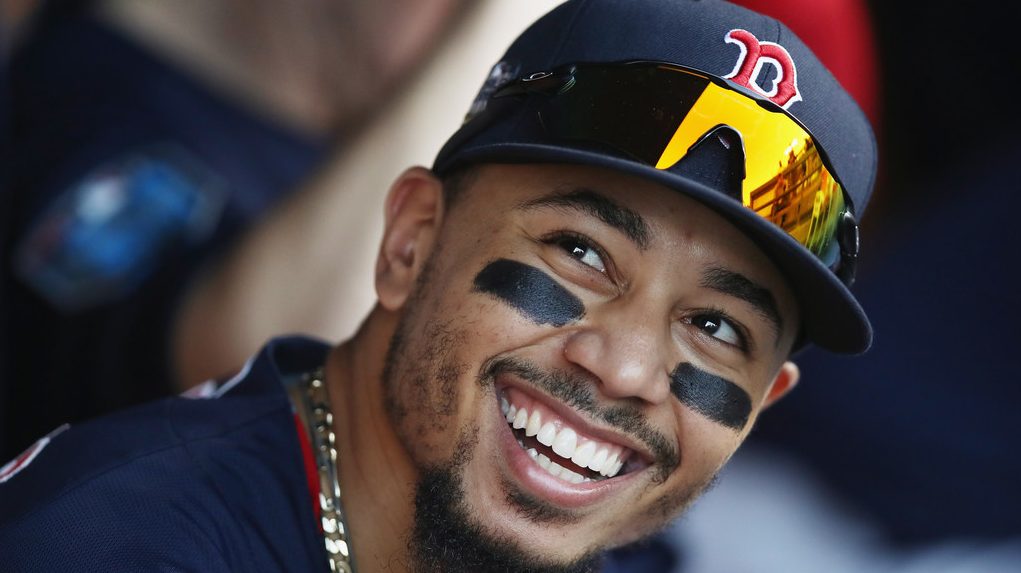 Mookie Betts of the Boston Red Sox in the dugout before Game 3 of the 2018 World Series against the Los Angeles Dodgers at Dodger Stadium on Oct. 26 in Los Angeles. Ezra Shaw/Getty Images

Betts can make a mark on Boston, help grow the game for kids of color and, more largely, the country overall

Leading off the bottom of the eighth inning in Game 4 of the American League Championship Series, Tony Kemp stepped to the plate in a big spot. The Houston Astros were down 2-1 in the series, 8-5 in the game, and needed to keep their World Series hopes alive.

Kemp laced a single to right field off Boston Red Sox closer Craig Kimbrel. Trying to make a play, he dug to stretch it to a double as the ball took a relatively slow bounce down the line. As a left-handed batter facing a right-handed right fielder, Kemp knew he might have a slight advantage getting an extra step to get into scoring position.

But he should have known better.

Because that right fielder was none other than Mookie Betts, the kid Kemp first met on a high school baseball field in Nashville, Tennessee, when they played against each other as teenagers. The Mookie Betts who didn’t want to follow Kemp to Vanderbilt to play college ball because he didn’t think he’d be able to beat out his travel ball teammate. The Mookie Betts who had converted from second base to outfield, just like Kemp.

The Mookie Betts who was named the American League MVP on Thursday.

Betts fielded the ball, spun around and threw an absolute pea to second while barely spotting his target. Xander Bogaerts banged the tag right on Kemp’s helmet while he was extended in a headfirst slide, and just like that it felt like the Astros’ season was done. Kemp took a second before getting up, dropping his head in regret of his decision before jogging back to his dugout.

“To see the strides that he made, the Gold Gloves, the plays,” Kemp said last week in Nashville. “You know, throwing me out during the LCS was unbelievable, and I can’t even be mad at it.”

Remind me again why Mookie Betts isn’t a household name? If MLB counts its lucky stars, the onetime Tennessee recruit can pull off the impossible: make an indelible mark on the Boston Red Sox franchise, the last team in Major League Baseball to integrate, and help grow the game for kids of color and, more largely, the country overall.

The skills speak for themselves. A legit five-tool guy, Betts led the league in wins above replacement over the Los Angeles Angels’ Mike Trout by a little more than a half-game. For those of you who want more rudimentary stats, he was tied for the league lead in runs scored (the most underrated stat in all the game, for my money), was 12th in hits and third in doubles, and was the overall batting champion. (He can also dunk a basketball — he’s 5 feet, 9 inches tall — and is a pro bowler. He’s got skills.)

In high school, he was a standout baseball and basketball player. After nearly going to college to play on the diamond, he was drafted early enough by Boston to persuade him to go pro. Now he’s an All-Star right fielder, one of the best in the game, because he got blocked — twice — when it came to playing his natural position.

First, he decided to switch colleges, because had he gone to his hometown school of Vanderbilt, he’d have been playing behind Kemp, who was SEC Freshman of the Year playing second base. Betts didn’t think he had a shot to play at all. After committing to Tennessee instead, he ended up pulling out and into the Red Sox organization.

Wouldn’t you know it, two years later, Dustin Pedroia signed an eight-year, $110 million contract, effectively blocking Betts again from advancing. Ironically enough, it’s a relationship that has grown in Boston. That said, what do you do with a fifth-rounder whose athletic ability is off the charts?

You teach him a new position.

Position switches aren’t entirely out of the ordinary. They happen all the time for aging players, or young athletes who have too much talent in one realm to waste doing something ultimately less useful to a ballclub, or so the theory goes. Bryce Harper was once a catcher, to give you an idea of how these things can go.

“Mookie Betts is like the perfect combination of an extremely athletic player who is a good baseball player,” said ESPN analyst and six-year MLB outfielder Chris Singleton. “There have been times where you’ve had really athletic people enter the sport, and it seems like because of success they had at football or basketball or whatever that it was going to automatically translate to baseball, and it doesn’t always do that.

“To see how athletic he is, but yet mechanically sound and have the instinct of a person that just maybe you would think only played baseball in their life, that’s what’s impressive to me.”

MLB Network analyst Harold Reynolds, a two-time All-Star, three-time Gold Glove recipient and the only player other than Rickey Henderson to lead the American League in steals in a season in the ’80s, also has high praise for Betts. “Had he had a chance to play [the position] in the big leagues, we’d be talking about an All-Star second baseman. He’s that good.”

Reynolds added: “There’s probably nothing on the field that [Betts] can’t do.”

Betts is a genuinely cool dude. When the Astros visited Boston for a September series, he surprised his old friend Kemp by taking him to a Drake concert, where they met the rapper afterward. After Game 2 of the World Series, he distributed food to the homeless outside of the Boston Public Library near the ballpark. And he swings an AXE bat, for Pete’s sake.

He’s also a Nike Jordan Brand guy. For baseball, there are only about a dozen or so athletes under the imprint. Betts has been with them since 2015. Whatever you want to say about Jordan brand branching out into seemingly every sport imaginable, at least Michael Jordan played professional baseball. (And if you need proof the Jordan Brand baseball guys are legit, never forget when Dexter Fowler showed up with the Chicago Cubs to the White House and blessed President Barack Obama with a pair of POTUS-customized Jordan 4s.) Betts’ locker in Boston is stacked with various player-exclusive model cleats and apparel.

After Game 1 of the World Series, he donned glasses during a postgame scrum. He had a gold chain over his black T-shirt with sweats and a camo backpack. He looked like a college kid who actually goes to class and does all his homework.

Beyond that, though, he gets it. He knows how to have fun. No moment was that better demonstrated than in this year’s Grapefruit League, when he was mic’d up during a game while playing right field. Behold this incredible moment. Mind you, he was having a conversation about bowling when this goes down. It’s perfection.

The funny thing is that despite Betts’ reputation as this super humble and easygoing guy, just doing everything for the love of the game — Oh, that Mookie, look at that smile. Oh, that Mookie, he makes it look so easy — there’s more to it.

“I’m constantly working. It’s not all just God-given,” Betts said. “Obviously, he did bless me with everything I have, but I also do work really hard, probably more than others to try and sustain what I have. People may not know, but I honestly am, probably, I know it’s kind of weird to say, but I’m probably one of the more hard workers I’ve ever seen or been around.”

Oh, and how he looked back on his spectacular year? He didn’t hesitate.

“I ended up surpassing the kind of goals I set, so I would give myself kind of an A for the season,” he said, nodding to himself. “I mean, I did a pretty good job.”

Is next season the moment Betts makes the jump from baseball star to so-called sports hero? There’s a complex matrix of things that would have to happen for that to go down, but it’s not impossible. He could easily hit the NBA All-Star Celebrity Game, Kids’ Choice Awards circuit on top of his Professional Bowlers Association duties and make an actual concerted effort to be America’s Next Top Mookie.

“In order to really get that kind of love and exposure, he’d have to open himself to do more things beyond just baseball,” Singleton said. “You know 10, 15 years ago, when we didn’t have as many things to compete with in terms of Netflix, YouTube, Facebook, Instagram. There’s a lot of competition for authentic eyeballs.”

What we all know is that baseball could use it. Betts isn’t some larger-than-life Ryan Howard or Jason Heyward type. He could market anything from sports cars to pancake mix. Lord knows baseball could use a little bit more of that personality we saw from him in spring training in its national profile.

Funny thing is, no one wants to press it, but everyone wants it to happen. Tony Clark, executive director of the Major League Baseball Players Association, is as aware of that as anyone. Standing on the field before Game 1 at Fenway Park, he beamed about the Red Sox outfielder.

“Our entire game and our industry is better with Mookie being here,” Clark said. “Whether that’s on the field or that’s off the field. Mookie represents all that’s good with our game, and he represents what’s been great about our history. What Mookie can do on a field, what he brings to the ballclub, even just as a fan from the outside looking in, is something our game desperately needs, has always had and hopefully is going to have more of moving forward.”

Betts’ blackness is definitely a part of that. “To be quite honest, he represents a community that isn’t very well-represented in our game. As a black former player, you appreciate him,” Clark said with a smile. “The burden that he’s carrying from the standpoint of the group that he represents. And you hope that others are watching.”