Largely overlooked in high school, the HBCU Player of the Year has his eye on the CIAA championship

Not every football player gets to shine. Some don’t have the work ethic or talent. And some are in programs that don’t showcase their ability.

Bowie State quarterback Amir Hall faced some of those challenges in high school. But once he got his chance at the next level, he became one of the top quarterbacks in NCAA Division II.

“I’m a true believer that everything happens for a reason,” said Hall.

The 6-foot-4-inch Hall started his high school career at Bowie High School, just a nine-minute drive from the Bowie State campus. But after two years, he decided to transfer to another school in hopes of finding a better program and more playing time.

Hall found just that in Riverdale Baptist, a private school in Upper Marlboro, Maryland. The Crusaders compete in the Capital Area Football Conference (CAFC), which includes private schools in the Washington metropolitan area.

“He wasn’t a highly recruited kid, didn’t have a lot of stats from a high school standpoint, but he showed he had the necessary skill set to get where he is today.” — Damon Wilson

Hall started both of his two seasons with the Crusaders, leading them to one undefeated season, a 19-2 overall record and back-to-back CAFC championship appearances.

That wasn’t enough to get him looks from big-time college programs. Riverdale Baptist ran an option offense that rarely allowed Hall to throw the ball.

Even with the lack of stats, Bowie State head coach Damon Wilson saw enough in Hall to know what kind of player he could be.

“We saw a kid that was 6-4. A kid that was smart, athletic and came from really good family,” said Wilson, who is in his 10th year as Bowie State’s head coach. “He wasn’t a highly recruited kid, didn’t have a lot of stats from a high school standpoint, but he showed he had the necessary skill set to get where he is today.”

During his freshman year, Hall watched three different quarterbacks start for the Bulldogs, who earned a berth in the Central Intercollegiate Athletic Association (CIAA) championship game and the NCAA Division II playoffs.

Hall made his college debut in the Bulldogs’ 51-29 playoff loss to Assumption College. In Bowie’s last drive, Hall scored his first collegiate touchdown on an 8-yard run. From that series, offensive coordinator Moses Ware knew Hall was special.

“There were some throws that he could make and, with his understanding of protections and concepts at that point, from a freshman, was far beyond anything we’ve been used to here at Bowie State,” said Ware.

The Amir Hall era officially started after incumbent starter Nyema Washington went down with an injury before the first game in 2016. Hall finally got his chance to display his talents, and it paid off for him big-time.

He threw for more than 3,500 yards, accounted for 40 touchdowns (with only four interceptions) and led the Bulldogs to a second straight berth in the CIAA championship game in 2017.

Although his nickname is “Showtime,” Hall is more impressed by what his play means for his school. “It means a lot. Just all the time and effort I put in to take this university to the next level, not only for me getting the recognition but for the school as a whole and putting Bowie on the map,” said Hall.

His teammates are impressed not only with Hall’s stats but also with his ability to lead the offense.

“It’s like having a teammate and a coach on the field at the same time,” said senior running back Maurice Williams. “Playing beside him, it just takes you to another level, like you gotta play like Amir Hall.”

“I told God before the season no matter how it gets done, whether I throw for 1,000 yards or 2,000 yards, all I wanted to do is bring this school a championship,” said Amir Hall.

In Hall’s junior year, Bowie State hosted its first NCAA Division II playoff game and broke game and seasonal records, and he was named the Black College Football Player of the Year. 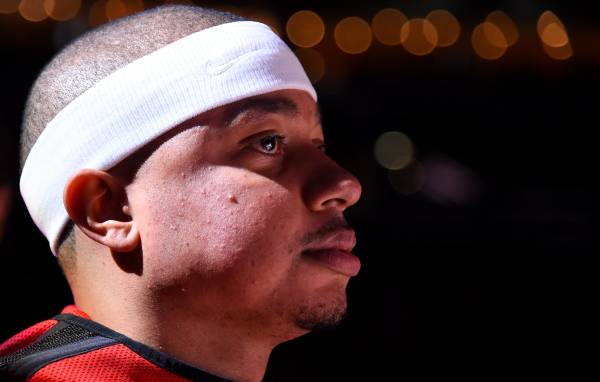 Although the accolades are great, the one thing missing is a championship.

“I told God before the season no matter how it gets done, whether I throw for 1,000 yards or 2,000 yards, all I wanted to do is bring this school a championship,” said Hall.

With three games left in the season, Hall may be on his way to accomplishing his ultimate goal.

Isaiah George is a senior multimedia journalism major from Temple Hills, Maryland. He's a reporter for BearTV at Morgan and is a fan of all the major Washington, D.C., sports teams.