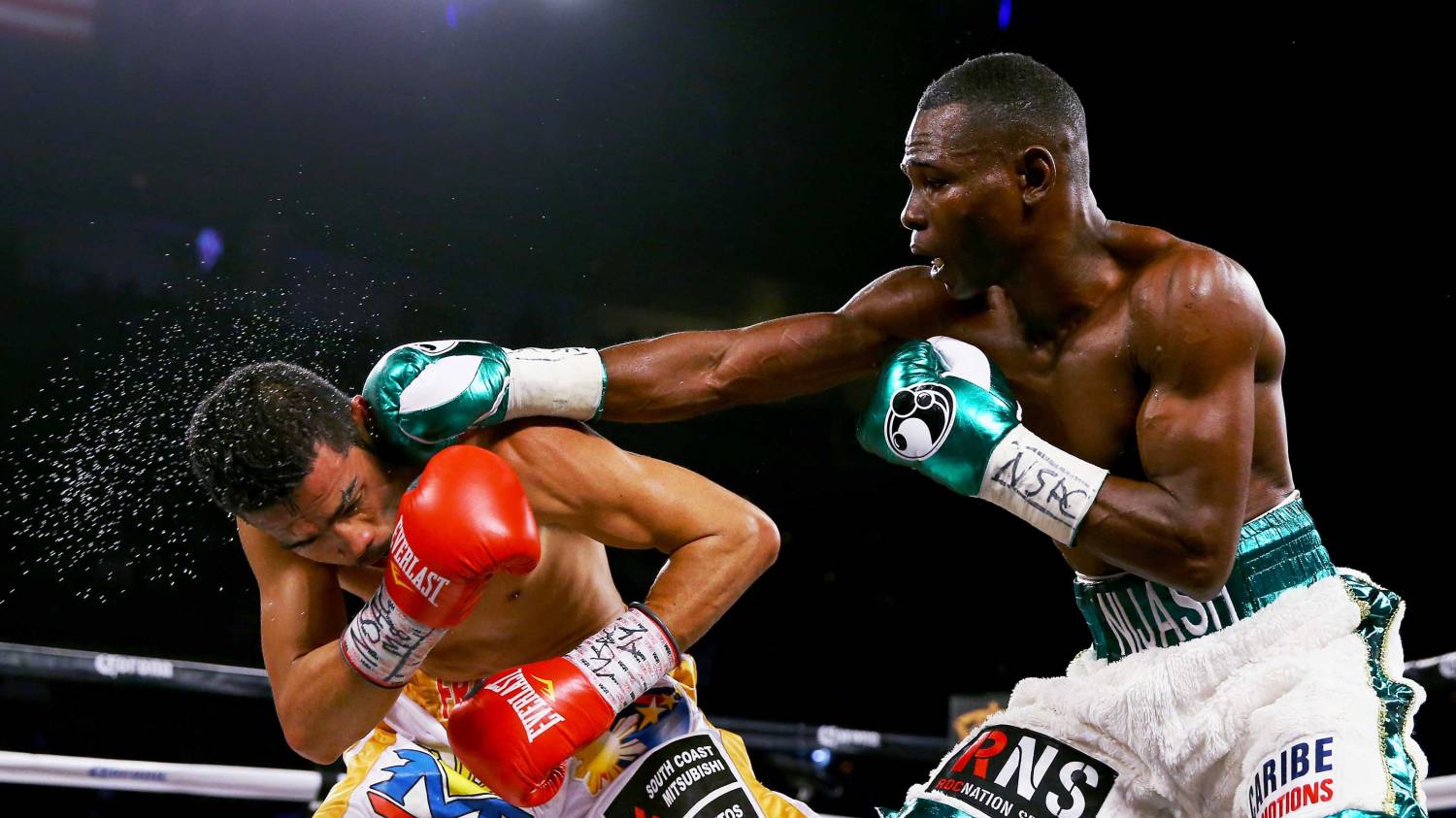 Guillermo Rigondeaux throws a right to the face of Drian Francisco during their junior featherweight bout at the Mandalay Bay Events Center on November 21, 2015 in Las Vegas, Nevada. ( Al Bello/Getty Images

Boxer Guillermo Rigondeaux on Cuba, Lomachenko and that ‘boring’ label

Guillermo Rigondeaux is a tactician in the boxing ring. Like a paid assassin, he wastes no bullets. There is one thing that makes this assassin a bit gun-shy — the painful memories of escaping everything he ever knew in his homeland of Cuba.

Anytime the subject of Cuba comes up, he keeps people at bay with his verbal jab.

Translation: “We don’t speak of those things, Champ. We don’t think of that anymore. It was the feeling in that moment. It already happened, it’s in the past. I made the decision and lived with the consequences.”

Sitting on a faded wooden bench in Miami’s famed Tropical Park, he discusses why he loves Miami so much. It’s because it feels like an extension of his homeland in Cuba. Ninety miles away, but worlds apart.

He’s also known as Rigo or El Chacal (The Jackal) by many of his friends and fans. Rigondeaux, who will fight WBO super featherweight champion Vasiliy Lomachenko on Saturday on ESPN, is one of the most decorated boxers in Cuban history. A hero, all while being a pawn on Fidel Castro’s political chessboard.

“When you’ve seen what I’ve seen,” said Rigondeaux, “nothing in the ring can scare you.”

Castro used Cuba’s tremendous athletes and sports to reinforce his political ideologies on the people of Cuba. He created both a literal and figurative show of strength. Nothing emphasized that more than the country’s participation on the world stage in boxing.

In a nation that is deprived of many basic necessities taken for granted in the United States, such as adequate food and hot water, Castro used sports like boxing to inject a sense of national pride.

Three-time Olympic boxing gold medalist Teófilo Stevenson was once held up as a poster child for Castro’s socialist regime. Stevenson famously declined a lucrative multimillion-dollar offer to turn pro and fight Muhammad Ali by saying, “What is a million dollars compared to the love of 8 million Cubans?”

Rigondeaux (17-0, 11 knockouts) had seen enough of the real world to know something was askew.

“I traveled a ton with the Cuban national team. It always made me kind of sad when I would go out and see people dining in these countries, because you could feed a ton of Cubans simply off of the scraps that they would leave behind,” the boxer said. “It was tough to see. Really tough.”

Was that what made him decide to defect from Cuba?

“It certainly wasn’t the only reason I defected, but of course it plays a part. I’m sitting there watching people throw food away and we don’t have anything. I know we won’t have anything, either.”

Rigondeaux has seven brothers, an ex-wife, a stepson and a 15-year-old son on the island.

That teenage son is also training to be a boxer in Cuba.

“You worry as a parent,” Rigondeaux said. “I tell him to stay on the straight and narrow. There are always eyes on you, studying your every move there, no matter who you are. I understand that’s the reality of living there.”

You can see the anguish on his face when discussing his long-distance family. Imagine leaving behind everything you know and love? Not to mention risking your life in doing so.

Rigondeaux weighed all of those factors and decided it was worth the risk.

On July 22, 2007, at the Pan American Games in Brazil, Rigondeaux did not appear for his scheduled bout. Eleven days later, he was taken into police custody and was on his way back to Cuba as a disgraced, failed defector.

“At the 2007 Pan American Games in Brazil? You don’t need to speak of or think about that stuff anymore.”

A jab back at the champ finally landed.

How did you get caught?

“I was in Brazil, and word had spread of my plot to defect. There were photographs of me plotting my next move, and it was over just like that. I was sent back to Cuba,” Rigondeaux said.

In a matter of days, he went from national hero to traitor. All for a taste of freedom.

Rigondeaux was now muted, like the rest of his countrymen. Perhaps even worse: He was dismissed from the Cuban national team by Castro himself in a public scolding.

The same Castro, who had greeted the two-time Olympic gold medalist upon his triumphant return from Sydney and Athens, Greece, stated after Rigondeaux’s attempt to defect, “They reached the point of no return as part of the Cuban delegation in that sport.”

“Betrayal for money is one of the favorite weapons of the United States to destroy Cuba’s resistance,” said Castro. “They were simply knocked out with a blow to the jaw, paid for by American dollars. There was no need for a count.”

After the condemnation at the hands of El Comandante, Rigondeaux was left with only one option: another attempt to defect.

Reports out of Cuba stated that Rigondeaux fled Cuba by boat en route to Mexico. When asked whether he indeed traveled this way, he again hit with his jab, “no, Champ, we can’t talk about those things.”

He still would not explain his exact method of escape from Cuba. He did confirm that he fled to Mexico.

Once in Mexico, Rigo’s travels led him to Laredo, a town just south of the border city in Texas with the same name. He spent a month sequestered in a safe house in the small Mexican town. This home was occupied by 30 defectors and the smugglers who brought him into Mexico and were in charge of getting them safely to the border.

“There were a few boxers like myself, men, women and children of all ages,” said Rigondeaux. “We couldn’t leave. When we arrived, there was enough food, water and supplies to survive the length of our stay.”

It was a business transaction. You paid for the service, and the goods would be delivered from Point A to Point B, moving swiftly.

“They would simply approach you and tell you, ‘Hey, your family paid the bill. Let’s go,’ ” Rigondeaux said. “If they didn’t pay, they’d set you loose on the streets and you were on your own. It was only a matter of time before the authorities caught you and shipped you back to Cuba.”

This encounter sounds like an adventure you only see in a movie. Make no mistake, this was real. It was shocking to see how matter-of-factly he recounted the story. No matter how terrifying this situation appeared, Rigondeaux was simply relieved to be away from Cuba.

“I was at peace. I knew what I had to do. If it meant staying in that house for a month, so be it. Clearly, there were some people who were very afraid.”

Rigondeaux, his housemates and the smugglers hit the road. Carefully navigating through Laredo on their way to the border, his journey to freedom was underway.

“We stopped at few safe houses along the way. We were fed and were able to sleep there. We were treated well. I have no complaints,” said Rigondeaux. “It took about seven or eight days of traveling to reach the border. That group I was with became your surrogate family. We all had to form a bond to ensure we would make it.”

Once he was granted safe passage to the border, he claimed political asylum. Within 24 hours he was on his way to Miami.

Who picked him up?

“Champ, I can’t tell you who picked me up. Time to move on to the next chapter.”

Who wouldn’t want to forget or avoid discussing what he’s been through? He’s hesitant and anxious about giving specific details because of possible retribution toward those who he loves.

His personal life is filled with complexities and scars. Meanwhile, his pro boxing life hasn’t been all roses either. He’s been labeled a boring fighter because of his ability to counterpunch. His defensive style isn’t deemed sexy enough. HBO dropped him. It’s something that clearly irks him. So much so, he is no longer reserved. In fact, the volume rises.

This is where the assassin comes out.

“People who say that [my style is boring] have never stepped foot in a ring before and have never taken a shot in the head. Boxing is an art form. Hit your opponent and make sure they don’t hit you. That’s what boxing is supposed to be.”

You know whose style in the ring can also be considered boring? Floyd Mayweather.

Rigondeaux sees the similarities in their approach.

“He’s a star. He’s the best fighter in the world. I’ve trained at his facility. Our styles are similar. Mayweather throws punches with precision. I do the same thing. I’m not out there to waste energy. I’m out there to punch you in the face. That way it hurts every time.”

Rigondeaux, rightfully indignant about this narrative, believes there is also something else at play.

“If I grew up in this country and could speak English like he [Mayweather] does, I’d be just as popular. I can talk smack in Spanish. You’ve heard it. But it’s not the same. I get that. I think that’s a huge factor.”

Then the champ unloaded. Accusing Latino boxers of loathing their own. Specifically Mexican boxers.

“I also think the biggest issue we have as Latinos in boxing is that we talk poorly about each other. American-born fighters may put on the show in the prefight, but there is a real respect there. American-born fighters have always been very respectful and even supportive of me. The Latino fighters who aren’t Cuban? They’re like, ‘Oh, that guy can go to hell.’ The Mexican fighters hate the Cuban fighters. They keep coming at you in the ring to show how brave they are. You know, Mexican-style. That’s why I’ve knocked all their heads off.”

When it came to talking about Lomachenko, his opponent Saturday night, he prepared for the knockout blow.

“People think I’m crazy because I took on this fight. I moved up two weight classes because nobody in my weight class wants to fight me. I guess I can’t blame them. He [Lomachenko] says he’s going to kick my a–. I just laugh that off. Does he think he has four hands? He has two just like me. He’s a two-time Olympic gold medalist? Great! So am I. We’ll see what he’s really made of on Dec. 9th.

“I was born a champion. I’m a talent. He just has desire. Wait until I knock him upside the head and we’ll see what he’s got.”

How is this guy boring again?

Jorge Sedano is a host on ESPN Radio (Los Angeles), Nacion ESPN and is a SportsCenter contributor.