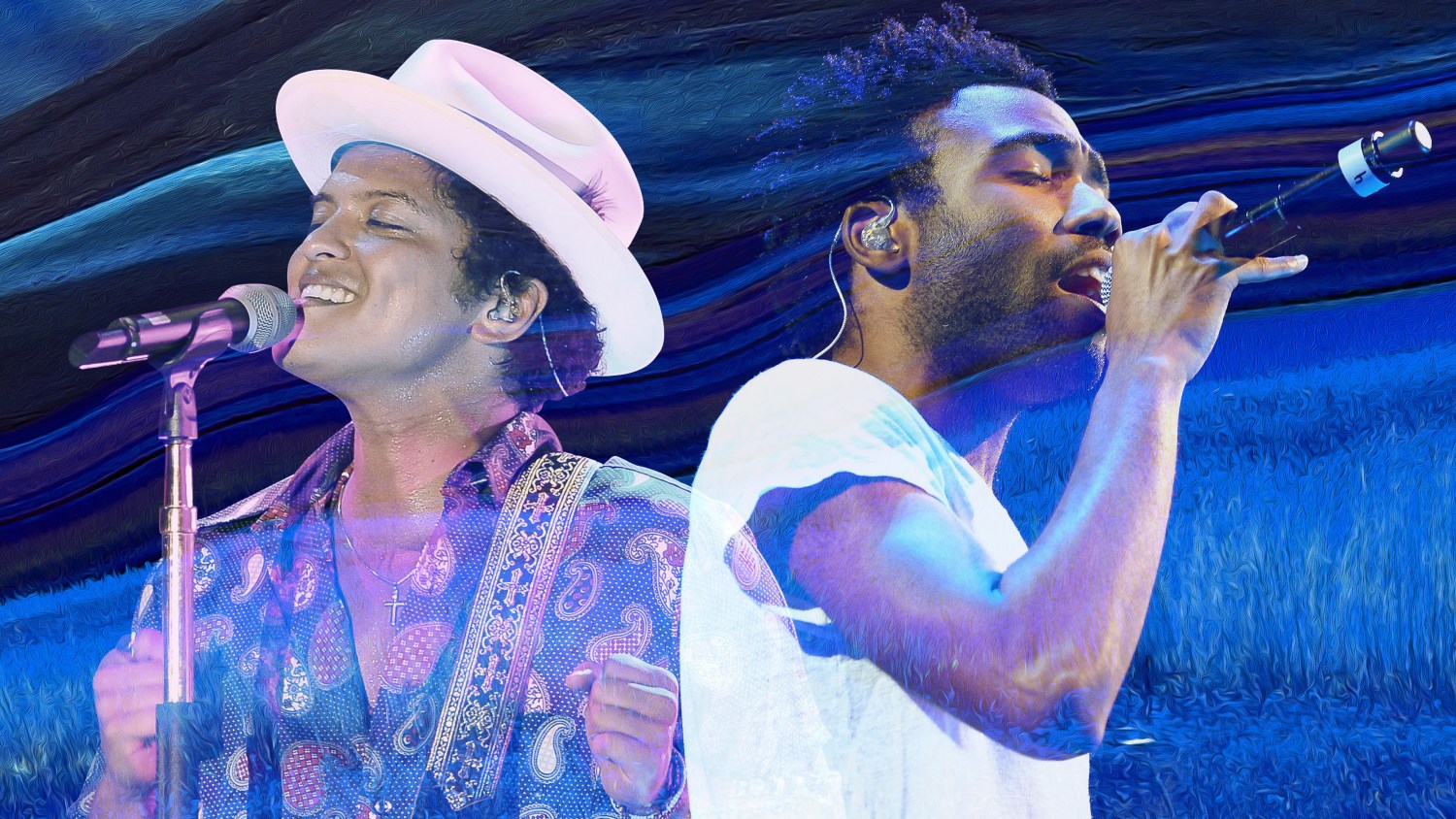 Donald Glover and Bruno Mars boldly stand out as the U.S. swings right

“In these days,” said Nina Simone in 1968, “in these hard times, you must be grateful that you are surviving. That you have your health.” Simone was speaking with an Italian radio station.

Around this same time: Muhammad Ali resided in Chicago, further immersing himself in Islam. He was in the second year of his boxing exile after refusing military induction during the Vietnam War and awaited word from the government if prison time would effectively do what no man had been able to do: knock him out and essentially end his career. Tommie Smith and John Carlos were weeks away from raising their fists on the Olympic medal stage in Mexico City. And black America — really, America as a whole — was still reeling from the assassination of Martin Luther King Jr., and Medgar Evers, and Malcolm X.

Simone revealed the inspiration for her Ain’t Got No, I Got Life from 1968’s ‘Nuff Said! (RCA/Victor) and gracefully transitioned into talking about another song from the same project, Why? (The King of Love Is Dead). Composed by bassist Gene Taylor 24 hours after the murder of King in Memphis, Tennessee, the ode became a haunting soundtrack as uprisings ignited across the country. Simone posed an open-ended question to a country eviscerated over civil and human rights and one barreling toward an election that would alter the course of America. Folks, you’d better stop and think, she crooned, Everybody knows we’re on the brink / What will happen / Now that the King is dead.

“The song is extremely powerful. There’s no conclusion,” she said of the song in PBS’ Blank On Blank. In a time when every slab of concrete was seemingly red with black blood and wet with black tears, she displayed strength, and found vibrancy. “It’s a good time for black people to be alive,” she said. “It’s a lot of hell and a lot of violence. But I feel more alive now than I ever have in my life.”

And here we are, nearly a half-century later.

Fear is one of creativity’s aphrodisiacs. Black despair produces black work that serves as the soundtrack of black time. Black music can move people to action and to protest. In the best and worst of times, black music can be a temporary escape from fear, a space for black anger and contemplation — and black joy.

Donald Glover aka Childish Gambino’s new project Awaken, My Love (Glassnote) arrives Dec. 2. It’s his first since 2013’s Because The Internet, and caps an incredible 2016 career arc, crowned by the runaway success of his Atlanta.

Along with Solange’s A Seat at the Table and D.R.A.M.’s Big Baby D.R.AM., both released in the weeks leading up to the election, Glover and Mars are two of the first artists to release bodies of new music at this critical juncture in American history. The United States is preparing for the onset of an administration that has the entire world on edge. The United States is filled with communities of races, religions, sexualities and disabilities in grave fear for their safety and well-being in the coming months and years.

Not sure if it will help, but the United States needs its own art therapy. And black musical artists have in many ways been providing that for centuries. In the last century, hip-hop groups such as Public Enemy, N.W.A and 2 Live Crew rose to fame amid controversies and battles with the mainstream press and the federal government in the late ’80s. This of course was the decade defined by the crack-cocaine explosion, AIDS epidemic and the cloud that many in black communities knew simply as Reaganomics. And here we are. Everything is different and better and worse and the same.

Glover is a versatile creator who has long woven between musical and acting universes with ease. He’s undoubtedly a candidate for 2016 Man of the Year. In the spring it was announced that he’ll star in the 2017 Spider-Man reboot. Just last month, news of his casting as Young Lando Calrissian in a new Star Wars film slated for 2018 elicited widespread happiness. And Atlanta, his finest and most influential creation to date, is arguably cable television’s most critically praised program.

And now there’s Redbone, the second single from Gambino’s Awaken. Its infectious replay value stands out in a time where songs and projects come and go with relative abruptness. Produced by Gambino, Vinylz (Anderson Hernandez), and Ludwig Göransson, and clocking in at just over five minutes, the methodically slow tune is trippy, a near perfect homage to the sounds Bootsy Collins and Prince — and OutKast and Organized Noize — mastered and built on. Glover credits the sound of his new Gambino album to the music — The Isley Brothers, Parliament-Funkadelic — of his father’s era.

“It felt like people were trying to get out of their minds, with all the things that were happening — and that are happening right now,” Glover told Billboard. “How do you start a global revolution, really? Is that possible with the systems we’ve set up? There’s something about that black ’70s music that felt like they were trying to start a revolution.”

Redbone is an odd combination of sexuality (without saying anything overtly sexual) and spirituality, an impressive follow-up to Gambino’s already groovy first single Me and Your Mama. You better believe in something, Gambino commands on the Redbone hook, We can make it / If you want it / You can have it. It’s a message germane to the current landscape, yet perhaps an unintentional tip of the cap to Big Boi and Andre 3000’s 1994 classic Git Up, Git Out, which lived by much of the same creed. But stay woke, Gambino warns, N— creepin’ / They gon’ find you/ Gon’ catch you sleepin’.

It’s nearly a cliché at this point to describe a record as easy “to get lost in,” but Redbone encourages just that. Almost as if you can envision Earn, Paper Boi and Darius — Atlanta’s three main characters — chain-smoking blunt after blunt, plotting their next moves with Redbone as the closing scene’s soundtrack.

Where Glover’s music dips into the sexual, psychedelic, and sociopolitical realms, Mars’ 24K Magic is a reminder of something lost all too often in life.

It’s OK to go out with friends on the weekend and hilariously recap everything via group chats while still being concerned about and acting on the Flint, Michigan, water crisis. It’s OK to laugh at Obama/Biden memes or hooded Kermit memes while still feeling a way about the historical irony that while celebrating Thanksgiving last week Native Americans were still being treated as second-class citizens at the Standing Rock Sioux Reservation in North Dakota — and not like this country’s original inhabitants. It’s OK to plan a trip abroad and experience new cultures while still focusing on the unavoidable reality that is police brutality at home.

The point is, It’s still OK to have fun. It’s OK to have a good time. At times, it’s the only outlet that will keep us sane. Despite the daily stresses that come with getting out of bed each morning, it’s OK to love life while not losing sight of the issues of the day. And it’s OK to allow music to carry that burden. It’s OK to dance and vibe to Bruno Mars.

A smorgasbord of pop likely created over this last crazy year, synths and soundwise, 24K Magic doesn’t stray from the formula that’s made Mars an international superstar. Born Peter Hernandez in Honolulu, the world’s most famous Hawaiian not named Obama doubles down on his recipe and calls to mind five distinct thoughts.

Just like that, though — nine songs tallying 33 minutes — the album ends nearly as quickly as it kicks off. And maybe that’s life in 2016-17: Happiness has a short life expectancy.

Mars and Glover couldn’t have completely envisioned the landscape their music would live in during the late nights of studio sessions that brought their respective projects to life. On April 3, 1968, Simone had no way of realizing the studio session she found herself in days later would, either. She never asked to voice the pain of an entire race in one of its darkest hours of the 20th century. A visibly weary King spoke at the Church of God in Christ headquarters in Memphis, Tennessee, the night before taking a bullet to the neck on the balcony of the Lorraine Motel. It was here the most recognizable black man in America delivered the most prophetic speech of his life. His own eulogy, in many ways.

“… The world is all messed up. The nation is sick,” King said. “Trouble is in the land; confusion all around. That’s a strange statement. But I know, somehow, that only when it is dark enough can you see the stars. And I see God working in this period of the 20th century in a way that men, in some strange way, are responding. Something is happening in our world.”

During times of collective chaos, art is called upon, even more than usually, to illuminate. Stay woke, Gambino commands on Redbone. Stay woke. He isn’t the first. And surely won’t be the last preaching the same.