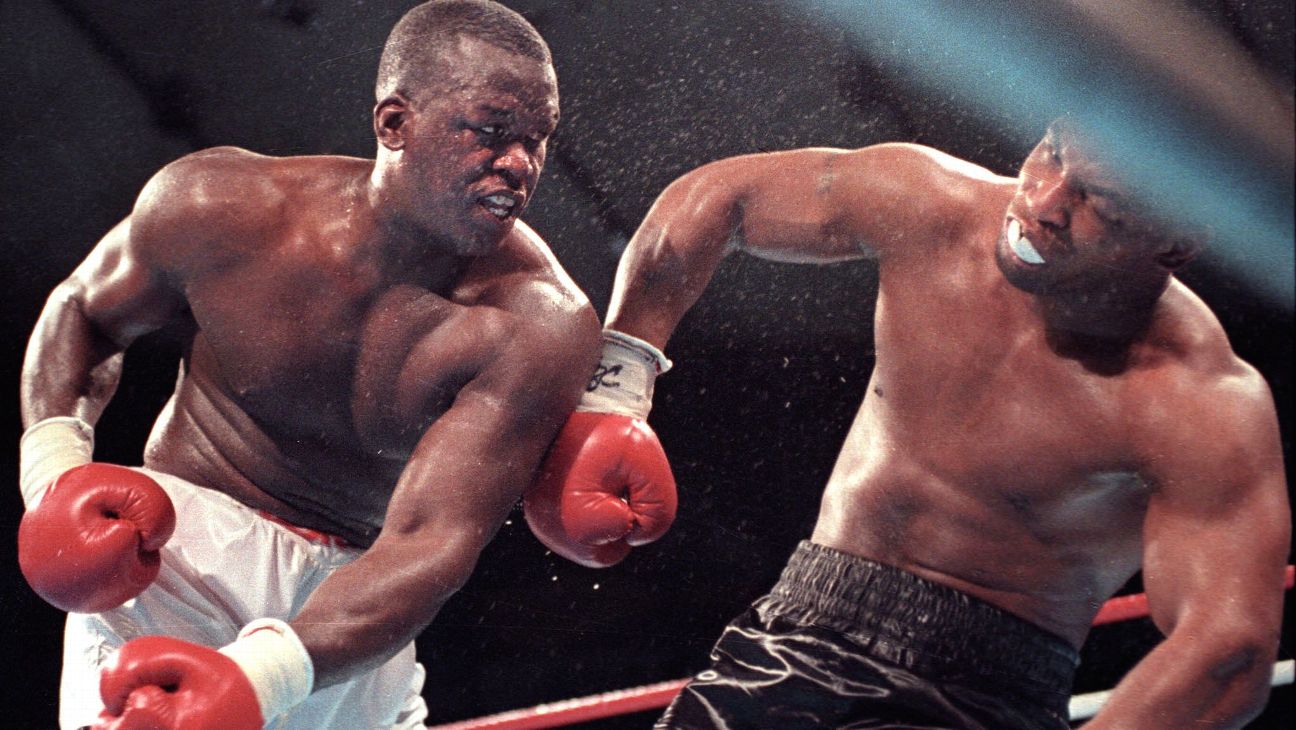 Masaharu Hatano/Reuters
Playing For Something

Buster Douglas: I wasn’t impressed with the success Mike Tyson was having

When Douglas knocked out Tyson, he was fighting for more than just a win

In this installment of Playing for Something, Buster Douglas, as told to The Undefeated’s Kelley Evans, opens up about his mother and how she motivated him in his fight with Mike Tyson, who was heavyweight champion of the world and unbeaten in 37 fights. Oddsmakers in Las Vegas gave Douglas 42-1 odds of beating Tyson.

(ESPN Films’ new 30 for 30 documentary, 42 to 1, about Douglas’ epic 1990 defeat of Tyson for the heavyweight championship of the world, premieres Tuesday at 9 p.m. EST on ESPN.)

My mother slammed me on the ground, put her knee in my chest, and said, ‘If you don’t get out there and fight that boy, you’re going to have to fight me.’

My mother, Lula Pearl Douglas, was my motivator. At 10 or 11 years old, she made me go out there and face that bully, and when I came into the house crying, she jumped on me bad. It was, like, the next day I went outside, and we were shooting basketball. I called a foul. The bully was like, ‘What?’ And I turned around and said, ‘Foul!’ And I was looking at him, fists all balled up, and he just gave me the ball. Ever since then, he never said anything else to me.

She was my world — my rock. That’s how she was with me and my brothers.

She died three weeks before my fight against Mike Tyson on Feb. 11, 1990, a day that marked my sporting life. That was my pinnacle. On that day, I was the best. I couldn’t have asked for anything more. I was blessed with the opportunity and I conquered. If you had to say, ‘This is how I want to be remembered, how I want people to know me, to look at me,’ it’s as a gentleman, a kind man who believes in himself, a humble guy who had an opportunity and took advantage of it.

But the person who motivated me was my mother. She visited me the week before she died on Jan. 18, 1990, to check on me as I was preparing for the fight. She was really ill at that time — I didn’t know how ill, but she mustered enough strength to get in her car and drive over to my house and ask me a few questions to see where my head was at. She was 46 years old, I was 29. It would have just been devastating, knowing that I was unable to continue because of her passing, but it just built my strength even more, in a sense.

Fighting Mike was a relief. I was like, ‘Man, I’ve got so much s— pent up in me, this is your a–.’ I mean, really, I was just at that point to where I could give a hoot about the naysayers. In my mind, I was getting ready to be a nightmare to him.

Make no mistake, I knew that if you weren’t bending steel or eating mercury, you had no chance against that man. But I knew what I could do.

The thing about Mike is he’s not a trash-talker. He was a man of few words. I remember a reporter asking him how he thought the fight would go. He said the fight would be like any other fight — something like, ‘I’m going to knock him out,’ or whatever. Short and sweet.

I went into the fight with a lot of confidence, and I wanted to express that. Everyone was expecting a quick, 90-second knockout, but I’m well-educated in this game. I knew what I was doing. I knew nobody gave me this opportunity; I had earned it. I fought killers to get this opportunity. Fighters who I figured would beat me, guys who lost their careers, I ended up beating and turning everything around to get a shot at the title. Even with all of that, I still wasn’t getting any respect because Mike Tyson was just a god.

“I knew it was over. He wasn’t even in the fight at that point — he was sleeping.”

When I went down late in the eighth round, I knew exactly why it happened. I got caught standing square, standing right up in front of him. That was the one time he really got me. I was angry and motivated — at the same time. I was pissed because I got caught looking. He caught me with one of those hooks, uppercuts. I hit the canvas like, ‘F—!’ When he knocked me down, I wanted to look at him, take a moment and say: ‘Come on, Mike. What do you think about this?’

I got caught because of that brief moment of reflection, when I stopped fighting. He was showing me that he was still alive. But I got up.

More from The Undefeated

I knew I had to get serious after that. I dominated the ninth round and gave him a swollen left eye. Then that 10th round came, when I dropped him at one minute and 22 seconds into the round. When Mike didn’t get up, I knew I had him. I knew I had won, because when he reached for his mouthpiece, I knew he was incoherent. If he would have been coherent, he would have just gotten up, let the referee get the mouthpiece and extend the count. But when he reached for it, I knew he was hurt then. That’s when I raised my hands. I knew it was over. He wasn’t even in the fight at that point — he was sleeping.

When Tyson and promoter Don King complained about the referee’s count at the end of the eighth round, I didn’t feel disrespect, I just felt like they were crying like babies. I looked beyond all of that and realized that it was just some force trying to stop me from obtaining my goal. I knew then that I was on the right track of succeeding at my childhood dream, which started when I was 10, when my father started me in boxing.