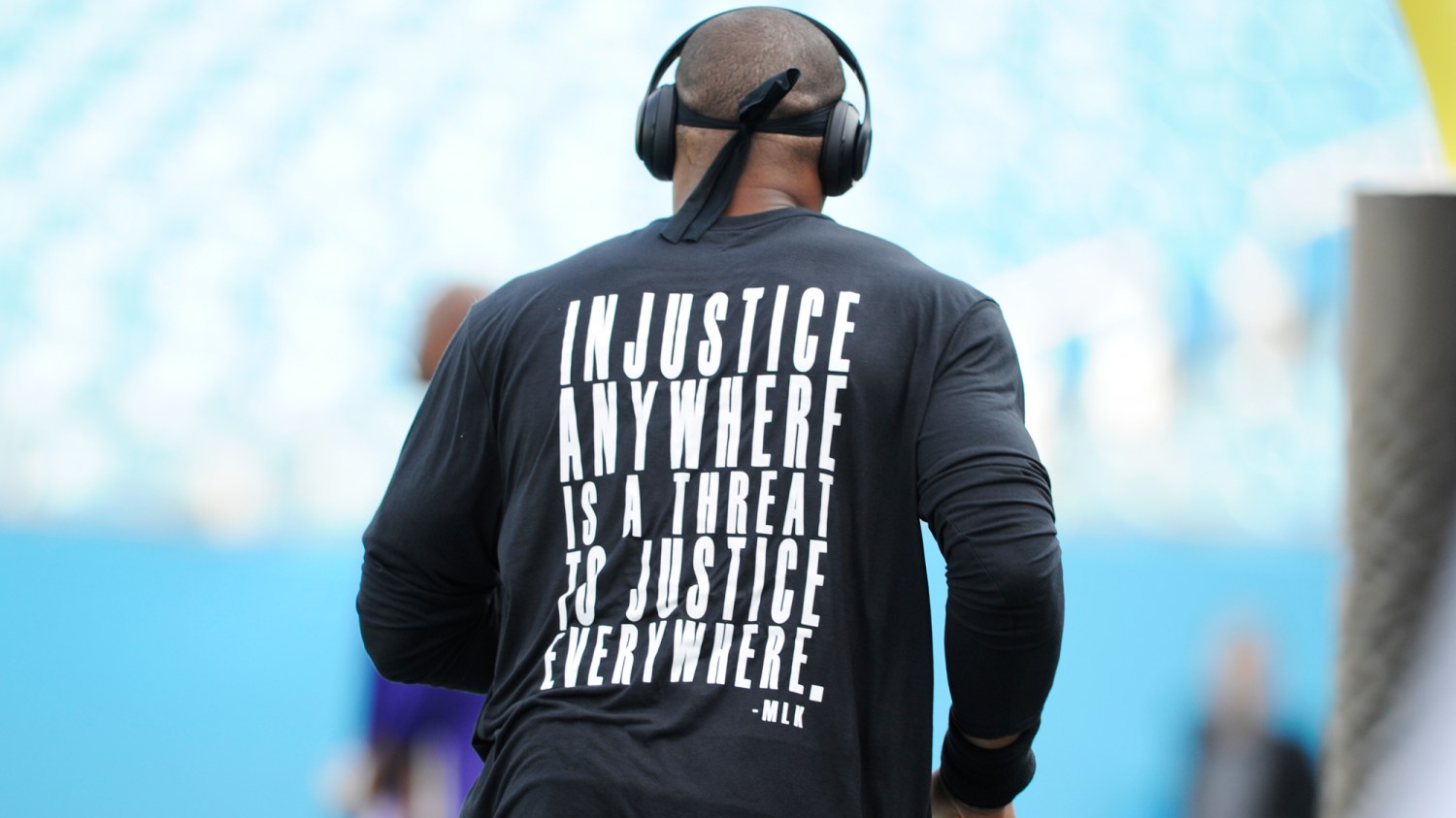 It was Cam Newton’s strongest fashion statement yet – and one that needed no explanation. Known for his bold postgame outfits, the Carolina Panthers’ stylish superstar quarterback made news before last week’s loss to the Minnesota Vikings. By wearing a warm-up shirt adorned with a Martin Luther King Jr. quote – “Injustice anywhere is a threat to justice everywhere” – Newton shouted his position on the social unrest in Charlotte, North Carolina. He did what he believed he needed to do.

“It was just so fitting for what was going on,” Newton said Wednesday during a news conference at Charlotte’s Bank of America Stadium. “I want to bring awareness to everyone about holding each other accountable [and] doing the right thing. No matter who it is. No matter the age. No matter the race. No matter the gender. It doesn’t matter.”

Newton’s message resonated throughout the nation following one of the most tumultuous weeks in the Queen City’s history. The fatal shooting of Keith Lamont Scott – yet another African-American man whose slaying at the hands of police ignited outrage in the black community – sparked violent protests near the team’s stadium. Panthers players joined in the discussion about the troubling situation that prompted Charlotte and the state of North Carolina to institute states of emergency, which were lifted Wednesday after about a week. While Newton made headlines wearing his shirt before the matchup against the Vikings, a peaceful protest occurred outside the stadium. And as Charlotte attempts to move forward, the Panthers also must get it together on the field.

At 1-2, the defending NFC champions have issues, their inability to protect Newton chief among them. The reigning NFL MVP has been battered like a piñata – through three games, no quarterback has been hit more – and the offense has sputtered because of the problem as much as you would think. For the Panthers, however, there are two pieces of good news: It’s still early, and they play in the NFC South.

Remember, this is the division that Carolina, the three-time defending South champion, won in 2014 at only 7-8-1. Although a sub-.500 record most likely won’t be good enough to finish atop the division this season, the point is that everyone in the Panthers’ neighborhood is trying to keep up with them.

Beginning with Sunday’s road game at Atlanta, Carolina begins a three-week run against the rest of the division. The Panthers could get themselves right in a hurry. But after the pain of last week, are their heads in the game? The Panthers were immersed in the turmoil. How could they not be?

They spent most of the week answering questions that had nothing to do with what happens between the hashmarks. Like all Charlotte residents, players worried about the safety of their families amid a citywide curfew that was lifted a few days ago. From their first day in youth football, players are taught to block out distractions. Focus on the game, coaches say. Of course, players are human.

“The tension in the city was so tight,” fullback Mike Tolbert told me after practice the other day. “I didn’t want my wife out in all of this. You think about it. When it’s 4:30 in the afternoon and we’re at home, we’re looking at the news like everyone else. We’re seeing what’s happening. We feel bad about what’s happening.

“We’re thinking about everything that’s happening. We’re trying to deal with it. But, yeah, you’re thinking about the fact that we can’t go out to dinner [because of the curfew], that we’re not going to let our kids go to school because there are gonna be protests on the road. If anyone says it was just like usual [inside the locker room], they’d be lying.”

In a 22-10 loss to the Vikings, the Panthers’ offensive players often appeared as if their minds were elsewhere. Minnesota had eight sacks and hit Newton 12 times. The Panthers and Cincinnati Bengals have each given up 12 sacks – tied for worst in the league. According to ESPN Stats & Information, Newton has been sacked, hit while throwing or hit while rushing 17 times more than any other quarterback. That helps explain why Newton currently ranks 23rd out of 31 qualifiers in Total Quarterback Rating (QBR). Last fall, Newton finished 12th in Total QBR.

You couldn’t blame them for being in a fog last week. Still, the Panthers “had a job to do,” wide receiver Ted Ginn Jr. told me. “When it’s time to work, you’ve got to work. We hate what was going on in Charlotte. But you can’t blame outside [factors] for your performance.”

Predictably, the Panthers circled the wagons. Good teams do that in trying times. The protection problems aren’t on the offensive line alone, players said, which is true. A number of variables (how long a quarterback holds the ball, the types of routes receivers run, and how well they run them) contribute to a team’s overall effectiveness in pass pro.

Newton would be the first to say he has a major role in the key process. Again Wednesday, he stepped up to protect the guys entrusted to protect him. “Pressure recognition and just getting the ball out of my hands,” Newton said. “That’s what it all comes down to.”

Even when the ball leaves Newton’s hands, though, the results haven’t been great. In 495 pass attempts a season ago, Newton only threw 10 interceptions. Through his first 108 attempts this season, he already has five.

Newton is concerned about the perception that the Panthers are a mess. Uneasy lies the head and all. “It’s not that we didn’t have any mistakes that happened last year, because we had a lot of mistakes,” Newton said. “The fact that we were winning kind of blew it under the rug. Now, we’re 1-2. It feels like we can’t get into a rhythm of winning. A lot of things have been magnified, from the protection to the errant throws.”

As a rookie in 2014, Benjamin was on the fast track to stardom, coaches around the league said, after catching 73 passes for 1,008 yards and nine touchdowns. Then he missed all of last season because of a knee injury. Back and fully recovered, Benjamin got off to a great start in the first two games, racking up 13 receptions for 199 yards and three touchdowns. And then last week, zip: Targeted only once, Benjamin was shut out.

“That can’t happen,” Newton said. “And if I’m speaking for it, that won’t happen again. “He’s too good of a player.”

The same could be said about Newton. He’s too talented to struggle all season. The more likely outcome is that Panthers get it figured out up front, Newton gets into a groove and the rest of the NFC South winds up battling for second place again. Warren Moon wouldn’t be surprised if it went down that way.

In his role as an adviser to Newton, the Hall of Famer keeps up on what’s going on with the Panthers. The Panthers will make the necessary tweaks in their offense, Moon believes. He’s far more concerned about the emotional wear and tear on Newton after last week’s unrest.

“You saw him come out with the shirt. That’s because he feels the pressure that he has to say something. It shows you that that’s on his mind. It shows you that that’s something he’s always conscious of,” Moon said on the phone. “But Cam is an emotional player, too. I don’t know if Cam can separate the emotion of what’s going on in Charlotte, and then go out there on that football field and compartmentalize everything. With what’s going on outside that stadium, I don’t know if he can … and then go right back to playing football.”

Newton will do the best he can. As the face of the Panthers, he must.

“I’m affiliated with this community. I care about it,” Newton said. “I actually live in Charlotte. When certain things happen … I’m still a human being [who] resides in Charlotte. That’s bigger than football.”

Newton understands that much is expected of him in Charlotte. And you get the sense that he wants to deliver.